You've heard the saying before -- stars, they're just like us. Well, this goes for vacationing, too. When it comes to taking time off, celebs tend to head to secluded properties that are tucked away from the paparazzi and boast over-the-top amenities, like dreamy infinity pools and top-notch dining options. If this sounds like your kind of vacation -- or if you simply want a glimpse into the high life -- slap on your Chanel sunglasses and jet off to one of these luxurious, celebrity-approved Caribbean resorts. The getaways range from a private island 30 miles off the mainland to a resort with one of the world's most exclusive golf courses, but they all have one thing in common: a star-studded guest list. Check in -- and keep your eyes peeled for any celebrity sightings.

Located in Willemstad, Curacao, this 23-room boutique hotel has attracted the cream of the NBA and Hollywood crop. Gabrielle Union and Dwyane Wade spent a romantic Valentine’s Day weekend here, and Brazilian singer Ivete Sangalo has made it her second home. But why wouldn’t they — after all, the Balinese-inspired property offers the chance to get cozy underneath a Banyan tree and amid flickering candles lit throughout the grounds. Elegant villas — some with private pools — hand-carved teakwood detailing in rooms, gift bags left on the beds, and a stretch of pristine beach will cause even non-celebs to go starry-eyed. Achieve inner peace — at least for a few days — at the Hindu shrine or with Indonesian-style footbaths that sit near every door.

With 64 posh suites (some with private pools) dotting a quarter-mile of beachfront, Spice Island Beach Resort in Grenada is exactly where a celeb wants to be. The resort is located smack dab on the popular Grande Anse beach — about 15 minutes away from the quaint and historic capital city of St. George’s. And yet the tranquil, manicured grounds give off a feeling of absolute peace and privacy. Recent celeb visitors have included “The View” host Sherri Shepherd and Britain’s Princess Anne. But you don’t have to be famous to grab some Creole cuisine and other tasty dishes at Oliver’s or the Sea and Surf Terrace & Bar, or get a rubdown with local herbs and spices at the spa.

Vin Diesel, Beyonce, A-Rod, and Michael Jackson are just some of the big names that have called Casa de Campo, the world-class resort in the Dominican Republic, their temporary home away from home. The 7,000-acre complex is more like a small city, with all you need within arm’s reach. Guests will find everything from a beach and marina to horse stables and a skeet shooting range at the 454-room property. In fact, it’s so big that you’ll need your own golf cart to get around. But don’t worry — that’s covered. And if that’s not enough, the dozens of restaurants, including an outpost of the famous Le Cirque, plus a full-service spa will have you feeling like a VIP in no time.

This 112-room resort in Barbados attracts VIPs from celebrities to dignitaries (Tiger Woods was married here), so expect a see-and-be-seen feel. Channel your inner Tiger by teeing up at one of the three golf courses, including the super-exclusive Green Monkey, which has been carved from an old limestone quarry. Reservations for the Green Monkey must be made far in advance, as there are limited tee times per day. Enjoy some hydrotherapy at the spa or get misted with Evian by the beach before watching the sunset while dining at L’Acajou. Who knows — you might even be lucky enough to stop David and Victoria Beckham, Rihanna, or Gwyneth Paltrow enjoying some R&R.

The island of St. Martin is usually teeming with tourists, but if you happen to be famous and want to hide from those pesky crowds, it’s got options, too. Some of the biggest names, including Oprah Winfrey and Jackie O, have checked in at the 55-acre, 81-room, eight-villa La Samanna. It’s got a European-style spa, wine cellar jam-packed with vino from around the world, and Moroccan-themed Baie Longue Bar. And with top-notch security (there are a number of secure gates), you’ll be able to sunbathe in absolute privacy on the beach, at the bar, or while getting a body scrub or massage at the Elysee Spa.

Celebs are notorious for protecting their privacy, and there’s no better place to go incognito than at a 1,000-acre resort on a private island. You can only each COMO Parrot Cay via a 30-minute boat ride from Providenciales. And with three miles of tranquil beaches, an infinity edge pool, and Balinese-style villas, the resort drips with romance. As if that weren’t luxurious enough, celebs like Donna Karan, Bruce Willis, and Keith Richards each own private villas and decorate them according to their own impeccable tastes. Celeb appeal aside, the resort’s COMO Shambhala Spa is the major draw for many guests. A world-renowned sanctuary, COMO Shambhala focuses on holistic therapies like reflexology and Ayurveda, as well as massages and facial treatments.

Private, in-room steam rooms (some with an outdoor Jacuzzi) and proximity to Frenchman’s Cove, one of the world’s most beautiful beaches, are just a few of the reasons why the exclusive Geejam has lured celebrities like Gwen Stefani, Sharon Stone, Bjork, and Grace Jones. The hotel is made up of only five private, high-tech cottages on the lush foothills of Port Antonio. Holding to the resort’s past as a recording studio, each room is named after a phase in Jamaican music (Ska, Sandwood, Rockstead, Mento, and Drum and Bass). It’s designed to offer privacy above all else — there’s no communal pool and no direct beach access, and guests often take all their meals in their individual cabins, each fenced off from the common pathways. So, while it does bring in a fair share of celebrities, you’re not likely to spot a famous face, given its overwhelmingly private nature.

Pricing for The Ocean Club, A Four Seasons Resort, Bahamas

This is called One&Only for good reason — there’s nothing quite like it on Paradise Island, or anywhere in the Bahamas for that matter. It’s no wonder that A-list celebs like Jay-Z, Beyonce, Kerry Washington, and Angela Bassett gravitate toward the property. Play a round at the 18-hole golf course, have a friendly match on the tennis courts, break a sweat at the indoor/outdoor fitness center, or take it all in at the manicured garden terrace that was inspired by the Versailles in France. Treat yourself to a hot stone massage at the Balinese-style spa or a tasty meal at Jean-Georges Vongerichten’s Dune restaurant. It’s so ridiculously romantic that supermodel Cindy Crawford spent her wedding night here.

In 2010, pregnant “Real Housewives” star Bethenny Frankel and then-hubby Jason Hoppy headed to this beautiful resort for their honeymoon. While visiting, they may have spotted fellow celebs like Steve Martin and Jimmy Buffet, who hang out at their second (or third homes) here when they’re not touring the globe. With 75 rooms and separate cottages, celebs and non-celebs can veg out with flat-screen TVs in the room or exercise poolside, on the tennis courts, or in the fitness center. Then, beautify at the top-notch Clarins spa and Frederic Fekkai salon before chowing down at one of the on-site dining options, which include two upscale restaurants and a beachside restaurant and bar.

TV personality Vanessa and singer Nick Lachey are busy, but they managed to sneak in a little couple time at the truly isolated Jade Mountain Resort on St. Lucia. The couple retreated here back in 2012 when Vanessa was pregnant with their first baby. After all, once baby arrives, it’s hard to get a moment of peace. Luckily, peace is one thing architect Nick Troubetzkoy had in mind when he designed this place. Each of the 29 guest rooms shares the stunning view beyond its missing “fourth wall,” and no kids under the age of 16 are allowed. And with no TVs or radios, it’s pretty much mandatory to unplug for a little while. Infinity pools, organic cuisine, daily yoga classes, and proximity to beaches and a dive center round out the resort’s appeal. In addition to the Lacheys, late singer Amy Winehouse also retreated here. 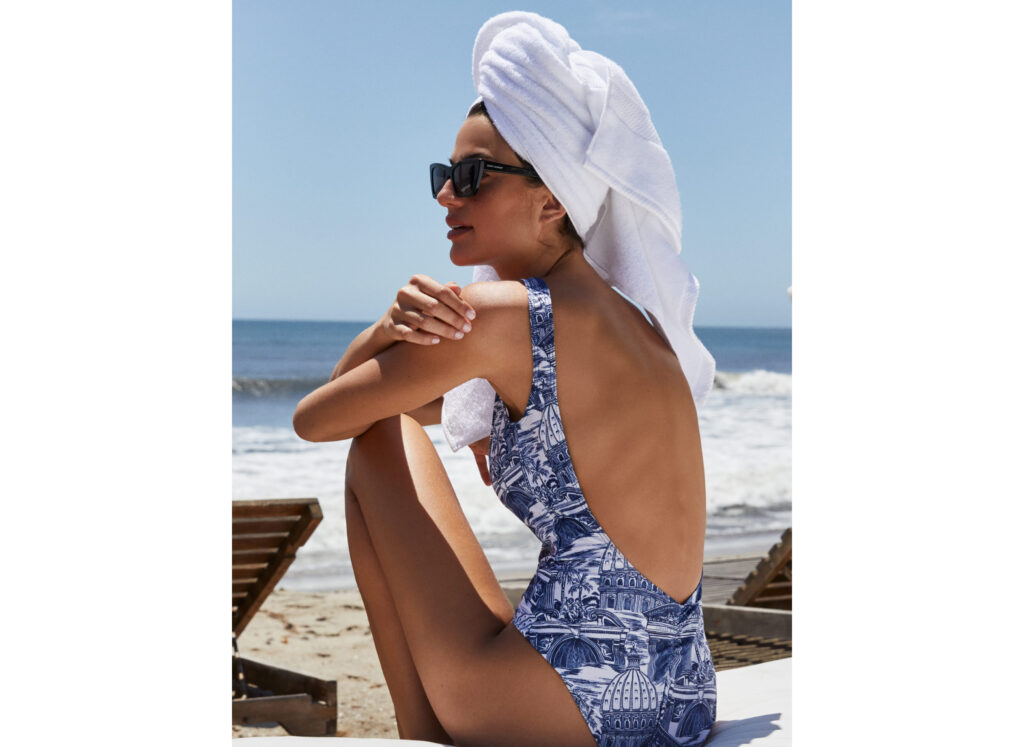 Topanga One Piece by Reformation

Look the part at a glam celebrity resort with a swimsuit from Reformation.