Considering longer-than-long security lines, baggage check fees, and prickly customer service, it can be hard to imagine that people once looked forward to flying. But in the early 60s, catching a big metal bird was a romantic notion that few people, outside of the wealthy or business-minded, actually got to experience. If you ever caught an episode of the short-lived ABC series "Pan Am," you would see that the high-flying life of flight attendants equated to a romanticized, coveted, and respected career, even making a somewhat celebrity status. (Yes, the series was at least historically accurate about that point.)

Cut to today, and most people would opt out of the "more complaints than compliments" job of storing your bags, handing out your meals and headphones, and oh, keeping hundreds of strangers safe on a large object flying through the sky. In fact, being a flight attendant consistently ranks among the worst-rated jobs.

We wanted to know what we didn't know about the often misunderstood job of being a flight attendant in today's travel world. So we headed straight for the source. A former flight attendant, Annie Kingston, dished the good, the bad, and the ugly on exactly what it means to be a steward of the sky. And you know what? Respect.

Here are 14 things that will change your view on the career forever.

1. They Aren’t Just There To Serve You Snacks and Drinks

We found that the most misunderstood bit about being a flight attendant is exactly what a flight attendant is. Annie says that the biggest misconception that people make about flight attendants is considering them as “just waitresses in the sky.” Sure, that’s part of the gig, but next time you are constantly dinging your overhead bell, keep in mind that the real reason a flight attendant is on board isn’t to be your person waiter, but to keep you safe. Yes, imagine how stressful it must be to know you are responsible for a plane full of jet-lagged, hungry, cranky, and sometimes drunk passengers’ lives. But that doesn’t mean they aren’t happy to help. “While I really don’t mind giving you a double vodka or finding you an extra meal,” Annie says, “what I really want is for nothing seriously terrifying to happen to any of us while we are on board.” We’ll drink to that!

2. They Have to Abide by Strict Rules on Their Appearance

For anyone who has lamented having to wear business attire to work instead of those comfy jeans and T-shirt combinations, consider that flight attendants not only have standard uniforms, but, as Annie notes, many — especially in the Middle East and Asia, where appearance is everything — are also given “strict rules on how you can keep, color, and style your hair and makeup. Nails must be painted a certain way, and jewelry kept to a standard minimum.”

Taking it even further, Annie tells us that the rules and regulations on appearance don’t stop at clothes and accessories. Some airlines have weight and body-fat ratios that their flight attendants must adhere to, which we think sounds a bit offensive — let alone hard to follow when you are constantly on the go. We know we tend to eat worse when we travel. Regardless, Annie admits “the reality is that you’re weighed once a year and must have a healthy BMI.”

4. They Are Responsible for Your Life

Tying things back to number one, Annie tells us that “one thing you really don’t understand about being a flight attendant, until you’ve become one, is that you’re about to join a team of people responsible for taking care of 300-plus lives at 35,000 feet.” So, it sounds like it’s not just the passengers who have a slightly warped reality of what the flight attendant’s main purpose is. The fact that these men and women are responsible for your safety — and could possibly save your life — well, that’s one big reason to be sweet to your airline staff.

5. They Are Trained to Deliver Babies on Board

If baby delivery isn’t enough to wow you, perhaps the hand-to-hand combat your flight attendant is skilled in may do the trick? Considering that it’s most likely relied upon when dealing with unruly passengers or hijacking situations, we hope we never have to see our flight attendants go Chuck Norris on anyone — but we are sure glad they know how.

7. They Know How to Survive in Extreme Conditions

Maybe you aren’t as big of aviation nerds as us, but if you’ve seen “Alive,” the true story about the survivors of the 1972 plane crash into the Andes mountains, you know why having someone like Bear Grills on your side is key. Surviving the plane crash was only half the battle; the Andes are a snow-capped mountain range that leaves little for food (ahem) and really tests your survival skills. Don’t have any? Don’t worry, your flight attendant has been trained to handle themselves and the passengers in extreme conditions.

Did we mention that extreme conditions also means inside the plane? Amazingly, your friendly flight attendant is also trained to fight fire, inside the plane, at 35,000 feet in the air. We imagine this may have been more of a threat back in the dreamy 60s when you could actually smoke on a plane, but given all the weird things that seem to go wrong in the cabin, we wouldn’t doubt an electrical fire or two happens. It makes you wonder how many things happen behind the scenes that we never know about in the cabin.

9. They Are Sick of Hearing about the “Mile High Club”

If you think you’re being funny bringing up the Mile High Club to a flight attendant, you’re wrong. It’s insulting. Annie puts it to you straight: “To be honest, it’s a really tacky topic that makes us roll our eyes and think less of you as it’s not something that you would ever ask any other professional — ever — when they tell you what it is they do.”

10. Your Flight Crew Is Often Flying Together for the First Time

It may not seem obvious in flight, but flight attendants often work with a constantly rotating group of co-crew. For example, Annie’s company had over 35,000 flight attendants flying to over 130 destinations in 70+ countries, “so,” she says, “you had to be good at making friends fast, saying goodbye, and getting over both minor and major cultural differences.” Spoken like a true travel-lover, if we say so ourselves.

11. They Come from All Walks of Life

Maybe it’s the uniforms, but it’s easy to think that since all flight attendants look alike they have some similar background in common. In fact, it’s a highly diverse group of people up there in the sky with you. “Many of my colleagues left their countries to work in the Middle East in order to escape depressing job markets, violent cities, civil wars, and extreme poverty,” Annie tells us. But she also added that, “Many of my colleagues were also lawyers, teachers, doctors, and other working professionals.” So they may be from different backgrounds, but they actually do have something in common apart from the spiffy uniforms; they are all people who “just saw a once-in-a-lifetime opportunity and ran with it.”

12. They’re Not Immune to Jetlag

If you think your flight from San Francisco to Tokyo puts a kink in your sleep cycle, imagine zigzagging across the globe nearly every day. Not only that, but also dealing with having the cabin lights dimming during daylight. It’s a miracle that the flight crew is still standing after a few long-haul shifts! Sure, flight attendants on these long flights have bunks where they can nap it off, but it doesn’t mean they are free from jetlag. In fact, Annie says that sometimes crew use their days off to catch up on sleep and time changes.

13. They Often Double As Ticketing Agents (And No, They Can’t Always Throw You a Bone)

Ever think you’ve seen your flight attendant somewhere before? Chances are they checked you in. Several airlines have flight attendants working at the gate of their flights before takeoff, so remember this as you are arguing about seat upgrades and delays. And while we’re on the subject, we asked Annie how much pull gate agents actually have to give you upgrades or other perks. “It really depends on the airline,” she says. But on board, flight attendants have full reign (almost) over what bonuses they dole out — which is why you should pay sharp attention to the last point on our list.

In an article written for Matador Network, Annie dished, “I always give better seats, meal preferences, double drinks, and a selection of limited stocked complimentary items to the passengers who treated me like a fellow human being.”

You can find Annie Kingston telling her travel tales on her blog Catch Me If You Cannie.

What to Bring on Your Next Flight: Cozy Wrap 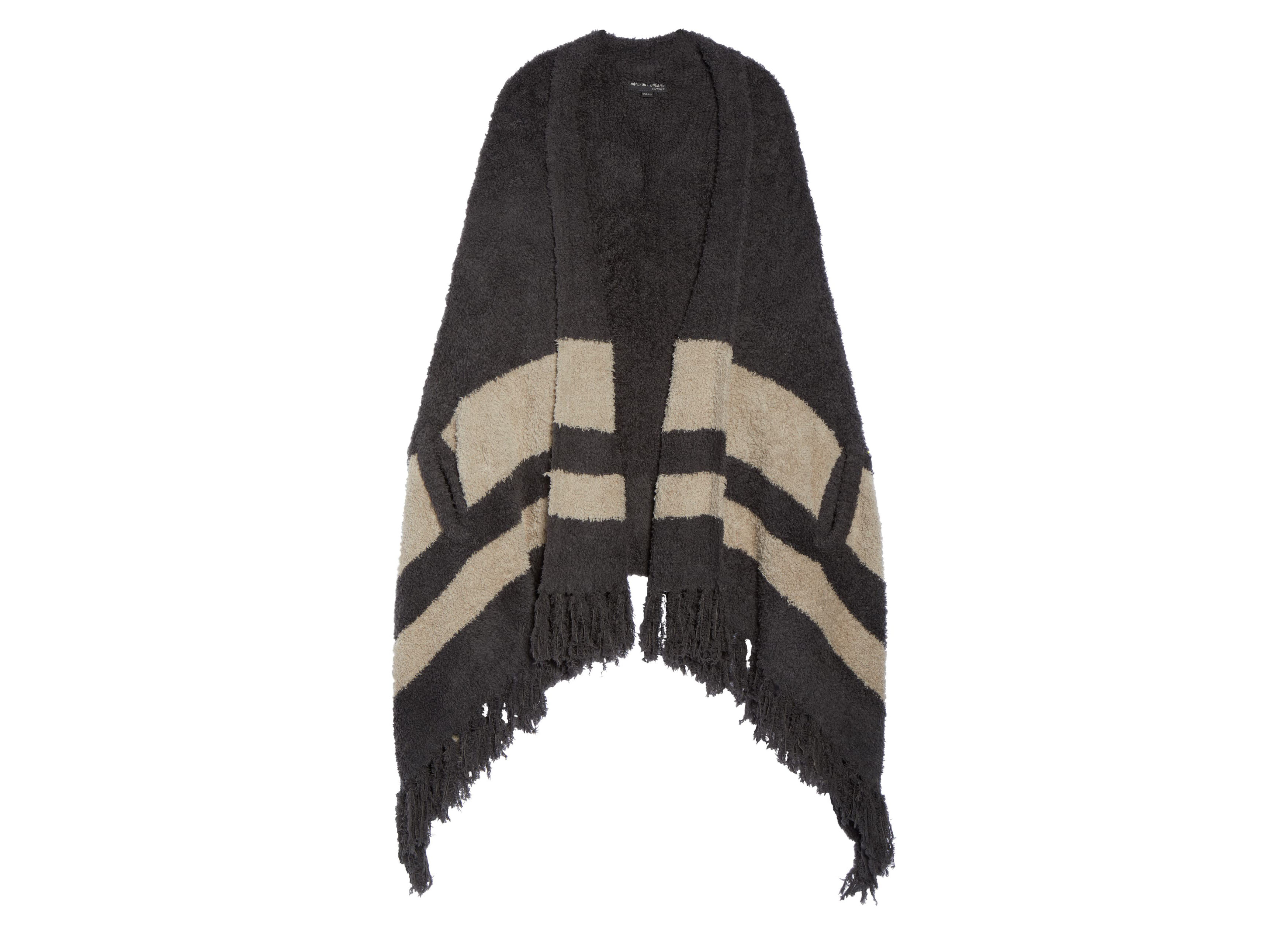 Make your next flight a comfortable one by packing a warm, plush shawl in your carry-on.