Belize is a tiny Central American country with Caribbean coast and cayes that pack in a whole lot of fun for visitors. From diving in the Great Blue Hole to visiting Maya sites like Altun Ha and everything from paddleboarding to rain forest trekking in between, Belize is way more than just a typical cruise ship stop. But is Belize safe to visit? Belize's murder rate is extremely high at 44 homicides per 100,000 people, and a state of emergency due to crime was declared in 2018. But, there's good news for tourists. Most violence in Belize is related to gangs and drug trafficking in parts of Belize City. The best way to stay safe and enjoy Belize is to educate yourself on where the risks are, and then get back to exploring the rain forests, cayes, coastlines.

Here are 8 things about Belize that you need to know before you book a trip.

Belize Safety: Where Tourists Should Not Go in Belize 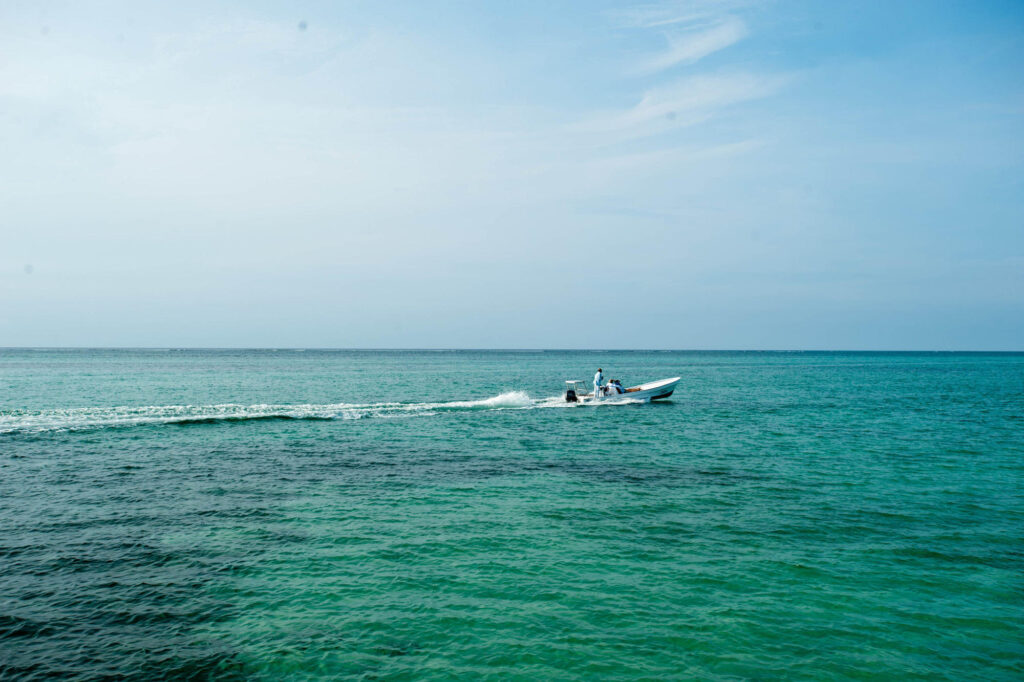 Pier at the Grand Caribe Belize/Oyster

As of 2019 (the latest update at time of publishing this article in 2020), Belize has a level-two travel advisory from the U.S. State Department. For some perspective, that’s on par with France, Italy, the Dominican Republic, and Denmark. What does level-two mean? Simply that the U.S. government urges tourists and state employees in Belize to exercise increased caution. Tourists should avoid Belize City, specifically on the south side, where the Belize government declared a state of emergency in 2018, due to gang violence and crime. In better news, that specific security threat has passed and most tourists don’t spend any time in Belize City. If they do, it’s to get to the highly patrolled Municipal Airport or ferry landing (for small flights and speed boats out to the cayes) in the north and eastern section of Belize City.

Outside of Belize City, violent crime does impact tourists and ex-pats throughout the country. Local police don’t have the training or resources to respond quickly to criminal reports. Most crimes remain unresolved.

Common Types of Crime in Belize

Belize has a population of almost 400,000, and its murder rate is extremely high at 44 homicides per 100,000 people. This consistently puts it in the top five (fourth in 2019) countries with the most murder cases per capita. Violent crime does occasionally impact tourists and ex-pats living in Belize. Sexual assault, home invasions, armed robberies, and murders do happen, though most of this activity is gang and drug trafficking related. More minor crimes include pickpocketing and sexual harassment. Cash theft and credit card fraud are prevalent around San Pedro.

LGBTQ travelers should note that the Belizean government decriminalized homosexuality in 2016, but there continues to be hostility towards individuals (especially men) who openly identify themselves as LGBTQ. Tourist-friendly areas, including San Pedro Town and Ambergris Caye remain relatively open and welcoming to the community. Outside of tourist areas, men have reported incidents of verbal or physical assault for openly displaying their sexuality.

Tips for Staying Safe in Belize 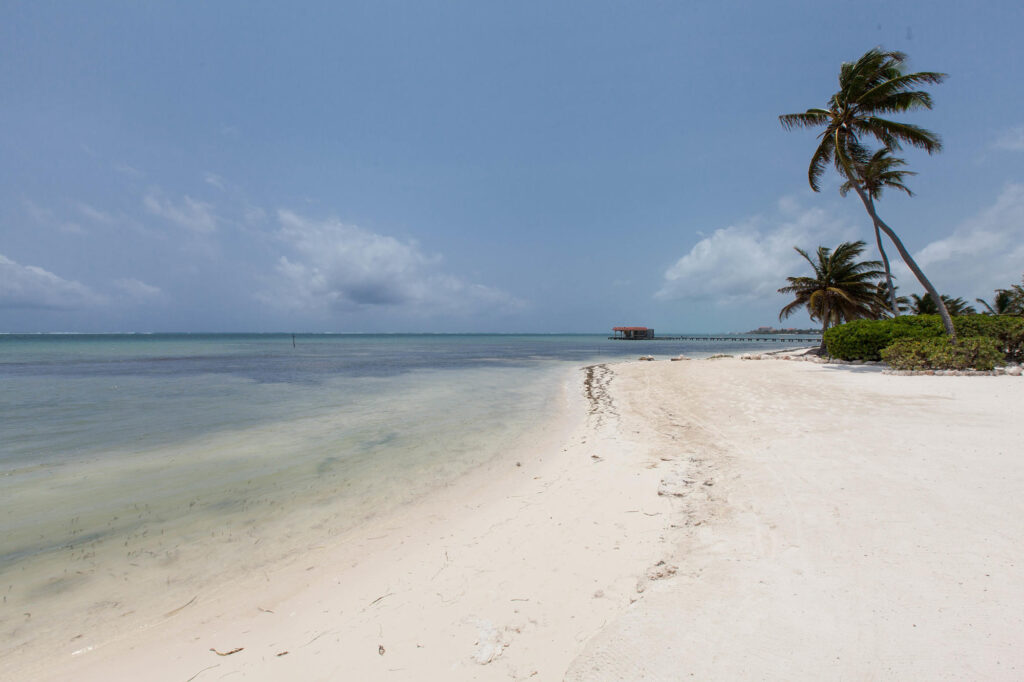 Beach at the Coco Beach Resort/Oyster

Most visitors to Belize leave the country without encountering any crime or safety incidents. But that doesn’t mean you shouldn’t be prepared. Practice common sense that you’d take with you everywhere in the world. Leave valuables at home (or in the hotel safe), don’t use ATMs after dark, and avoid drinking to the point of intoxication in public. The U.S. State Department offers the following tips for all Belize visitors:

Belize’s hurricane season normally runs from June to November (though climate change is shifting weather patterns, and the season may arrive earlier or run longer). While in Belize, it’s smart to monitor local and international weather updates from the National Hurricane Centre. The last major hurricane to impact Belize was Hurricane Richard in 2010.

As a tropical destination, Belize is susceptible to malaria, Dengue fever, and Zika virus. These illnesses are spread by mosquito bites, so come prepared with travel-size insect repellent. Wear long-sleeves and pants during high mosquito activity times, such as at dusk, dawn, and after rainstorms.

Serious injuries or illnesses normally require evacuation to another country with larger hospital facilities, likely to Mexico or the United States. Travelers may want to purchase travel insurance that includes evacuation policies when visiting Belize.

Planning a Trip to Belize? Check Out These Hotels: 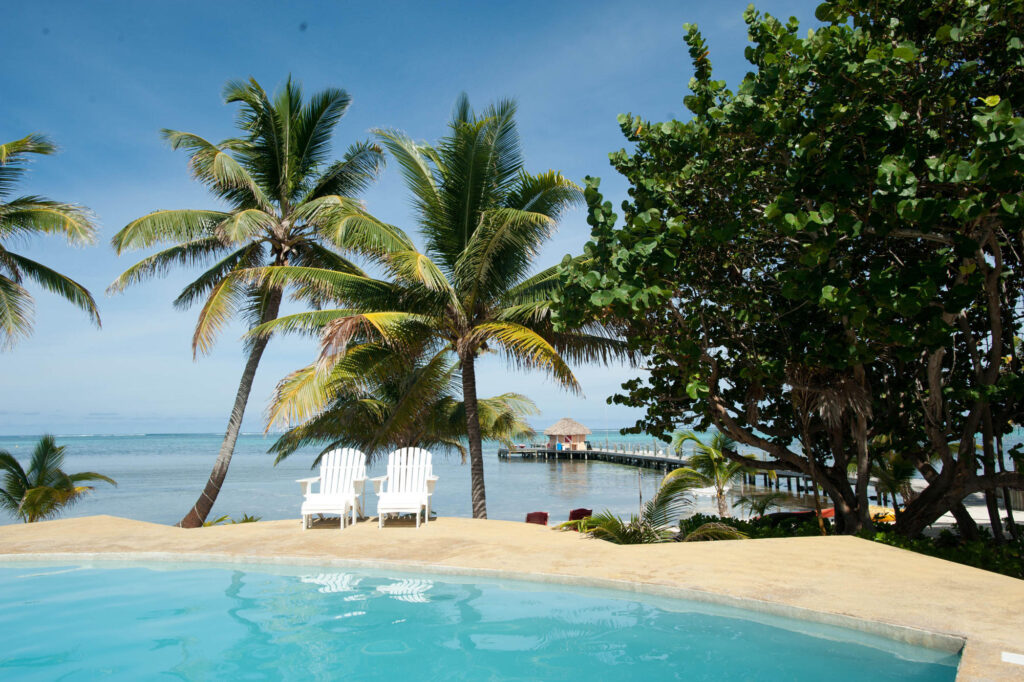 Pool at the Portofino Beach Resort/Oyster

Owners Jan and Sandra run this romantic San Pedro hideaway. Portofino Beach Resort has 16 rooms (many are cabana-style units with thatched roofs) and one large mansion for families. Getting to the resort is half the fun, as you’ll arrive and depart by boat. The owners call the vibe “barefoot elegance” and the quiet property is surrounded by palms and ocean views. The lovely pool overlooks the sea, the restaurant and bar have both indoor and outdoor seating areas, and the beach features firmly packed white sand and a swimming pier. Active types can take advantage of the free kayaks and snorkel gear, or the professional dive shop. You gotta see it to Belize it. 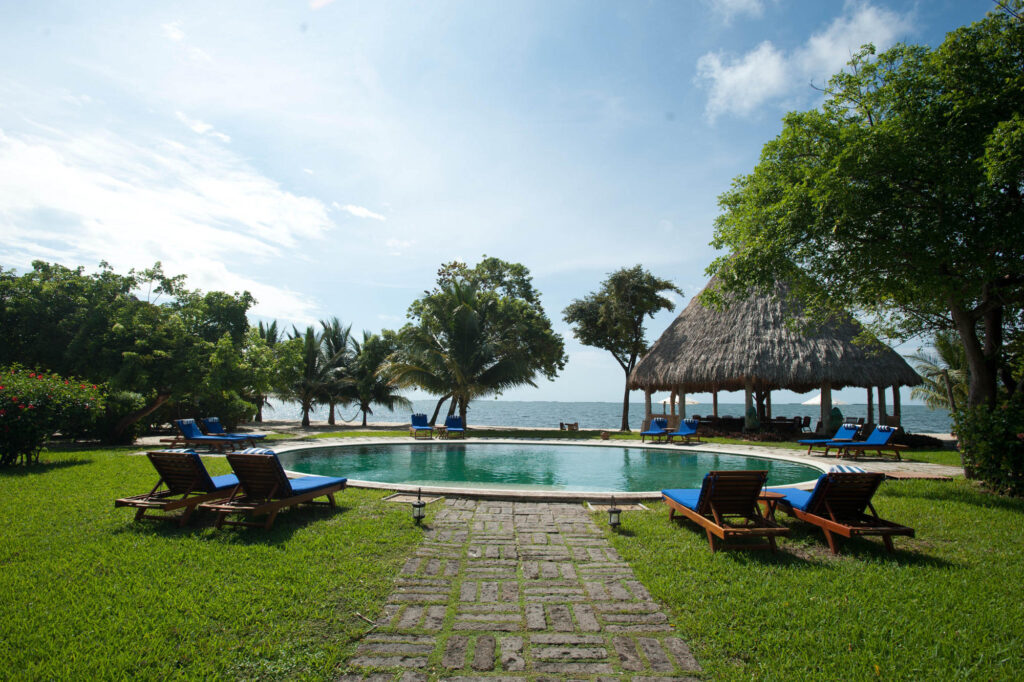 Pool at the Turtle Inn/Oyster

Francis Ford Coppola’s (yep, the famous director) Turtle Inn is up and running after a 2017 fire. It’s still an intimate luxury resort set alongside a beautiful stretch of the Caribbean Sea near Placencia. The resort offers a peaceful setting and Balinese-style private cottages and villas — each with a fabulous indoor/outdoor bathroom. Three restaurants, two bars, two outdoor pools, and a number of guided tours and excursions make the resort feel much bigger than it actually is. Most guests are here to unplug and unwind.

The Lodge at Chaa Creek 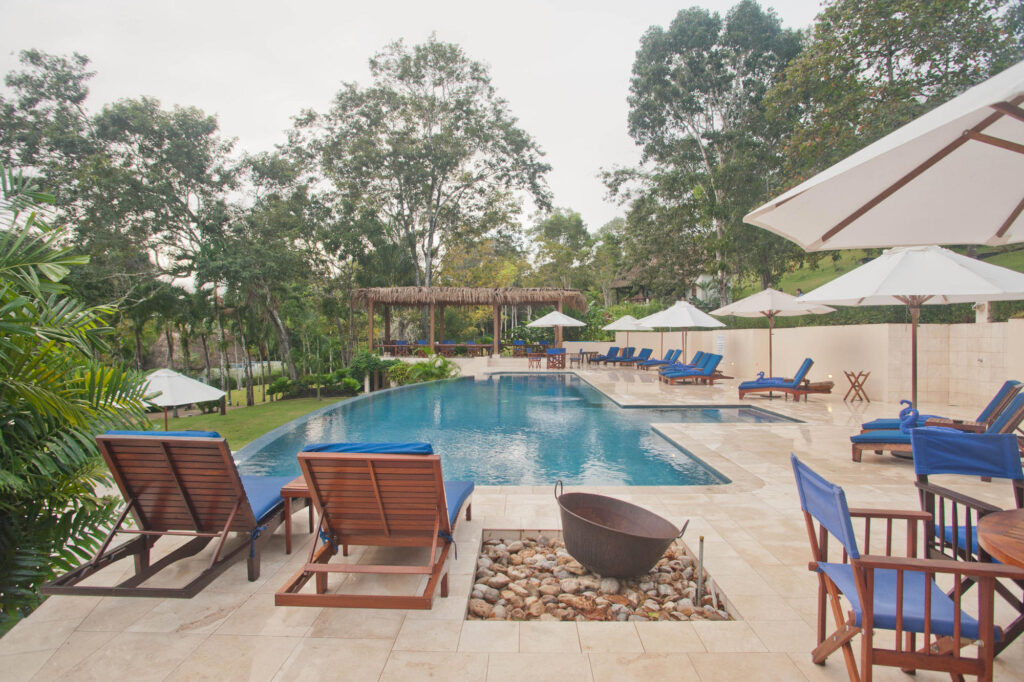 Pool at The Lodge at Chaa Creek/Oyster

Though Belize is celebrated for its coast and island cayes, you shouldn’t sleep on the rain forest interior. The Lodge at Chaa Creek is one of Belize’s first eco-lodges. It combines luxury facilities and the option to book a charming budget cabin accommodation at Macal River Camp. Modern amenities include an infinity pool with rain forest views, a full-service spa, and riverside setting. Activities are the name of the game, with everything from horseback riding to nature walks to cacao classes. Oh, and there are treetop villas if you want to sleep among the birds in the canopy.

Pricing for The Lodge At Chaa Creek