Dubai and the United Arab Emirates are well-established destinations for travelers seeking splashy glamour and beachside luxury with a dash of sweeping desert landscapes. Meanwhile, neighboring Oman has been quietly surging on the tourism scene for its extraordinary natural beauty, rich cultural offerings, and more user-friendly towns and cities. While we aren’t suggesting that Dubai and the United Arab Emirates’ popularity isn’t merited, we think the following 11 reasons are why Oman should be your next stop on the Arabian Peninsula. 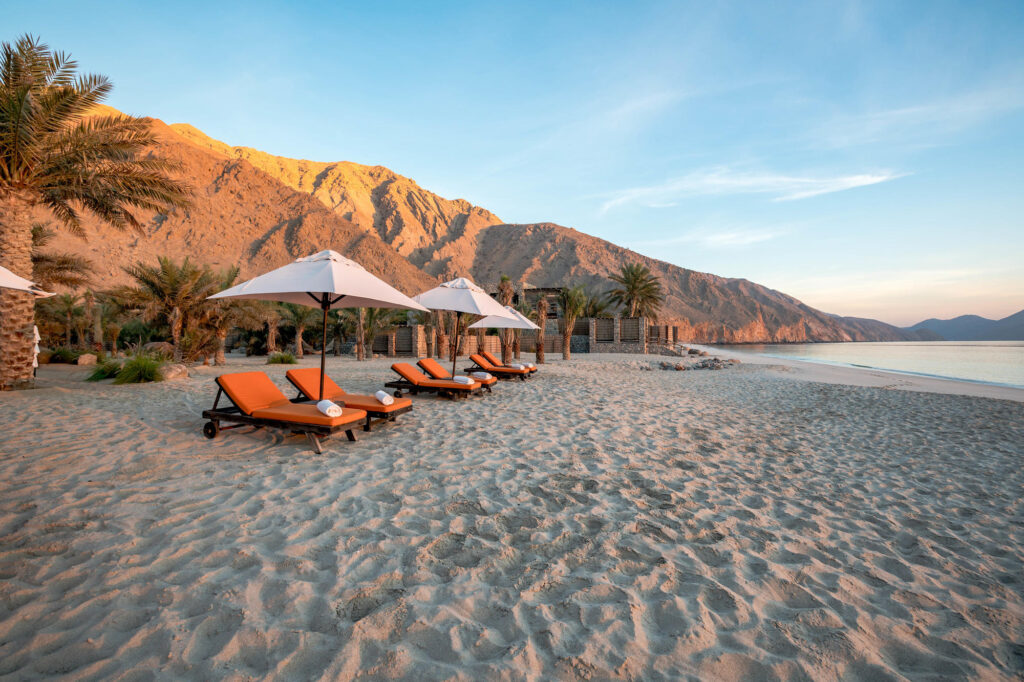 Despite bordering more tumultuous countries like Yemen and Saudi Arabia, Oman is one of the safest countries in the Middle East. Crime is extremely low, though it’s worth noting that Oman’s religious code and laws are rather strict for its citizens. A few illegal activities that travelers should be aware of include photographing government and military buildings, using aerial drones, and far more likely: sharing a room as a heterosexual couple if you’re not married. It’s not commonplace for hotels to pry into guests’ marital status, but it’s worth being prepared for the question to avoid an awkward and culturally-offensive situation. It’s also wise to avoid public displays of affection, especially for LGBTQ travelers since homosexuality is illegal. That being said, the law is not as aggressively enforced as in other Middle Eastern countries, so basic precautions are enough to ensure a safe trip in Oman. 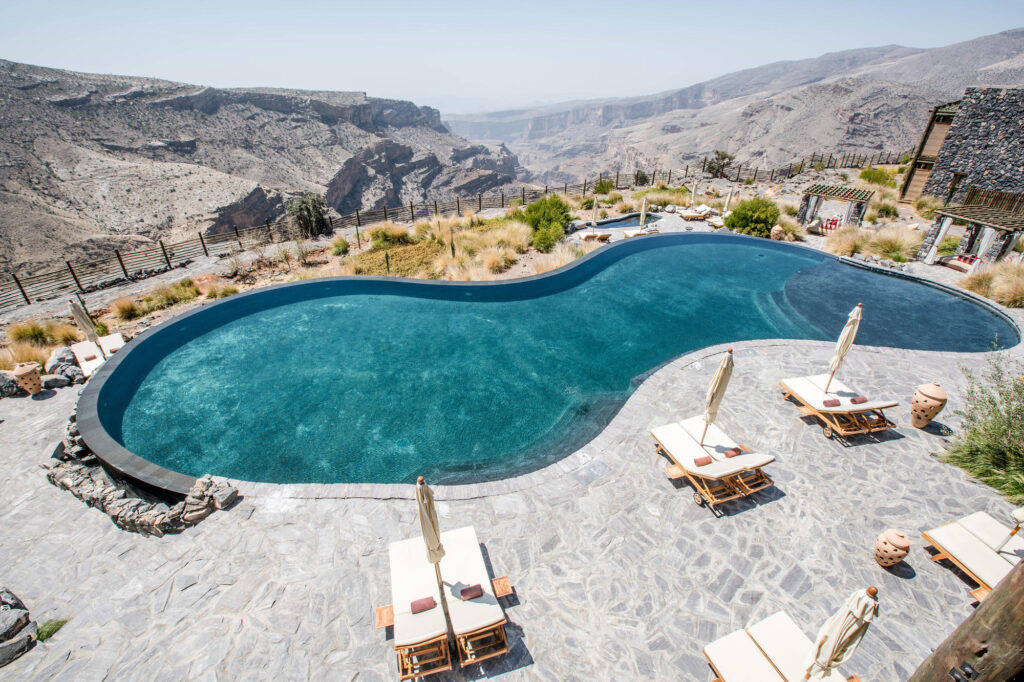 Pool at the Pool at Alila Jabal Akhdar/Oyster

More travelers are certainly becoming aware of Oman’s natural wonders and cultural allure, demonstrated by a 10% growth in international arrivals between 2016 and 2017. However, Oman’s 2017 total of 3.3 million international visitors is a mere trickle compared to the United Arab Emirates’ 20.7 million visitors. This means that most major sites in Oman remain uncrowded and authentic. Tourists are still a novelty in more off-the-beaten path Oman regions, such as Masirah Island and southern Oman.

3. You Can Swim in Spectacular Wadis in Oman 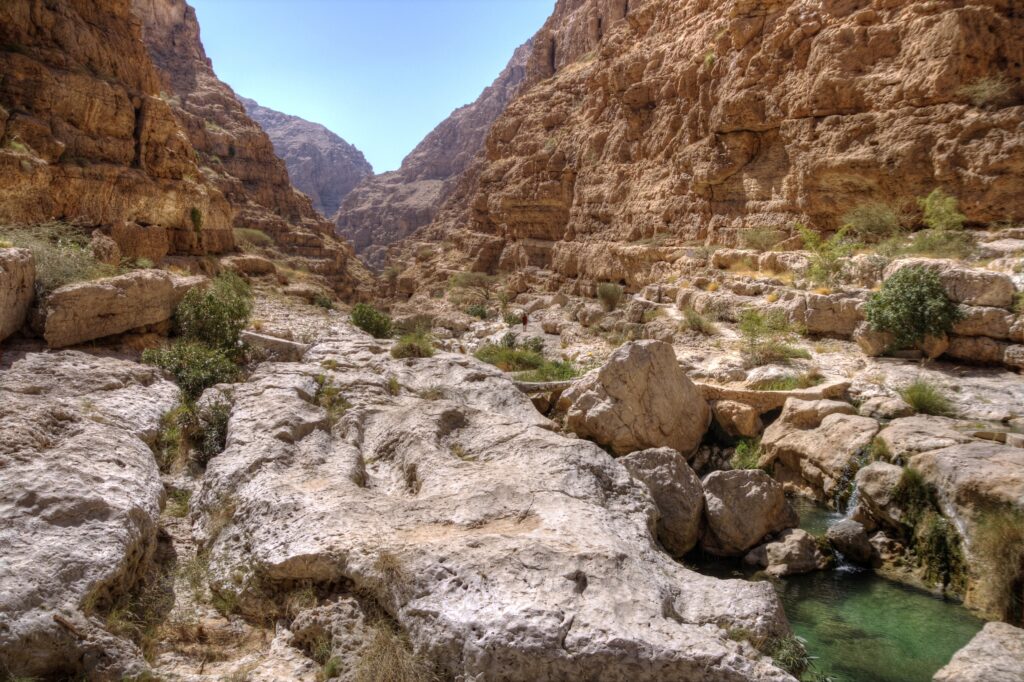 On the surface, Oman’s arid climate doesn’t evoke scenes of lush greenery and crystal-clear waterways, but that’s exactly what you’ll find at dozens of wadis across the country. Wadi is the Arabic word for canyon, and this is where Oman’s limited rainfall collects to form an oasis of palm trees, otherworldly rock formations, and refreshing swimming holes. Wadi Shab is the most popular and arguably most picturesque of Oman’s wadis. It’s a half-hour hike from the parking lot through the twisting canyon before you reach the first swimmable pool. Though you’ll pass many tempting spots along the way, do not take the plunge, as this section of the wadi provides drinking water for the nearby village. Once you’ve arrived, it’s another half-hour of swimming and walking between gorgeous pools until you reach the cave entrance leading to a hidden waterfall. To enter the cave, you must swim through a small gap in the rock face for about 40 feet. There’s enough room to keep your head above surface, but nowhere to pause and rest. The roof of the cave lets in sunlight to illuminate the waterfall, from which more daring folks can climb a rope up to dive back into the deep pool below.

Wadi Bani Khalid is another popular swimming hole, and its vast pools receive a reliable flow of water year-round. The surrounding caves and traditional irrigation systems are an added bonus to the magnificent scenery. Other swimmable wadis include Wadi Darbat in southern Oman and Wadi Al Arbeieen, a more off-the-beaten-path option near the Bimmah Sinkhole. Keep in mind that Oman is a Muslim country, so plan to cover up with a t-shirt and shorts if you’re joined by locals at any of these wadis while swimming.

4. Explore an Extraordinary Range of Hiking Trails in Oman 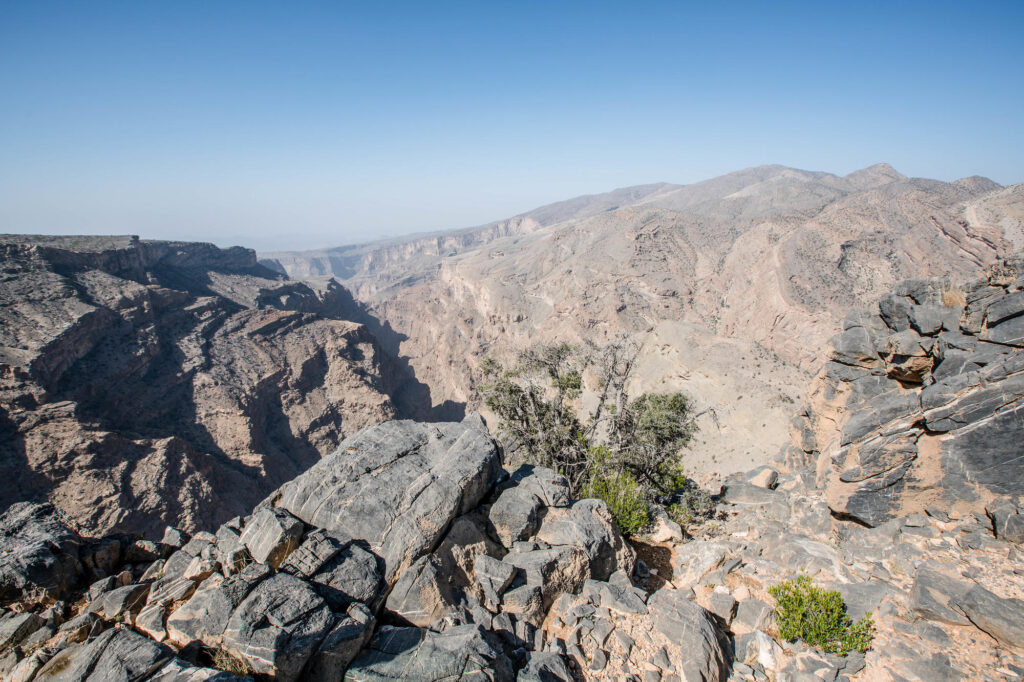 Oman possesses a variety of remarkable landscapes, including high peaks, expansive sand dunes, plunging wadis (see above), and subterranean caves. Situated west of Muscat, the Jebel Sham mountains comprise the highest peaks within the Hajar Mountains, a mountain range spanning both Oman and the UAE. At nearly 10,000 feet, the Jebel Shams reward hikers with sweeping views over Wadi Ghul, which is often referred to as “The Grand Canyon of Arabia.” The balcony trail traces a flat course along the inside of the canyon’s rim. Along with the exceptional vistas, hikers pass an abandoned stone village and terraced gardens built right into the cliffs overlooking Wadi Ghul.

Nearby, Jebel Akhdar’s landscape of lush orchards and gardens sets it apart from the starkness of the Jebel Shams. Jebel Akhdar and the surrounding plateau’s fertility and reliable rain have supported the Al Riyami tribe to continue thriving across several villages. A leisurely and picturesque hike awaits at Wadi Bani Habib. A path leads past walnut and pomegranate trees and descends roughly 200 steps to the bottom of the wadi. Another noteworthy hike, known as the Village Trail, runs 2.5 miles between the villages of Seeq and Al Aqor. Be sure to seek out the rose-water distillery in Seeq and Diana’s Viewpoint in Al Aqor—where Princess Diana took in the panoramic views during her 1986 royal visit.

5. Muscat is Easier than Dubai to Navigate 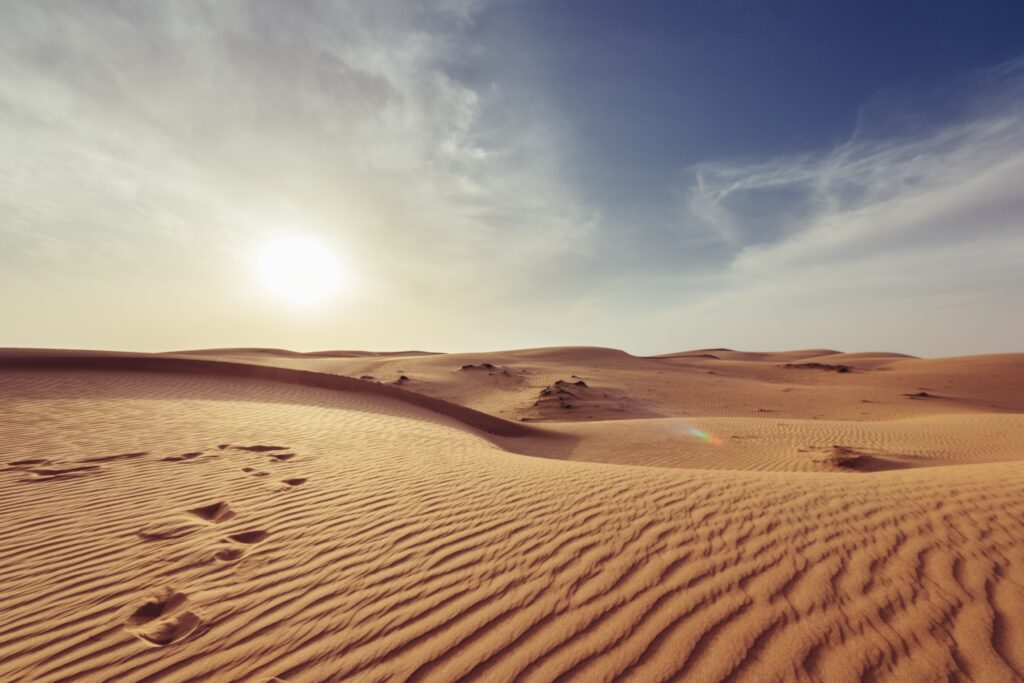 Muscat is the capital of Oman, and its traditional white-washed buildings, bustling souk, and pedestrian-friendly waterfront stand in stark contrast to the shimmering skyscrapers, bumper-to-bumper traffic, and luxury shopping malls of Dubai. While Dubai may have the edge in state-of-the-art public transportation, many of Muscat’s main attractions are within walking distance or an affordable taxi ride away. Just along the compact Mutrah corniche, visitors can peruse the labyrinth of vendors at the Mutrah Souq, admire contemporary Omani works at the Ghalya’s Museum of Modern Art, and hike up to the Riyamm Incense Burner for excellent views over the harbor. Many of Muscat’s cultural sites are concentrated as well, including Al Alam Palace, the National Museum, and the opposing forts of Al Jalali and Al Mirani.

6. The Musandam Peninsula Is Unlike any Other Landscape in the Middle East 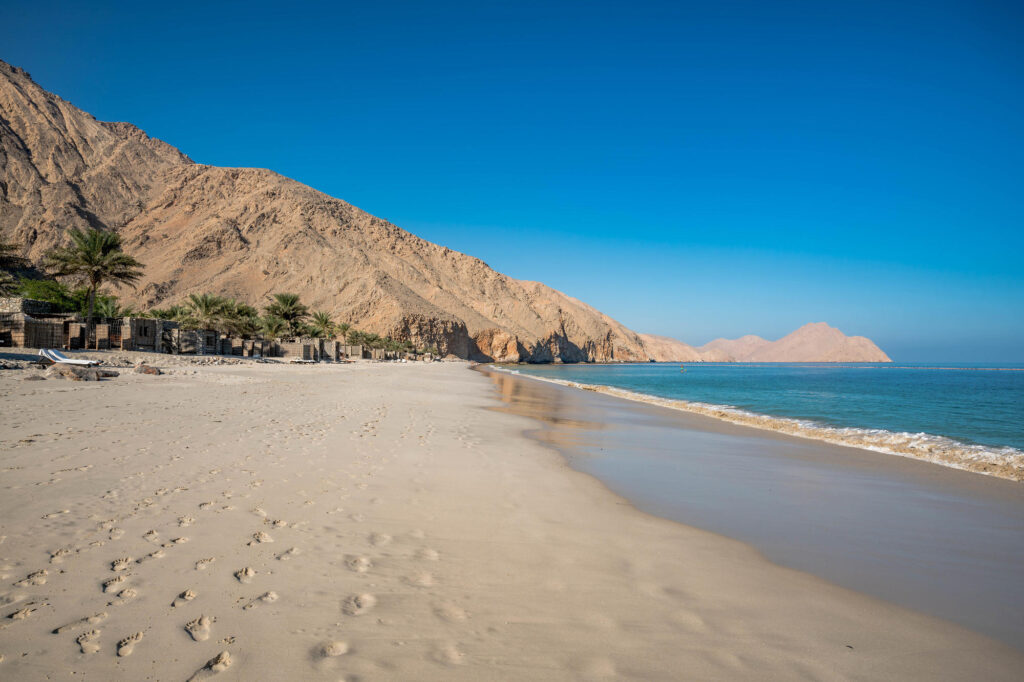 This dramatically scenic region is separated from the rest of Oman by the United Arab Emirates’ eastern coast, making it easier to visit from Dubai than Muscat. The peninsula is characterized by jagged limestone peaks, which descend sharply into hundreds of inlets, known as “khors.” Fanning out into the Strait of Hormuz, Musandam’s khors are often compared to the fjords of Norway. This remarkable topography has kept Musandam’s fishing villages isolated from the rest of Oman, as many are still only accessible by boat today. Taking a dhow boat tour is the best way to see the outlying khors. Khor ash Sham is Musandam’s largest, and it’s likely you’ll spot dolphins breaching the calm, azure waters while you cruise past tiny stone villages clinging to the cliff sides. Other noteworthy stops include the village of Tawi for its preserved petroglyphs, as well as the northerly village of Kumzar, where you’ll hear vendors speaking the local Kumzari language instead of Arabic in their lively souk. Musandam’s interior mountains are incredibly picturesque as well. Traveling along the Jebel Harim Pass grants views of deep canyons and terraced villages. Be on the lookout for well-preserved fossils of marine life in the rock face, located a startling 6,000 feet above sea level.

7. Oman has Some of The Best Scuba Diving in The World 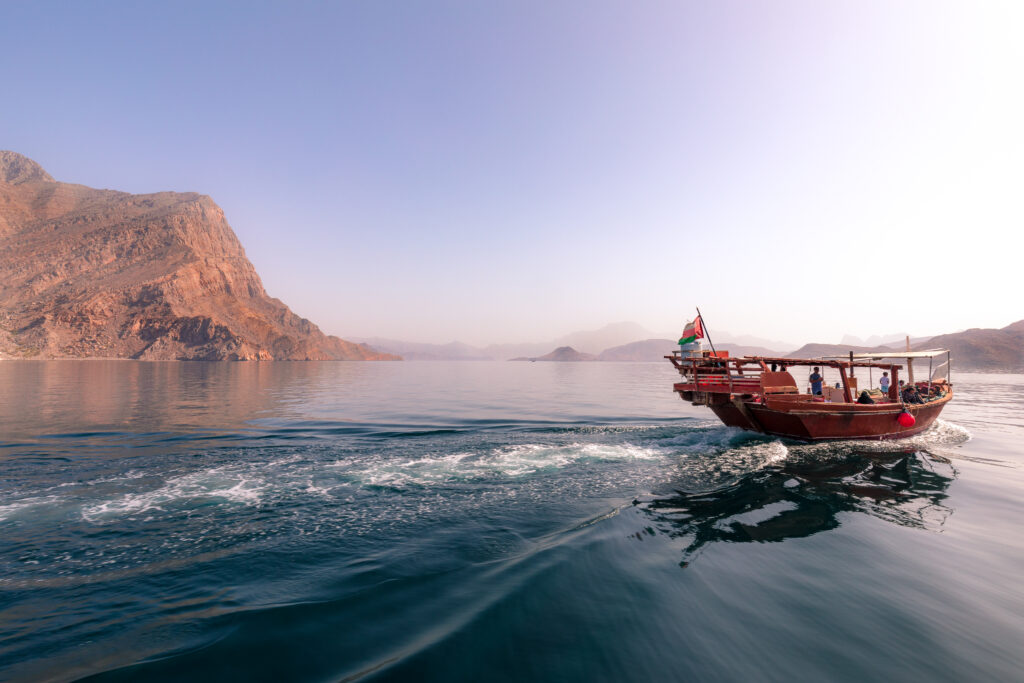 The surrounding Gulf of Oman and Arabian Sea are home to vibrant coral reefs teeming with marine life. Several reefs are within day-trip distance of Muscat. The rocky Daymaniyat Islands may appear barren, but divers and snorkelers will witness a thriving reef system encircling the island. The small archipelago has been protected as a nature reserve for both its coral reefs and turtle nesting grounds on its pristine beaches. Another popular dive site near Muscat, Bander Khayran, features well-preserved shallow reefs and the wreckage of a 276-foot submerged vessel. The inlets and islands along the Musandam Peninsula hold Oman’s other premier diving sites. Lima Rock is a top choice during the winter to spot migrating whale sharks, while numerous caves in the limestone rock face create a unique environment.

8. There Are Thousands of Miles of Beaches and Coastline to Explore in Oman 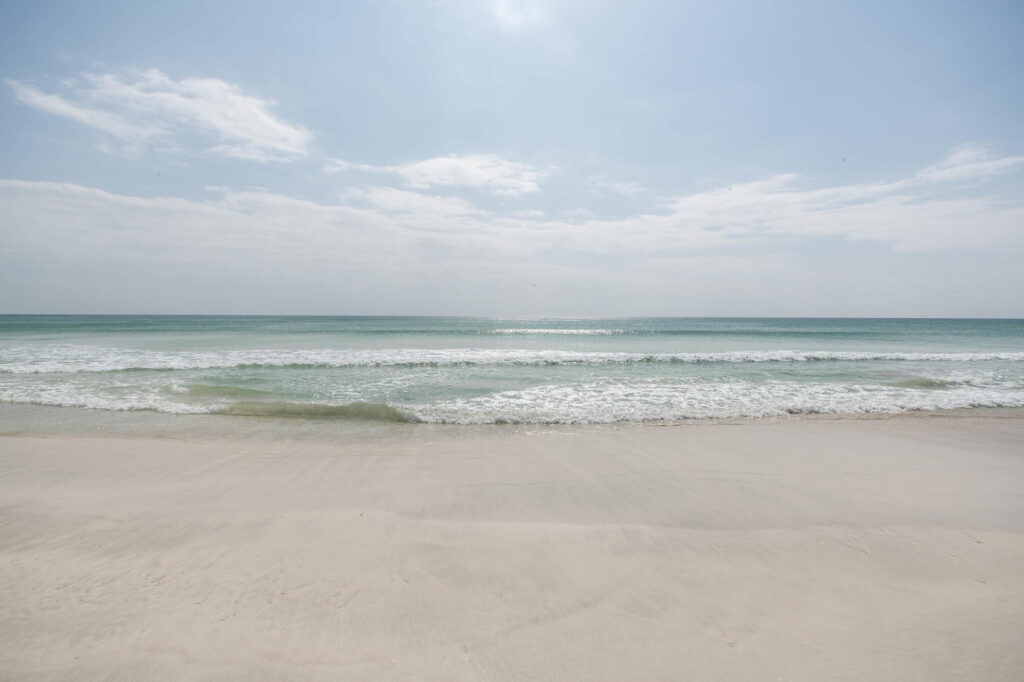 Beach at the Salalah Beach Villas/Oyster

Oman possesses nearly 1,900 miles of coastline, and with a population of just five million, much of the country’s beaches are virtually deserted. Located 15 miles outside Muscat, the town of Bandar Jissah’s beach is scenically set between limestone cliffs on a sheltered bay. Further down the coast on the easternmost point of the Arabian Peninsula, the village of Al Hadd, includes golden, sandy beaches backed by picturesque cliffs. Sea turtles arrive in droves to nest in the fine sand, especially at Ras Al Jinz and Ras Al Hadd beaches. The sparsely populated Dhofar region in southern Oman has some exceptional beaches, such as Al Mughsayl Beach. The sweeping expanse of golden sand features coconut and banana plantations, as well as crystal-clear water. For more solitude, catch the ferry to Masirah Island, where plenty of empty beaches can be found along the 59-mile-long island.

9. Salalah Transforms into a Gorgeous Oasis During the Summer 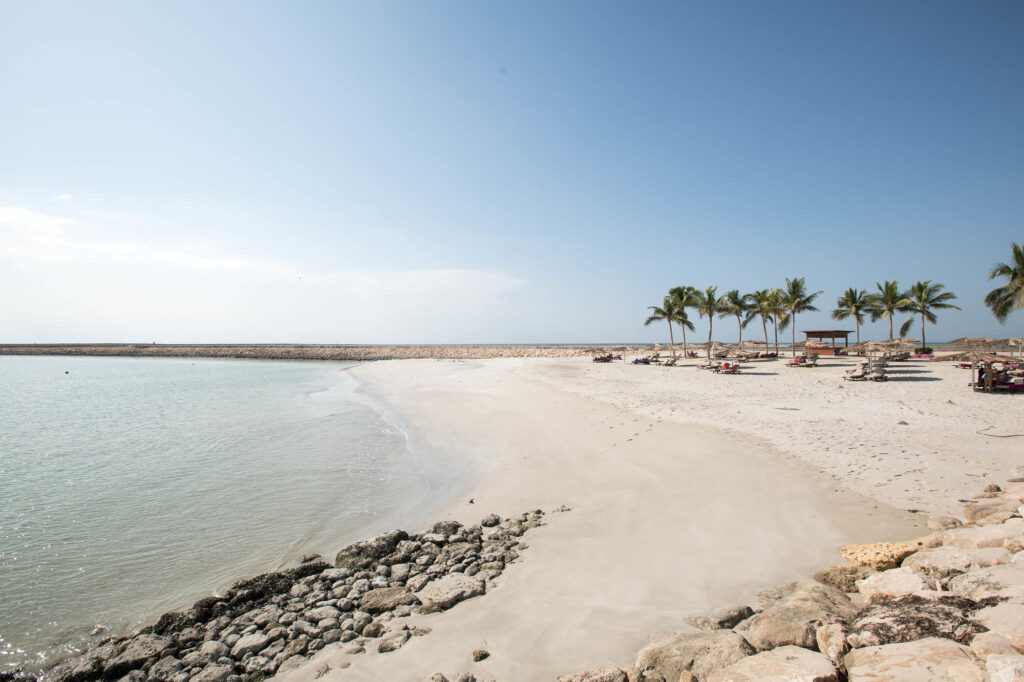 Oman’s third largest city, Salalah, is located more than 600 miles south of Muscat. Salalah’s geographic separation from Oman’s other major cities is evident in its eastern African cultural influences, as well as the timing of its monsoon season. While the Emirates and northern Oman see sweltering heat and minimal precipitation during the summer months, southerly Salalah enjoys consistent rainfall and evening temperatures as low as 70 degrees Fahrenheit. The monsoon rains also transform the landscape into an oasis that supports fruit orchards and draws camels and herds of goats to graze the lush greenery.

10. You can Repel Down the World’s Second Largest Cave Chamber in Oman 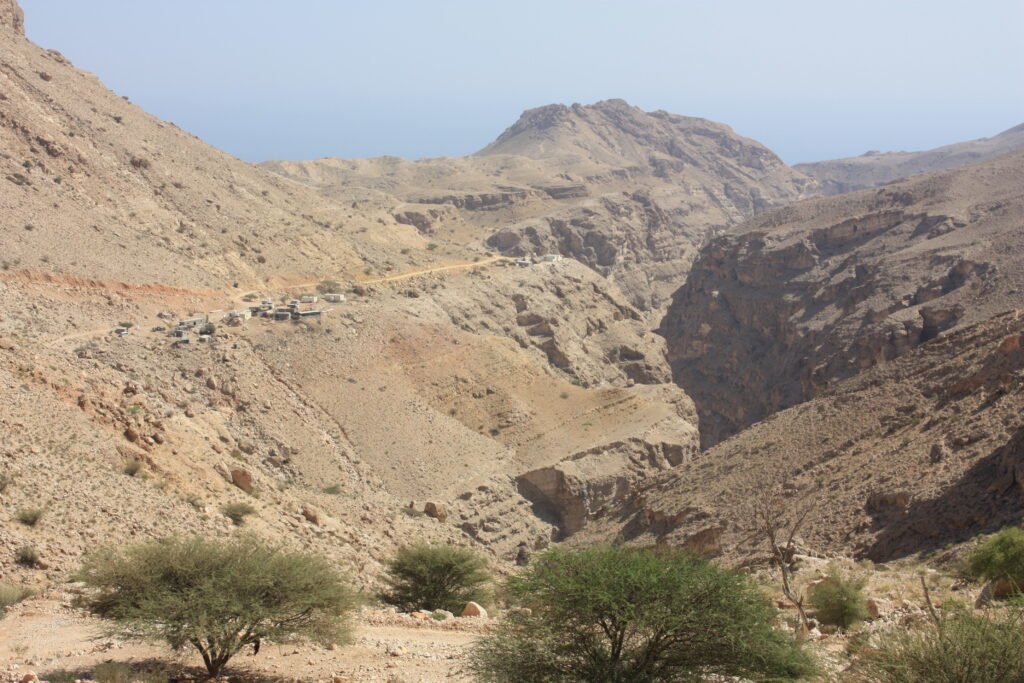 Located around a half-hour’s drive inland from the coastal village of Fins sits the world’s second largest cave chamber, Majlis al Jinn. Reaching the cave’s entrance requires either a four-wheel-drive car or a three-quarter-mile hike through rugged rocky terrain. After descending 650 feet by rope, you’ll reach the 624,000-square-foot cave floor. Three holes in the cave’s roof illuminate the limestone interior, including many goat and bird skeletons lining the floor, creating a truly surreal atmosphere. Be sure to plan this adventure well in advance, as visiting requires a special permit from Oman’s Ministry of Tourism. 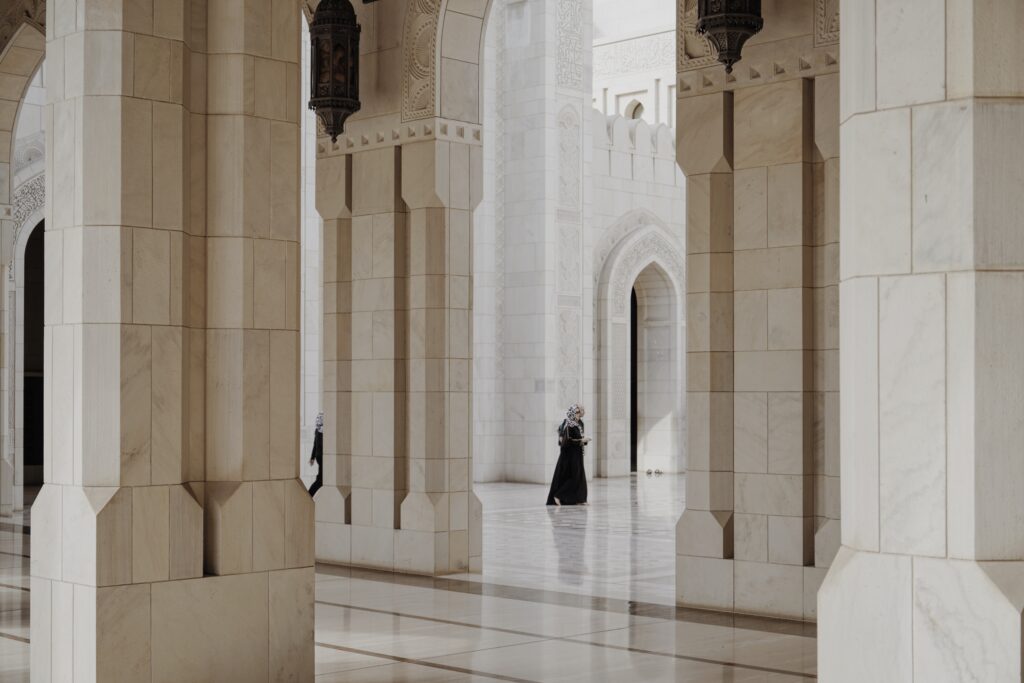 Nearly 90% of the United Arab Emirates’ population is foreign born, compared to just 45% in Oman. This means that visitors will be primarily interacting with Omanis during their travels, including shopping at souks and dining at local restaurants. Additionally, Omani families enjoy visiting their country’s beautiful wadis and beaches during weekends (Friday to Saturday), providing additional opportunities to meet and socialize with locals. While visiting Oman’s more remote areas, it’s not uncommon to be approached by curious villagers (typically men) interested in striking up a conversation. Oman’s citizens can attend university for free, so don’t be surprised to encounter skilled English speakers amongst the younger generations. For even more cultural immersion, consider staying in a traditional tent with a nomadic Bedouin community in the magnificent Wahiba Sands region. 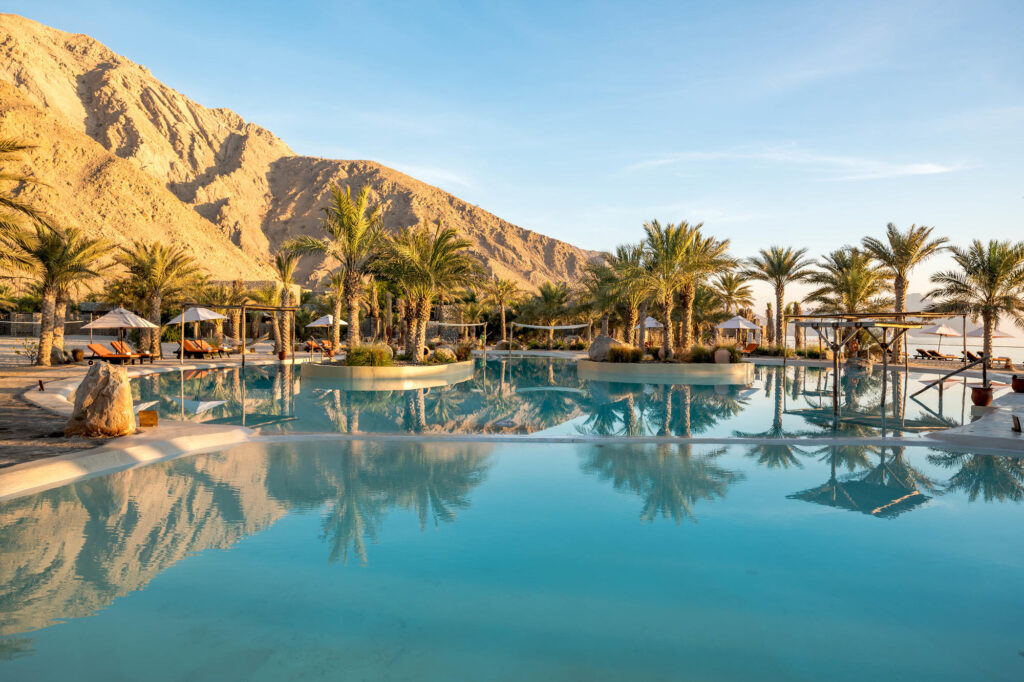 Located on the southeastern coast of the Musandam Peninsula, the Six Senses Zighy Bay is our top pick for travelers seeking stylish comfort in one of Oman’s most beautiful, remote regions. Guests can stroll miles of sandy beach, embark on private cruises, scuba dive offshore, or just take it all in from the resort’s two immaculate pools.

Our Top Picks for What to Pack in Oman