Couples come to the City by the Bay for its unsurpassed beauty. San Francisco’s peninsular combination of bay and ocean, with steep crests rising in between, creates what is quite possibly the most picturesque natural setting for a major city anywhere in the world. Along with gorgeous panoramic views, San Francisco offers renowned and eclectic dining, attractive turn-of-the-20th-century architecture, a lively performing-arts scene, and dozens of acclaimed landmarks. 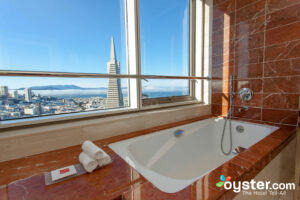 If ever there was a hotel room designed to stay in all day and night, this is it. From the top 11 floors of San Francisco's third-tallest building, couples can soak in breathtaking views of the city and bay. The spacious rooms are distinguished by their subtle Asian-inspired design and luxury details like featherbeds and marble bathrooms with large tubs. The astounding service includes free afternoon tea in the room and 24-hour room service. You'll barely notice you're staying in the less-than-romantic Financial District. 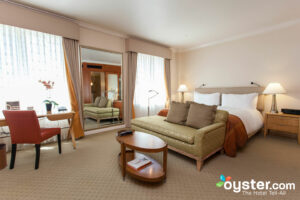 This is one of the San Francisco's most special hotels. One block from busy Union Square, the 110-room boutique hotel is an enclave of quiet luxury and pampering service. The posh rooms come with Nespresso machines, flat-screen LED TVs, limestone bathrooms, and knitted cotton Ploh robes. The Taj Campton Place restaurant is not just a hotel restaurant -- it is its own institution with a distinguished reputation and two Michelin stars. 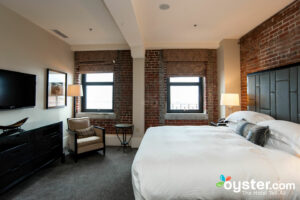 The Fairmont Heritage, Ghirardelli Square is a luxurious gem in a historic landmark -- a former chocolate factory built in 1893. Every one of the top-of-the-line units (one- to three-bedroom apartments) has a fireplace, luxurious bathroom, and super-comfortable beds. Some rooms have views of the water, and an outdoor terrace with fire pits overlooks beautiful San Francisco Bay. In Ghirardelli Square, you can go to a free wine tasting, wander along waterfront paths, or dine at a restaurant with a view. Want to go further afield? Let the hotel's free Maserati car service take you. 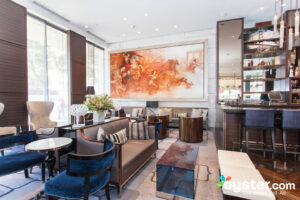 One of the city's top luxury hotels is also among its most romantic. Compared to the smaller, stuffier rooms at competitors like the Ritz-Carlton and Four Seasons, St. Regis' rooms are refreshingly modern and high-tech. A touch-screen next to the bed controls the music, lights, shades, and TV --- and puts guests in contact with a 24-hour butler, who will, among other things, draw a bath in the deep tub that opens to the room (try the Rose Petal Romance bath). Downstairs, Grill restaurant is a dining destination in its own right, and Remede Spa serves chocolate truffles and champagne in its relaxation rooms. 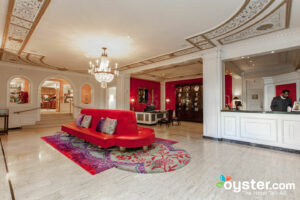 Nob Hill, San Francisco's swankiest neighborhood, is home to many of the grandest hotels in the city -- stately old buildings with cavernous marble-filled lobbies and hundreds of rooms. By contrast, the elegant 136-room Scarlet Huntington is more intimate and unassuming. Yet it's just as luxurious as its neighbors, with a formal staff that's attentive, yet discreet, and an on-site spa that's one of the city's best (guests can use its indoor pool and lounge with a fireplace for free). At 335 square feet, standard rooms are larger than the average San Francisco hotel room and about the same size as the entry-level rooms at higher-priced Nob Hill neighbors. Many rooms have sweeping views, either of the city and the bay beyond or of imposing Grace Cathedral and Huntington Park. Their chinoiserie-influenced decor draws from a bold gold, fuchsia, and teal palette, and fabrics like imitation snakeskin, leather, and satin add loads of texture. 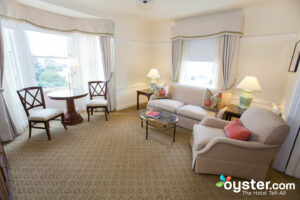 This 48-room property has an upscale, refined vibe that fits in nicely with its location in Pacific Heights, one of the most affluent neighborhoods in San Francisco. While common spaces are few, all are lovely; the lobby, with free coffee, feels like an attractive living room with antique furniture and floral fabrics. The cheery breakfast room is where both the free continental breakfast and the free evening wine reception, complete with hors d'oeuvres, take place. Rooms have look with dark wood furniture, pastel headboards, and gilded accents, and all are incredibly spacious. The on-site fitness center in the basement is small, but guests have free access to a YMCA, and though there's no full restaurant, a limited menu is available for 24-hour room service. 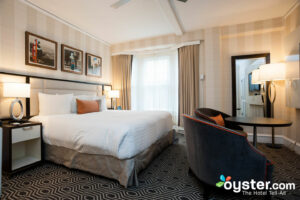 The Inn at Union Square – A Greystone Hotel

This 30-room, upscale European-style boutique hotel is in a superb location next to Union Square. Amenities, including a wine and cheese hour and cookies in the evening, contribute to what guests say is a warm, welcoming atmosphere. The rooms are on the small side, however, and while the continental breakfast is free, it gets crowded in the morning. 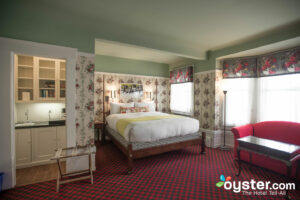 The 26-room, mid-range White Swan Inn in San Francisco’s Nob Hill district offers a cozy and intimate atmosphere, with rooms featuring fireplaces and ample sitting areas. The bed-and-breakfast features a classic-inn-meets-mod-London vibe, with abundance of floral walls coupled with cheeky artwork and lattice-patterned arm chairs designed by Christian Lacroix. The result is a jumble of patterns and textures that can feel fussy and cluttered to some, but overall gives off a quaint and charming vibe. The inn, an easy walk to Chinatown and Union Square, may be old-looking, but it doesn’t feel dated thanks to a renovation in early 2015.