Drawn to Miami’s vices, A-list celebs regularly come to the city of sand, sun, and sass — whether for a red carpet affair or to be-seen on South Beach. Here’s our list of where to stay if you want to catch a glimpse of your favorite movie stars, musicians, and athletes. 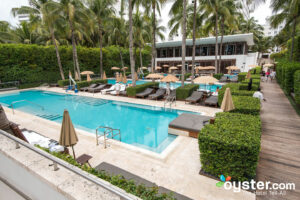 Celebrity sightings at the Setai, where the enormous rooms can easily accommodate a small posse, are really too numerous to mention. Everyone from Jay-Z to Cat Power to Chris Brown has laid down tracks at the Lenny Kravitz-designed on-site recording studio, and the hotel regularly plays host to major fashion and entertainment events. The Setai is also reported to be a favorite of Lindsay Lohan, Paris Hilton, Gisele, U2, and Madonna, among others. Hilary Duff and Jennifer Hudson have performed at the hotel on New Year's Eve, and Beyonce and Britney Spears have frequented the hotel as well. 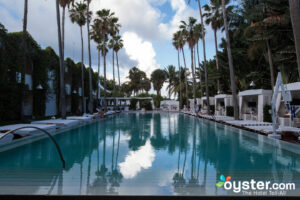 The hotel's nightclub, the Florida Room, was designed by Lenny Kravitz, and its Lucite piano's keys have been tickled by both Kravitz and Jamie Foxx. Queen Latifah, Sean Paul, Ludacris, Wyclef and Grace Jones have performed here as well. George Clooney reportedly stayed at the hotel in the spring of 2009 while filming Up in the Air, and Justin Timberlake is also said to have laid his fair head down at the Delano. Matthew McConaughey, Sandra Bullock, Chris Rock, Owen Wilson, Beyonce, and Tobey Maguire have all reportedly stayed here, too. Players on the Miami Heat have been known to grab a drink at the Rose Bar. 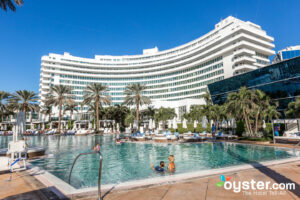 The stars turned out for the hotel's grand reopening party in November 2008 -- Kate Hudson, Alex Rodriguez, Gwyneth Paltrow, Amanda Bynes, and the Kardashian sisters were among them -- and haven't stopped coming by since. They come to party at events like Lady Gaga's New Year's Eve poolside concert, where stars including Hayden Panettierre, Kevin Connolly, Chace Crawford, and J.C. Chasez came to help Gaga ring in 2010, and stayed to celebrate at the hotel's LIV nightclub (which has also played host to Christina Aguilera and Kim Kardashian during celebrity stylist Simone Harouche's bachelorette party). Maria Sharapova, Sean Combs, Nick Lachey, and Molly Sims have all been seen partying here in the past. The hotel is also a hotspot for celebrity families, like J-Lo and her twins and Kate Hudson and son Ryder. 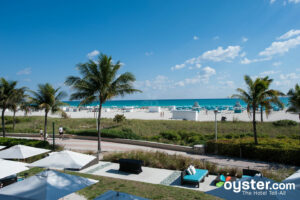 "No" is not in the vocabulary of the staff at the Ritz-Carlton South Beach, which prides itself on its excellent service to even its most particular patrons, including Russell Simmons, Britney Spears, Jennifer Lopez and Marc Anthony. The hotel has a staff of tanning butlers who wander around the pool offering free spritzes of Evian, sunscreen application, and sunglasses cleaning. These butlers claim to have rubbed the likes of Jessica Simpson, Nick Lachey, Johnny Knoxville, and Vivica A. Fox. 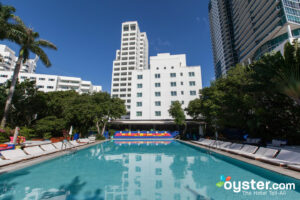 The Shore Club is a necessary stop for celebrities in Miami, and it's home to Nobu -- a sushi restaurant co-owned by Robert De Niro -- and the sceney Sky Bar. It is rumored that stars stay free at this hotel, where Jessica Simpson, Tara Reid, Naomi Campbell, and Lance Armstrong have been spotted. 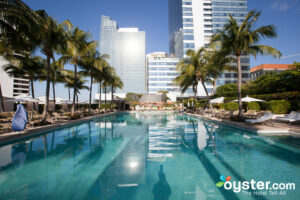 Tom Cruise, Britney Spears, John Mayer, and Jessica Simpson have reportedly been guests of the hotel. However, high-profile guests choose the Four Seasons when they want to fly under the radar, not when they want to be gawked at by fans around the pool, so don't expect a celebrity-watching scene. 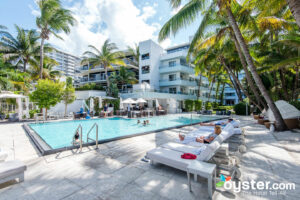 The Sagamore knows how to throw a party, and we all know celebs can't resist a good soiree. Maxim Magazine had its Super Bowl XLI Party here, where Nick Lachey, Fergie, Kevin Federline, Andy Roddick, Taye Diggs, and Tony Romo rooted for their favorite team in style. Musicians came out for a Heineken Premium Light party at the Sagamore's Social Miami, where DJ AM, Travis Barker, and Lil Jon graced the red carpet. 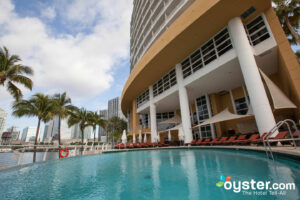 Located on Brickell Key, a tiny island off the shore of downtown Miami, the Mandarin Oriental is secluded and exclusive -- perfect for celebrity couples looking for a getaway. When they were a hot item, John Mayer and Jennifer Aniston holed up here for five days, during which he reportedly sent flowers to the room almost every day. The hotel's clientele is also rumored to include celebrities like Penelope Cruz, Mick Jagger and the Dalai Lama. Once, when Michael Jackson stayed here, he felt the urge to sign his name on the painting in his room (the hotel kept it). 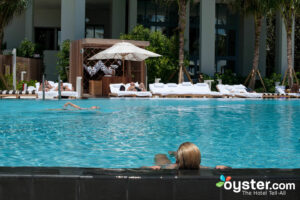 After announcing his contract with Miami Heat, LeBron James partied with teammates at the W South Beach, booking six poolside cabanas for the weekend. Knight and Day costars Cameron Diaz and Tom Cruise took a break from filming to attend a Super Bowl bash in 2010 with their significant others, Alex Rodriguez and Katie Holmes, and the hotel's a known favorite of the likes of Pamela Anderson and Hilary Swank. 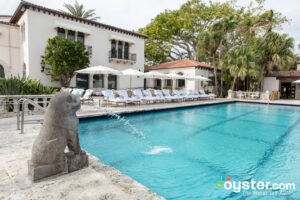 Walking around Fisher Island, you may catch some familiar faces. The island is accessible only by ferry, helicopter, seaplane, or boat, and residents, most of whom live there only part-time, are some of the wealthiest people in the world. Oprah Winfrey, Mel Brooks, and financier Martin Zweig have all lived on the island, and the Clintons and Prince Andrew have visited.