Oyster knows what travelers look for in their hotels. When we review properties around the world, we evaluate how every feature stacks up against the competition, from the rooms to the pools to the restaurants. So if you’re planning a posh trip and need a place to start, you’ve come to the right place. Take a look at our top picks for luxury in Monterey County, and get inspired! 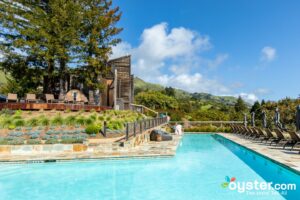 Situated on more than 200 acres of picturesque land, The Ventana Inn & Spa looks like a rustic cabin nestled in the woods -- yet it features 62 luxurious, streamlined rooms with wooden accents, refreshing pops of color, and modern amenities such as flat-screen TVs, iPod docks, and free Wi-Fi. Many rooms have fireplaces, creating a cozy retreat vibe to fit with its surroundings -- though glass doors and large windows keep the rooms feeling bright and airy. Not a place for families, the overall goal of the hotel is to create a zen, holistic retreat with such offerings as yoga classes, discovery walks; afternoon wine and cheese, Japanese baths, and two pools (one of which is clothing optional). But access to these "freebies" aren't technically free -- they're included in the daily resort fee. Nonetheless, the Ventana Inn tops our best luxury hotels list because it's rooms are the most beautiful and luxurious in Monterey County -- and the views are hard to beat, as well. 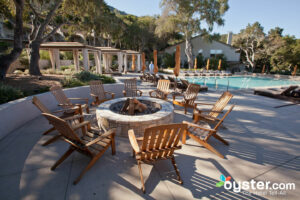 Carmel Valley Ranch is a 500-acre property offering modern luxury in a rustic, bucolic setting, with tall oak trees, organic gardens, and rolling vineyards. Rooms are decorated in soft tones and feature flat-screen TVs, iPod docks, and Keurig coffeemakers. Enormous, immaculate bathrooms with soaking tubs and separate walk-in showers provide space to relax, along with small private decks and travertine fireplaces. The ranch's many features include two outdoor pools -- the River Ranch Pool, featuring a splash zone for kids, and the Lodge Pool -- as well as an 18-hole golf course designed by Pete Dye. There are seven fire pits perfect for nightly fireside s'mores, and endless activities -- tai chi or beekeeping, anyone? -- that can keep both couples and families entertained. And everywhere, amazing views abound. 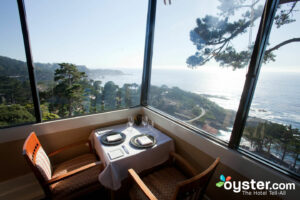 The cliff-side Hyatt Carmel Highlands offers awe-inspired views unrivaled anywhere else around Monterey and Carmel -- some could even argue the entire West Coast. Accommodations are seemingly as roomy as the stunning ocean views they offer, most complete with working fireplaces and stocked with simple yet modern amenities. The on-site restaurants serve meals that rival the scenery, and the outdoor fire pit is good for relaxing and taking in healthy doses of sea breeze after a day of kayaking (you can rent kayaks on-site). With 144 rooms and not as many acres for roaming, it's not quite as secluded and intimate at the Carmel Valley Ranch, but it comes in closely behind it. 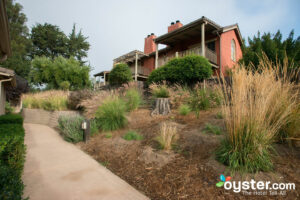 This 57-room rustic-luxe retreat in Carmel Valley sits in a lovely setting among rolling hills and vineyards. Details such as vaulted beamed ceilings, wood-burning fireplaces, and country-inspired decor help create an atmosphere that is homey and cozy. Rooms are large and comfortable with stone fireplaces, feather beds, and plush white bedding, and big bathrooms feature walk-in showers and two-person soaking tubs. Some rooms feature double French doors that lead to cute private patios with Jacuzzis, while rooms on higher floors have decks instead. There are several restaurants here -- including the famous Marinus restaurant with its chef's table where up to five guests can dine while watching the chef cook. Additional appealing amenities include an outdoor pool, pool bar, and inviting spa where wine-based treatments are available. It's a sophisticated, romantic spot in Carmel Valley. 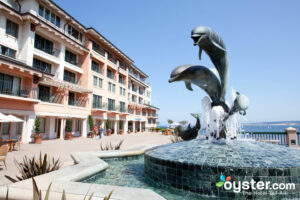 The 290-room Monterey Plaza is as close to the ocean as it gets: Built on pillars above the water, it offers an ocean experience like few other hotels in the area do. From the gorgeous views from the spa and the fitness center, to the wonderful outdoor seating in both on-site restaurants, the property blends with the sea in every possible way. The upscale rooms have the elegant, classic decor and modern amenities that you might expect to find in a hotel at this price point -- but bathrooms, though nice, are slightly sub-par compared to the rest of the room, and the property lacks a pool, so -- though definitely luxurious -- this hotel comes in fifth on our best luxury hotels list.