Being that Paris is one of the most popular cities in the world for travel, it’s no surprise that it’s home to some of the most luxurious hotels. We visited nearly 400 hotels in paris to evaluate how they stack up against the competition, from the rooms to the pools to the restaurants, to see which were the best of the best. So after you’ve sampled delectable eats, visited the Notre Dame, and attended a performance at the Opera Garnier, you can retire to an opulent guest room with top-notch features. Take a look at our picks for the best luxury hotels in Paris, and start planning your getaway! 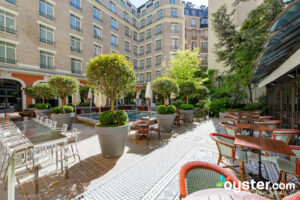 Le Royal Monceau is a seriously luxe hotel a stone's throw from the Arc de Troimphe. A Philippe Starck renovation -- finished in 2010 -- brought a heady mix of art and design, which extends to every corner of each of the 149 rooms, to this already high-class hotel. Facilities also go above and beyond most five-star standards, from Michelin-star dining to a guitar in every room, to bespoke art collections and a digital 3D theater on-site. Unsurprisingly, rates are eye-wateringly expensive -- probably the highest in Paris -- so this resort is only to be considered by those with very deep pockets. 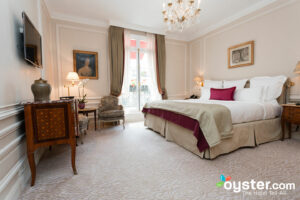 The world-renowned luxury hotel -- a part of the Dorchester Collection -- is synonymous with Parisian elegance and good taste. Iconic red awnings and chestnut trees welcome guests to the historic setting on the upscale Avenue Montaigne lined by high-end shops such as Christian Dior, Prada, and Chanel. Inside, the 146 rooms and 45 suites are decorated in classic Art Deco style -- picture draped curtains, gilded wall panels, and crystal chandeliers -- with modern touches like flat-screen TVs and marble baths. With six distinct restaurants, direct access to the Dior Institue spa, a large fitness center, and a can't-miss daily breakfast in a leafy garden, the Plaza Athenee doesn't miss a beat. 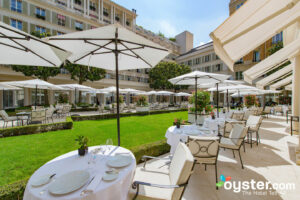 The 88-room Hotel Le Bristol opened its doors in 1925 during the Roaring Twenties, and today is still one of Paris' best-known luxury hotels. It offers impressive amenities for its small size, including a sunlit indoor pool (a rare find in Paris); a three-Michelin-star restaurant, Epicure; and a lovely spa with three floors featuring a Turkish bath and playroom for kids. Families are welcome in this posh environment: There's a dedicated Children's Programme, and little ones may appreciate the fact that there's a resident cat roaming the hotel. Rooms are elegant, aside from the dated comforters, and very in size and price. The hotel -- located on one of the most high-end shopping streets in Paris -- is steps to the Hermes flagship store, as well as avenue Montaigne and Champs Elysees. 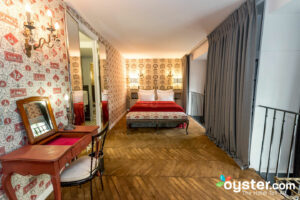 With a sweeping private entrance surrounded by green lawns and an impressive fountain, the upscale Saint James is a rare find in Paris -- in fact, the 19th century manor is considered the only chateau-hotel in the city. It's fitting that the hotel is located in the wealthy 16th arrondissement (and yes, valet parking is included). The 48 rooms and suites are large by Paris standards, and decorated in plush luxurious fabrics. But the common areas are more impressive -- especially the black and white grand staircase on the main floor. The terrace is a beautiful spot for lunch on a nice summer day. And there's also a small fitness center, a spa, and a gourmet restaurant. The rates here are steep, but guests who want to experience luxury in Paris (and can afford it) should give the Saint James a look. 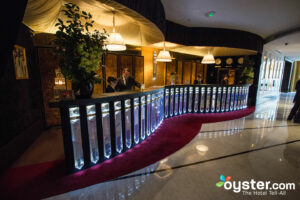 Located on the Champs Élysées, the Fouquet's Barrière is one of the most famous and exclusive luxury hotels in Paris. It has a slightly modernized Haussmann-style exterior, while interior design combines baroque, surrealist, and classic style elements with contemporary flair. Sophisticated rooms start at 400 square feet, and black marble bathrooms have separate showers and tubs as well as TVs in the mirrors. The extensive features include three restaurants (one Michelin-starred), an upscale spa, and a gorgeous indoor swimming pool. The hotel deserves its five-star status, but this level of luxury comes at a very high price 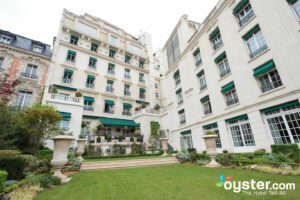 Guests at the 101-room Shangri-La Hotel Paris receive the five-star treatment in this former palace, built by Napoleon for his grandnephew. Because of its meticulous restoration and attention to detail, Shangri-La feels like a boutique hotel, or a museum in which you can spend the night. Two Michelin-star restaurants and the unparalleled views of the Eiffel Tower from balconies -- and even from some guest room bathtubs -- mean Shangri-La truly lives up to its reputation as a top luxury stay. 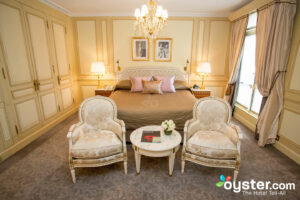 From its luxurious Louis XVI decor to its Michelin-starred restaurant, Le Meurice feels fit for royalty. The regal five-pearl hotel is situated directly across from the Tuileries Garden and is a short walk to several attractions including the Louvre. Rooms are spacious and feature lavish decor with period furniture, modern amenities, and palatial en-suite marble bathrooms with a separate tub and shower. The hotel also features an elegantly eccentric Dali Restaurant (he was a frequent guest of the hotel), a cosy bar, a spa, a small fitness center, and a large banquet venue. Rates are exorbitant, however, and fees for Wi-Fi use in common areas as well as a pricey breakfast only add to the expense. 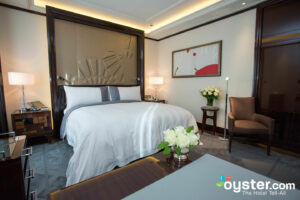 The 200-room Peninsula Paris, located in the 16th arrondissement near the Arc de Triomphe and Champs Elysees, is one of the city's top luxury hotels and rivaled only by a handful of competitors (Shangri-La Paris and Hotel Plaza Athenee among them). It reopened in 2014 after a four-year, multi-million dollar restoration, and the historic property offers guests opulent interiors and a high level of service made possible by the 600 staff members. Several dining and drinking options include arooftop restaurant with beautiful panoramic views over the city, a sumptuous lobby bar with outdoor terrace, and a lavish Cantonese restaurant. The hotel also has a full-service underground spa with lovely pool and two fitness rooms. Rooms, which are some of the largest in Paris, feature elegant decor in neutral tones and a bounty of high-tech details, including tablet-operated lights, temperature, and valet calls (though the controls may strike some as too complicated). 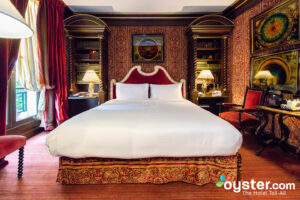 A chic, 20-room luxury boutique hotel in the elite St. Germain neighborhood of Paris, L’Hotel is cozy and artistic, each decoration and service thoughtfully rendered. It's pricey, to be sure, but other upscale boutiques nearby, such as the Hotel d'Aubusson and the Relais Christine, are often just as much (or more) -- and the rooms there aren't quite as special. L'Hotel has impressive features for such a tiny property, such as an underground spa pool and Michelin-rated restaurant. It's hard to find another hotel that matches the L’Hotel’s rich history, elegance, and character -- though the age of the building can make for some small spaces, including a tiny elevator. 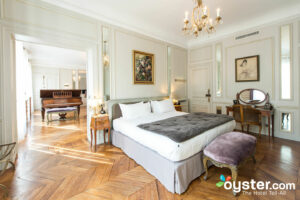 The 57-room boutique Hotel Lancaster is a gem, a very expensive, finely cut and cared for gem, that envelops guests in an atmosphere of intimacy and privilege. Marlene Dietrich lived here in the 1930s, and the Marlene Dietrich Suite is available for those who want to vacation in the movie star’s stilettos. Built in 1889, the Lancaster is close to the Champs Elysee but hidden away, a discreet, elegant escape from the 21st-century tech and neon chaos that now permeates the famous avenue. 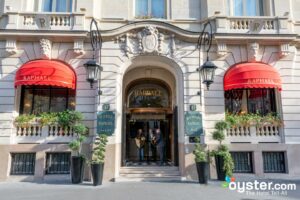 The Raphael is a luxurious hotel situated in one of Paris's swankiest neighborhoods on a tree-lined avenue a block from the Arc de Triomphe. Classical Old World interiors are elegantly finished throughout, nowhere more so than the 83 extraordinarily spacious rooms and suites, complete with plush carpeting, antique wood furnishings, and airy white-porcelain bathrooms. Unparalleled views over Paris from the rooftop garden are a real delight, while eating and drinking options are world class -- though duly expensive. The decor might all be a bit over the top for some, and health facilities feel like an afterthought, though for guests whose wallets can take it, this is one of the finest places to stay in the French capital. 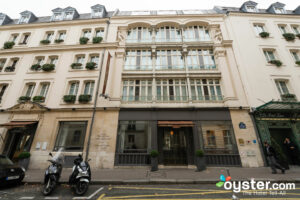 The Bel Ami is a bright, modern luxury hotel in the heart of the famous Saint-Germain-des-Pres, among Paris's most fashionable neighborhoods. The 108 rooms and suites have free Wi-Fi, minibars, iHome docks, and sleek bathrooms. There are also a small fitness center, a spa with a sauna and treatments, a bright bar with unusual cocktails, and a restaurant that serves a buffet breakfast and an extensive weekend brunch. However, the opening hours of some of the facilities are less than convenient -- the spa is closed on Monday and Tuesday and the restaurant is only open for weekday breakfast and weekend brunch. Fortunately, the hotel offers 24-hour room service for guests who don't want to eat out in one of the numerous restaurants in the historic neighborhood.