Considering a Caribbean vacation? While it may seem like an easy decision, there are a few things to consider before you book your flight. Chief among those should be, "When is the best time to visit the Caribbean?" The answer depends on your personal travel style, your tolerance of crowds (or aversion to them), the distance you're comfortable flying, and your budget. From crowded resorts in the winter to the threat of hurricanes in the summer and fall, the decision can be tricky. With that in mind, we've come up with some travel hacks to help you plan the best time for your Caribbean vacation (and to help you avoid the worst).

For our breakdown of the most and least visited islands in the Caribbean, check out our article here.

Winter in the Caribbean: Perfect Weather, Expensive Hotels, and Crowds 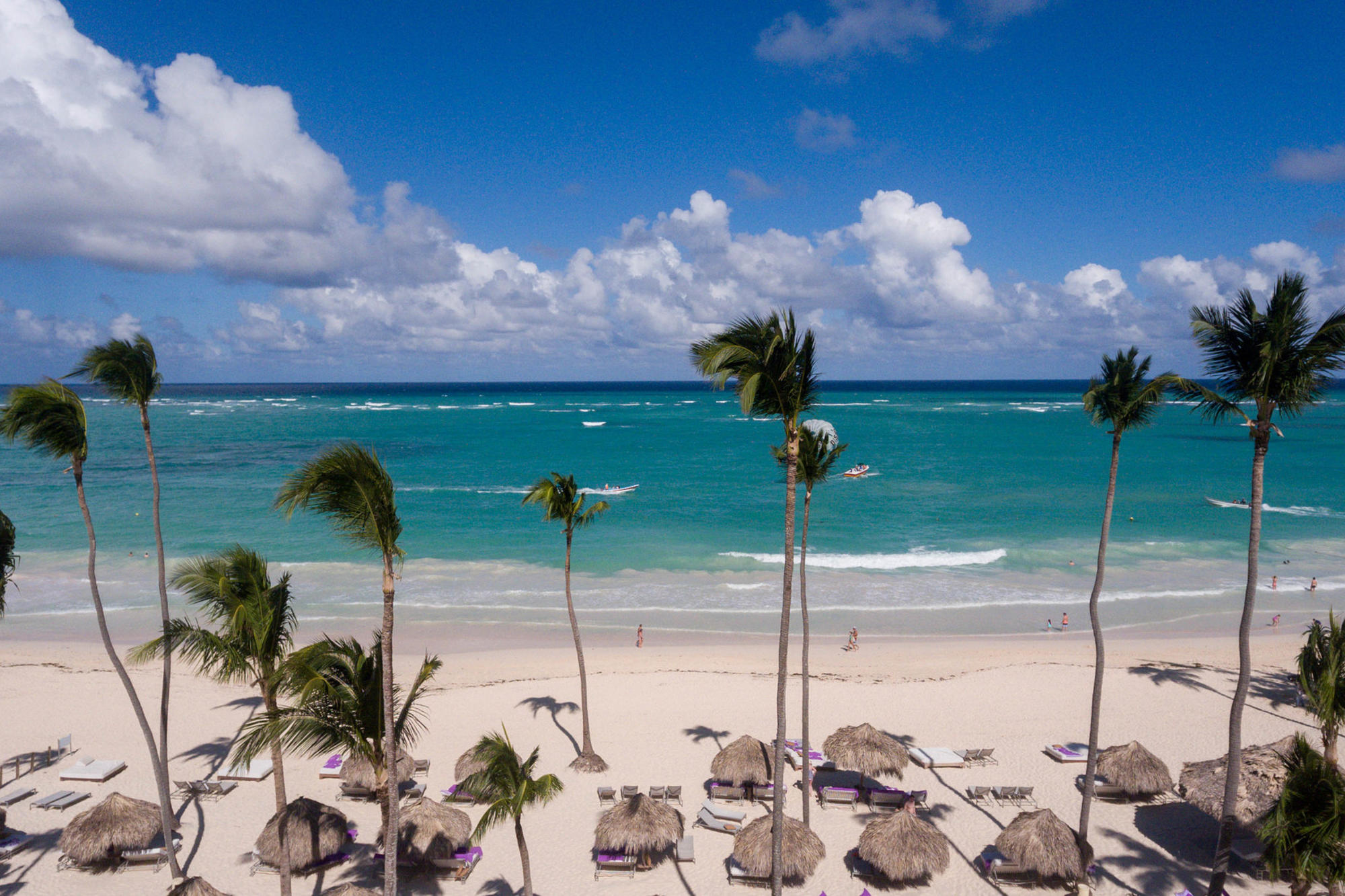 Winter in the Caribbean is perfect — at least when it comes to the weather. The hundreds of islands across this region are warmed by the sun nearly every day, there are few rain showers, breezes are gentle, and temperatures are warm to hot during the day. Humidity also stays blissfully low at this time of year, meaning nights are incredibly comfortable for sleeping, drinking, partying — or doing whatever your heart wants to do on vacation.

Keep in mind that you’re not the only person hoping to spend their winter vacation on the beach in the Caribbean. Crowds at this time of year surge across the region. You’ll find that especially true in resort-heavy destinations like Jamaica, the Bahamas, and the Dominican Republic (particularly in Punta Cana). If you’re looking for slightly smaller crowd sizes, it can pay to step off the radar — or at least a little farther from it than you might think. Islands like Anguilla, Nevis, and Cat Island in the Bahamas will likely be less crowded (you can see our full list of underrated Caribbean islands here).

While you can avoid the crowds by strategically picking your Caribbean destination, you’ll have to contend with high-season rates no matter where you are. Anguilla, for instance, is one of the more expensive islands in the region year round, despite its relatively low number of annual tourist arrivals. Wherever you choose to travel, you’ll find hotels at their most expensive during the winter holidays. Those include Christmas and New Years, plus Martin Luther King, Jr. Day weekend, President’s Day weekend, around Valentine’s Day, and during the early spring break weeks of March.

Spring in the Caribbean: Crowds Thin and the Weather Is Warm, Though Prices Can Still Be High 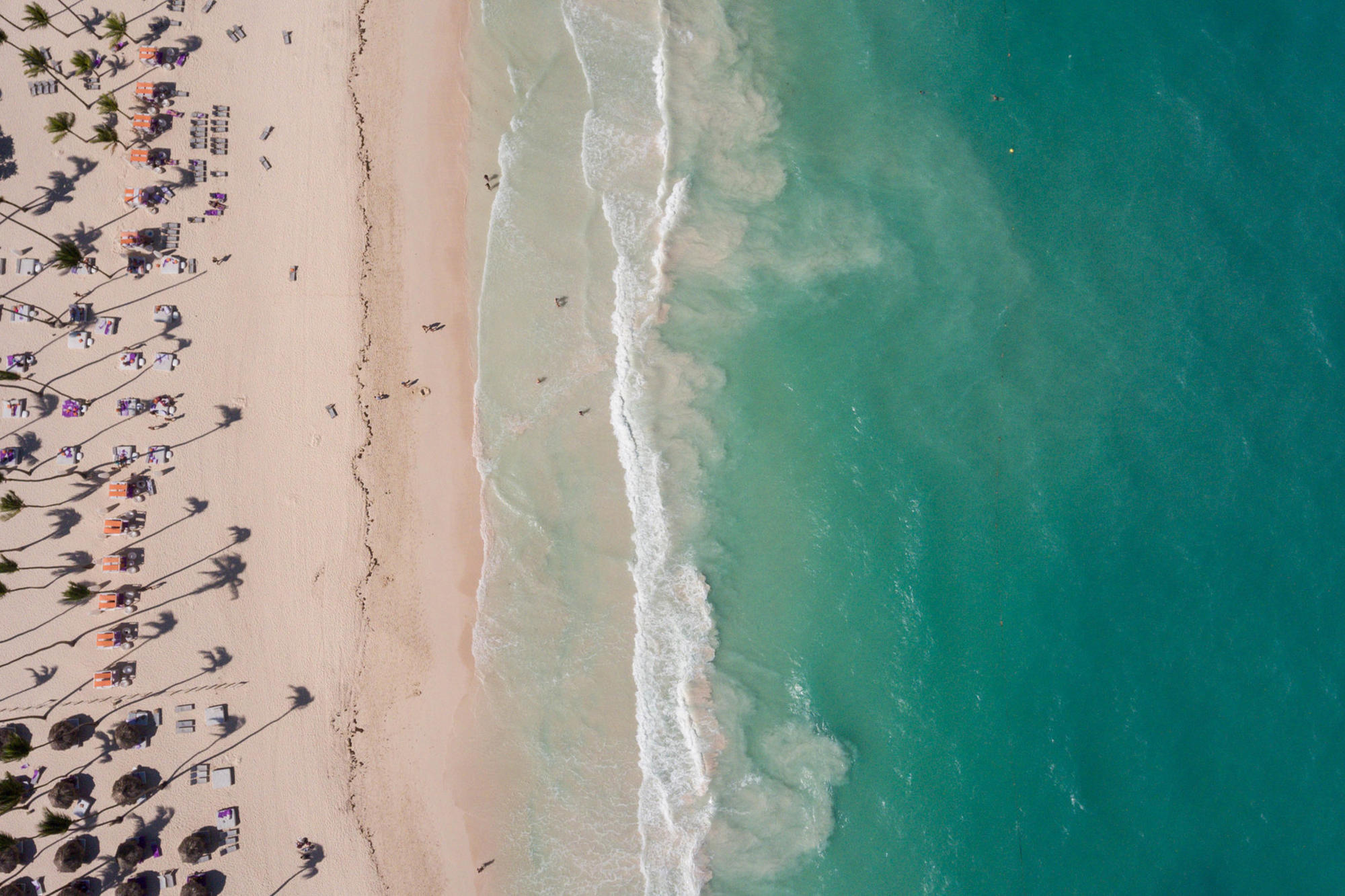 Once the winter crush is over, the Caribbean is generally a far calmer place — with one caveat. The Easter holiday and various college and local school district spring breaks can mean that you’ll still find some weeks where hotels are sold out far in advance and flight prices are spiking. That’s particularly true during March and April, when you’ll want to book your flights and hotels well in advance. By May, everything has definitively settled down — you’ll find almost every beach destination to be far less crowded, especially popular areas like Punta Cana, Montego Bay, Negril, Nassau, and Paradise Island. Additionally, hotel rates in May will be lower than what you’ll find during the March spring break season and over the Easter holiday.

So what’s the advantage of traveling to the Caribbean in the spring? The weather is still nearly perfect. Most of the tourist towns are lively enough for travelers who want to explore a bit or socialize, and you’ll find very few days washed out by rain. Temperatures do get a bit warmer, especially toward late May and into early June. And the risk of cloudy days and high humidity also increases as the spring season draws to a close. Even so, a Caribbean vacation in the spring does mean you’ll likely come home tan and recharged. And with more money in your pocket than during peak season.

Summer in the Caribbean: Hot and Humid in the North, But Bargains and Sun in the South 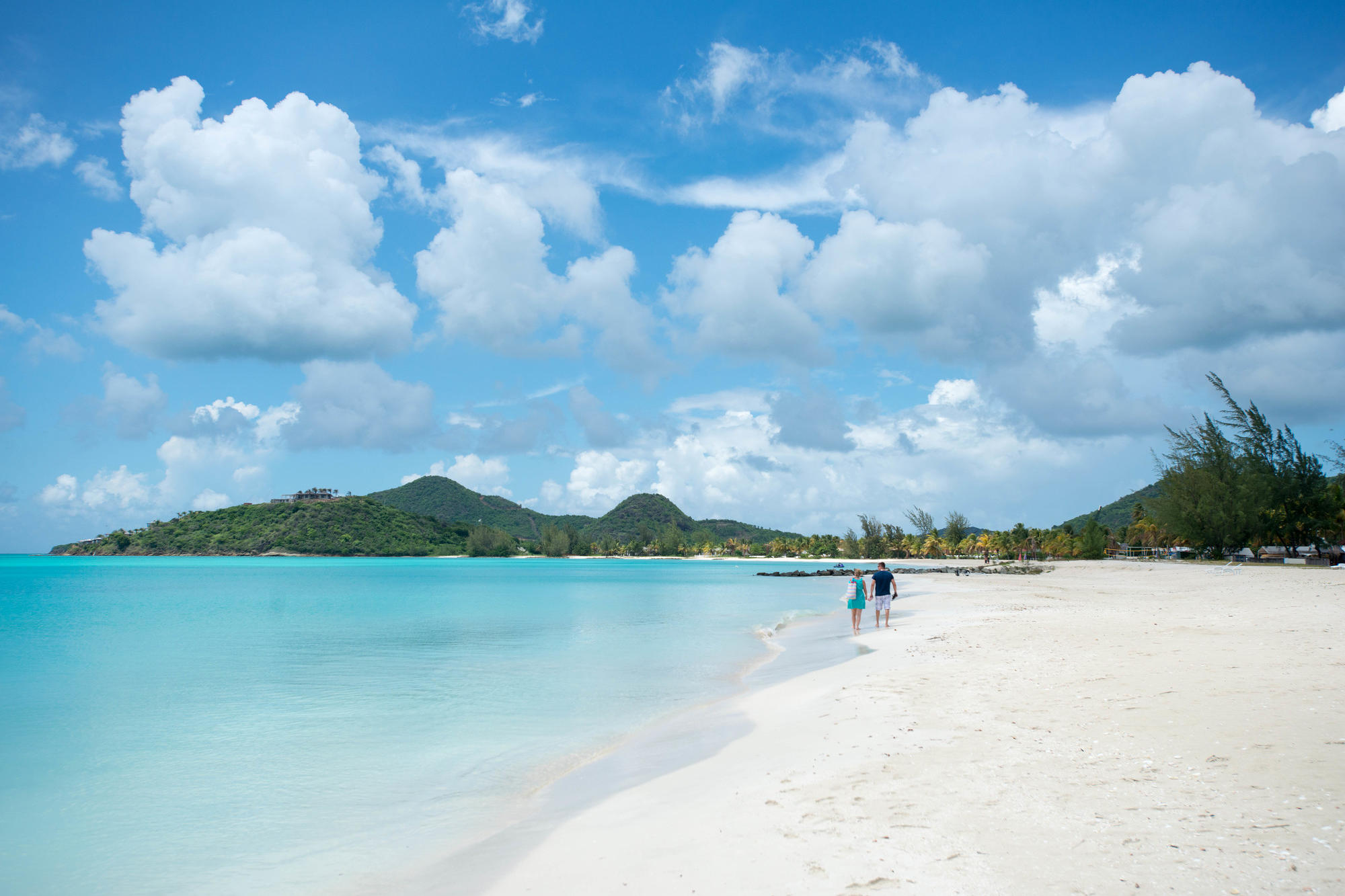 By the official start of North America’s summer in late June, it’s officially low season in the Caribbean. Most travelers from the United States and Canada are content to stick around their countries as it’s finally nice enough to enjoy destinations closer to home. That translates into far fewer crowds in the Caribbean — especially across northern Caribbean countries like the Bahamas, Turks and Caicos, the Dominican Republic, and Puerto Rico. You see, by late June the temperatures in the northern Caribbean are soaring, humidity is high, and rain is a threat. This part of the region is also squarely in the hurricane zone, and hurricane season officially kicks off in June. June is one of the wettest months in the northern Caribbean, and while showers are generally an afternoon affair, there is no guarantee that they won’t sock you in for a day or more.

However, the Caribbean islands in the south have a different weather pattern, making summer a good time of year to consider visiting. These include Aruba, Bonaire, and Curacao (the ABC islands) as well as destinations like Trinidad and Tobago. The tradewinds and latitude here generally mean that skies are clearer and rain is less prevalent than in the northern Caribbean. That means European, Canadian, and American families often head to the southern Caribbean throughout the summer months to take advantage of summer breaks from school. Even so, the crowds are thinner than during the winter holidays, and you can still find bargains on hotels compared to the winter season. 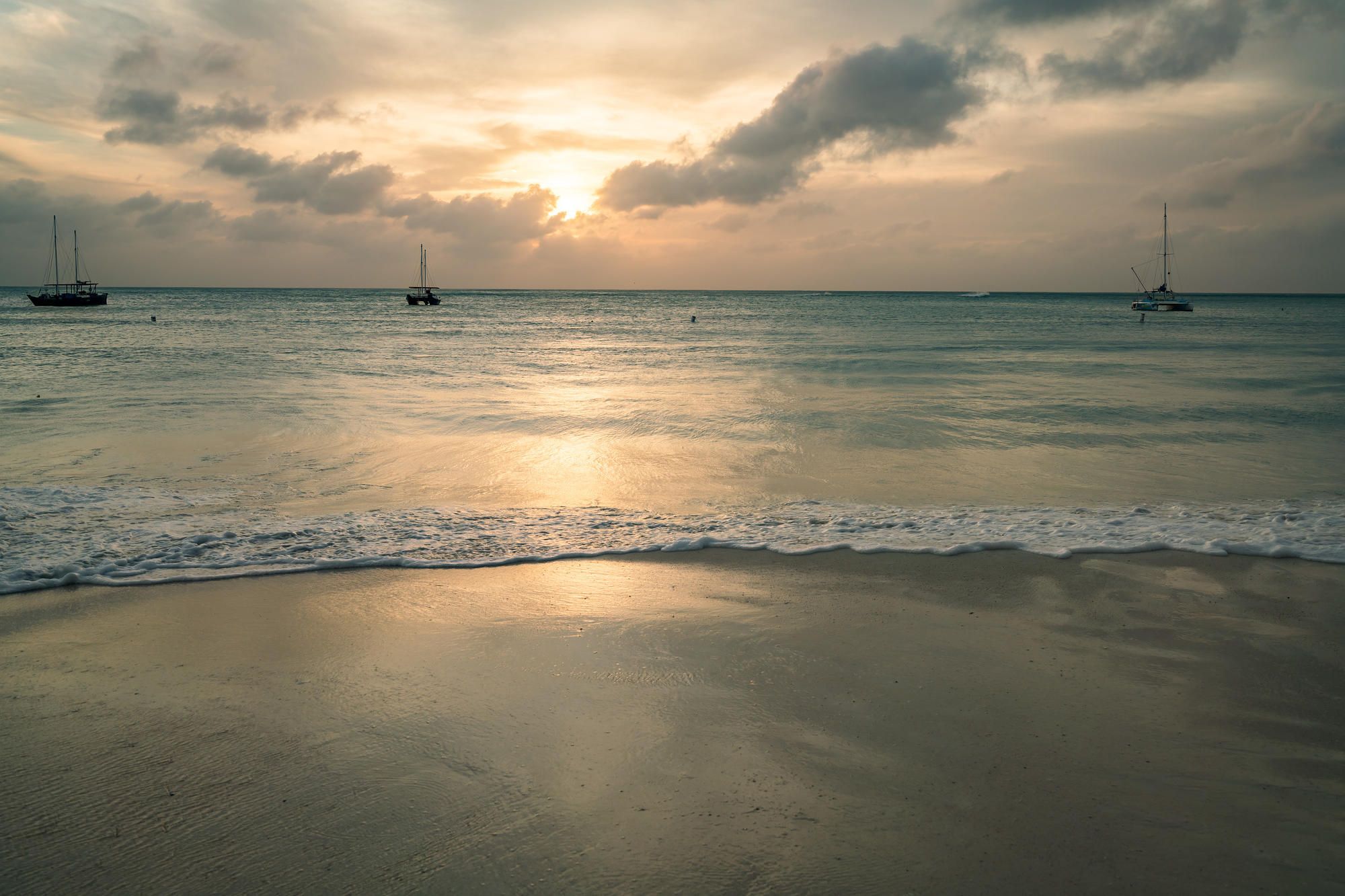 Prices across the entire Caribbean region are lower during the fall months than during the winter and spring break seasons. While hurricane season officially stars in June, it reaches its peak in the months typically associated with fall in North America and Europe. The major hurricanes that have struck the Caribbean since 2017 have all occurred during this time of year. While they are statistically rare — you’re more likely to encounter sunny skies than a hurricane — it is something to consider when you are planning. This is especially true for the Leeward Islands, the central Caribbean (including Puerto Rico and the Virgin Islands), and the northern Caribbean (the Bahamas and Turks and Caicos).

This time of year can also see more cloudy days and the chance of afternoon showers — especially through mid-November. By early December, though, you’re likely to find the same weather as during January and February. What’s more? Hotel rates for the first two weeks of December are still on par with what’s offered in low season. With that in mind, travelers who have flexible schedules and want to enjoy the Caribbean’s sunny weather should plan a trip for the first two weeks of December.

In the southern Caribbean, hurricanes are much less of a threat — in fact, the ABC islands, Trinidad, and Tobago are all outside of the hurricane belt. While that doesn’t mean a hurricane can’t affect these islands, statistics are in your favor for avoiding one if you travel to this part of the region.

What to Pack on Your Caribbean Vacation:
For info on these editor-selected items, click to visit the seller’s site. Things you buy may earn us a commission.