Fact: Few things in life are better than a tropical vacation. Another fact: We love hidden gems. While plenty of the Caribbean has been overrun by huge all-inclusive resorts and massive cruise ships, there are still a number of under-the-radar islands out there. Over the years, we've criss-crossed the region, visiting its best hotels and coolest destinations. We've also seen just how intense crowds can be in places like Punta Cana and Montego Bay. With that in mind, check out our nine favorite underrated Caribbean islands before you plan your next Caribbean vacation.

If you want to know which Caribbean islands are the most and least crowded, check out our breakdown here.

Nevis: Lush Jungle Landscapes and a Dash of Luxury

The smaller and less developed of the two islands that make up the Federation of St. Kitts and Nevis, Nevis is an unspoiled paradise with a lot to offer. Friendly people, pristine beaches with beautiful blue waters, and lush tropical rainforests make this island spectacular. It’s an ideal place for couples seeking seclusion or a quiet romantic getaway. There are several villa-style properties on the island, though it’s somehow remained off of most tourists’ radar. Underwater adventurers are also welcome, as the island sits close to Booby High Shoals, which is a great destination for divers.

Our Hotel Pick on Nevis: The Four Seasons Resort Nevis 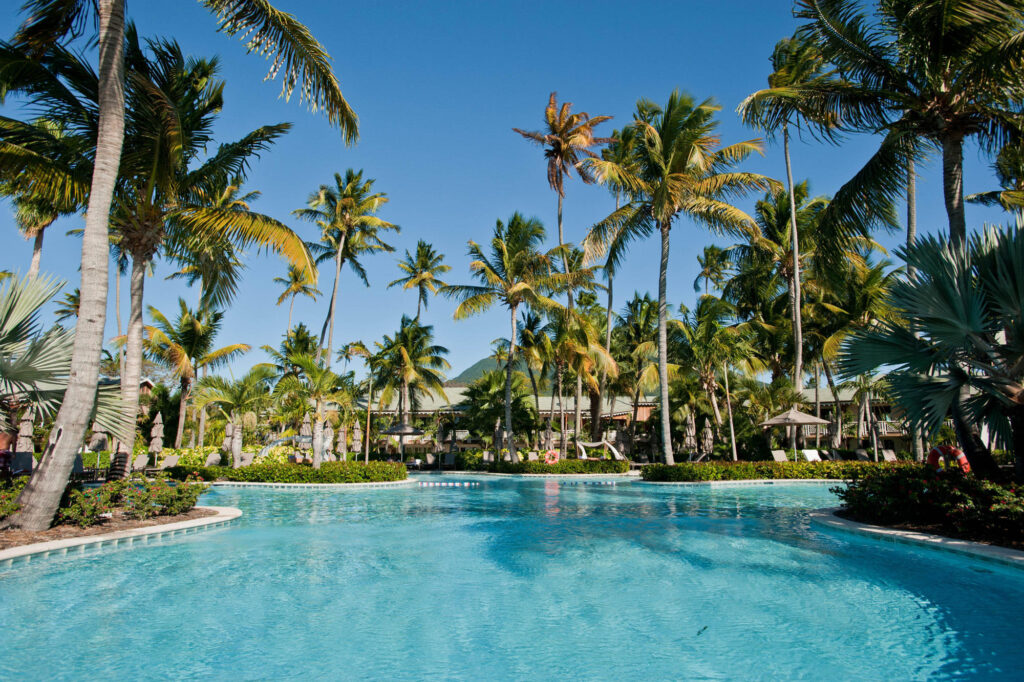 We love the Four Seasons Resort Nevis for its lush grounds, spectacular 18-hole golf course, gorgeous, Ralph Lauren-meets-island inspired rooms, delicious restaurants, and tons of on-site amenities. It’s one of the original luxury outposts on the island and remains one of its best. 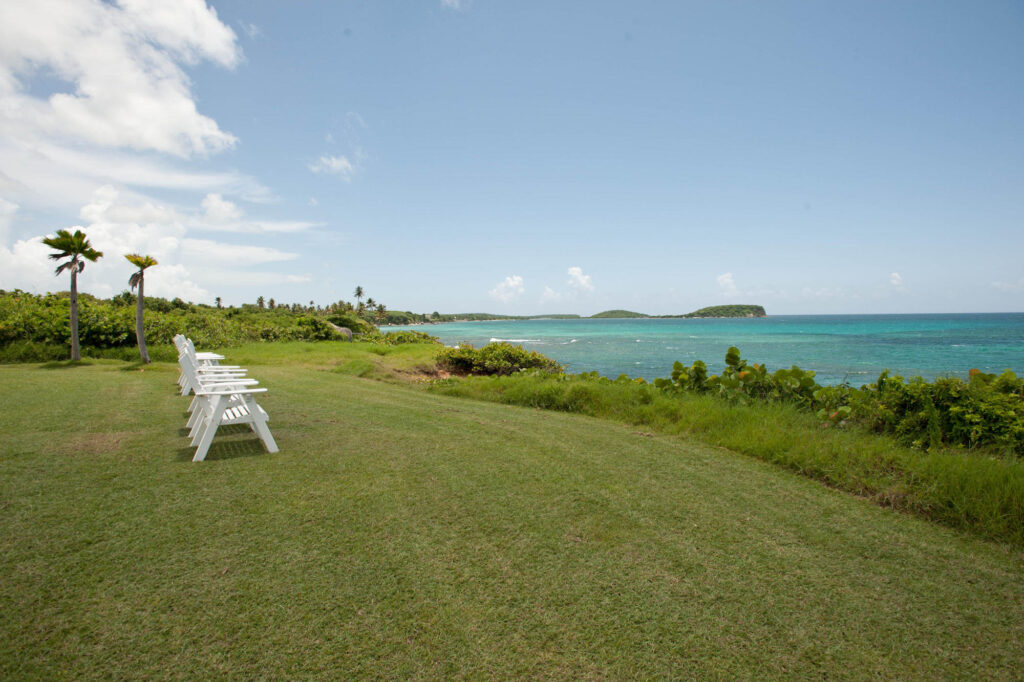 While Vieques is hardly a secret, it’s on our list because — well — Vieques has been through hell and come out the other side looking as beautiful as ever. Ravaged by Hurricanes Irma and Maria in 2017, there was a time when it wasn’t clear if Vieques would or could recover. However, that process is well under way. These days, the island is free of major resorts (the W Retreat that once called Vieques home has not reopened after the hurricane). That boutique-only ethos means that everything from restaurants to beaches all feel somewhat like they’re yours and yours alone. Ok — you’ll be rubbing elbows with other tourists in the bars of Esperanza — but still, Punta Cana and San Juan this is not. The island has no chain restaurants, golf courses, or built-up tourist attractions. Instead, you come here to relax and unwind, and take in its natural beauty. A must-see sight is the island’s famous bioluminescent bay which appears to glow in the dark at night. 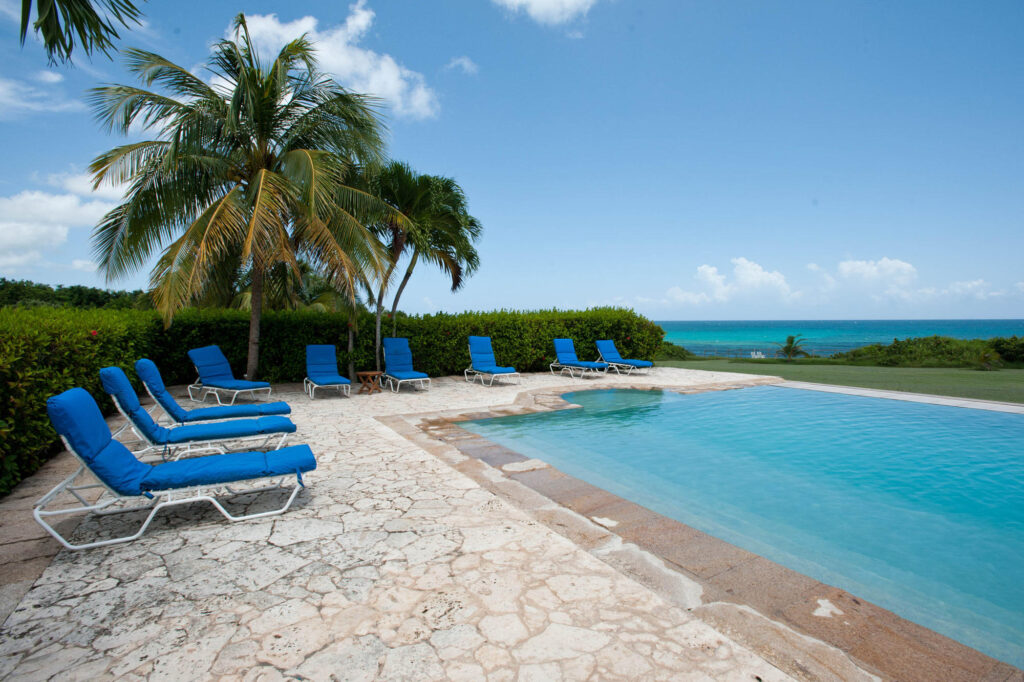 As of 2020, Blue Horizon Vieques is back open and just as charming as it was before the hurricanes. One of the few hotels on Vieques that actually abuts the sea, you’ll get amazing views, visits from wild horses, and quaint vibes galore here. The hotel is a bit far from Esperanza to reach on foot, and renting a car is recommended (that goes for anywhere you stay on Vieques).

Isla Mucura, Colombia: A Roadless Gem Ready to Be Explored

There aren’t too many Caribbean islands that really take you off the beaten path left out there. But Isla Mucura is one of them. Situated off Colombia’s northwest coast and near the slightly larger San Bernardo Island, Isla Mucura is the kind of place where you won’t even find official roads. Footpaths lead through the lush jungle to its small handful of hotels, tiny villages, and picture-perfect beaches. You’ll also have to get here by boat, as there is no airport or nearby islands with airports. Is it undiscovered? No. You’ll need reservations at any of its few hotels well in advance. However, the lack of large-scale development keeps Isla Mucura feeling lightyears away from the rest of the Caribbean. In case you’re wondering what there is to do on Isla Mucura, the answer is nothing. And that’s precisely the point. 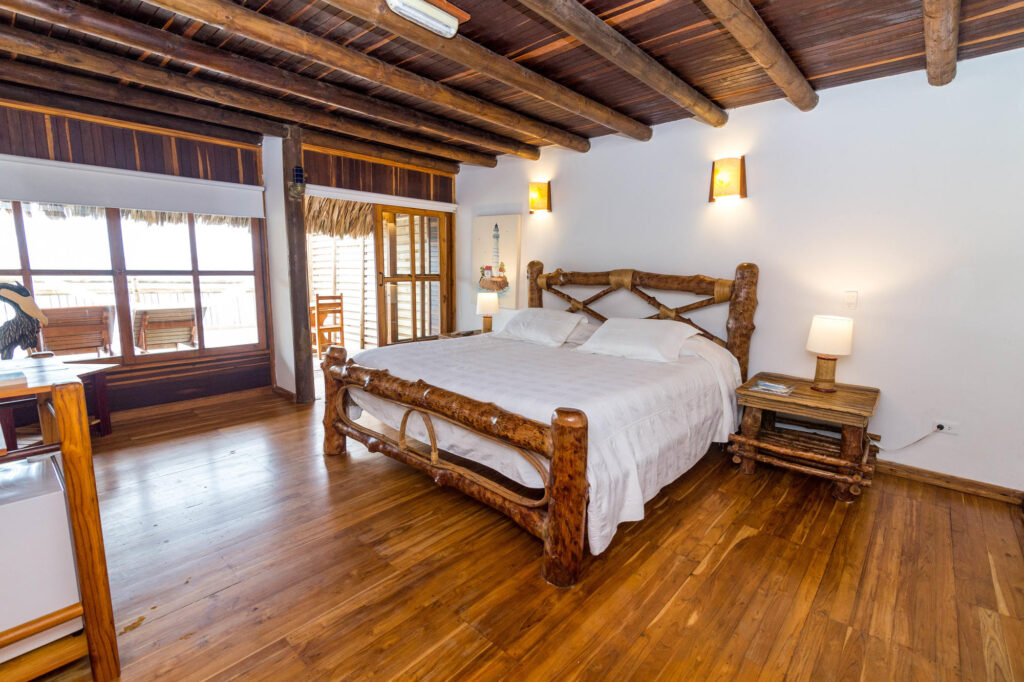 While there are far prettier beaches on Isla Mucura, Punta Faro has a charming, unplugged vibe that feels just right for paradise. You’ll score rustic rooms and just enough amenities to keep things officially modern. You’re also a quick footpath walk from one of the main beaches on the island.

Bonaire: A Diver’s Paradise With Perfect Weather Year Round 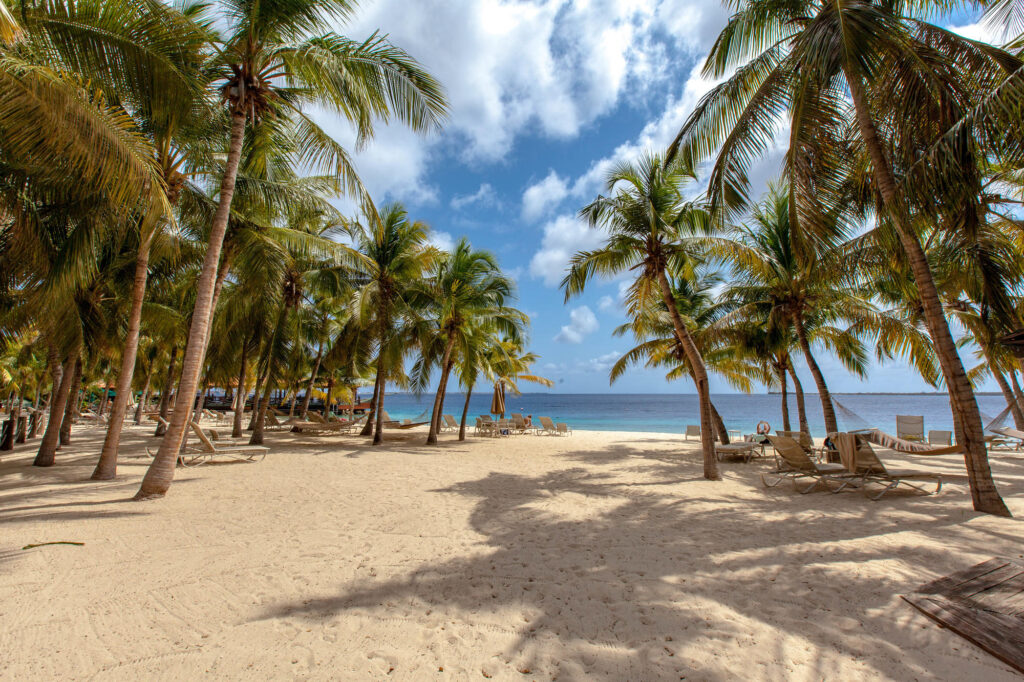 When it comes to a diver’s paradise, it’s hard to top Bonaire. Near Curacao and Aruba, this tiny island combines all the bliss of a tropical vacation with exceptional underwater adventures. You’ll find numerous dive resorts in and around Kralendijk — the island’s capital. However, you don’t have to be a scuba pro to enjoy the sea life around Bonaire. There are several beaches and inlets where snorkeling will provide amazing experiences, including the waters off of Klein Bonaire or 1,000 Steps Beach. And while the beaches here are nice, they aren’t the reason you come to Bonaire. So if you’re only looking to sunbathe and sip tropical cocktails, the island may not be for you. If you have a bit of adventure in you, though, Bonaire should be on your radar. 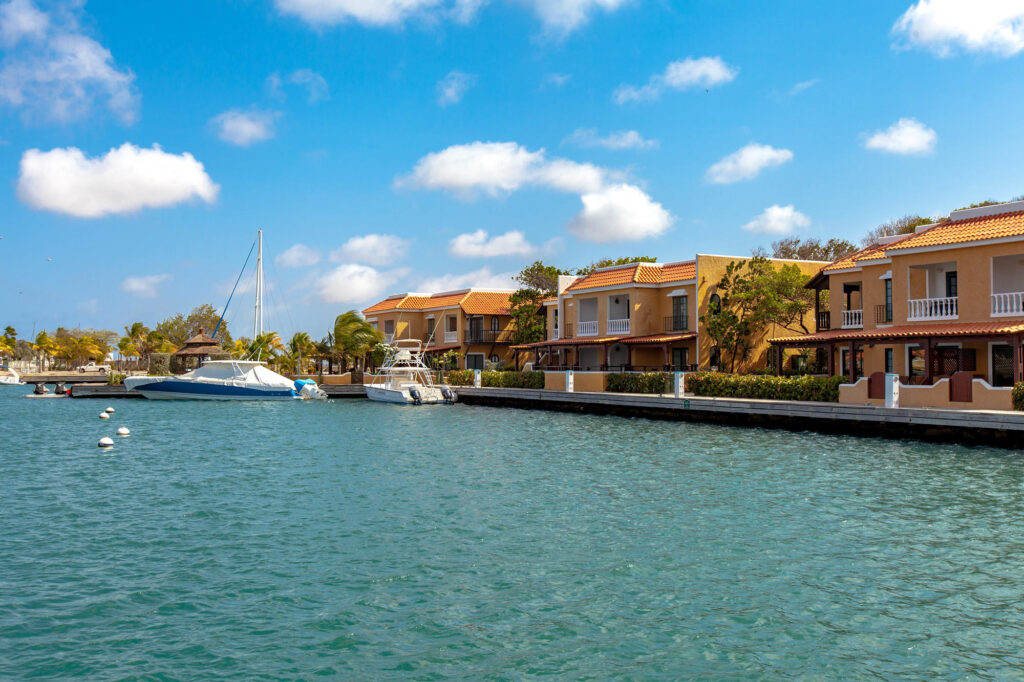 Hotels on Bonaire are simple affairs, with a laid-back vibe and sometimes limited amenities (except, of course, for those associated with diving). While you’ll still find a laid-back, barefoot vibe at Harbour Village Beach Club, the hotel puts an extra layer of polish on your stay. Expect extras like Nespresso machines and direct access to the beach from some rooms.

Cat Island, The Bahamas: Perfect for Escaping the Real World 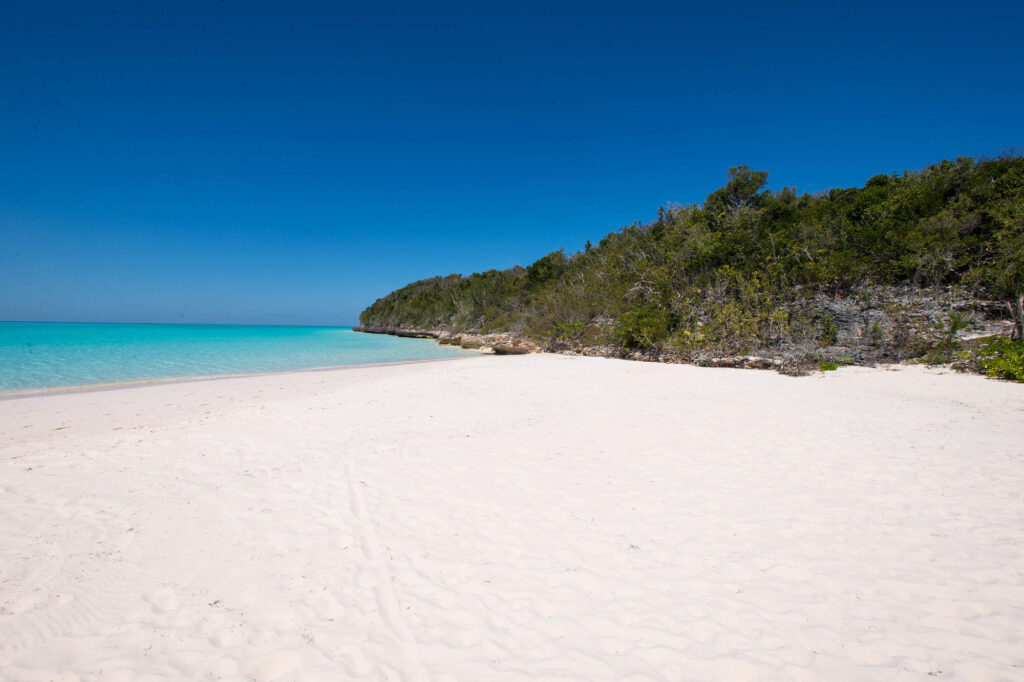 With only 1,500 residents spread out across over 150 square miles, to call Cat Island uncrowded is an understatement. Even with tourists included, the island feels blissfully away from the rest of the world. There are no major resorts here — only small boutique hotels or bed-and-breakfasts. That helps keep this corner of the Bahamas well off of the major tourist radar. And we are thankful that is has (and thankful that it was spared by 2019’s Hurricane Dorian). From perfect white-sand beaches to aquamarine water lapping lazily at the shoreline — every inch of the island is free of loud beach clubs, boozy beach bars, and packs of drunk spring breakers. There are a few casual restaurants serving excellent local fare, but aside from wandering the lush landscape and lazing on the beach, the whole point of visiting Cat Island is unplugging and escaping the real world. 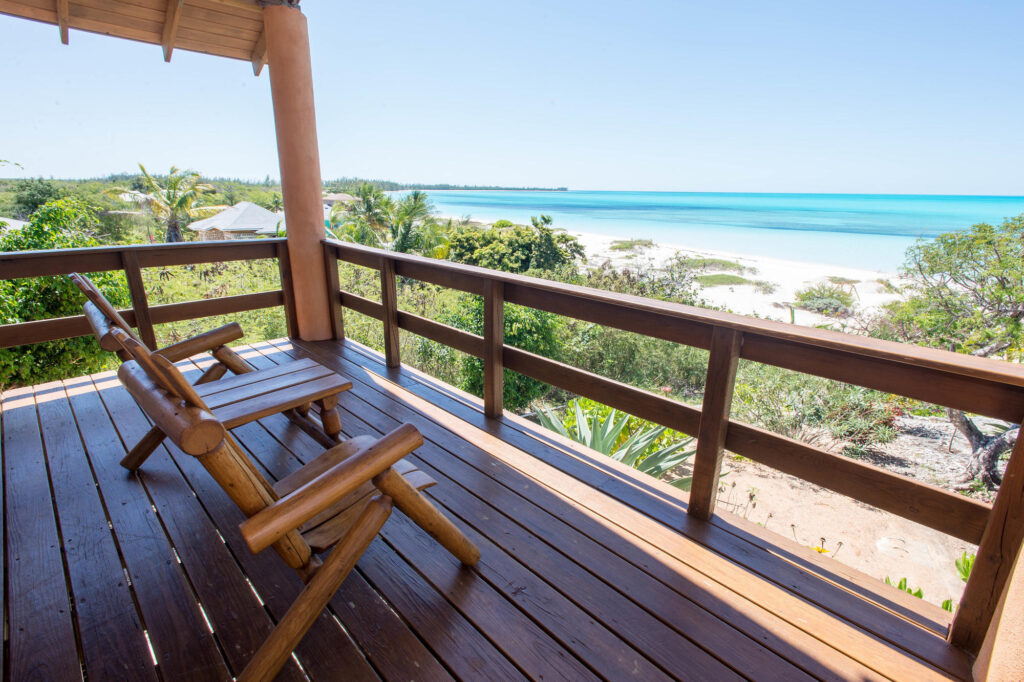 If you’re really looking to unplug, this is the spot to do it. Shanna’s Cove Resort is situated along one of Cat Island’s prettiest beaches. In fact, it lacks Wi-Fi, so you have no choice but to disconnect from the pressures of the real world. There’s a rustic, romantic vibe to the place and it’s great for couples looking to spend a little quality time together in paradise. Bonus points for the on-site restaurant, which slings great meals, as well as the free kayaks. 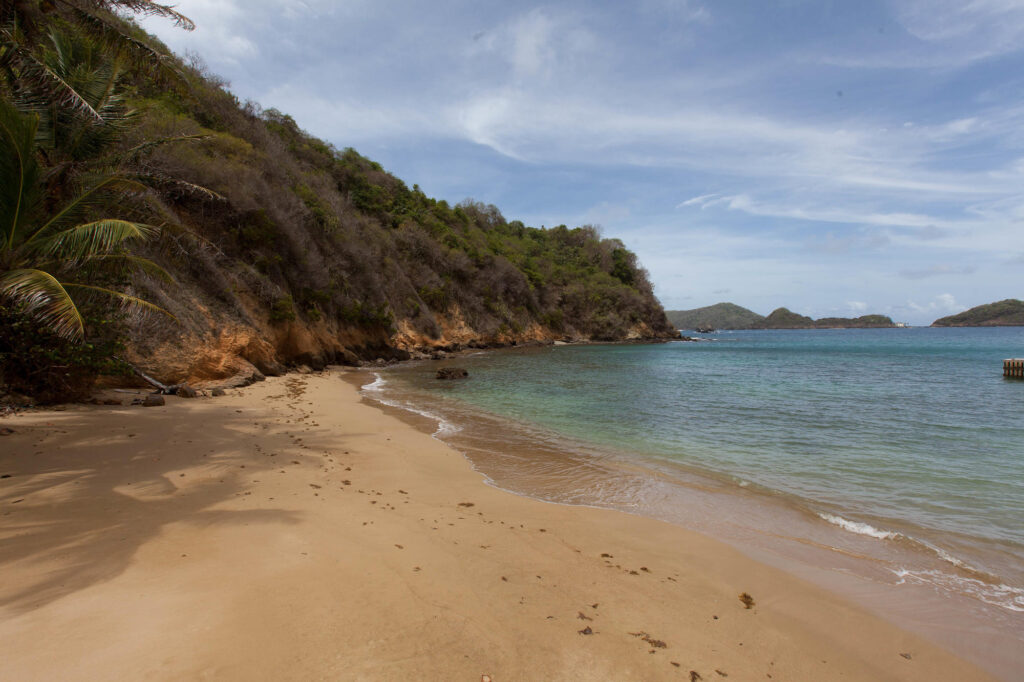 Beach at the Blue Waters Inn/Oyster

Just off the coast of Venezuela, Trinidad and Tobago are the southernmost of the Caribbean islands. While Trinidad is larger and more industrialized, Tobago is the smaller and less developed of them. And that’s a great thing for travelers looking to get a little farther off the radar. You see, there are no major hotel chains on Tobago, and most properties are operated by locals who’ve purposely built their properties into the landscape. While Tobago isn’t known for its stunning beaches, if you stay away from the Atlantic Ocean side of the island, you’ll find several stretches of sand where you can post up and get some sun. You’re coming to Tobago for the island vibe — and it delivers on that slow-paced, drink-in-hand front.

Our Tobago Hotel Pick: The Villas at Stonehaven 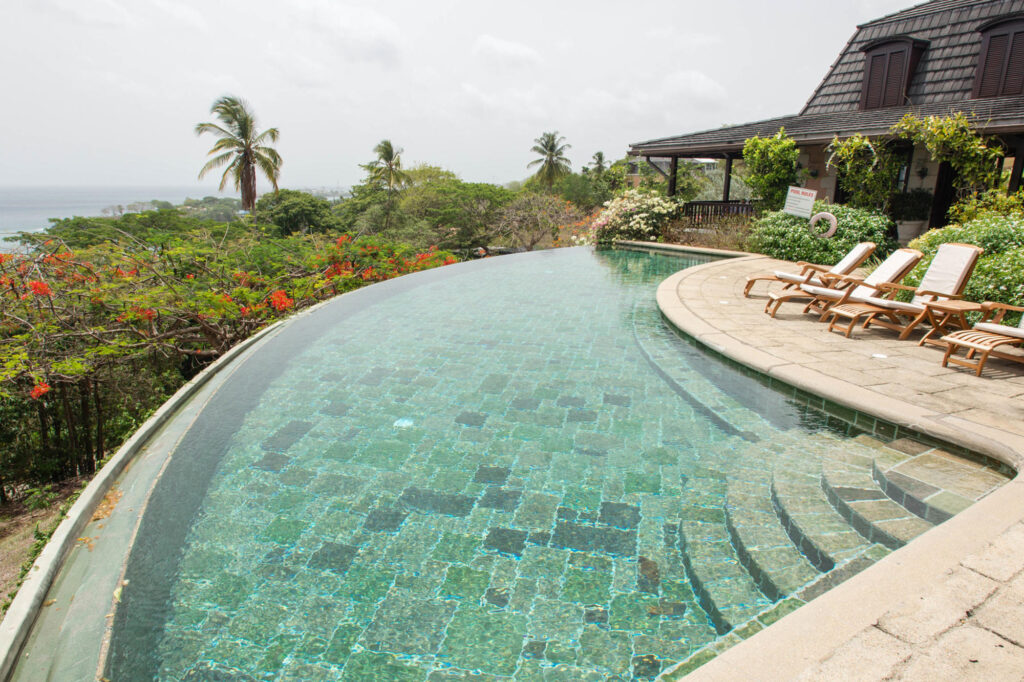 It’s not on the beach, but if you’re after a fresh, modern property that’s tailor-made for pampering, you’d do well to post up at The Villas at Stonehaven. We’re talking villas that are more like luxurious houses, complete with their own terraces and infinity plunge pools. Crown Point is the nearest town, and guests here will want a rental car to reach beaches like Pigeon Point (the island’s nicest).

Pricing for The Villas at Stonehaven 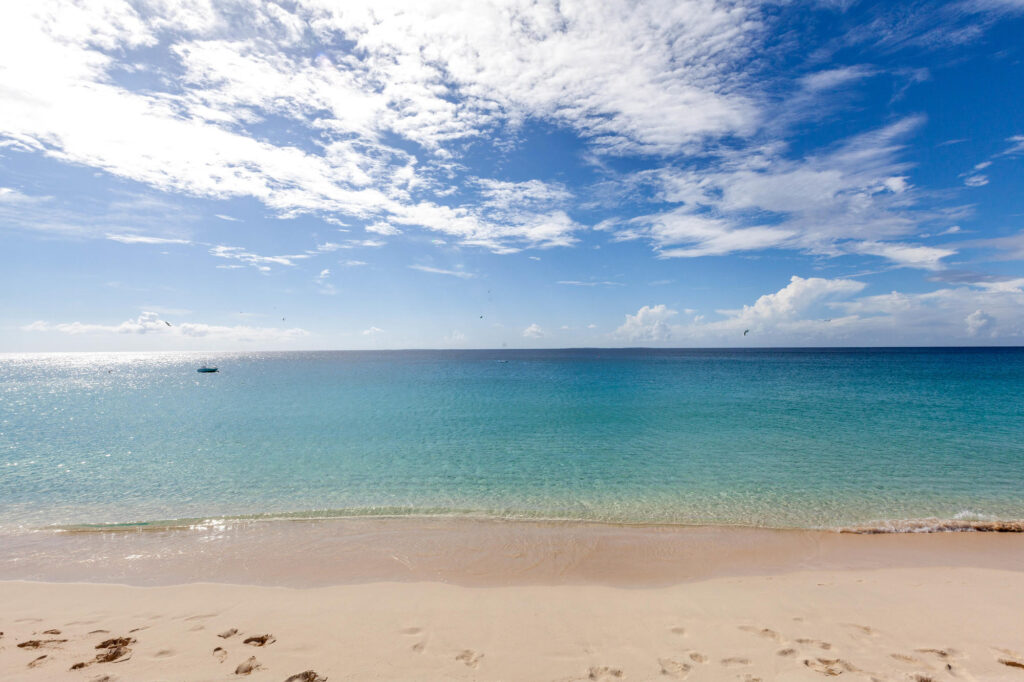 Beach at the Frangipani Beach Resort/Oyster

Anguilla was one of the island’s that were heavily impacted during 2017’s brutal hurricane season. However, after two years and lots of investment, things are mostly open for business. The island also has a lively dining scene that has made it something of a foodie destination in the region. That’s in part due to the huge influx of ex-pats who’ve flocked here to open businesses, bringing a wide variety of cuisines with them. It’s certainly one of the more upmarket islands on this list, and you shouldn’t expect any bargain deals on Anguilla. That, combined with Anguilla’s somewhat hard-to-reach status (there are no nonstop flights there as of early 2020), have helped this remain one of the least crowded Caribbean islands. And that’s something anyone can celebrate. 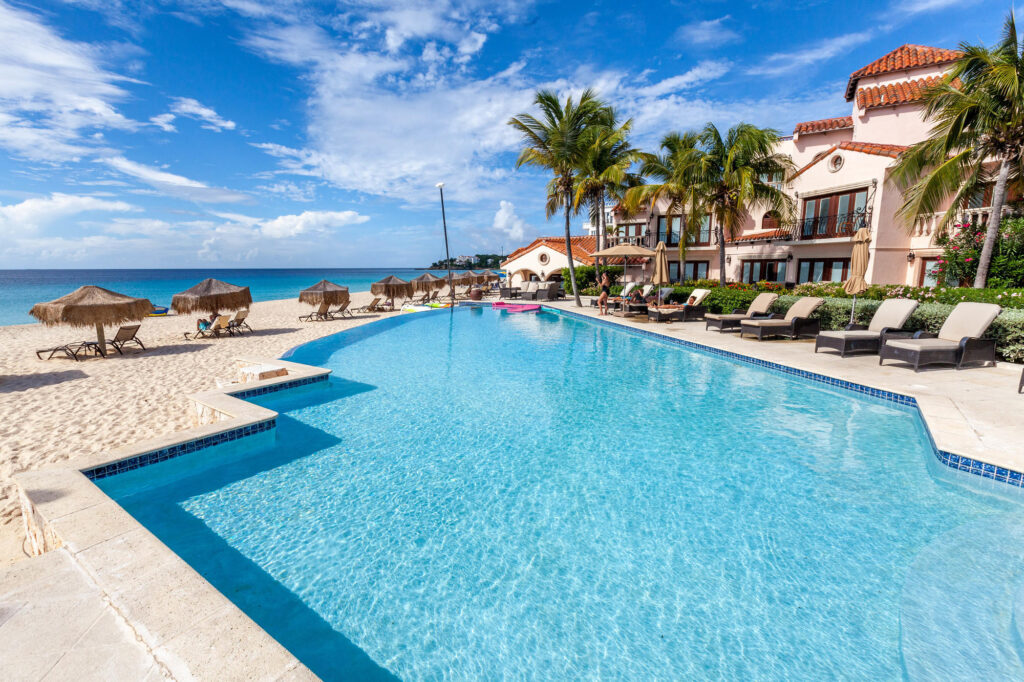 If you want to combine all of Anguilla’s big draws into one quaint package, Frangipani Beach Resort is right for you. You’ll score incredibly well-liked (and wildly popular) dining at the hotel’s Straw Hat Restaurant, as well as direct frontage on Mead’s Bay — one of the island’s nicest beaches. Rooms here are spacious and come in varied configurations — the best have direct sea views.

Grenada: Stunning Beaches and a Dash of Spice 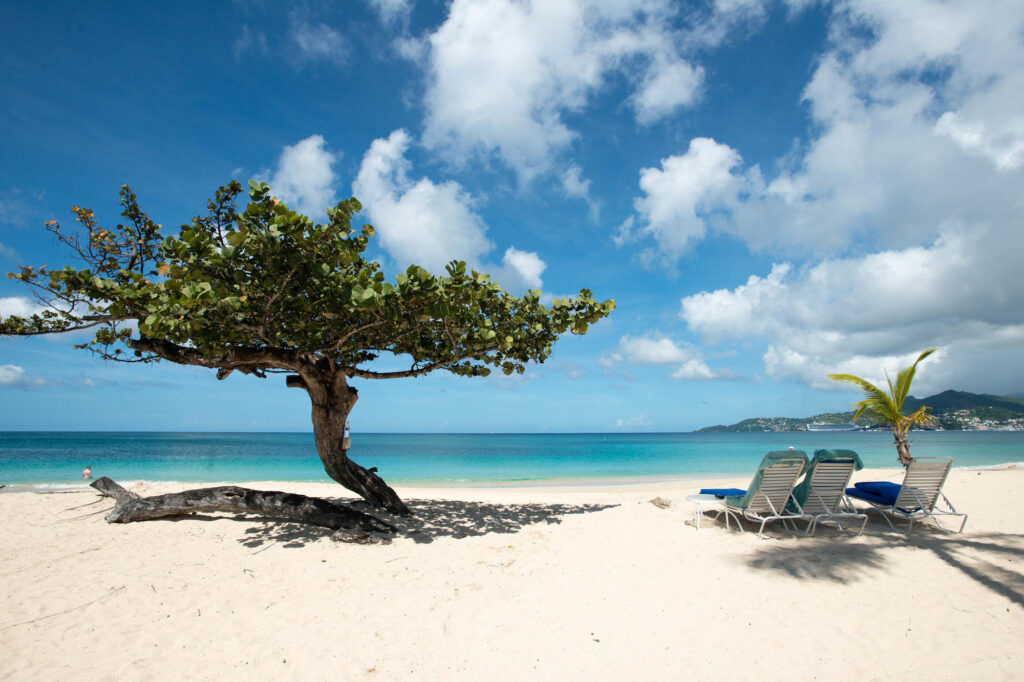 Once known as the Spice Island, Grenada is still one of the largest producers of nutmeg in the world. While that alone may not be enough reason to visit, trust us when we say that the island is as seductive as the scent of its most famous export. And yet, it receives far fewer tourists than its other Caribbean cousins. The island was spared a direct hit during the devastating 2017 hurricane season, and is all the better for it. A Caribbean vacation in Grenada is traveling the way it was meant to be — much of the island remains lush and undeveloped, and there’s just enough buzz in quaint Georgetown to keep things interesting (especially around the Carenage). You’ll find blazing white-sand beaches and turquoise water at Grand Anse and Levera National Park, excellent offshore snorkeling, and beautiful natural scenery at Grand Etang National Park. 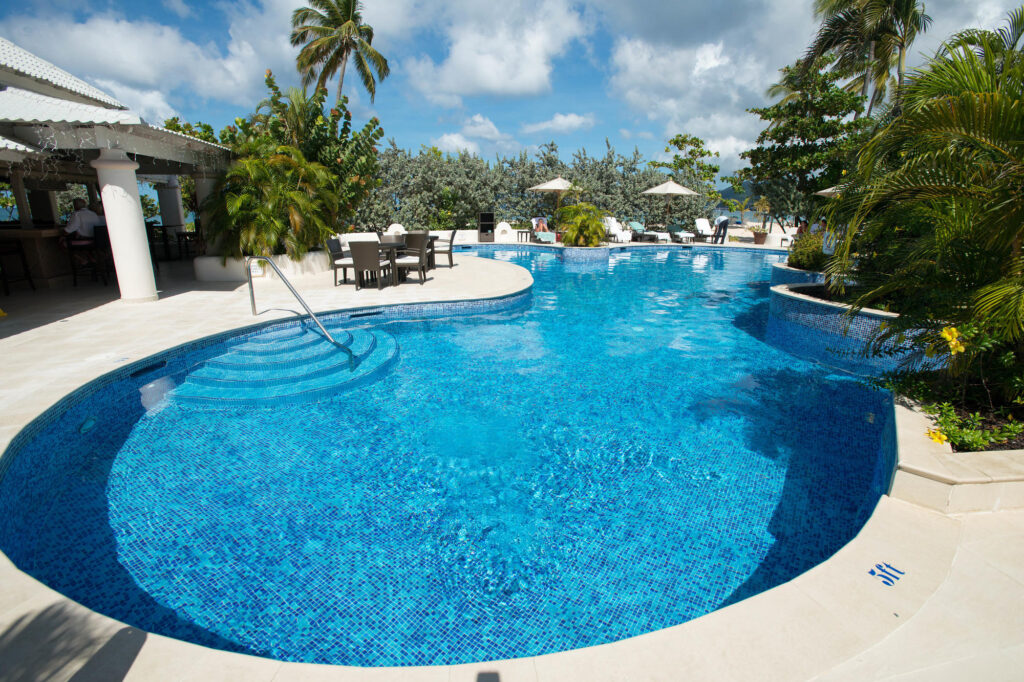 With its modern Caribbean decor, amazing amenities, and generous all-inclusive packages, it’s hard to top one of Grenada’s most luxurious hotels: Spice Island Beach Resort. It’s a sophisticated place, but remains unpretentious, making this a hotel where you can truly unwind. The beach also happens to be one of the prettiest on the island. 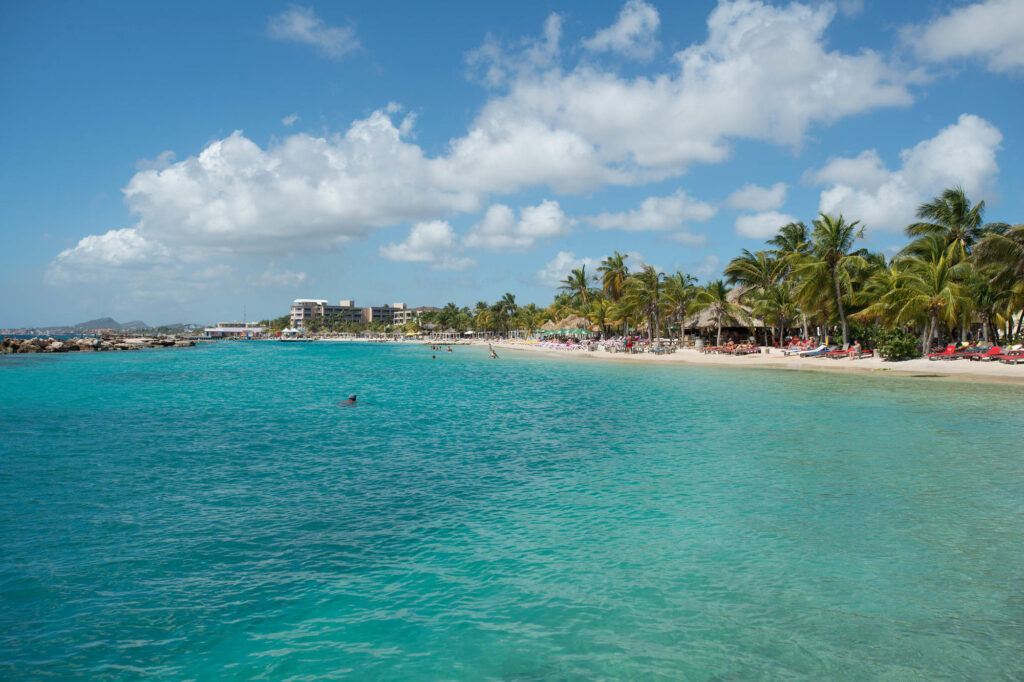 Aruba’s lesser known (and less crowded) cousin, Curacao is known for its year-round, near-perfect weather. Due to constant trade winds and warm waters, Curacao is a popular spot for windsurfing. Willemstad, its colorful capital, looks and feels like a Dutch city, with a bit of Caribbean flair. It has some of the prettiest beaches in this part of the Caribbean, tucked into small coves that feel readymade to be discovered. Curacao is also a major diving and snorkeling hub, as the waters off of its coast are home to a stunning array of reefs. 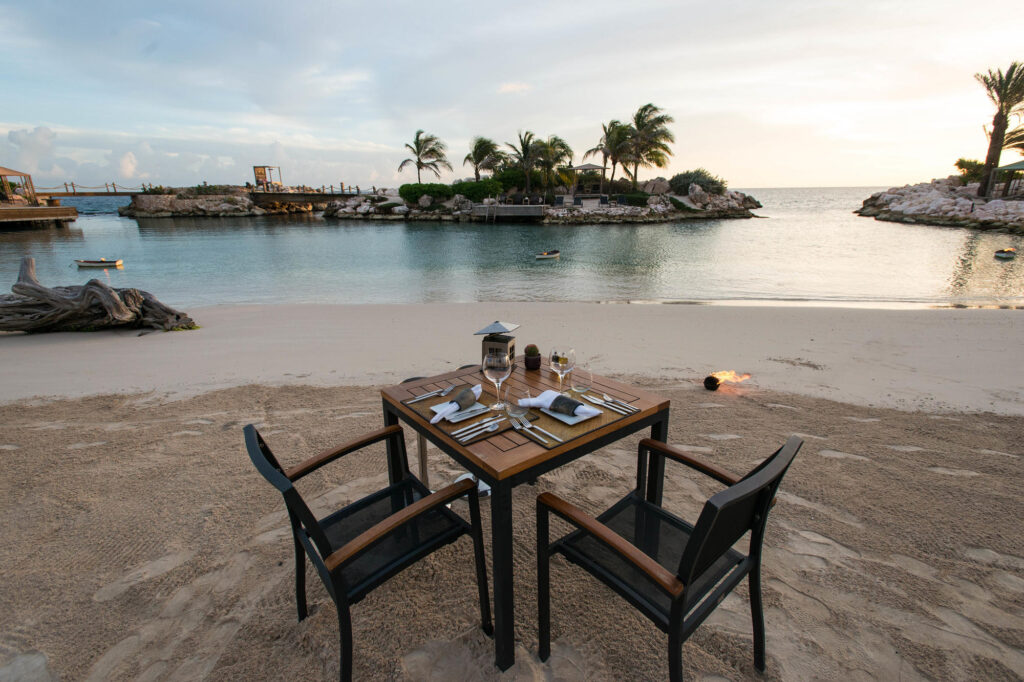 If you’re after secluded, intimate luxury, you’ve found it. With touches like welcome gift bags left on your bed and a blissfully uncrowded beach, Curacao’s Baoase Luxury Resort has a lot going for it. You’re not really within walking distance of anything here, but we think that’s all the more reason to explore the island’s offerings.

What to Bring On Your Caribbean Vacation