Stretching from the North Sea all the way up to the Arctic Circle, Norway is a dream destination for outdoor enthusiasts and trendy urbanites alike. Along the coast, more than 1,000 fjords plunge between jagged peaks, while red cottages and fishing villages dot narrow harbors. Meanwhile, cities like Bergen and Oslo wield cutting-edge design, art, and cuisine. Much of Norway’s 5.3 million people are concentrated in its cities and large towns, meaning that there’s plenty of wilderness and deserted shoreline to discover in solitude. Fortunately, affordable flights with Norwegian Air and immaculate roads and tunnels connect all corners of the country. With that in mind, read on for the best places to visit in Norway. 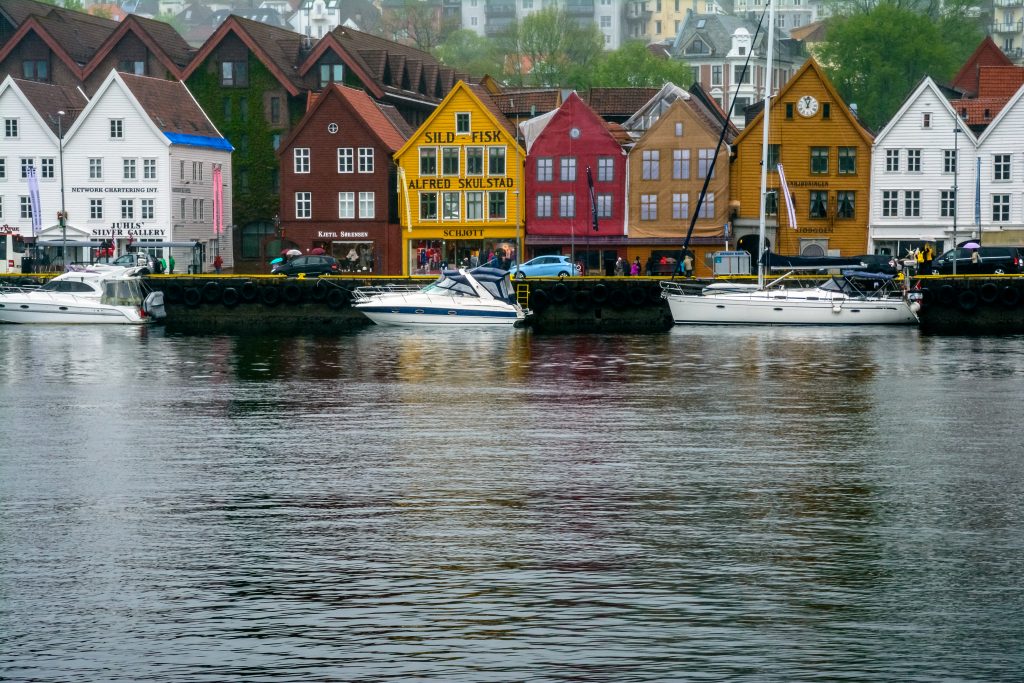 Encircled by mountains and serene fjords, Bergen’s natural beauty is reason enough to visit. However, its charming clapboard homes, world-class art museums, and buzzing restaurant scene make it worthy of a lengthier stay. Bergen’s port has been a commercial hub for centuries, demonstrated by impeccably quaint Bryggen. The UNESCO World Heritage site’s bright harbor-front buildings were utilized by fishermen and ship captains for centuries. A stroll through the narrow passages offers proof that Bryggen retains its 18th-century character, but galleries and cafés have taken the place of the fishing industry here. Across the harbor from Bryggen, Bergen’s chicly designed fish market flaunts fresh seafood, such as salted cod, smoked salmon, and oysters. Cruises to the neighboring fjords depart from here as well. The journey to Osterfjord passes by several waterfalls and through the Mostraumen strait, while Hardangerfjord is home to the famous Trolltunga hike.

Venturing away from the harbor quickly transports visitors into local neighborhoods and alleyways winding up the hillside. Cozy coffee shops, boutiques, and bars are abundant, which comes in handy during Bergen’s 300 or so days of rainy weather. During an all but inevitable rain shower, check out the Edvard Munch collection and rotating modern exhibitions at the KODE museum. On a clear day, Mount Fløyen grants some of the best views over Bergen. However, the queue for the funicular can become painstakingly long, especially when cruise ships dock for the day. Instead, get the blood pumping and take the stone stairs up Stoltzekleiven. At the summit, you’ll be rewarded with sweeping views of the city and harbor, as well as a refreshing drink from the Storavatnet reservoir. From here, follow the well-marked and relatively flat trail to Fløyen, where you can enjoy the views before returning to sea level on the funicular. 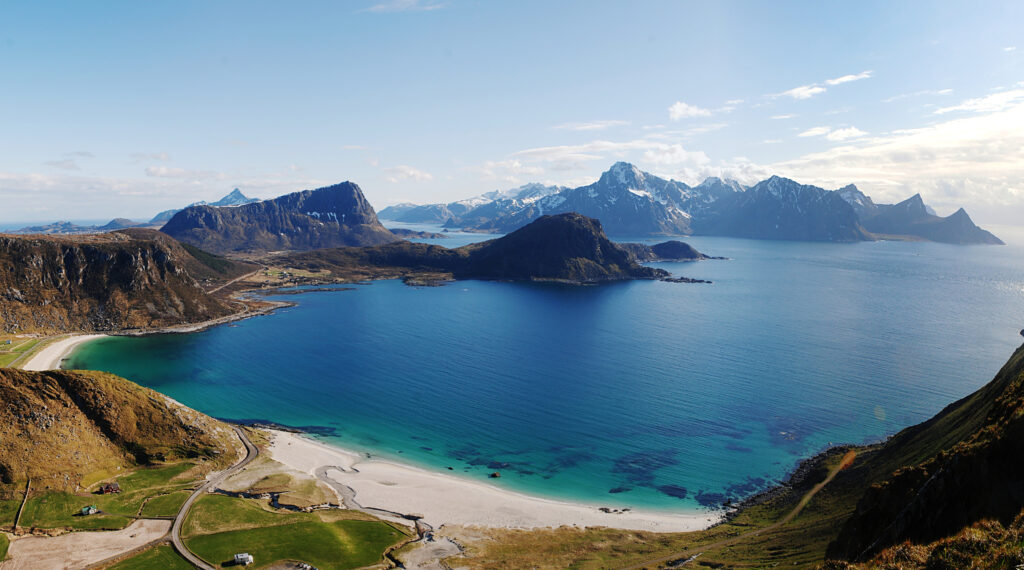 Situated in the Arctic Circle off Norway’s northwestern coast, this seven-island archipelago possesses some of the most dramatically beautiful landscapes in the country. The midnight sun lasts through June and July, while September through April is the best time to see the Northern Lights. Fortunately, exploring the rugged terrain is feasible due to excellent roads, bridges, and tunnels that connect the islands of Austvågøy, Vestvågøy, Flakstadøy and Moskenesøy, across Vestfjorden. The main road, E-10, traces the coast past sheep pastures and adorable cottages all the way to the picturesque village of Å. Meanwhile, plentiful hiking trails lead across the shoreline and up the craggy peaks. Kayaking or RIB boat tours provide the best chances to spot wildlife, such as puffins, orcas, and white-tailed eagles while admiring the jaw-dropping scenery. Though Lofoten is hands-down an outdoorsy destination, the Lofotr Viking Museum, Glasshytta glass-blowing gallery, and nautically-oriented Norsk Fiskeværsmuseum are all worthwhile pit stops. Daily flights from Bødo and Oslo arrive in Lofoten’s Svolvær Airport on Austvågøy. 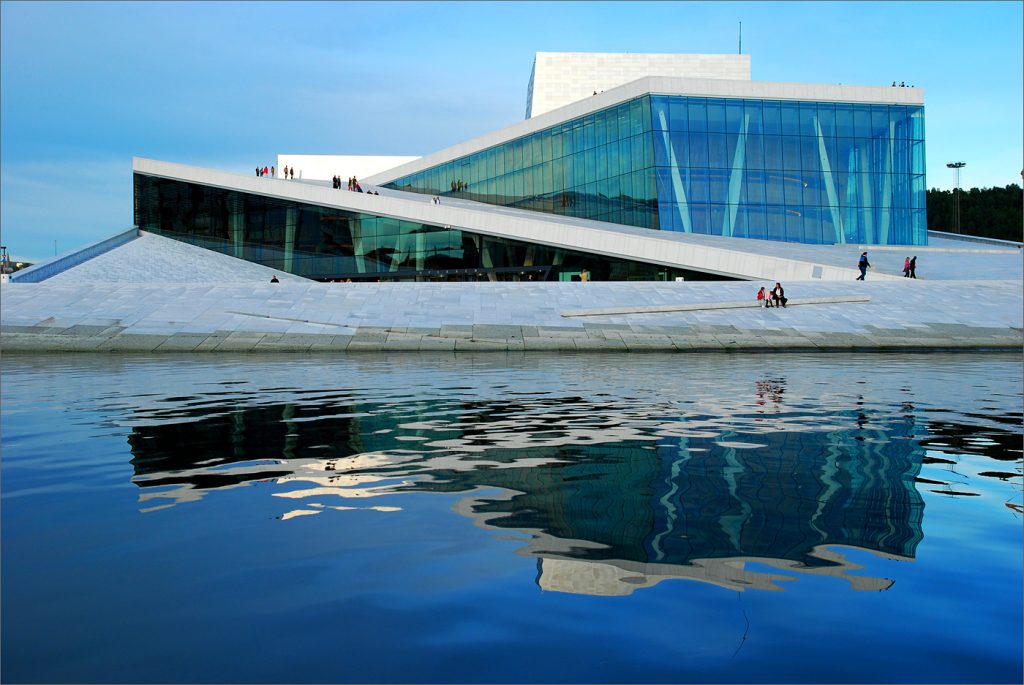 Often overlooked for other Scandinavian capitals or Norway’s extraordinary fjords, Oslo is an incredibly livable city with plenty to offer. For starters, the Norwegian capital earned the title of European Green Capital 2019, due to its impressively low carbon footprint, excellent public transport, and accessible green space. Just offshore, beaches and trails on Oslo’s islands can be reached in a matter of minutes via public ferries. Meanwhile, the winter months see ice-skating in the city’s parks and ski jumping at the Holmenkollen Ski Jump, where you’ll also find Norway’s Ski Museum and superb views over the city.

Aside from its natural allure, Oslo boasts a wealth of cultural gems, especially within its art and culinary scenes. Works by Norway’s most famous artist, Edvard Munch, can be seen at the National Gallery and the Munch Museum. For more contemporary masterpieces, the free waterfront display at Tjuvholmen Sculpture Park is a must-see, as is the fiercely modern Astrup Fearnley Museum of Modern Art. The city’s Opera House is a work of art in and of itself. The structure’s glorious marble roof, which can be accessed publicly, slopes down to the water’s edge, serving as a popular congregation spot to admire the Oslofjord and harbor. Keep an eye on the opera’s event calendar, which often hosts outdoor concerts during the summer months. For hip coffees shops, cafés, and nightlife, look no further than the Grünerløkka district. One of the neighborhood’s hidden gems, Blå, is housed in a graffiti-strewn factory-style building that’s open around the clock. Blå has something for everyone; Sunday hosts a vintage flea market, while jazz and rock groups play in the evening, followed by late-night DJ dance parties.

Consider taking the comfy Bergen-Oslo Railway to combine a visit to Norway’s biggest cities with extraordinary valleys and mountain peaks. After all, it took nearly 40 years of construction and engineering ingenuity to complete the route across the unforgiving terrain.

Our Oslo Hotel Pick: The Thief

Pricing for THE THIEF 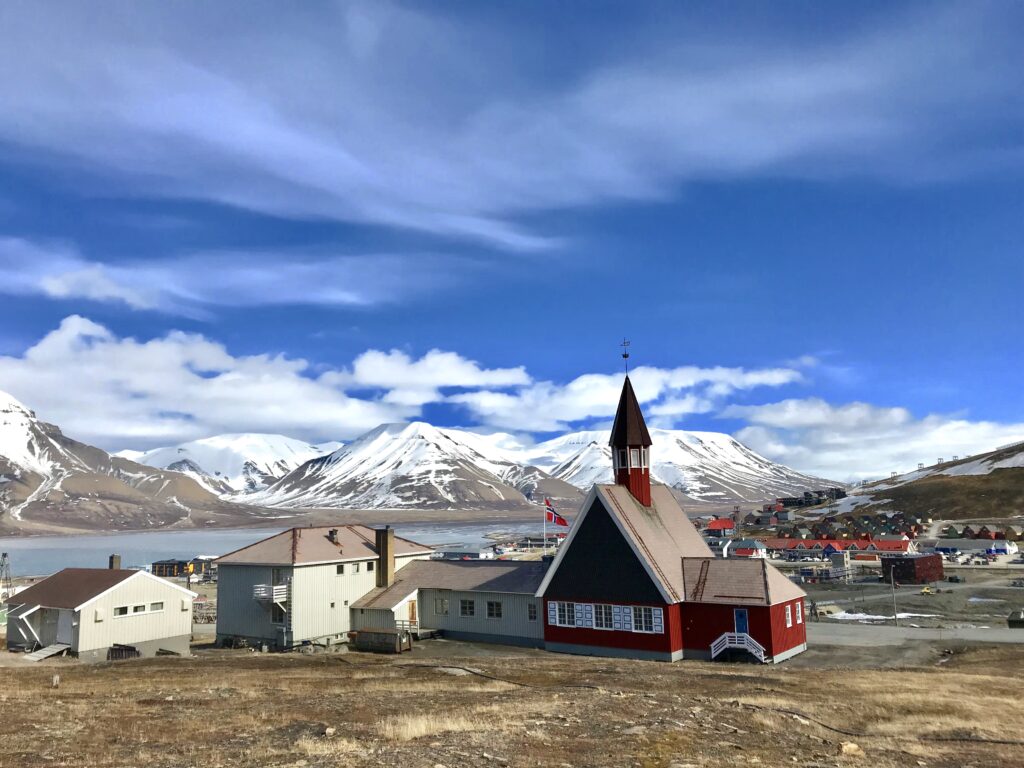 Located half-way between continental Norway and the North Pole, the Svalbard archipelago feels like the edge of the world amongst its dramatic icebergs and glaciers. Native species, like walruses and polar bears, easily outnumber the modest human inhabitance of roughly 2,700. It is the northernmost permanently habited place on earth, but the Gulf Stream makes it more temperate than comparable latitudes elsewhere, especially during the summer. In fact, the midnight sun lasts a whopping four months during the summer, making this the ideal time to explore the remote wilderness. There are a range of expeditions out of Longyearbyen, Svalbard’s largest town, including dogsledding, snowmobiling, ice climbing, and glacier trekking. Given Svalbard’s remote, harsh terrain and fierce fauna, it’s advisable to join a professional tour. Other unique experiences include touring the iceberg-filled bays to spot whales, walruses, and puffins, as well as trekking out to the Russian outposts of Pyramiden and Barentsburg. The Soviet-era structures and busts of Lenin offer a one-of-a-kind time warp – not to mention the contrast between the coal mining wasteland and pristine surrounding landscapes. Reaching Svalbard from mainland Norway is fairly inexpensive, but its distance increases the overall cost of living. Flights depart from Oslo and Tromsø, which takes three and one-and-a-half hours hours, respectively. 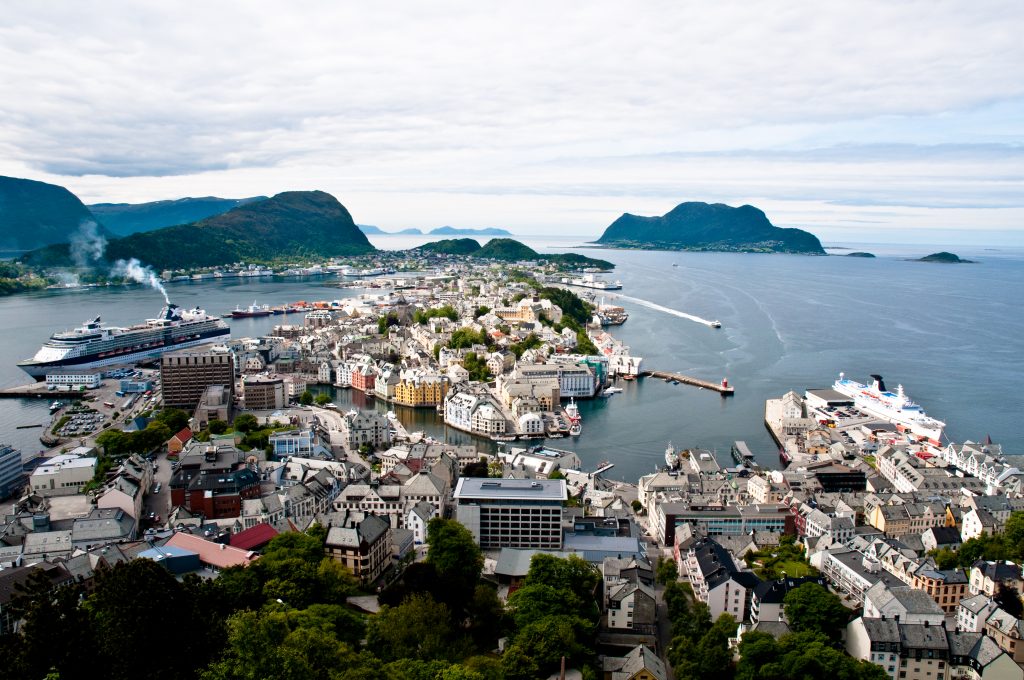 Situated on a series of islands extending out into the Atlantic and surrounded by mountains and fjords, Ålesund’s waterfront location is incredibly striking. Further beauty is added by the city’s Art Nouveau center, which could be easily mistaken for Prague were it not for the distinctly Norwegian landscape and plethora of seafood. Following a devastating fire in 1904, Ålesund was rebuilt with vibrantly colored Art Nouveau buildings. After admiring the architecture from street level, make the quick hike up to Fjellstua for a clear view over the city and surrounding archipelago. Though the city center can be easily seen in a day, Ålesund is an ideal base to venture out to the surrounding fjords and mountains. If you only have time for one excursion, take a boat cruise up the Hjørundfjord to admire the Sunnmøre Alps. 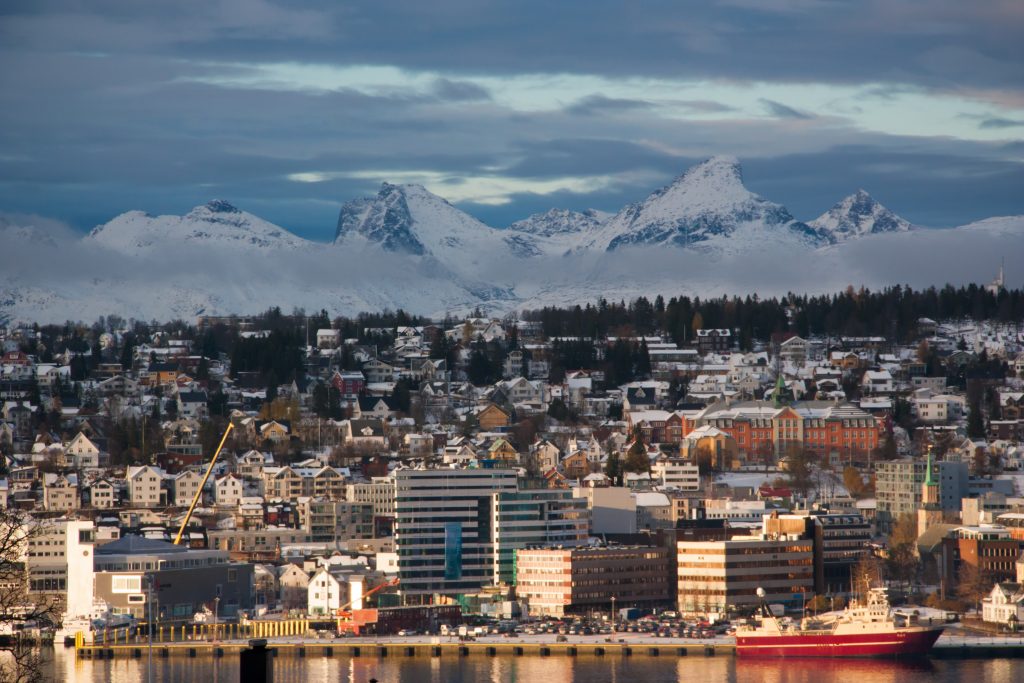 Another northerly locale, Tromsø is the gateway to mainland Norway’s arctic wilderness at 69 degrees north. Although many of the surrounding mountains remain snowcapped throughout the year, Tromsø is fairly temperate at sea level. Thus, the city is well-suited for seeing the Northern Lights during the long, dark winter months. For some of the best views, cross the eastern bridge to take the Fjellheisen cable car or hike up to the viewpoint on Storsteinen mountain. During the summer, trails are accessible from here to neighboring peaks, such as the 4,000-foot Tromsdalstinden. The neighboring mountains are well-suited for casual hikers, while more advanced trekkers should head to the Lyngen Alps. In the vicinity of the Fjellheisen’s lower station stands the Arctic Cathedral, which serves as the de facto symbol for Tromsø. The soaring, white church resembles an iceberg and features massive stained-glass imagery. Back in town, the Tromsø Museum and Polar Museum highlight indigenous Sami culture and arctic expeditions, respectively. As the northernmost university town in the world, Tromsø’s nightlife and café culture is exceptional for a city of its size. Skansen Kafé, housed in Tromsø’s oldest home, is a perfect spot to refuel on local delicacies and coffee, while Ølhallen beer hall is ideal for unwinding after a long day with a pint of local Mack beer. 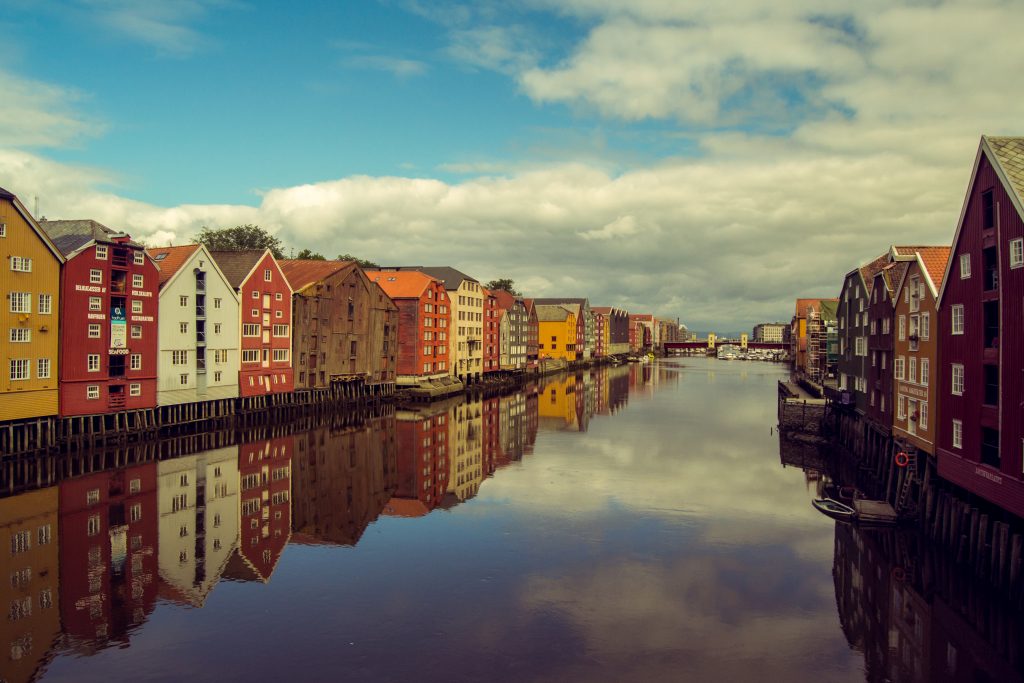 Norway’s third-largest city still flies under the radar among other Scandinavian metropolises. However, visitors who make the trek to this central Norwegian locale will find a picturesque city set on a magnificent fjord. Nearly encircled by the Nidelva River, Trondheim’s Old Town boasts a variety of historic attractions. The massive Nidaros Cathedral is the largest in Scandinavia, while the neighboring 12th-century Archbishop’s Palace holds Norway’s crown jewels. Nearby, the elegant Stiftsgården reigns as Scandinavia’s largest wooden palace and serves as the Norwegian monarchy’s royal residence.

Heading across the adorable, planked Gamle Bybro bridge leads to the imposing Kristiansten Fortress, where you’ll find the best bird’s-eye view of the city, as well as Trondheim’s bohemian neighborhood, Bakklandet. The riverside wharfs and bright-colored timber warehouses have been transformed into lively cafés, bars, and shops. Other highlights include Munkholmen Island and its fortress, which has also served as a prison and monastery, as well as Norway’s national museum of popular music, Rockheim, where you can mix your own hip-hop track.