Located off the North African coast, Spain's Canary Islands have been a popular getaway for European (mainly British) travelers since the 1960s. As such, there are all sorts of hotels here, from simple budget digs to ultra-chic resorts, as well as a few hotels that strike a perfect balance between modern elegance and traditional charm. Here are our picks for the 12 most beautiful resorts in the Canary Islands. 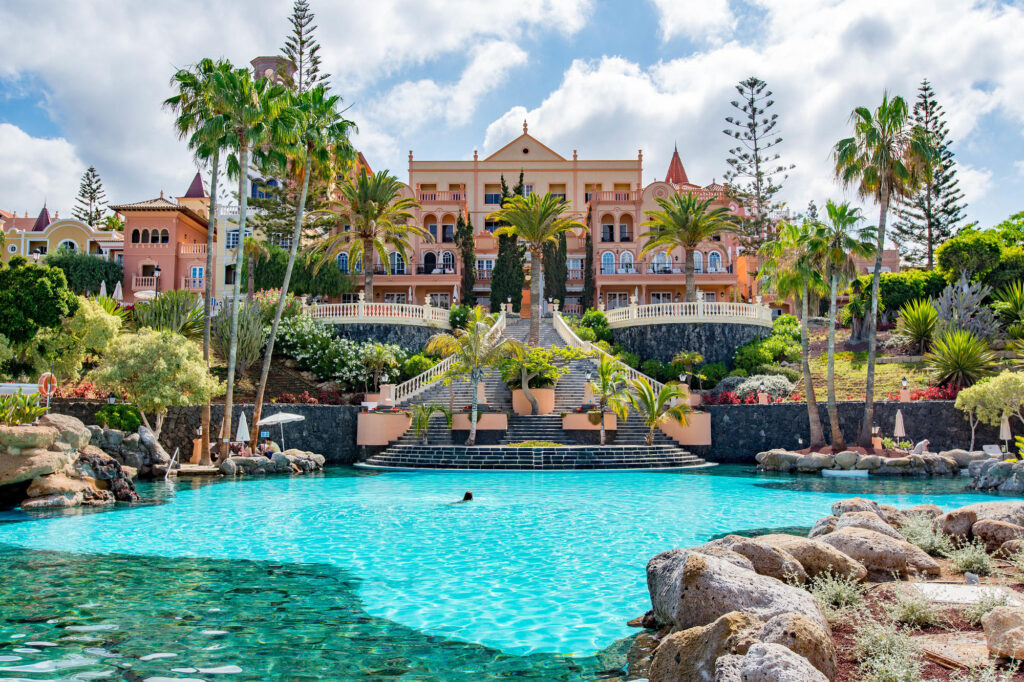 The Beach Pool at the Bahia del Duque/Oyster

Set on Playa del Duque, one of the better beaches in Costa Adeje, this huge resort is spread across a series of neocolonial buildings that feature a mix of pastel and off-white arches, terra-cotta and wrought-iron decorative features, and a ton of greenery — both in the grand, atrium-topped lobby and across the sprawling grounds. The property feels very much like an old village, with Spanish Baroque-inspired gardens and beautiful lawns and fountains, plus a sprawling lagoon pool with views over the sea. 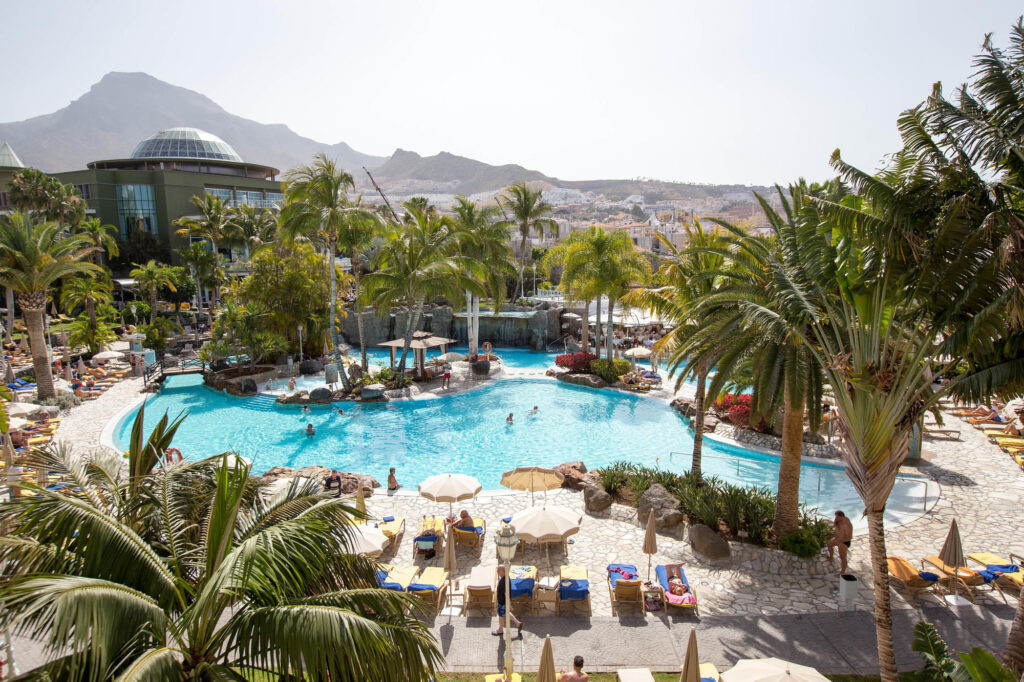 Known for its striking Art Deco style, Jardines de Nivaria is a 271-room luxury hotel that’s popular with couples and families. Despite the property’s large size (expect two pools, three restaurants, four bars, and an array of on-site amenities), the grounds are mostly serene and lush, with a variety of tropical plants, small artificial waterfalls, bridges, and winding paths. Charming wrought-iron and stone gazebos dot the gardens, adding to the romantic, intimate feel. Meanwhile, rooms have elegant decor and balconies or terraces. The location across the boardwalk from a sandy beach doesn’t hurt either. 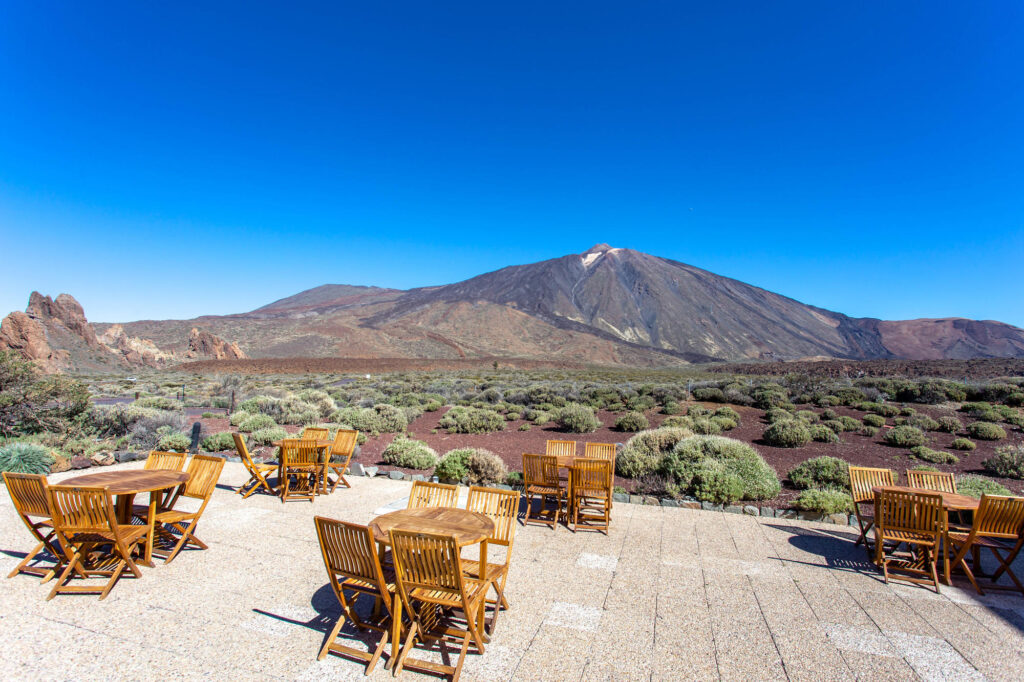 Located in a volcanic crater in Teide National Park, this luxury hotel boasts hard-to-beat views of Mount Teide and Mount Guajara. The building itself, more than 6,000 feet above sea level, is designed to blend in with its surroundings. There’s even a telescope for guests, and a weekly guided stargazing session to take it all in at night. 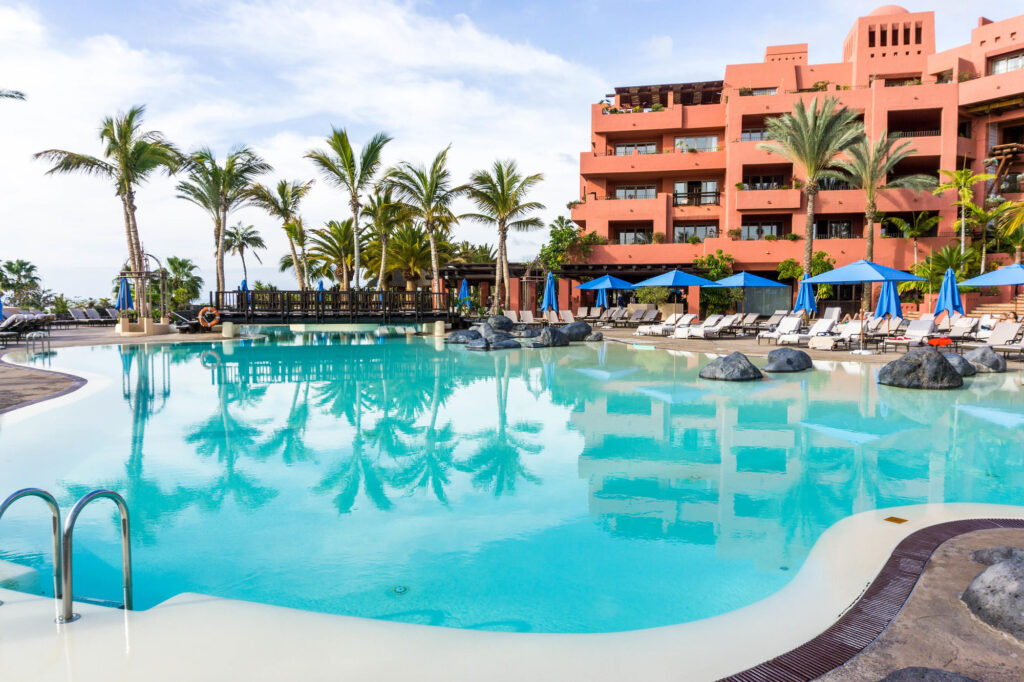 The Pool at The Ritz-Carlton, Abama/Oyster

Set on the side of a volcano overlooking the Atlantic Ocean, The Ritz-Carlton, Abama is a large coastal resort with luxurious interiors and exteriors. Guests are welcomed with a palm-tree lined entrance leading into a grand lobby with marble flooring, over-the-top flower arrangements and plants, and an open-plan layout. Outside areas feature lush gardens with ponds, palm trees, and green lawns throughout. Guests can access an exclusive beach via a funicular, though there are seven swimming pools, a spa, fitness center, 18-hole golf course, seven tennis courts, and 10 restaurants to keep folks occupied on-site. To top it off, the 461 rooms have elegant Spanish decor and large balconies.

Pricing for The Ritz-Carlton, Abama 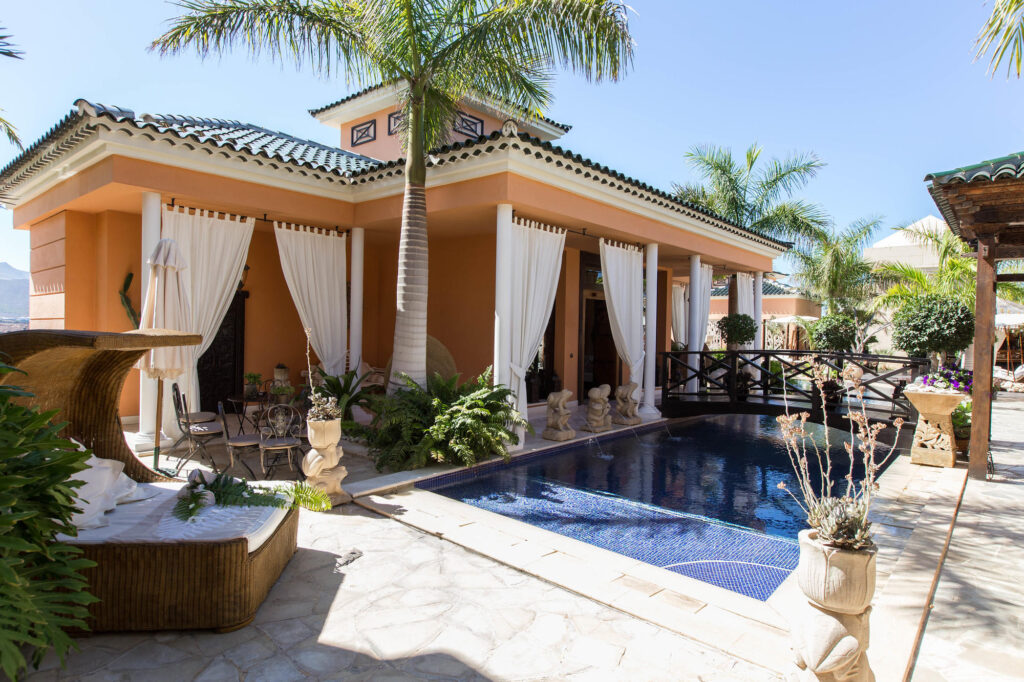 The Pool at the Royal Garden Villas/Oyster

Set against the backdrop of mountains, this luxury boutique resort has a design scheme that’s more evocative of Southeast Asia than the Canary Islands. Because of its hillside location, guests can expect incredible views. The features here are downright gorgeous, from the Golden Pond Spa (with its repurposed entrance brought from a Thai temple, its intricately carved marble columns, and its deep-teal hydrotherapy pools) to the romantic Jardin restaurant (featuring hand-carved Javanese screens). 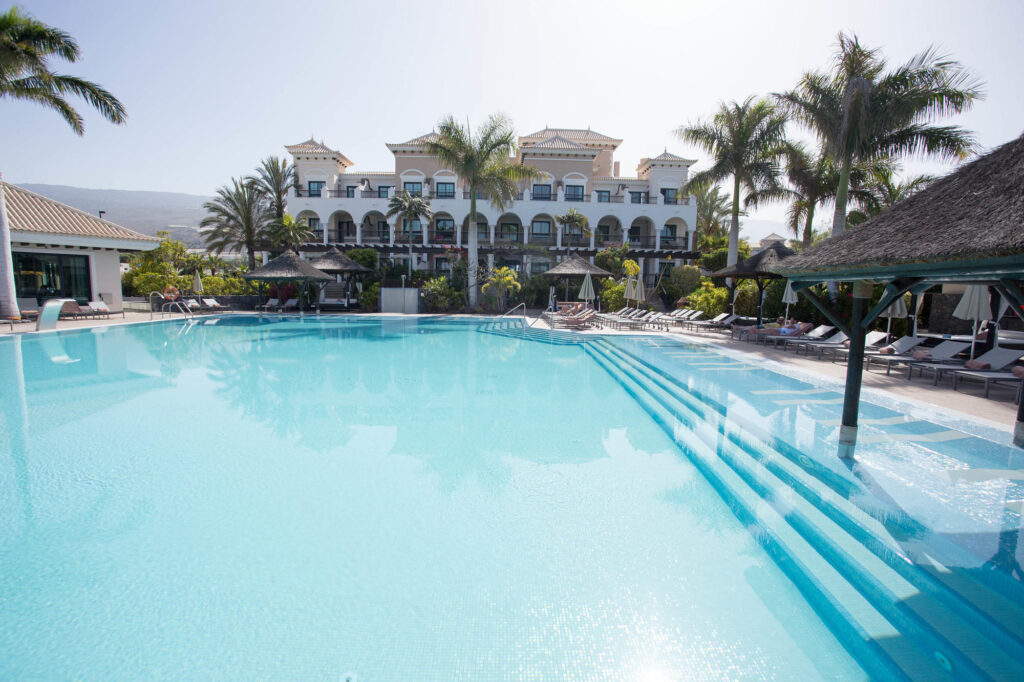 This palatial resort is among the most luxurious — and beautiful — properties on Tenerife. At its heart sits a central terrace area with a series of palm-flanked fountains that are colorfully illuminated at night (they even do choreographed fountain shows). The rest of the grounds are covered with manicured grassy areas and lounge chairs that overlook the sea. There’s also a gargantuan saltwater infinity pool, spanning nearly the entire length of the property, and it looks particularly fantastic around sunset. 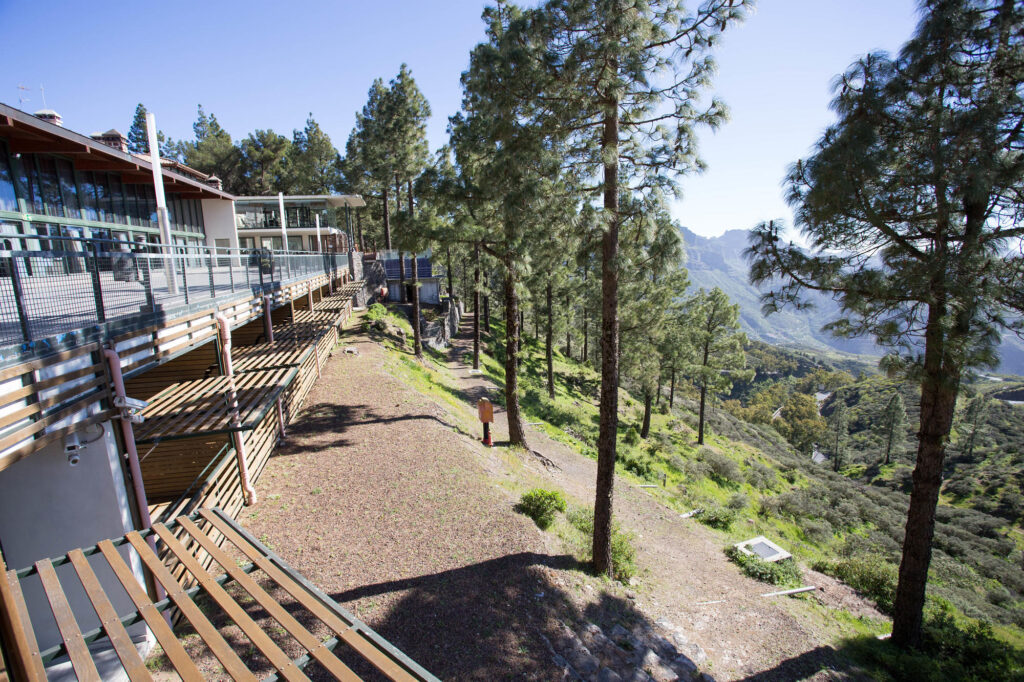 Tucked away in a remote, mountainous area of Gran Canaria, the Hotel Parador de Cruz de Tejeda offers a quiet, tranquil, and undeniably scenic alternative to the large mega-resorts that dominate the coastal areas of the island. The common areas feature arched ceilings and heavy wood furniture, but the aesthetic is more cozy than pretty. In fact, it’s the scenery — not the common areas — that really make this boutique property stand out, with pine forests and sheer drops as far as the eye can see. There’s also a gorgeous pool that juts out into the woods, as if suspended among the trees. 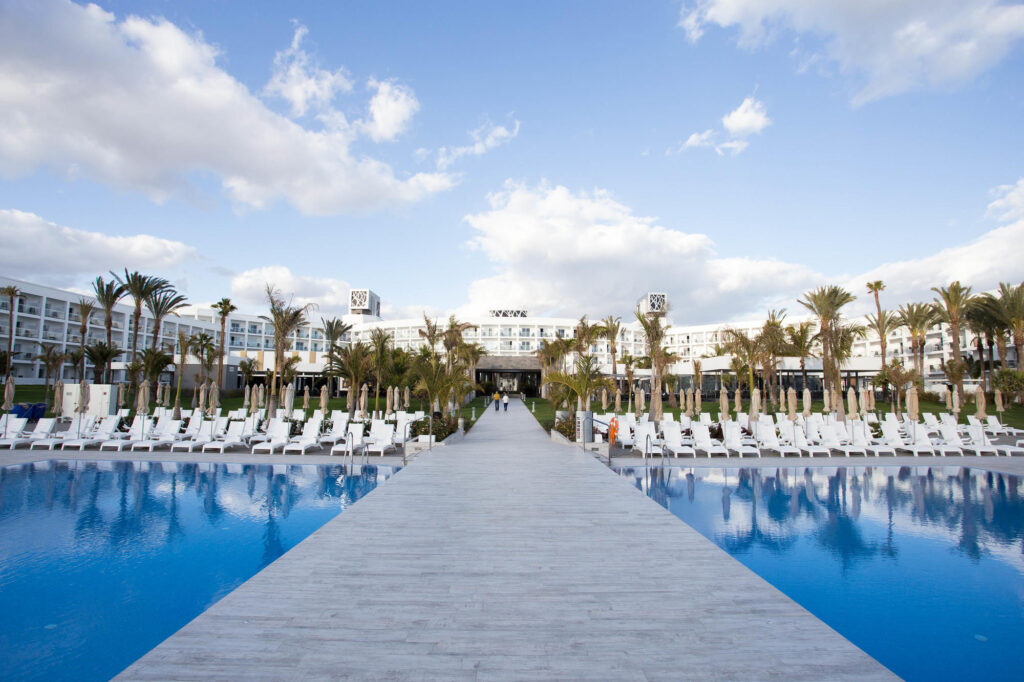 This oh-so-pretty luxury resort on Gran Canaria puts a contemporary spin on traditional Canary Island aesthetics, with clean lines and subdued gray and mauve accents that look strikingly chic against bright-white backdrops. The Art Deco lobby features polished black floors and a crystal chandelier, while the grounds have a sleek, but not sterile, blend of white and gray buildings, softened by the presence of grassy lawns and natural palms. 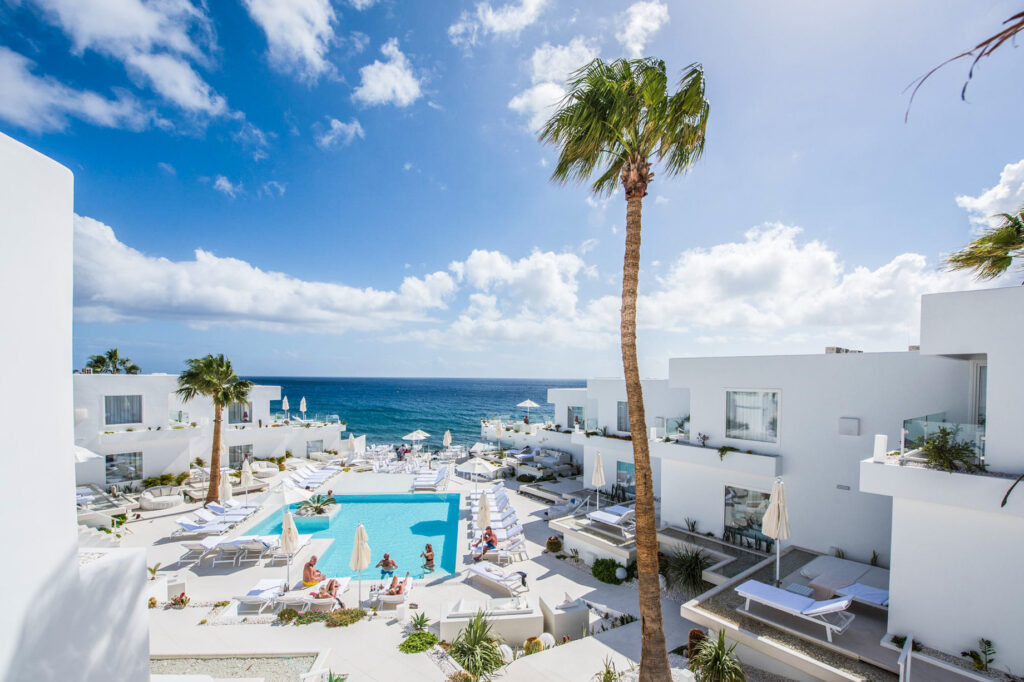 The Suite at the Lani’s Suites de Luxe/Oyster

Located on the northeastern island of Lanzarote, Lani’s Suites Deluxe toes the line between sleek modernism and Goth boudoir, resulting in a look that’s refreshingly distinct from your average Canary Islands resort. It sits in an architectural complex designed by an esteemed Canarian artist, and there’s a ton of attention to detail in both rooms and common spaces. The grounds are particularly attractive, with paper-white exteriors energized with tropical foliage and cacti. In the lobby, crystal chandeliers and dark accents add a bit of sexy allure. This is also mimicked in the rooms, which also have an all-white color scheme boldly contrasted with deep reds and blacks. Views overlooking the sea — from the rooms and many common spaces — are a delightful bonus. 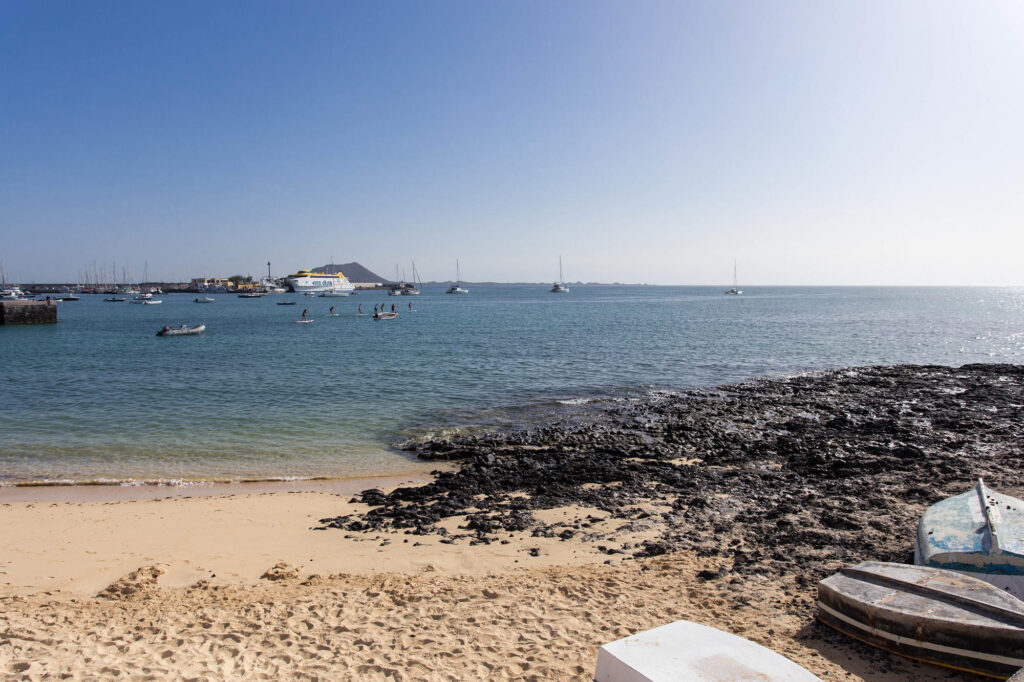 Beach at the Avanti Hotel Boutique/Oyster

With a blue-and-white color scheme, this intimate boutique hotel on Fuerteventura is reminiscent of something you might find on the Greek island of Santorini. The lobby here is gorgeous, with Moroccan lanterns, beaded curtains, and a huge piece of modern art in blue mottled hues. The rooms follow a similar aesthetic and come with whitewashed balconies that overlook a stretch of golden sand and the blue sea beyond. 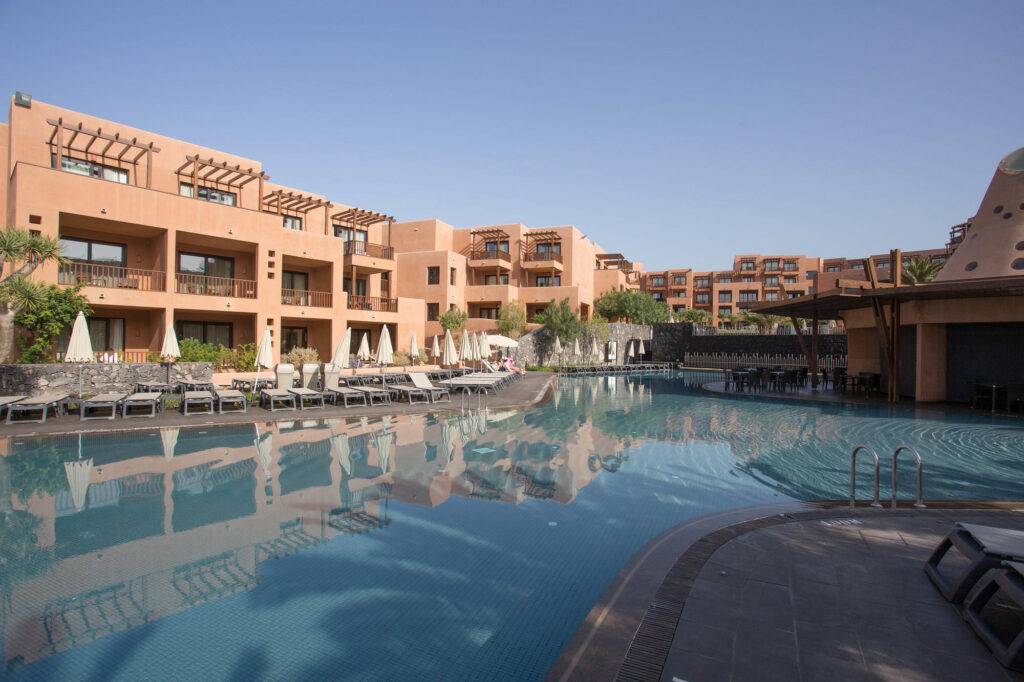 Spread out over a rugged stretch of land not far from the airport, Sandos San Blas Nature Resort & Golf isn’t the most luxurious property on this list, but it is one of the most true to its surroundings. Rooms are housed in a series of terra-cotta buildings that wrap around a central courtyard filled with pools and lounge chairs, and there’s a tunnel shortcut that resembles a subterranean cave that can come in handy on rare rainy days. It’s set right across from a nature reserve that’s run by the same company as the hotel, and tours of the sprawling area are available at a discount for hotel guests. 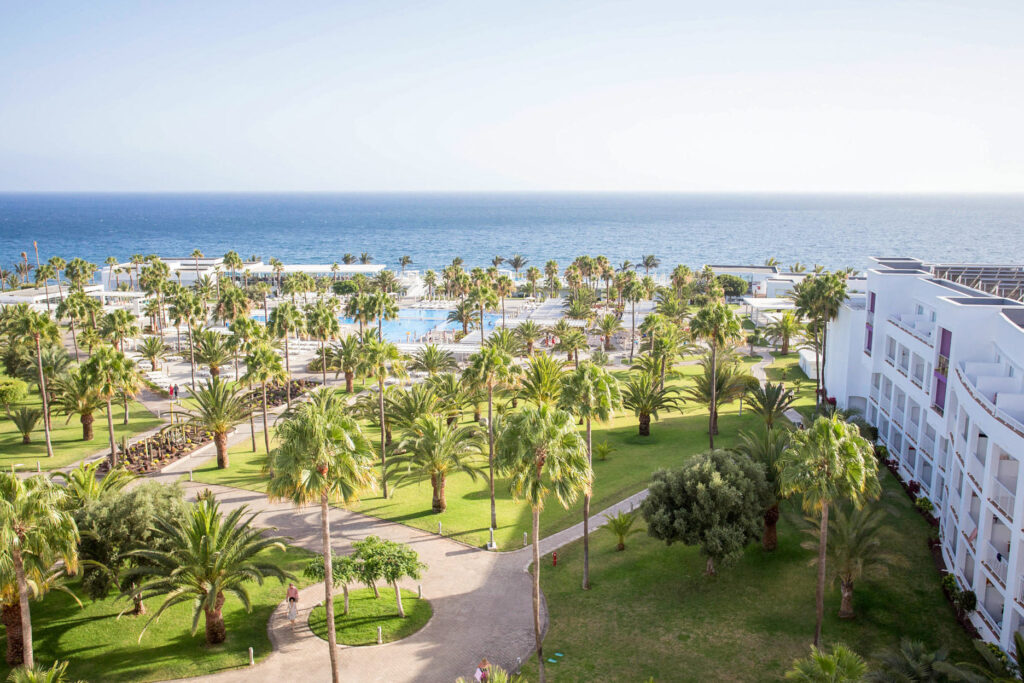 If you prefer a modern, minimalist style over Old-World architecture, the Hotel Riu Gran Canaria will likely be right up your alley. This laid-back all-inclusive resort features a sleek, stylish aesthetic, both in rooms and common areas, with neutral decor brought to life with Pop Art elements. Common areas are clean, featuring mid-century modern-inspired furnishings and lots of colorful, but muted, geometric accents. The facade is white with purple accents, and the grounds are home to grassy lawns with palm trees. There’s also a rugged, rocky beach that’s photogenic, but not really swimmable.