Take a look at the best value hotels in Disney World. 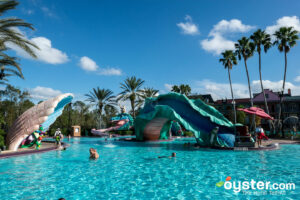 Strolling around Disney’s Port Orleans French Quarter, it’s easy to forget you’re in central Florida. Pastel hued buildings with wrought-iron lattice work line the brick-paved walkways of this 1,008-room upper-middle-range property, where manicured gardens and trickling fountains evoke the breezy atmosphere of New Orleans. In true Disney fashion, the theme is meticulously carried out across the property. The pool alludes to the mystical quality of the Louisiana bayou with a giant sea serpent that criss-crosses the water, while the quick-service restaurant serves jambalaya, po’boys, and etouffee. Steamboat style water taxis can transport guests to Disney Springs and the neighboring Port Orleans Riverside. Another one of Disney’s Moderate Resort Hotels, Riverside can be a good alternative with similar rooms, but it offers more amenities, like multiple pools, a full-service restaurant, and a pet-friendly policy. 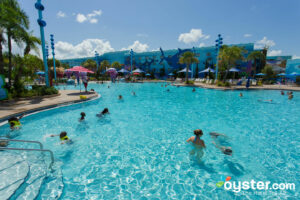 Opened in 2012, the mid-range Disney’s Art of Animation Resort is situated in the Disney Resort complex and features fun, colorful decor inspired by four beloved Disney and Pixar movies -- Cars, The Lion King, Finding Nemo, and the Little Mermaid. Each of the four wings of the property represent one of the movies, and guest rooms are decked out in Disney paraphernalia. The standard (Little Mermaid wing) rooms are small, but include mini-fridges and coffeemakers, while the rest are spacious suites with kitchenettes and two bathrooms. The hotel has three pools, a huge game room, and a nice food court with plenty of choices, plus it offers free shuttles to Disney parks and the airport. Budget-conscious families should find the convenient location and reasonable rates attractive, but the nearby, lower-middle-range Disney’s Pop Century Resort typically has even lower rates -- though rooms are small and tired.

A non-Disney time-share resort on the Disney World property with enormous one- and two-bedroom condos, five elaborate pools, free Internet and parking, and a quieter, relaxed atmosphere just five minutes from Epcot makes the Wyndham Bonnet Creek Resort a good alternative for those who want a respite from Disney's pervasive theme-driven atmosphere. Service can be middling at this upper-mid-range property and lines can get long, but with several on-site restaurants and activities for little ones, some families have reported skipping a day at Disney in favor of the lazy river and pizza here. 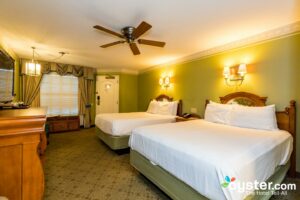 Designed like an old town on the Mississippi Delta, the huge, 2,048-room Riverside is one of Disney's best Moderate-category hotels. Its guest rooms aren't as new as those at Coronado, but its more central location, fun pool complex, large rooms that sleep five, and beautiful (even romantic) setting makes it a great pick for the price. 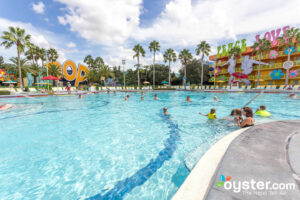 Disney's Pop Century Resort is an enormous, 2,880-room budget hotel that was built as an homage to 20th-century pop culture. The property is brimming with giant colorful installations, and three outdoor pools paying tribute to different decades. There are a big indoor arcade and a self-serve food court, but few other facilities. The small rooms have mini-fridges and flat-screen TVs, but the worn furnishings and lack of coffeemakers are a letdown. It's still worth considering this resort as a value option given its convenient location near Epcot and free shuttle access to the theme parks, but budget travelers should note that the mediocre self-serve cafeteria has captive audience prices, much higher than similar cheap eats along International Drive. It's worth comparing rates at the nearby Disney's Art of Animation Resort, which has more amenities. 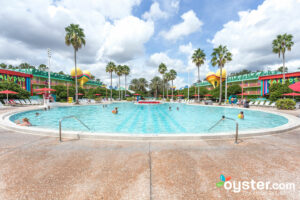 An affordable lower-middle-range option, Disney’s All-Star Music Resort is one of three All-Star themed resorts at the southern end of the Disney complex. The disney-going families that stay here are willing to tolerate longer shuttle rides and (some) small rooms for cheaper rates. There are food court dining, a guitar-shaped pool, and free shuttles to the parks and Orlando's airport. Its 1,604 guest rooms are generally clean and well maintained and come with mini-fridges (and microwaves in some). Family Suites sleep up to six people. For another affordable option, travelers could consider Disney's Pop Century Resort, which is even closer to the parks. 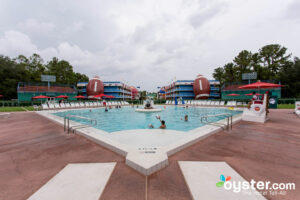 The 1,920-room Disney's All-Star Sports Resort is one of three themed Disney budget properties within the resort. It offers the convenience of being within the park, though rooms are basic, dated, and lack many frills. Perks include free bus service and expanded park hours. The kid-ready sports theme carries throughout the hotel, with oversized balls, bats, helmets, and rackets all over. One of the outdoor pools is shaped like a baseball diamond, and the other features huge surfboards. Indoor and outdoor games keep guests entertained, and food court dining is child friendly. For the adults, there's a bar by the pool. Budget-conscious travelers who aren't into sports could check out the other two Disney budget properties, the All-Star Movie Resort or the All-Star Music Resort. 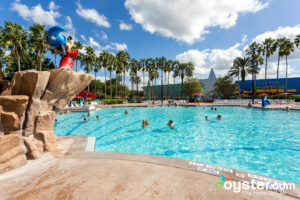 One of Disney's least expensive resorts, the 1,920-room All-Star Movies Resort is one of three adjacent, virtually identical All Star properties. Small, worn rooms, scarce food options, two fairly ordinary pools, and Disney's standard set of free services -- not bad, for the price, but the similarly priced Pop Century has faster access to most of Disney's theme parks. 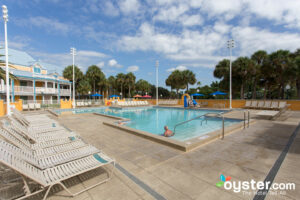 The mid-range Disney’s Caribbean Beach Resort is a massive complex with 2,112 rooms and six separate man-made islands surrounding a picturesque lake. It’s located near Epcot Center in the heart of Disney country, but unlike other family-oriented Disney resorts, it doesn’t have a Disney theme. Its Caribbean and pirate theme is still fun and festive, just more understated. Rooms are clean but small, with mini-fridges, safes, and coffeemakers. Highlights include free shuttles to the airport and Disney parks and seven outdoor pools, including a huge central pool with waterslides. Parking is free at each island and there’s an internal shuttle, but walks to various points around the resort can be lengthy. Rates are competitive with other Disney properties, but the lower-middle-range Disney’s All-Star Music Resort is a decent cheaper alternative.