In 2019, British outlet Daily Express published a piece about the Dominican Republic, with a headline that reads “Crimewave Grips Holiday Hotspot.” The article details an advisory from the U.K. Foreign Office, focusing on a spate of violent car robberies near the Las Americas airport in Santa Domingo. But if you read the report that the story is based on, you’ll find a more nuanced batch of advice from the Foreign Office.

The Dominican Republic, a gorgeous Caribbean country that shares an island with Haiti, has a reputation for being both a bargain and a bit dicey. Still, approximately 6.5 million tourists visited the D.R. in 2018, more than any other Caribbean nation, according to the Caribbean Tourism Organization, CNN reports. Of that number, 2.2 million tourists came from the U.S. Plenty of travelers think fears about the D.R. are overblown, while others say you must be street smart. Read on for more information about safety and security in the Dominican Republic.

Common Types of Crime in the Dominican Republic

Rather than perusing the national murder rate, most people choose their vacation destination by considering factors like attractions and amenities. However, it’s worth noting that between 2012 and 2017, the murder rate in the Dominican Republic decreased from 22.1 per 100,000 to 14.9. That being said, the D.R. made headlines in 2019 for the deaths of 11 American tourists. Autopsy reports found that all deaths were due to natural causes, but many still questioned whether they were linked or related to tainted alcohol. Three of the Americans died at the Grand Bahia Principe La Romana and two died at the Hard Rock Hotel & Casino in Punta Cana. And in January 2019, a woman was brutally attacked at the Majestic Elegance Punta Cana.

The U.S. State Department gives the Dominican Republic a Level 2 advisory, meaning travelers should exercise increased caution when visiting. This puts the country in the same safety category as destinations like Italy, Germany, and the United Kingdom. “Crime is a threat throughout the Dominican Republic, though tourist destinations are generally more heavily policed and safer than other metropolitan areas. Take precautions to avoid becoming a target,” the website states. Violent crime, including armed robbery, homicide, and sexual assault are all listed.

The most popular crime in the country is a drive-by robbery. This is when an assailant speeds up to the victim on a motorcycle, scooter, or even bicycle, grabs something valuable (like a purse or jewelry), and takes off. If the thief doesn’t succeed in nabbing something, he or she may get off the vehicle. A gun is often pulled. Authorities advise victims to remain calm and comply. A quarter of the country’s murders occur when a robbery goes bad. According to the U.S. State Department, the most common areas for robberies in the Dominican Republic are Santo Domingo City, Santo Domingo National District, San Cristóbal, La Altagracia, and La Vega. Chances are, whatever you have in your handbag or wallet isn’t worth your life. Purse-snatching and pickpockets are also problems that crop up at hotel bars and restaurants. While most watering holes are probably fine, the Dominican Republic is probably not the place to skimp on accommodations with questionable security.

A little common sense will help stop you from becoming a crime victim. Don’t wear flashy jewelry (even costume jewelry may get you unwanted attention). Avoid carrying an ostentatious purse. No need to be that oblivious tourist who walks down the main drag talking or live-streaming the sunset for friends back home on a brand-new cell phone. Also, take into account that most motorcycle robberies — at least in Santo Domingo — occur between 8 and 11 p.m., and the majority of those two-wheelers have two riders. So, keep your eyes peeled for any bikers rolling your way.

Dominique Lessard recently took a 10-day trip to the Dominican Republic with her family and kept a diary for her blog Easy Planet Travel. Did she ever feel unsafe? “Not at all,” says Lessard, who is now back home in Quebec. She regularly travels with her husband and daughter and takes several precautions to ensure they don’t run into problems. For starters, the family plans all of their activities during the daytime. When the sun goes down, they head back to the hotel.

That being said, other travelers have occasionally fallen prey to kidnapping. In one scenario, a tourist may be apprehended (sometimes by men in police uniforms) and taken to a hard-to-find location. The victim’s relatives are then contacted with big ransom demands. Sometimes this plot is referred to as the “Grandparents Scam” because the relative contacted is often elderly and well off enough to wire over a hefty ransom. Once the money is sent, the detainee is released.

ATM card fraud occurs often enough that you should try to only use cash-dispensing machines located inside banks. To avoid credit card scams and identity theft, some travelers only use cash, but given the country’s reputation for mugging, you probably don’t want to have too many bills on you at any particular time.

Prostitution in the Dominican Republic

Selling sexual favors isn’t outlawed in the Dominican Republic. However, related activities, such as pimping and setting up a brothel, are illegal. Still, these crimes typically aren’t prosecuted, and if you look in the appropriate areas, it won’t be difficult to find women and men plying the trade. Single men, in particular, are contacted most often with a sales pitch. If you want to avoid it entirely, you may want to skip places like Boca Chica on the south coast and Sosua in the north. Of course, there’s plenty more in these towns than the escort business.

Lessard’s first stop in the Dominican Republic was Boca Chica and she didn’t see any prostitutes during her family’s stay. “My husband and I were traveling with our five-year-old daughter, so maybe we weren’t the right audience,” says Lessard. On Easy Planet Travel, Lessard writes about how the white-sand beach and clear shallow water were great for the pint-sized traveler in her family.

Driving in the Dominican Republic

The roads in the Dominican Republic are known to be a backdrop for trouble. There are drive-by robberies and taxi scams, in which the driver winds up charging tourists much more than the local rate. Setting criminal behavior aside, the D.R.’s city streets can be packed with motorcycles and cars, rattling even the most experienced drivers.

Outside of the cites, though, many of the highways and country roads are well-kept. “I thought the roads were much better than the ones we have in Quebec,” notes Lessard. The tolls, she advises, can be steep, with some of the more popular routes costing more than $10 to motor through.

One hotel employee warned Lessard to be careful when driving because the locals occasionally steal manhole covers for the metal. Needless to say, if a wheel jams into one of those divots, the impact can ruin a car.

Natural Disasters in the Dominican Republic 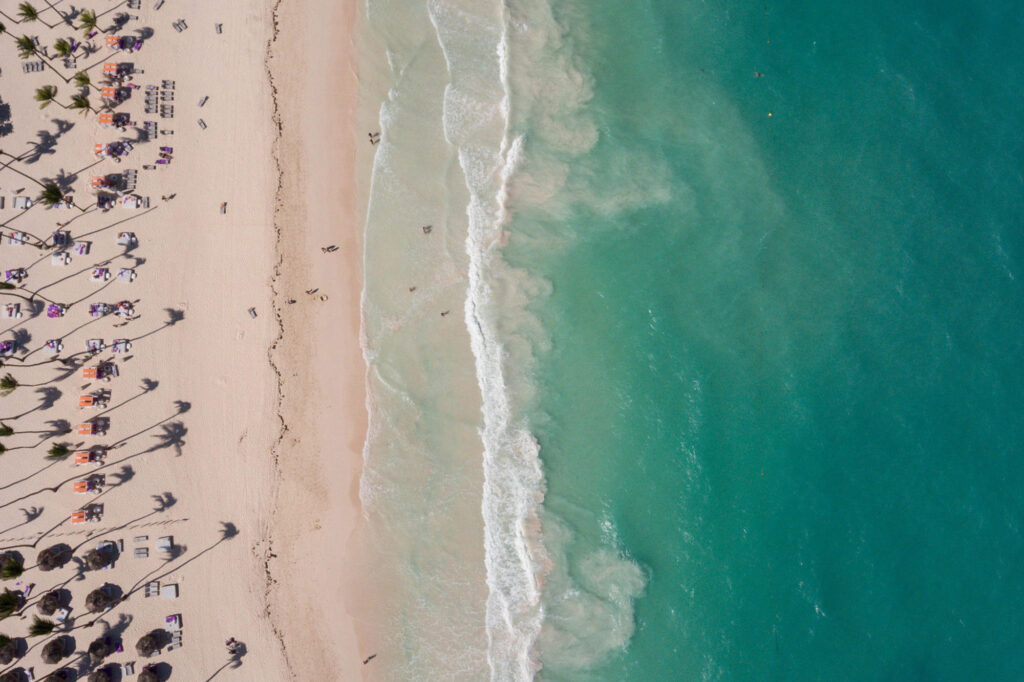 The beauty of the Dominican Republic comes with a risk for natural disasters, particularly hurricanes and earthquakes. Several of the Caribbean’s recent storms, including Maria, Irma, and Sandy, passed by without inflicting the major damage found in other parts of the region. The last huge hurricane to directly hit the island was George in 1998. However, there’s always a risk that another tropical storm can impact the island. Even hurricanes that don’t land on the Dominican Republic’s shore may impact flights and shipping in and out of the area.

Be mindful that hurricane season starts in June and ends in November, with the majority of storms occurring after July. If you’re traveling to the D.R. during this season, it might be wise to invest in travel insurance. On the plus side, prices for hotels and flights typically dip during these months.

As for earthquakes, a major one occurs every 50 years, on average. (The last was in 1946.) However, smaller ones (below a magnitude 7) happen more frequently. Be prepared for the possibility of the ground shaking, but it’s unlikely any tremors will leave lasting damage.

Choosing Hotels in the Dominican Republic 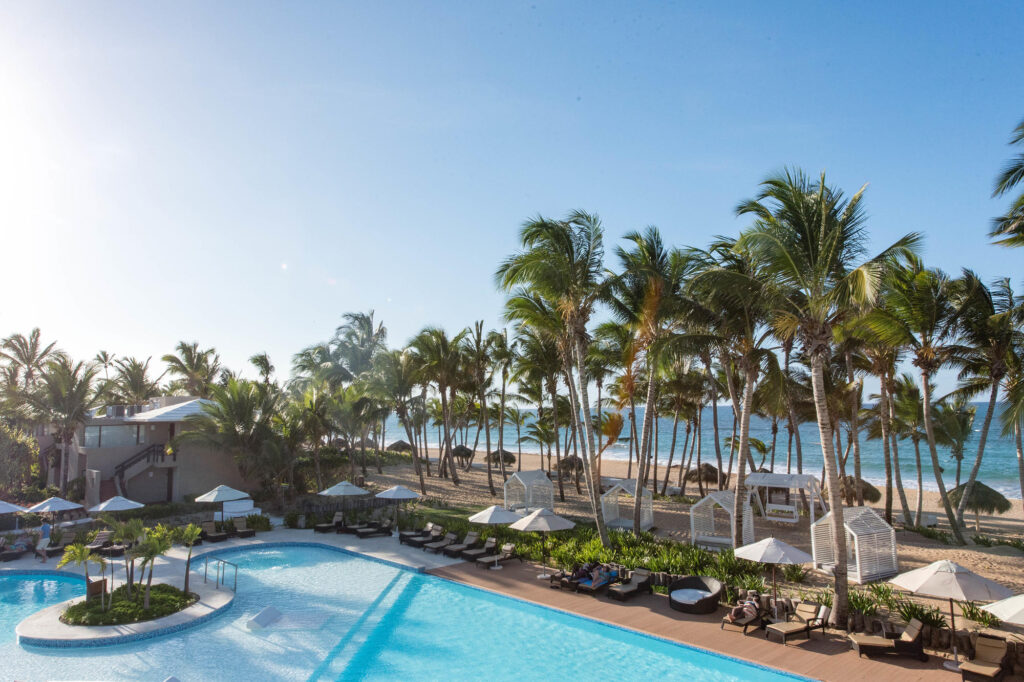 One way travelers to the Dominican Republic address their security concerns is by staying at an all-inclusive resort where only hotel guests are allowed on the grounds. The D.R. definitely has a lot them, including the Majestic Colonial Punta Cana (which is packed with everything from a casino and spa to swim-up bars, a beautiful white-sand beach, and plenty of activities for both families and adults), Luxury Bahia Principe Cayo Levantado in the Samana Province (where each room comes with a hot tub), and Zoetry Agua Punta Cana (which caters to couples with an uncrowded white-sand beach, sleek and spacious suites, a pristine pool, and one of the Dominican Republic’s top spas). Meanwhile, Sanctuary Cap Cana is an adults-only property filled with pretty much every perk you’d need on a Dominican Republic all-inclusive vacation. If you’re looking for a boutique experience in Punta Cana, check out Le Sivory Punta Cana by PortBlue, a quiet, adults-only all-inclusive property situated in a secluded beachfront location. In addition to a beach that’s free of hawkers and tourists, facilities here include a beautiful pool, spa, and fitness room. For more hotel options that make the most of your money, check out our list of the best bang-for-your-buck all-inclusives in the Dominican Republic. If you’re not staying at an all-inclusive resort, it’s wise to ask the hotel employees if they have any safety tips for the local area. They’ll want to keep you happy and healthy.

Our Favorite Resort Wear for the Dominican Republic