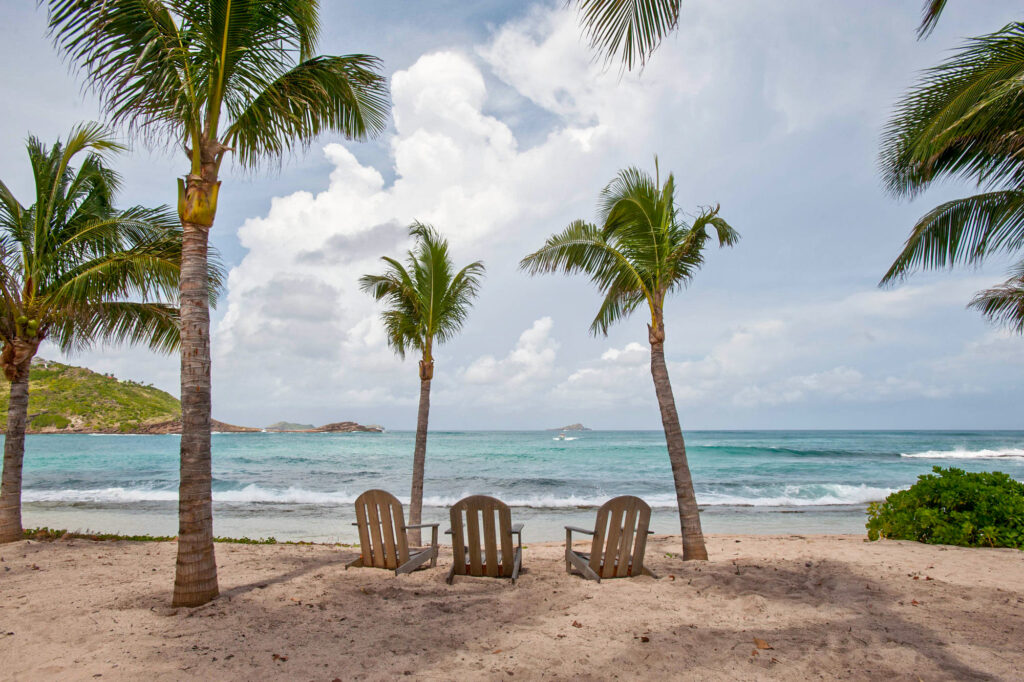 Beach at the Le Guanahani/Oyster

St. Bart's, arguably the Caribbean’s most glamorous island, is a dream destination for sun seekers, lovers of luxury, and Francophiles—with a Caribbean twist. The French island combines the best parts of French culture and the West Indies's weather to bring visitors fabulous hotels, a topnotch culinary scene, and stunning beaches that beg for hours of relaxation time (and maybe a cold bottle or two of sparkling rosé). But before you envision packing your matching designer bags and favorite swimwear, here are 13 things you need to know before visiting St. Bart’s. Number 3 is pretty surprising!

Here's our itinerary for 72 glamorous hours in St. Bart's.

1. There are no direct flights to St. Bart’s from the US mainland.

For many travelers, the ease of travel to the Caribbean is one of the most compelling reasons to visit. Boarding gate to beach in three hours? Sign. Us. Up. But getting to St. Bart’s isn’t so easy. There are no direct flights from the U.S. mainland to St. Bart’s, which means most travelers will connect in either Puerto Rico or St. Maarten. Tradewind Aviation offers daily flights from San Juan, Puerto Rico, while WinAir offers daily flights from St. Maarten. The flight from St. Maarten’s Princess Julianna International Airport (SXM) is only 10 minutes long, but the airport has a reputation for being poorly run and the crowds can be chaotic. From San Juan’s Luis Munoz Marin International Airport (SJU), the flight to St. Bart’s is about an hour, but the airport in San Juan is larger and more efficient than the one in St. Maarten, which affords a more pleasant travel experience. Plus, flights from the United States to San Juan also tend to be cheaper than those to St. Maarten.

If you’re looking to save some cash (or have a fear of precarious aircraft landings…see below), you can also travel from St. Maarten to St. Bart’s via ferry. There are five daily ferries from St. Maarten’s Philipsburg Harbour to St. Bart’s Gustavia Harbour. The ferry ride takes about 45 minutes, and is known to be an unpleasant one for those with a penchant for seasickness.

So while St. Bart’s isn’t as easily accessible as the Bahamas or the Dominican Republic, its lack of direct flights ensures an uncrowded island. Travelers who like to avoid crowds will likely appreciate St. Bart’s exclusive feel. We promise, getting there is worth it.

2. Landing at the Gustaf III Airport isn’t for the faint of heart.

With a 2,100 foot runway wedged between a hill and a beach, St. Bart’s airport, Gustaf III, is only equipped to handle small aircraft landings. The short runway, combined with the island’s turbulence-inducing hilly terrain, can make landing at the St. Bart’s airport a little nerve-racking, even for the most experienced flyers. Rest assured, pilots who fly to St. Bart’s must undergo rigorous training in order to receive landing clearance on the island. But for nervous flyers, or for those who dislike small aircrafts, taking the ferry might be the best option.

3. There are no large hotel chains on St. Bart’s.

If you’re looking to cash in your chain hotel loyalty points on your next hotel booking, St. Bart’s isn’t your best bet. While some resorts on the island are members of luxury collections (Eden Rock is owned by the prestigious Oetker Collection, Le Toiny is Relais & Chateaux, and Le Sereno is a member of Leading Hotels of the World), you won’t find any Marriotts or Hiltons on the island. Every hotel on St. Bart’s is boutique in size (under 100 rooms) and many are independently owned.

4. French is the official language of St. Bart’s, but English is widely spoken.

French is the official language of St. Bart’s and the island is known for its European flair. You’ll see street signs in French (and Swedish, from the island’s early colonial days), hear French conversation at local businesses and restaurants, and mingle with tourists who are…French. But even if you haven’t practiced your Francais since high school, you’ll be able to get by just fine with English. Nearly everyone who works in the tourism industry speaks at least some English and most restaurants have English menus. If you’re really feeling lost in translation, it’s easy enough to find help—St. Bart’s locals are known for their friendliness.

5. The euro is the official St. Bart’s currency but U.S. dollars are accepted nearly everywhere.

You’ll see most things priced in euros during your trip to St. Bart’s, but dollars are widely accepted across the island. If you’re presented with a bill at a restaurant and want to pay in dollars, just ask the waitstaff for the exchange rate…but be warned, the rate will always favor the house. Credit cards are widely accepted across the island, with Visa being slightly more favorable than American Express. And despite St. Bart’s European feel, tipping culture skews more toward North American customs. Many restaurants and service providers will include a 10-15% service charge on your bill. If a service charge is not included, it’s customary to leave an additional tip. Taxi drivers, boat captains, and hotel staff also expect tips for good service.

6. The beach clubs in St. Bart’s are legendary.

Going to St. Bart’s and not spending some time at a beach club is like going to an amusement park and not riding the rides. The beach club culture in St. Bart’s is legendary. There’s a different club for every day of the week and one suited for every personality type. Head to Nikki Beach when you want to take your Sunday brunch game to the next level, head to Shellona when you’re looking for something more laidback, and check out Le Toiny when you’re ready for a rustic-luxe romantic vibe. Ooh la la!

7. There’s a St. Bart’s beach for every personality.

There are 22 public beaches on St. Bart’s, each with a different flair. St. Jean, where the legendary Eden Rock St. Bart’s is located, is the place to see and be seen on the island. Flammands offers postcard worthy white sand and calm waters, while Le Toiny is rustic and windswept. Head to Gouverneur or Saline when you’re feeling a bit risqué — nude sunbathing is 100% encouraged in St. Bart’s. Or if you have the kids in tow, check out Shell Beach, where the sand is composed of thousands of tiny shells.

St. Bart’s isn’t the kind of Caribbean island where you’ll want to check in to your hotel and never leave. There are so many great beaches, clubs, restaurants, shops, and bars to discover across the island — you’ll appreciate the freedom a rental car provides. Taxis are also a limited commodity, especially during high season, so renting a car gives you the flexibility to explore on your own time. Roads are windy, but well cared for, and the island is easy to navigate.

9. You’ll find some of the best dining in the Caribbean on St. Bart’s…

The Caribbean food scene can sometimes be painfully one-dimensional. But food lovers needn’t worry about so-so food in St. Bart’s. In true French fashion, the island is known for its cuisine, and diners have a wealth of options, from fine dining to casual. Check out Maya’s for exceptional Creole cuisine, L’Isola for fine dining Italian, Black Ginger for Thai, and Bonito for fresh seafood.

10…And the best nightlife.

St. Bart’s party hardy reputation isn’t just a rumor — the island knows how to have fun. On any night of the week, there’ll be something going on at one of its legendary bars. Bagatelle might be old news in NYC, but the dancing-on-the-tables scene is still going strong in St. Bart’s. Come for dinner, and stay until the Champagne starts spraying. For a sexy night out, with your partner or a group of friends, Le Ti serves some of the island’s strongest cocktails — with a little side of Burlesque. For something more casual, Le Select is your classic Caribbean dive bar, complete with plastic chairs, bumper sticker-covered walls, and cold bottles of Carib beer.

11. The best time to visit St. Bart’s is December through April.

The best time to visit St. Bart’s is from December through April, when the weather is pleasantly warm, days are sunny, and island life is in full swing. Unfortunately, this is considered peak tourist season in St. Bart’s so travelers can expect to pay high prices for accommodations. From May through November there’s a greater chance of rain, and hurricane season poses a real threat from August through November. Plus, after May many residents leave the island and close down their shops, restaurants, and local businesses for the summer season. If you don’t mind seasonal closures, a “where is everyone?” atmosphere, or rainy, humid weather, then St. Bart’s low season offers some fantastic hotel deals.

12. Speaking of hurricanes, St. Bart’s is nearly recovered from the devastating 2017 hurricane season.

In 2017, when Hurricanes Harvey, Irma, and Maria ravaged the Caribbean and Gulf Coasts, St. Bart’s was greatly impacted — forcing many hotels, restaurants, and local businesses to close. After two years of rebuilding, the island is finally back up and running at its normal speed. Travelers visiting the island in 2020 will experience its greatest renaissance. Hotels have finally reopened (the legendary Eden Rock just opened its doors in November 2019 after completing extensive hurricane renovations), new restaurants are popping up across the island, and locals are returning to their villas. St. Bart’s joie de vivre is back in full swing — a great relief for longtime visitors.

13. St. Bart’s is one of the safest islands in the Caribbean.

Tainted alcohol scares and rising crime rates have many travelers questioning the safety of the Caribbean. But rest assured, St. Bart’s is one of the safest places to visit in the Caribbean. The island is known for its friendly locals and lack of petty crime. There’s virtually no violent crime to speak of on the island, which is why the local police force isn’t even employed 24/7. For emergencies after dark, locals and visitors will need to call the police force on St. Maarten, though this is a known rarity.

Eden Rock is open after two years of renovations and hurricane clean up. Long time visitors will recognize the individually designed villas and rooms, some built into the rocky landscape, come with breathtaking views of the ocean and access to a wide, sandy beach (surrounded by white coral). For restaurants, celebrity chef Jean-Georges is at the helm with a contemporary seasonal menu. It doesn’t get more glamorous than Eden Rock, one of the best boutique hotels in the Caribbean.

Hotel Carl Gustaf is a St. Bart’s hotel that goes hard on the French extras—and the exclusive feel of being catered to by a dedicated staff. Expect Champagne on arrival and a free French breakfast every morning. All suites and villas come with private terraces and private plunge pools, and well-equipped kitchenettes. Carl Gustaf Lounge is one of the top island spots for cocktails—or the house cocktail of cognac, strawberry juice, and Champagne. Note that Hotel Carl Gustaf (or The Carl, as it’s affectionally called) isn’t right on the beach—but the views are iconic and it seems like everyone on the island flocks here for a sunset drink.

What to Wear in St. Bart’s