New York City is a bucket-list destination that's packed with sights and experiences. Among the most famous is the Macy's Thanksgiving Day Parade. However, snagging a prime spot along the parade route can require waking up incredibly early in the morning and jostling with thousands of others for space. But there are ways to get around all of that. Oyster.com has visited over 400 properties in Manhattan, and we know which hotels are along the Macy's parade route (and which ones are the best). Of course, you'll want to make sure you request a room that faces the street to guarantee the best views — and aim for higher floors for vantages of the performers, floats, and bands. Read on for our picks of the best hotels for viewing the Macy's Thanksgiving Day Parade this year (plus one stylish spot that's just off of the parade route). 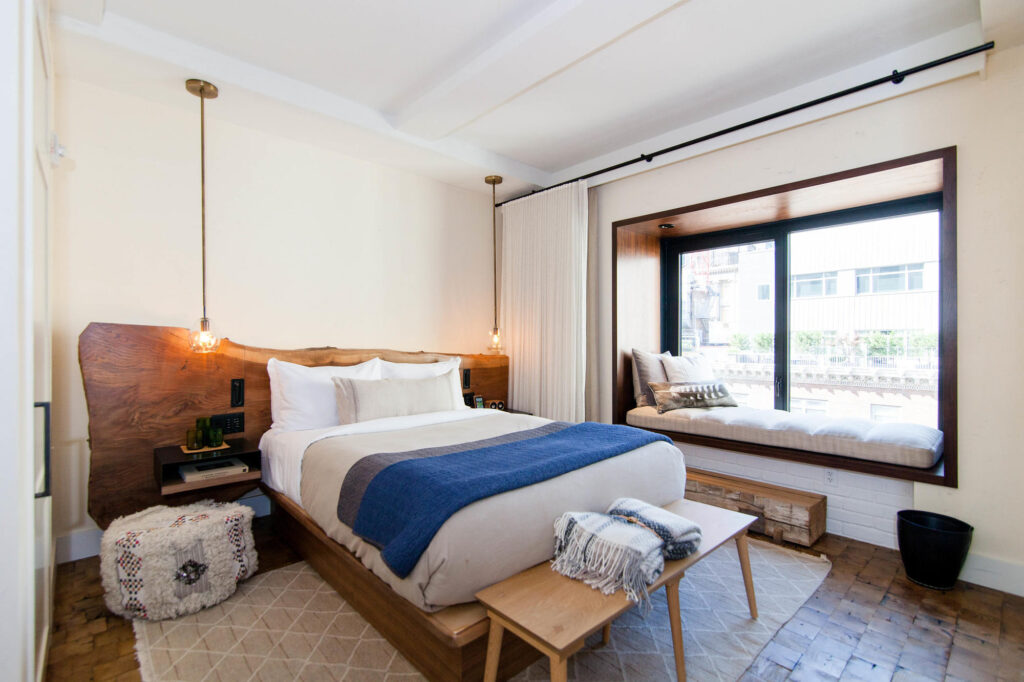 We love the 1 Hotels brand and their Central Park outpost has a prime location for travelers hoping to score a great view of the Macy’s Thanksgiving Day Parade. Views aside, though, 1 Hotel Central Park is a beautiful luxury property with sharp eco-conscious design details and a ton of excellent amenities. Stunning rooms have a nature-meets-city look, with reclaimed wood, green succulents, and brick accents that remind you of the hotel’s location — in the busy heart of the city, but only a block from tranquil Central Park. If you’re after the best parade view, make sure you score a room overlooking Sixth Avenue. Like other 1 Hotel properties, the fitness center and in-room yoga mats bring a bit of wellness to the vibe here, which is perfectly appropriate for working off those turkey day indulgences. 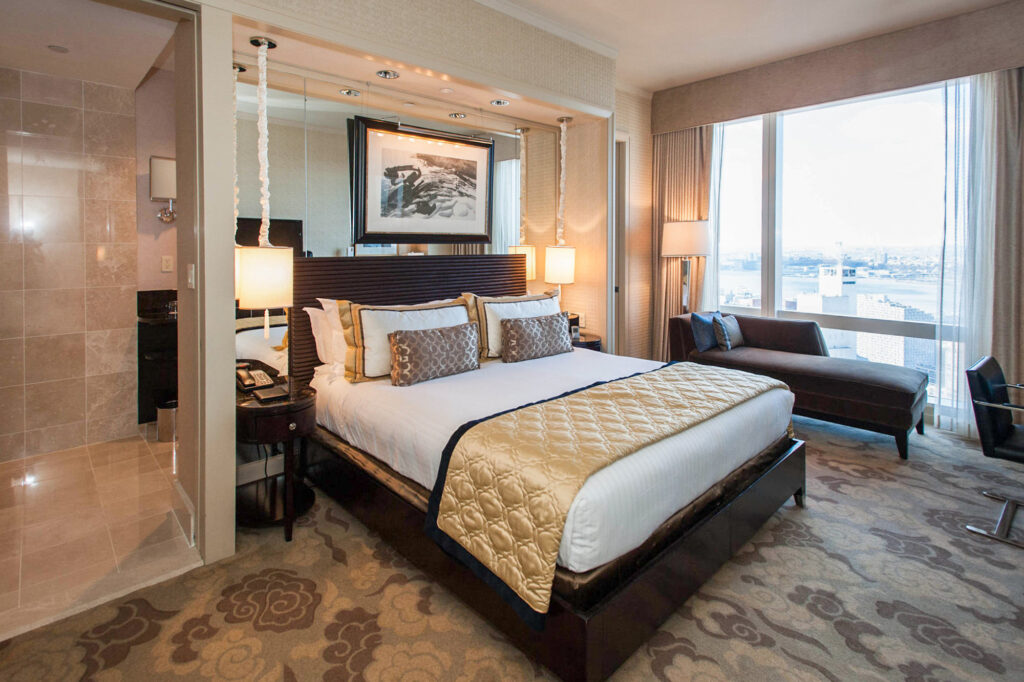 The Mandarin Oriental New York is easily one of the city’s most luxurious and well-positioned hotels. Towering high above Columbus Circle, with prime views of Central Park West, Central Park, and 59th Street, this hotel is also one of the best options for taking in the Macy’s Thanksgiving Day Parade. The hotel’s dizzying array of modern luxuries — including a 75-foot pool, one of the city’s best spas, sweeping views from nearly every common area, and huge bathrooms with deep soaking tubs (even in standard rooms) — make this a true standout for the holidays. 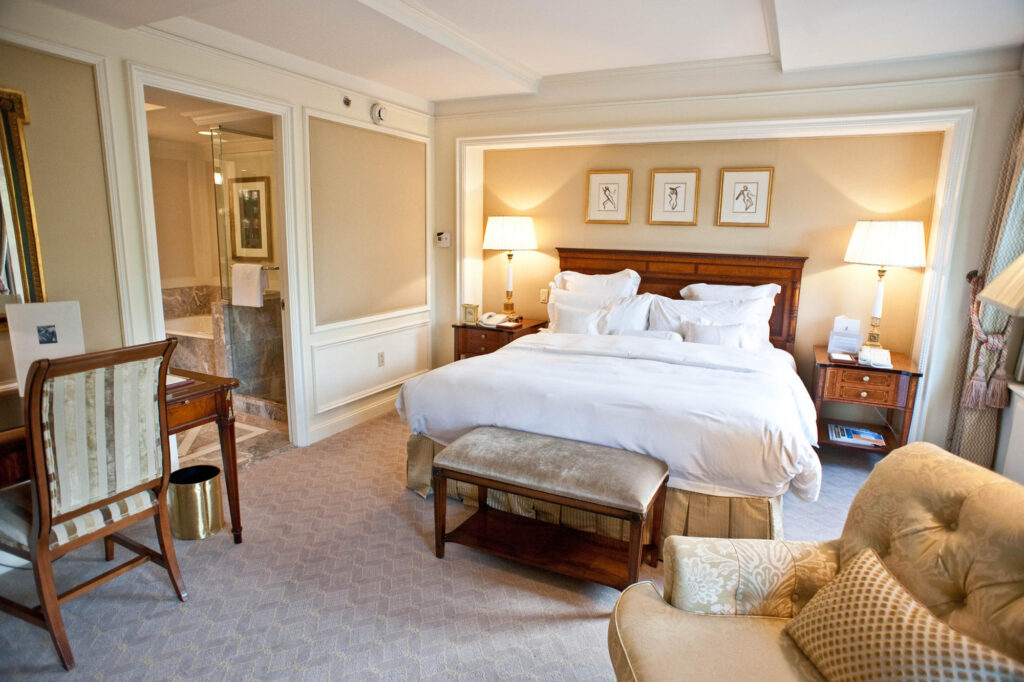 With a tony address, the Ritz-Carlton New York, Central Park offers — as its name suggests — fabulous views of the city’s largest park. That also means prime Macy’s Parade viewing for guests staying in rooms that look down on 59th Street. However, if you aren’t in a room overlooking 59th Street, book a breakfast at the on-site bistro, with windows looking out onto the street. The classic style here makes this an obvious pick for travelers seeking a luxurious atmosphere alongside prime amenities, including a spa, lounge, and 24-hour fitness center. 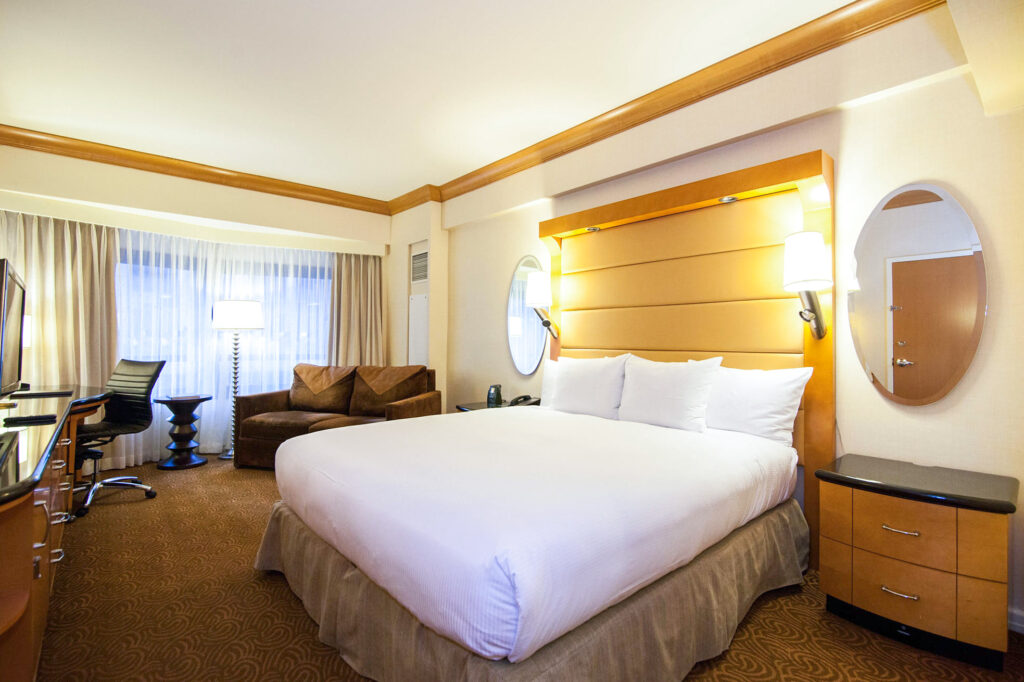 With nearly 2,000 rooms, the New York Hilton Midtown is one of the biggest hotels in the city. You’ll find a dizzying number of amenities here too, including destination bars like its famous all-ice bar (where you sip cocktails decked out like you’re visiting the North Pole). Many of the rooms offer partial or full views of Sixth Avenue and the Macy’s Thanksgiving Day Parade. They’ve also been renovated as of 2015, so you’ll score a pleasantly contemporary space to enjoy the view as well. When the parade is finished, just head across the street to Radio City Music Hall, which is home to the Rockettes’ Christmas Spectacular. Fifth Avenue shopping is also only a block away. 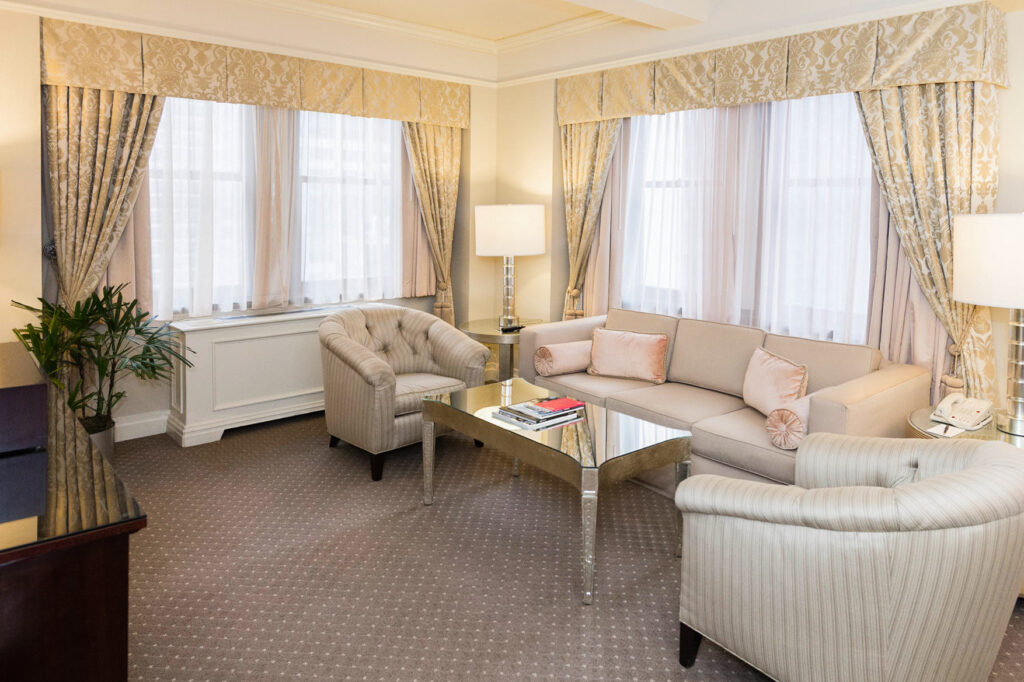 Only a few blocks from Central Park, and just down the street from the Hilton, the Warwick New York is another solid upscale option for parade viewing. This historic landmark from media-magnate William Randolph Hearst, was built in the 1920s and past guests have included Cary Grant (he lived here for 12 years), Audrey Hepburn, and Elvis Presley. Nowadays, updated decor maintains some lovely historic touches. Keep in mind that Standard Rooms here will lack street views (or much natural light), so be sure to request a room with a view of the parade route when you make your booking (keep in mind that it will likely cost extra). 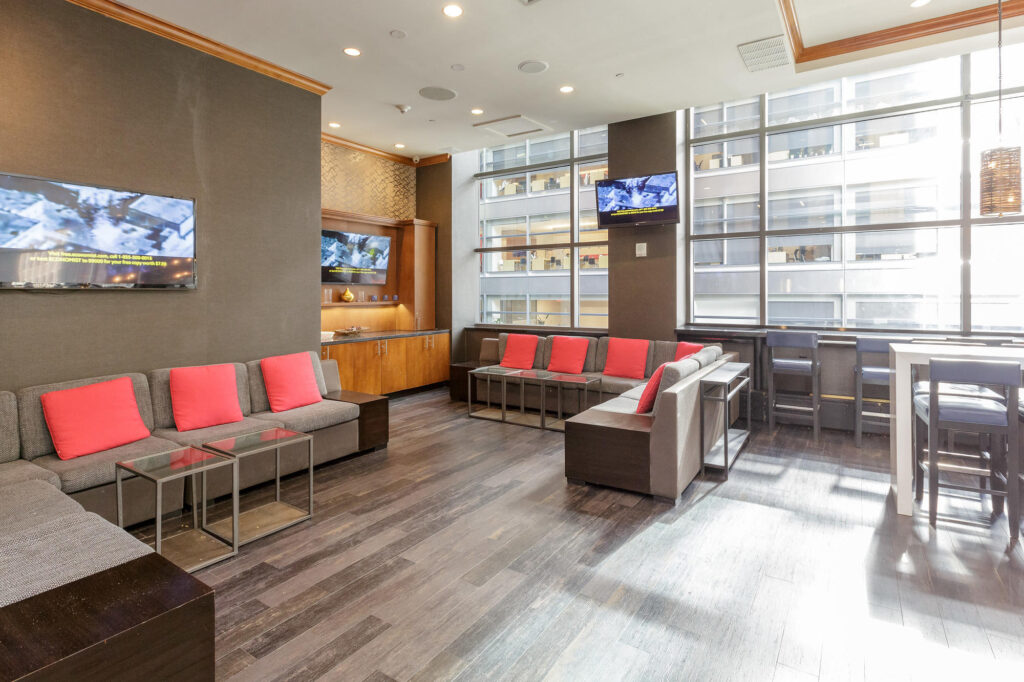 Despite its name, the Residence Inn New York Manhattan/Times Square doesn’t actually overlook Times Square. Instead, the hotel sits right on Sixth Avenue, just north of Bryant Park, making for prime Macy’s Parade viewing. This is a simple options that’s best for families seeking value, as all rooms include kitchenettes and sofa beds. Not all rooms overlook Sixth Avenue, so be sure to request one when booking. You’ll also score a free breakfast buffet and access to the hotel’s fitness center with a stay here. 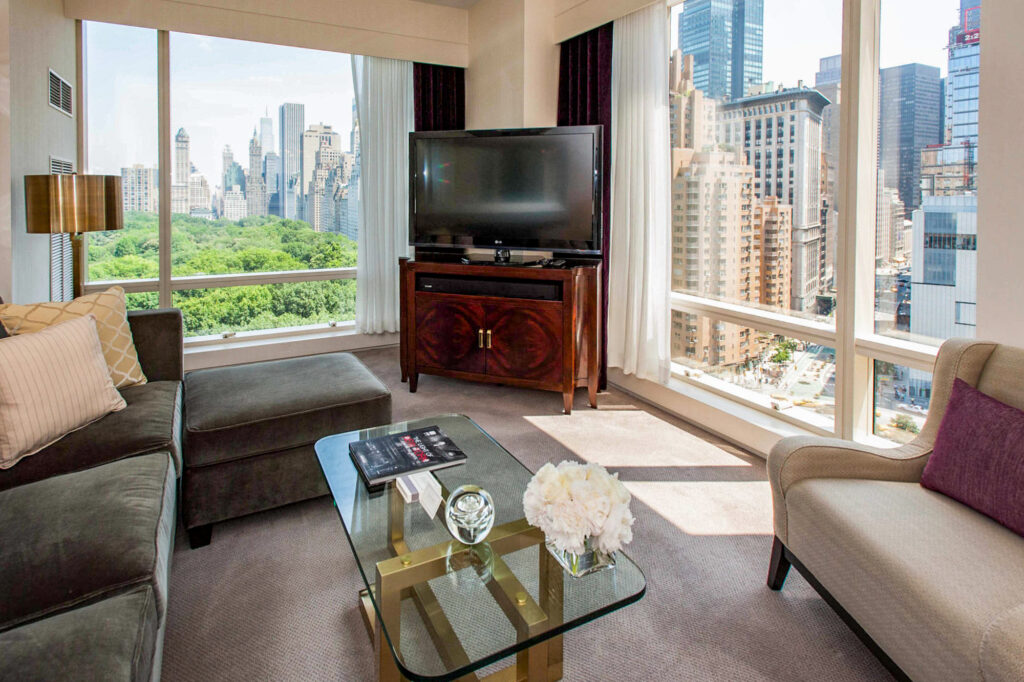 While not as opulent as its nearby Columbus Circle neighbor — the Mandarin Oriental New York — the flagship Trump International Hotel proves to be popular with tourists looking for excellent views of the Macy’s Thanksgiving Day Parade. The hotel overlooks Central Park and many rooms feature spectacular views of the parade. Guests can even opt to book the Thanksgiving Day Parade package for the ultimate experience, which includes hot chocolate (topped with marshmallows) upon arrival, room service-delivered breakfast to be enjoyed while watching the parade, and tickets to the Trump ice-skating rink in the park.

With its iconic location along the southern edge of Central Park, the JW Marriott Essex House is one of the city’s most storied luxury properties. Aside from parade views, the hotel features a beautiful spa, well-equipped fitness center, and tasty on-site restaurant open for breakfast, lunch, and dinner. You’ll also be within an easy walk of Times Square, Lincoln Center, Fifth Avenue shopping, Bryant Park, and Broadway — putting you right in the center of the city’s buzz.

Pricing for The Quin Central Park by Hilton Club

Right on the corner of Sixth Avenue and 57th Street, this modern boutique hotel is a great choice even if you’re not in town for the Macy’s Thanksgiving Day Parade. Rooms are modern and luxurious, and several have views right onto the parade route. We love the attentive concierge service, and the chic design details found throughout the property. You’ll also find a popular restaurant and bar. The Midtown location puts Central Park, Fifth Avenue, and Radio City Music Hall within an easy walk. 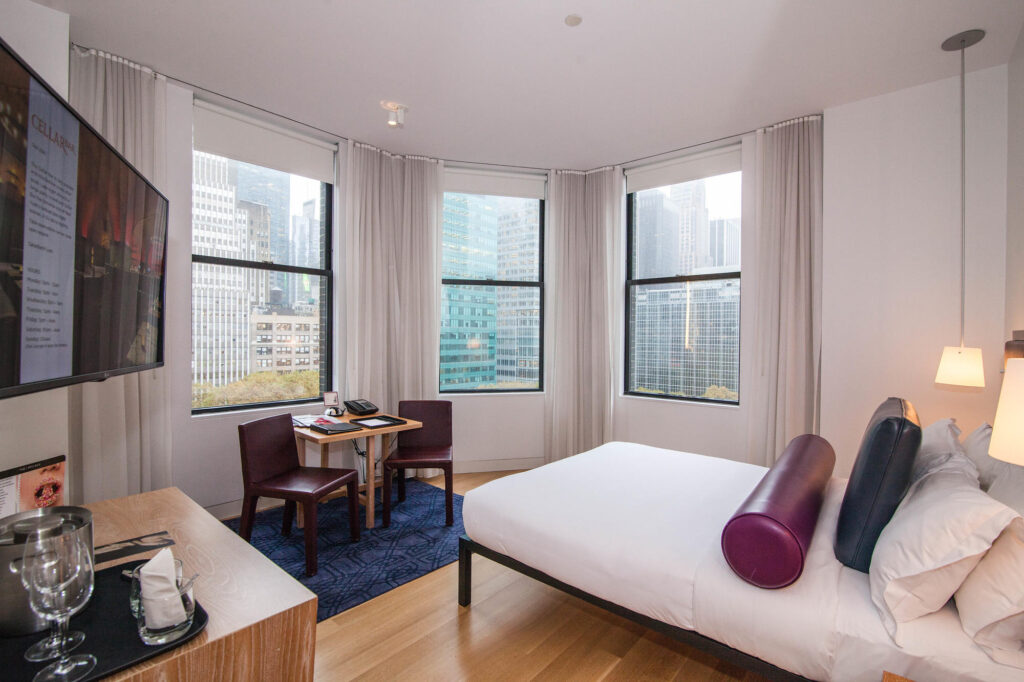 Pricing for The Bryant Park Hotel

For an adult-friendly holiday getaway, the Bryant Park Hotel is a sharp boutique property that’s just off of Sixth Avenue. If you score a room on a higher floor, you’ll have direct views across Bryant Park and up Sixth Avenue to see the Macy’s Parade floats and marching bands. This intimate hotel has a preserved art deco style that makes it a great option for travelers. 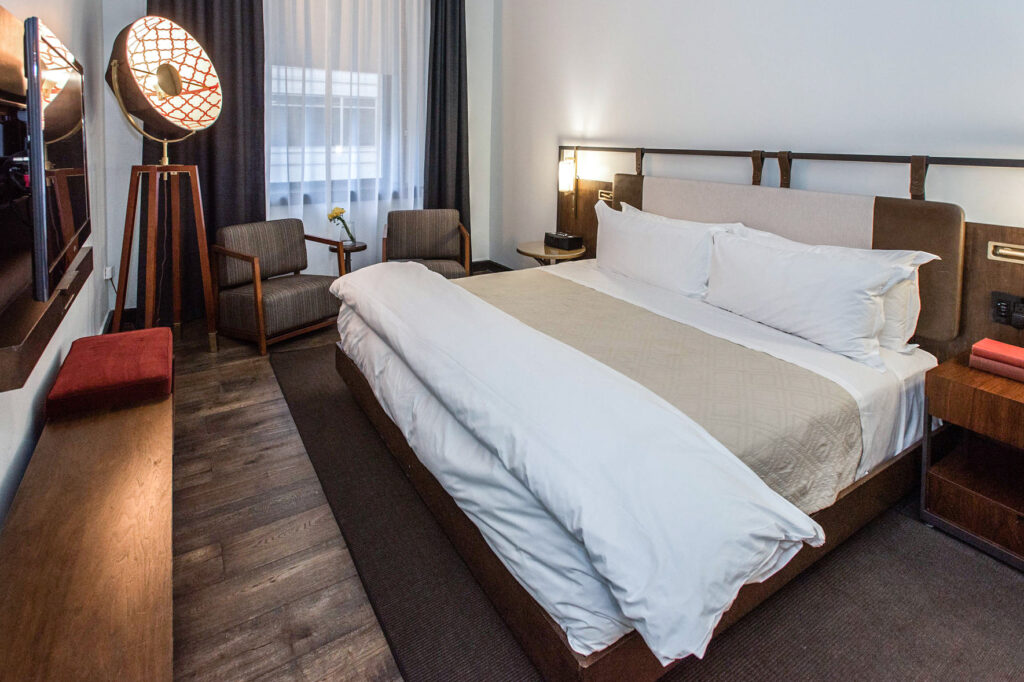 Just off of Sixth Avenue on 38th Street, the Refinery Hotel is stylish property with historic touches — the building was once a tea salon and hat factory. The property’s past inspired its present industrial-chic design. Small details such as decorative milliner’s tools pay homage to the building’s former function, though contemporary art and modern fabrics lend the hotel its stylish overall vibe. You’ll need a streetside room to catch a glimpse of the parade as it passes 38th Street along Sixth Avenue, but you can easily reach the parade route in 30 seconds just outside the hotel’s front door. And when you’ve had enough outdoor festivities, head to the popular indoor rooftop bar to warm up with a cocktail.