In a country with a unique culture like Japan, visitors can feel daunted by the rules and social norms that regulate public life and interpersonal relations. Foreigners visiting Japan are not expected to be familiar with Japanese etiquette, but knowing a few basics will go a long way in helping you adapt to local customs and avoid making cultural gaffes. If you're planning a trip to Japan, here are a few cultural faux pas you should be aware of.

1. Don’t break the rules of chopstick etiquette in Japan.

The Japanese will be impressed if you’re comfortable using chopsticks. But making the following faux pas will definitely raise eyebrows. Never stick your chopsticks vertically in your bowl of rice — this resembles a funeral ritual. If you need to put them down, always use the chopstick holder next to your plate. Avoid using your chopsticks to pass food to someone else’s chopsticks, as this is another taboo. When sharing dishes, use your chopsticks to take the food and put it on your own plate before eating it. And don’t rub your chopsticks together – it’s rude.

If you’re visiting a Japanese home, your shoes should be immediately removed once you’re through the door. “Outdoor” shoes are considered unclean, and for this reason they’re replaced with “indoor” slippers at the entranceway. This no-shoe rule also extends to traditional ryoken hotels, some public spaces like temples and shrines, fitting rooms, and schools and hospitals. If you see shoes lined up at a doorway or entrance then you can be sure that they must be removed, and usually slippers will be available for you to slip on. Shoes are also a no-no in the areas of restaurants where diners sit on the floor on traditional tatami mats. In this case, slippers are not worn at all — they could damage the straw matting — so make sure your socks match and are free of holes! Another important rule is to exchange your “indoor” slippers for the special “toilet” slippers when using the toilet. These are kept at the doorway of the toilet area (which is often separate from the bathroom) specially for this purpose. And don’t forget to once again do the switch when leaving the toilet area!

3. Skipping the line when waiting for trains (or anything else) in Japan.

That whole stereotype that Japan is an incredibly orderly and organized place? It’s true. With that in mind, you should expect to find single-file lines anywhere you have to wait for anything. That includes bus stops, train platforms, elevators, street food vendors, vending machines, and so on. On platforms at train stations, there are lines on the floor indicating where to stand and wait for your train. When the train arrives, the doors will open exactly in-between the two parallel lines that have been formed by waiting commuters. Needless to say, do wait until passengers have left the train before boarding single file.

4. Avoid eating on the go when you’re in Japan. 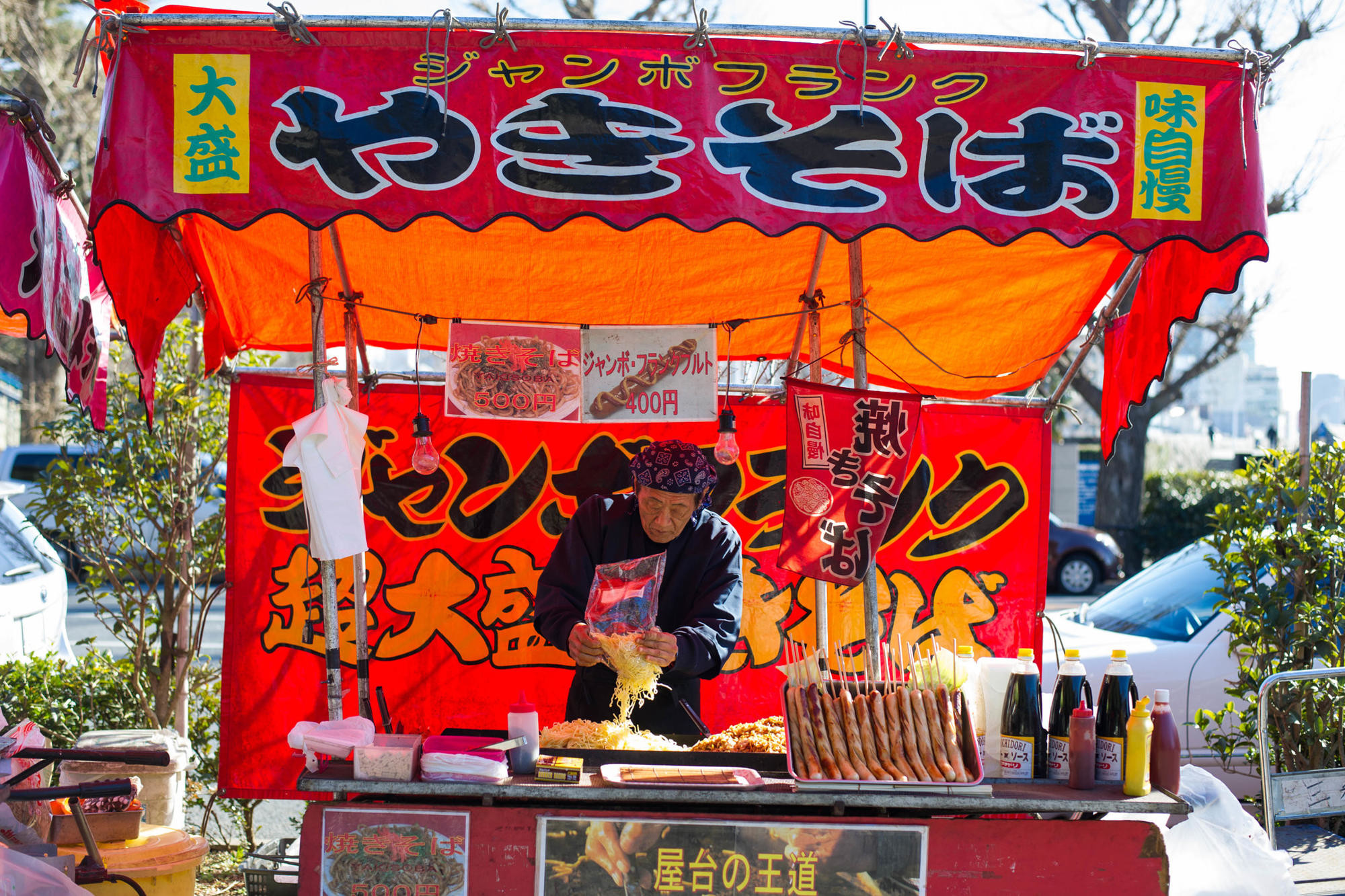 In Japan, people don’t generally eat or drink on the go. Fast food sold at street stands and stalls is eaten standing up in designated areas (often marked with lines on the pavement). Drinks bought from the many vending machines available in public places are also consumed immediately and the can or bottle tossed in the recycling bin next to the machine. Similarly, eating or drinking on public transport is considered bad manners, but an exception is made for this on long-distance trains.

5. Don’t get into a bathtub before showering first. 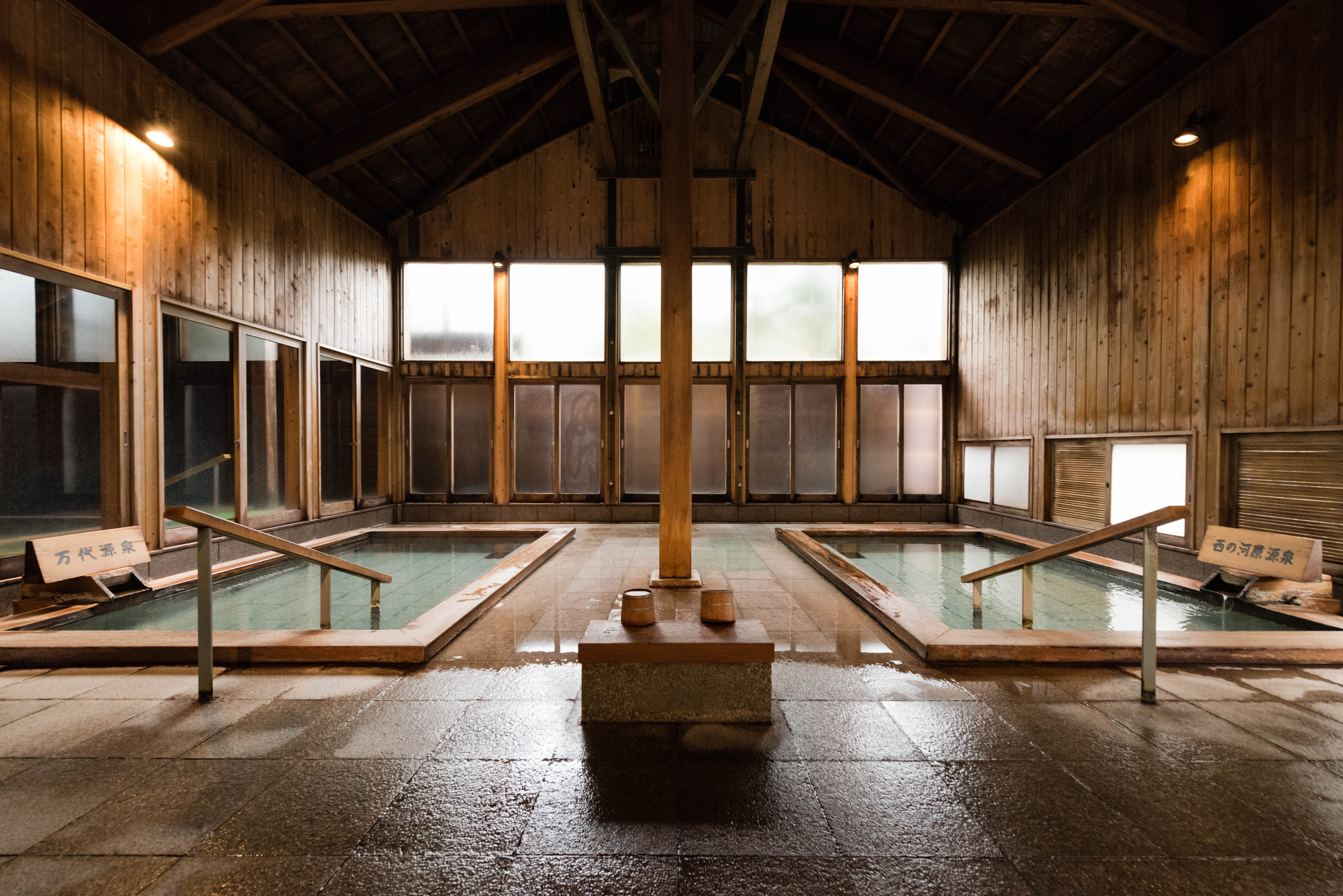 The baths at a traditional Kusatsu Onsen Boun in Japan.

Most Japanese homes have a bathtub that’s often already filled with heated water. These are reserved for having a relaxing soak and not for washing the body. This traditional Japanese bathtub called furo is often square in shape, and it’s smaller yet deeper than a conventional Western tub for this reason. Before slipping into the tub, a thorough scrub is required using a shower or faucet typically located nearby. If visiting a public bath or onsen, the same “shower first” rule is required before entering the communal bath. Other rules apply to the onsen: Bathing suits are not allowed, hair should be tied up to keep it out of the bath water, never let your towel touch the water, and don’t swim in the onsen.

6. Don’t blow your nose in public.

Blowing your nose in public in Japan is considered to be uncouth. Find a bathroom or another private place if you have to attend to a running nose. It’s common to see people wearing face masks in public, especially in the winter. This means they have a cold and want to avoid spreading germs and infecting others (or want to avoid catching one). You can buy these masks in a variety of colors and patterns, and they are — essentially — a fashion statement at this point.

Unlike in the U.S. where tipping is mandatory, Japan does not have a tipping culture, and leaving a tip may even be taken as an insult. Service is included in the bill at restaurants, and even taxi drivers will refuse to have a fare rounded off. Leave a few coins on the table and the waiter will surely run after you to return your forgotten change!

8. Avoid loud phone conversations while on public transit in Japan.

The Japanese tend to use their mobile phones discreetly and will keep telephone discussions brief and as quiet as possible when in public. When traveling on public transit, many people are busy using their phones to text, listen to music, watch videos, or read, but telephone calls are very rare. If you have to use your phone in a public area, move to a quiet place with few people around.

9. Don’t point in Japan (and try to avoid raising your voice in anger). 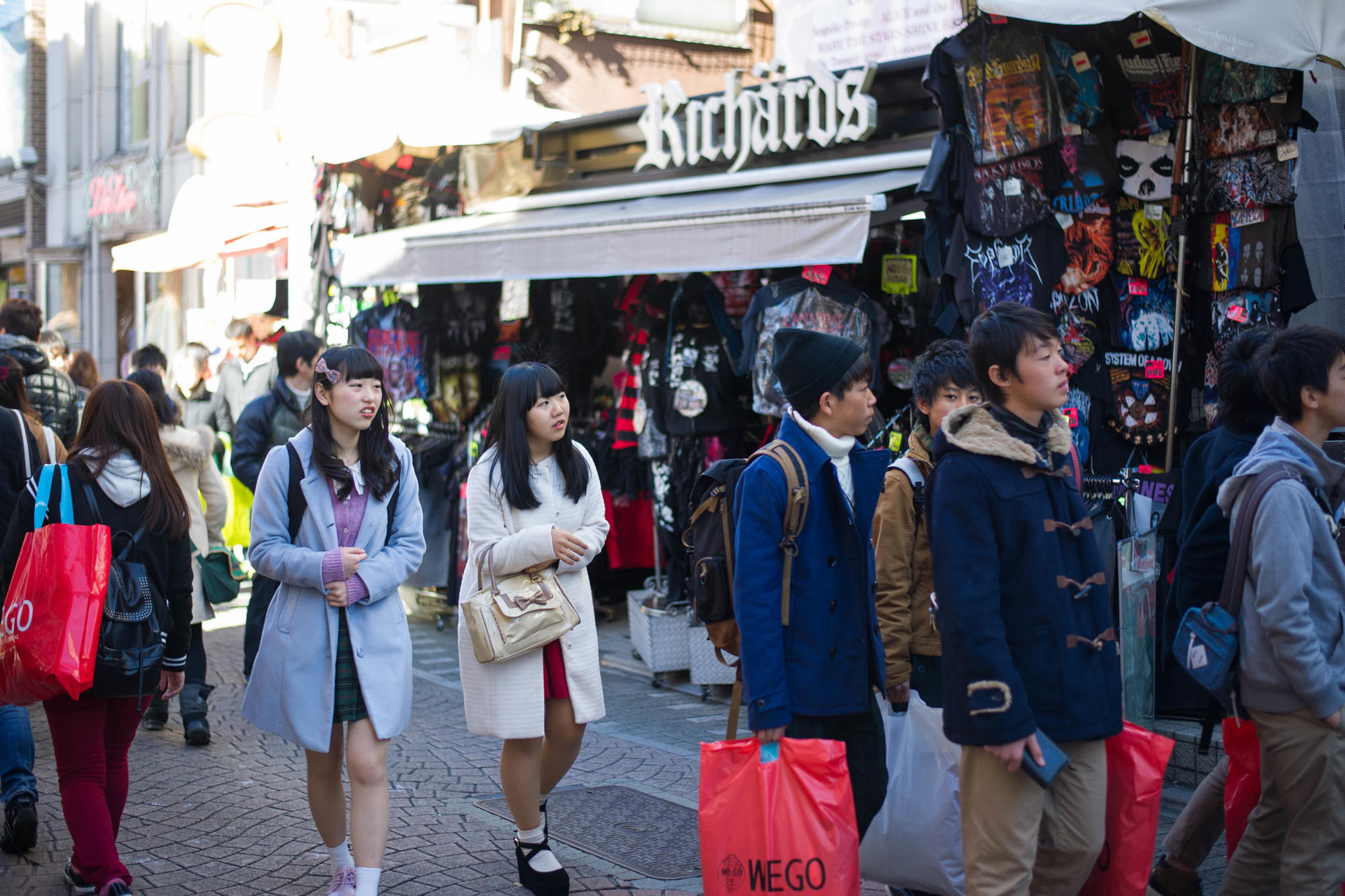 Pointing at people or things is considered rude in Japan. Instead of using a finger to point at something, the Japanese use a hand to gently wave at what they would like to indicate. When referring to themselves, people will use their forefinger to touch their nose instead of pointing at themselves. It’s also considered bad manners to use your chopsticks to point at something. In the same vein, manners go a long way in any type of communication, and raising your voice in anger or misunderstanding is majorly taboo.

In Japan, soy sauce is never poured directly on rice. Always pour soy sauce into the small dish provided specially for this and not directly on your rice or other food. Then use your chopsticks to dip the sushi or sashimi in the sauce.

11. Avoiding giving and receiving things with one hand.

In Japan, both hands are always used when giving and receiving things, including small objects like business cards. When paying at a shop or cafe, it’s common to place the money on the small tray next to the cash register instead of handing it directly to the cashier.

When socializing with friends or colleagues, refill each person’s glass once they’re empty but not your own, which is considered rude. After you’ve finished serving your companions they will do the same for you. A bottle is always held with both hands when pouring.

13. Don’t expect to use onsen, pools, or gyms with visible tattoos in Japan. 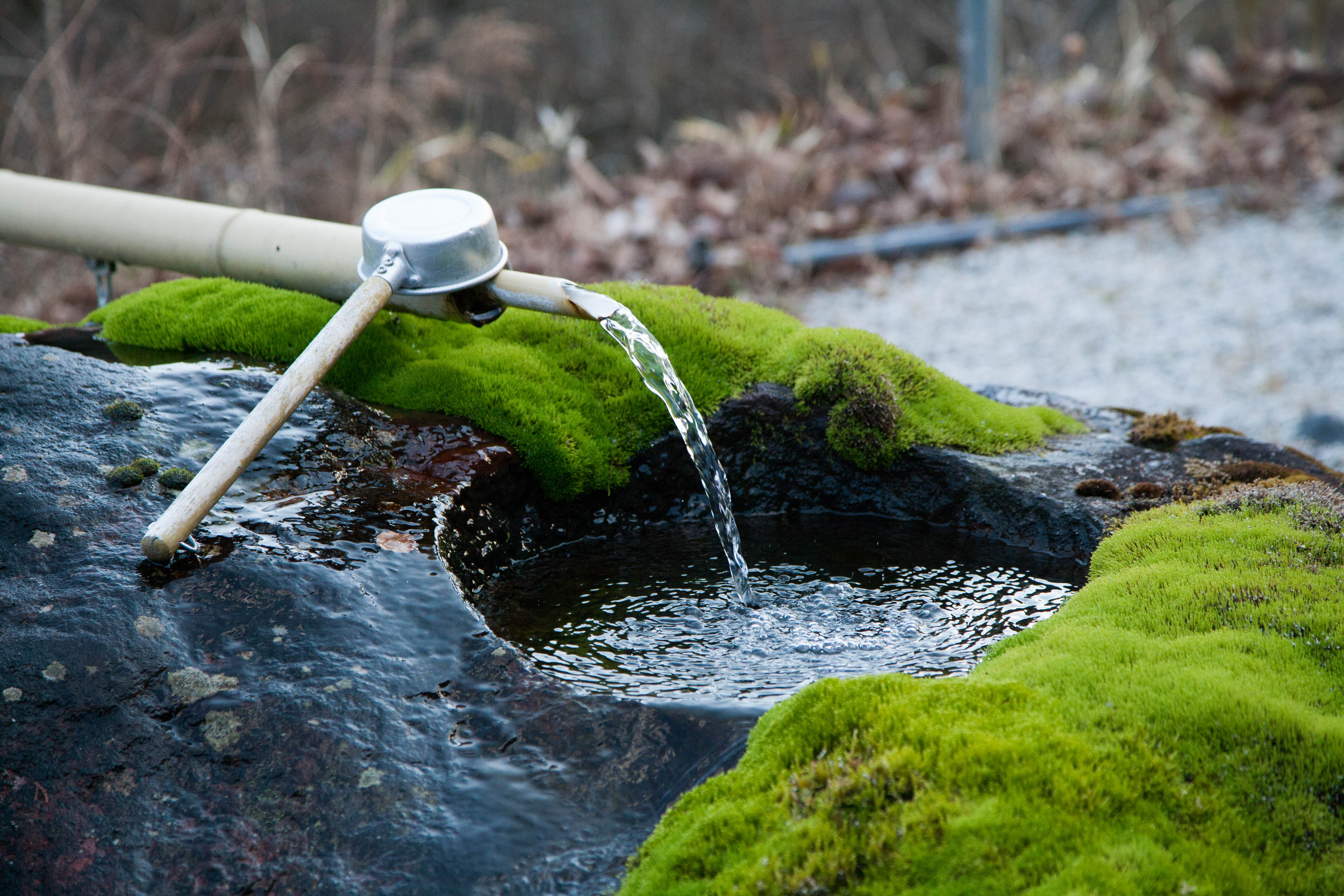 Waters at a traditional Japanese onsen at the Okunoin Hotel Tokugawa.

While tattoos are almost the norm rather than the exception in many western nations, they are still largely considered taboo in Japan. While this is largely ascribed to their historical connection with organized crime, the official answer is unclear. In any case, if you have extensive visible tattoos, you should expect to be prohibited from traditional Japanese onsen (or to book an expensive private session in your hotel’s onsen — though this isn’t always a given either). Your visible tattoos should also be covered up in any pools or gyms. Of course, there are exceptions to all of these rules, but it’s worth inquiring ahead of time if you’re planning on hitting up a pool, gym, or onsen and have extensive tattoos. Some hotels will provide wetsuit style shirt to cover you, but they won’t always do the trick. 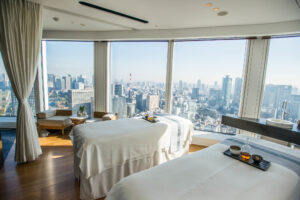 The Andaz Tokyo Toranomon Hills is one of Tokyo’s best luxury hotels. It was built in the top floors (47 through 51) of the Toranomon Hills skyscraper, with enormous windows overlooking Tokyo. Luxurious guest rooms have free minibars, large soaking tubs, and plenty of closet space.