These days, there are more ways than ever to skip the line and get to your gate faster. However, TSA PreCheck remains the most popular security pre-clearance program in the U.S. While the L.A. Times reports that TSA wait times in the United States have shown a small average decrease, you'll still find epic waits at the nation's busiest hubs, like JFK, Newark, Miami, and Atlanta.

For those who are worried about missing out on that trip of a lifetime because they were stuck waiting for folks to empty their water bottles into the garbage, the TSA PreCheck program -- introduced to help "trusted travelers" cut down on the hassle -- can be a solid bet. But you shouldn't expect it to be a silver bullet that will get you to your gate on time. As the program continues to grow, it inevitably creates problems of congestion on its own, as reported by USA Today and Business Insider in recent years.

Still, for budget-conscious travelers who are on the go frequently, TSA PreCheck can still be especially worth it. But there are some things you should know before you sign up. Read on for our must-know tips about TSA PreCheck. If you'd like a breakdown of CLEAR vs. TSA PreCheck vs. Global Entry, check out Oyster.com's handy cheat sheet here.

1. Almost anyone can qualify for TSA PreCheck.

The TSA PreCheck program isn’t just for diplomats and dignitaries. The only requirements are being a U.S. citizen or lawful permanent resident. Disqualifications may include customs violations, having been convicted of a crime, or being under investigation for a crime. The U.S. Department of Homeland Security is in charge of running in-depth background checks on applicants, so be assured that trying to hide anything from them will result in a denied application.

2. There are other options aside from TSA PreCheck.

Gone are the days when TSA PreCheck was the only pre-clearance program in the U.S. These days, the major players are CLEAR, Global Entry, and TSA PreCheck. For an in-depth analysis of the difference between them, read our breakdown here. TSA PreCheck is the most basic — it’s also the cheapest and will cover you for five years. The main benefit of TSA PreCheck is that it allows you to go through security without removing jackets, shoes, belts, or liquids. That can make the separate TSA PreCheck lines move faster in many cases. Global Entry adds expedited screening at U.S. Customs and Border Protection checkpoints when you return from abroad. Registration for either is good for five years. TSA PreCheck will prove worthwhile for travelers who do the bulk of their flying domestically. If you plan on flying internationally more than once a year, Global Entry is the way to go. CLEAR is one of the newest additions to the fold, and offers benefits like the prospect of paperless boarding.

3. There aren’t always TSA Pre-Check security lines at every airport.

While the network of U.S. airports with TSA PreCheck lines has increased dramatically over the past several years, you shouldn’t always expect one. To date, over 200 airports across the United States have TSA PreCheck capabilities. However, even within those airports, the reality of there being a separate TSA PreCheck line doesn’t always play out. JFK Airport in New York City has some terminals that advertise a separate TSA line, though in practice they aren’t distinct (meaning you’ll wait along with everyone else — though you can leave your shoes, jacket, and belt on). You should also keep in mind that even if your departing airport is part of TSA PreCheck, the airline on which you’re flying may not be, meaning you’ll also wait in the regular line.

4. You must add your Known Traveler Number when you book your flight, or you won’t be able to use the TSA PreCheck Line.

This applies to every pre-clearance program, from CLEAR to Global Entry, but is something many travelers may not understand. You must add your Known Traveler Number at the time you make your booking. This way, the number appears when the airline issues your ticket and will also be on your boarding pass. If you try to use the TSA PreCheck line without the number on your boarding pass, and present your Global Entry ID card or TSA PreCheck confirmation email, you will be sent to the regular security line.

5. You can apply for TSA PreCheck online and it costs about the same as a passport.

Wondering how to apply for TSA PreCheck? It’s simple. You start by creating an account at the Global Online Enrollment System (GOES). This form allows you to register for several different programs, so make you sure you select the option you’re seeking. It takes about a half-hour to complete and asks for some rather detailed information, including your employment history and residences for the last five years. Keep your passport and driver’s license handy to speed things up. After submitting the application, conditional approval generally doesn’t take much longer than week. When you apply, you’ll be asked for your credit card or bank account information. Global Entry costs $100, while the basic TSA PreCheck option asks for a slightly lower fee of $85. Once this is complete, you’ll have to show up for a short in-person interview. If you’ve applied for Global Entry, this can be completed with U.S. Border Control upon returning, so long as your airport has interview-on-arrival capabilities.

6. You may have to wait a long time for TSA PreCheck approval to arrive.

As more and more people try to enroll in TSA PreCheck or Global Entry, they find themselves waiting longer for confirmation of their conditional approval or interview slots. USA Today reports that wait times in late 2019 can be up to 90 days for around a third of applicants. There are things you can do, however, to avoid these jaw-dropping wait times. If your closest enrollment center is showing month-long waits, research other nearby centers to check if they allow walk-ins for those who are pre-approved online. Call ahead or search user reviews for the average wait times at those locations. If you’re in a time crunch and there’s more than one office nearby, it may pay to travel to the one farther from home in order to get interviewed sooner.

7. Is TSA PreCheck worth it? That depends.

Since there are so many options out there for pre-clearance programs now, we often hear the question: “Is TSA PreCheck even worth it?” The answer is yes and no. Let’s start with what it gets you: TSA PreCheck allows you to leave your shoes, jackets, and belts on; keep your liquids and laptops in bags; and — if available — use the expedited TSA PreCheck security line. If you only fly once or twice a year, it might not be worth it for you. However, if you take numerous domestic flights within the U.S. or are a business traveler who criss-crosses the country, TSA PreCheck can alleviate your security line headaches. If you are a frequent international traveler, it’s worth shelling out the extra $15 for Global Entry, as your processing times for re-entering the United States will be drastically reduced at border control. Again, though, if you only fly abroad once a year, Global Entry might not be worth it (also, if your travel is predominantly international, don’t opt to only enroll in TSA PreCheck). Keep in mind that Global Entry offers the same perks as TSA PreCheck plus the ability to move quickly through border control, so if your flying habits are a combination of several domestic and international trips, you should also opt for Global Entry.

Traveling? Consider the Carry-On from Away: 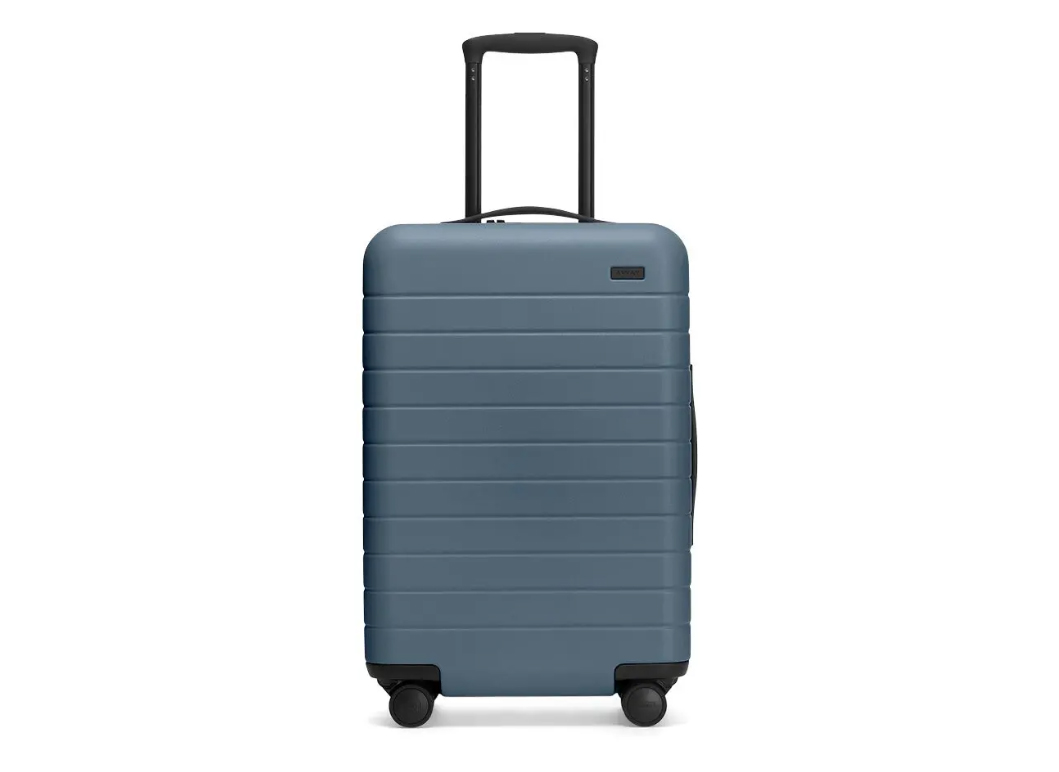 The Bigger Carry-On from Away

The Carry-On from Away is our favorite travel bag to date. With a TSA-approved locking system, 360 degree spinning wheels, and a hard shell exterior, it’s built to be the last bag you’ll ever buy.