Sicily has been the nerve center of the Mediterranean for millennia. The largest island in Italy, Sicily once attracted ancient Greeks, Phoenicians, Arabs, and Normans (to name a few of its past rulers). Today, it pulls in millions of annual tourists who come to tour world-class ruins, indulge in exceptionally fresh seafood and local wine, and see the smoke rise from the largest volcano in Europe. Exploring the sun-soaked small towns of Sicily is as essential as visiting its major attractions and tasting its distinct cuisine. From charming seaports to dazzling hilltop villages, here are some of the most beautiful towns in Sicily.

Perched on a hill overlooking the sparkling Ionian Sea, Taormina has been luring travelers with its incredible beauty for a long time. In the early 20th century, Taormina’s eye appeal even convinced D.H. Lawrence, Truman Capote, and Tennessee Williams to live in town for a period, and to this day, it retains a healthy dose of VIP-worthy glamour. The hilltop town is home to a Greco-Roman amphitheater from the third century B.C. and medieval palaces, including the Gothic Palazzo Duchi di Santo Stefano and the fortress-like Palazzo Corvaja. Corso Umberto, the lively main thoroughfare, is filled with restaurants, shops, and markets. Taormina is a 15-minute drive from the nature reserve of Isola Bella and a 20- to 25-minute drive from the beach resort of Giardini Naxos. Like many of Sicily’s hill towns, Taormina can be challenging to traverse, especially for travelers with bad knees and low stamina.

Cefalu is the Mediterranean beach town par excellence. Located on Sicily’s northern coast, this medieval port town has prettiness to spare. Below an imposing hulk of rugged mountain, a tangle of tawny stone buildings and cobbled streets runs right up to a waterfront promenade, white sandy beach, and the brilliant teal waters of the Bay of Cefalu, where fishing boats bob up and down. Fuel up on calzone and panelle (Sicilian chickpea fritters) before climbing to the top of the spectacular La Rocca for unforgettable views of the city, sea, and surrounding countryside. Later, reward yourself with grilled seafood, fresh homemade pasta, and a glass of wine at one of the town’s many excellent trattorias.

The first thing to know about Ragusa is that it has two distinct sides: Ragusa Superiore (upper town) and Ragusa Ibla (historic center). If atmosphere is what you’re after, skip the upper town altogether and stick to lower section, a UNESCO World Heritage site. Unlike its modern other half, Ragusa Ibla is an 18th-century jewel, with palazzos, alleys, Baroque churches (don’t miss the Duomo di San Giorgio, shaped like a three-tier wedding cake), and peach-hued buildings clinging to the hillside. Your calves and knee joints will inevitably need a break from navigating the hilly streets; when the moment strikes, treat yourself to arancini and cannoli (yes, multiple) at Cantunera Ibla.

Syracuse is a small seaside town with a mighty backstory. A major player in the ancient world (rivaling Athens in size circa the fifth century B.C.), Syracuse was a critical crossroads of “Magna Graecia” (or “Greater Greece”) before becoming the capital of the Byzantine Empire. Today, the city is a UNESCO World Heritage site and a very worthy addition to any Sicily itinerary. Accessed by bridges, the little island of Ortygia (Syracuse’s old town) is landmark central — with the UNESCO-listed Duomo and Piazza del Duomo (be sure to duck inside the church of Santa Lucia alla Badia to see a Caravaggio oil painting from 1608), as well as the Fountain of Arethusa, a freshwater spring that has made appearances in Greek myths and literature by Alexander Pope and William Wordsworth. Ortygia is also home to a daily market bustling with locals buying cheese, meat, swordfish, lemons, peaches, tomatoes, and spices. Stop by the famous sandwich counter Caseificio Borderi for a monster panini piled high with super-fresh ingredients.

About 30 minutes southwest of Syracuse is the small, stunning city of Noto, another UNESCO World Heritage site. Surrounded by rugged foothills (Noto is a popular home base for hikers) and sparkling beaches, the hillside town wins over visitors with its gorgeously intact, golden limestone Baroque architecture and easy, breezy seaside vibe. The centro storico (historic center) is filled with palazzos, cathedrals, churches, chapels, restaurants, and cafes. The beautifully restored Palazzo di Lorenzo Castelluccio and the 18th-century, iron-balcony-clad Palazzo Nicolaci are not to be missed. Indulge in a big scoop of gelato, a ricotta-and-candied-fruit-filled slice of cassata, and a creamy almond granita from Caffe Sicilia, but know that it’s likely that no other gelato on your vacation will compare.

History buffs will love breaking down the many layers — Carthaginian, Roman, Vandal, Byzantine, Arab — of this ancient city on Sicily’s west coast. The lovely port, set on a peninsula below Mount Erice (a favorite hiking destination), Trapani offers a fascinating mix of crystal-clear beaches and narrow city streets packed with Sicilian Baroque and medieval architecture. Seafood restaurants and lively wine bars are plentiful (try the fried calamari and fish couscous at ‘A NASSA Seafood), and the Trapani Salt Pans Natural Reserve (and Salt Museum set in a 300-year-old salt mill) makes an excellent excursion. Ferries to the Egadi Islands and Pantelleria depart from Trapani frequently during the high season.

Sicily rivals Tuscany when it comes to dramatic hilltop towns. Built atop a rocky hill, the UNESCO-listed town of Modica is famous for its chocolate-making history and densely clustered Sicilian Baroque buildings. (Like Ragusa, Modica is split into two parts: upper and lower. Modica’s upper section is the older of the two.) The vertical nature of Modica is best illustrated by the Cathedral of San Giorgio and its 300 front steps — especially beautiful when lit up at night. Other landmarks to discover via the town’s steep staircases and twisting streets include the Castle of the Counts, the cave church Chiesa di San Nicolo Inferiore, and the pretty little Chiesa di San Pietro. After climbing up to the highest point for breathtaking views of the countryside, reward yourself with a cup of smooth hot chocolate and a pistachio cannolo from Antica Dolceria Bonajuto, Modica’s oldest chocolate shop.

What to Bring: Dresses from Reformation 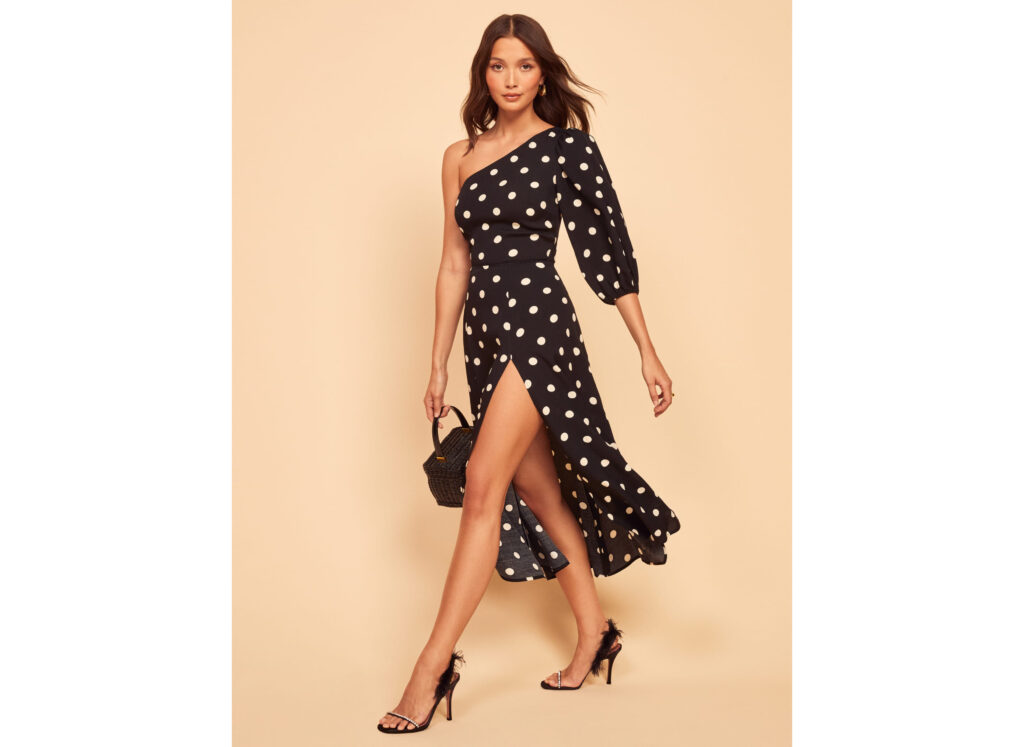 Look the part on your Italian adventure with sustainable, stylish dresses from Reformation.