Window or aisle? If only it were that simple. For travelers without the means to book into first-class on every flight (so, most of us), the range of airline seat options available these days allows everyone the chance to upgrade from basic, no-frills coach without spending an arm and a leg. Whether you’re after extra baggage, complimentary drinks, maximum leg room, total privacy, or fine-dining, there’s an airline seat for you. We looked at a range of major airlines, including American, United, Alaska, Delta, and Virgin, to decode the mysteries of basic economy, premium economy, and beyond. Here’s what’s what in the world of airline seat terminology. 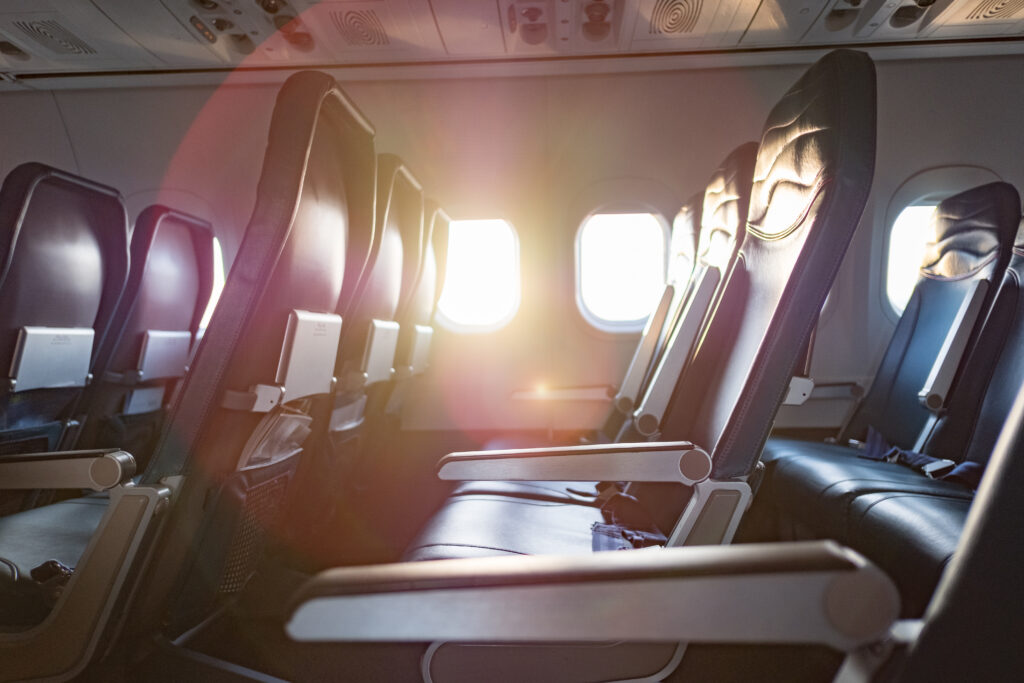 What Is Basic Economy?

Economy is the catchall term that refers to the cheapest, no-frills seat option — ideal for those who want to keep costs low. However, as anyone who has ever booked a flight will know, there are certain levels within economy that add attractive features for a slightly higher price. Seating options start with Basic Economy (almost always non-changeable and non-refundable), and naturally, each airline has its own version that largely offers the same amenities. Meals, entertainment, and stowed baggage all tend to have some restrictions, depending on the route and whether it’s a domestic or international flight, though there is some leeway to be found. For example, while American, Delta, and United don’t offer complimentary seat selection at booking for this fare level, Alaska’s Saver Fare and Virgin Atlantic’s Economy Light both include pre-selected seats at their basic price.

Even within economy, most airlines offer extra benefits for those willing to pay a little more. American, United, and Delta offer Preferred Seats, which allow for seat selection at booking. Meanwhile, Virgin Atlantic’s Economy Classic ups the ante with a ‘free’ 23-kilogram checked bag. Inserting another level into Economy, American’s Main Cabin Extra and Delta’s Comfort+ offer extra legroom and early boarding. Oh, and if you thought the overhead bin space came with your basic economy seat, folks who book a Main Cabin Extra or Comfort+ seat have priority, so there’s always a chance you’ll have to stow it at the front of the plane. It’s a minefield out there, and even in economy, it can seem like there’s someone on a grade above yours.

What Is Premium Economy?

Don’t be fooled by the name — Premium Economy is a big step up from the economy seats in the main cabin. Not only does Premium Economy offer extra legroom, seats that recline to a greater pitch, and enhanced food and beverage options, but it also comes in its own dedicated cabin, often with the perk of a Premium Economy airport lounge.

The main selling points for a Premium Economy seat are the extra width and legroom, along with the relative exclusivity of a separate cabin, meaning a potentially smoother, quieter flight. Delta’s Premium Select (available on international routes), United’s Economy Plus (available on international routes), American’s Premium Economy, and Virgin Atlantic’s Economy Delight all offer the plush, reclining seats that you would generally find in first-class on domestic flights. Plus, the seats are located in a separate cabin from regular coach. Alaska’s premium offering is a cheaper upgrade, but it comes without the benefit of a separate cabin. All Premium Economy seats tend to include priority bin space in overhead compartments, a checked baggage allowance, early boarding, complimentary alcoholic beverages, and a greater choice of meals and snacks.

What Is First-Class on Domestic Flights?

On most domestic flights within the U.S., especially aboard airlines like Alaska, United, Delta, and American, first-class resembles the Premium Economy option on international routes. Early boarding, extra legroom, complimentary alcoholic beverages, enhanced meal options, and private first-class sections are all persuasive arguments for upgrading — particularly if traveling from coast to coast.

What Is Business Class?

While first-class is the dream, the seats offered in business class are also very comfortable, and some airlines blur the lines between the two. Delta’s Delta One and United’s Polaris seat options represent a super luxurious version of business class, with 180-degree flat beds, chef-curated meals, sommelier-selected beverages, and enhanced media entertainment. Meanwhile, American Airlines’ Business and Virgin Atlantic’s Premium classes each offer larger seats, in-seat power, premium alcoholic beverages, early booking and boarding, and the option of Wi-Fi on select flights. To top it off, passengers can enjoy all the fun of the airport premium lounge.

What Is First-Class on International Flights?

First-class fares on international flights offer the best of the best when it comes to airline seating. At this level, airlines provide a similar range of perks that include private airport lounges with spa services and pre- and post-flight buffets, 180-degree flat beds, fine-dining, priority baggage and boarding, enhanced entertainment, a huge degree of privacy, and of course, top-notch service. American’s Flagship First and Virgin’s Upper Class go above and beyond the business class options available with Delta and United (which retired its Global First offering in 2018), with chauffeur service and extra in-flight amenities like luxe skincare sets, slippers, and pajamas.