Approximately 325 miles southeast of Fort Lauderdale, Cat Island feels away from it all. This remote part of the Bahamas isn’t one you can reach easily via cruise ship or Airbus. In fact, getting here might require a prop plane. Although daily nonstop flights on larger airlines arrive in New Bight Airport (TBI) from Nassau and Fort Lauderdale, many opt to take a charter plane. You can also arrive via mailboat, but these ships tend to be sparse and slow.

For travelers who want to test the outer reaches of civilization while dipping their toes in turquoise water, the island’s seclusion is a great thing. Only about 150 square miles, with a population of just over 1,500 people, Cat Island is much less built up than other touristy areas of the Bahamas. Also, if you come looking for feral felines, you may be surprised to learn that the destination was named after Arthur Catt, a frequent visitor who was also a pirate and friend of Blackbeard. The first European settlers moved to Cat Island around 1783 -- loyalists hotfooting it from the American Revolution. Many of them built thriving cotton plantations, and the ruins of their mansions can still be found on the island’s wavy hills.

The temperature ranges between 60 and 90 degrees Fahrenheit year-round, with the summer months falling on the warmer side and winter dropping down to the lower end. You’ll want to be mindful of rainfall, which is relatively low from December to April and climbs up through the spring and summer, eventually peaking in October. Below, we put together a complete guide to Cat Island, including where to stay, what to do, when to visit, travel safety, and more.

Our Top Pick for Hotels on Cat Island, Bahamas 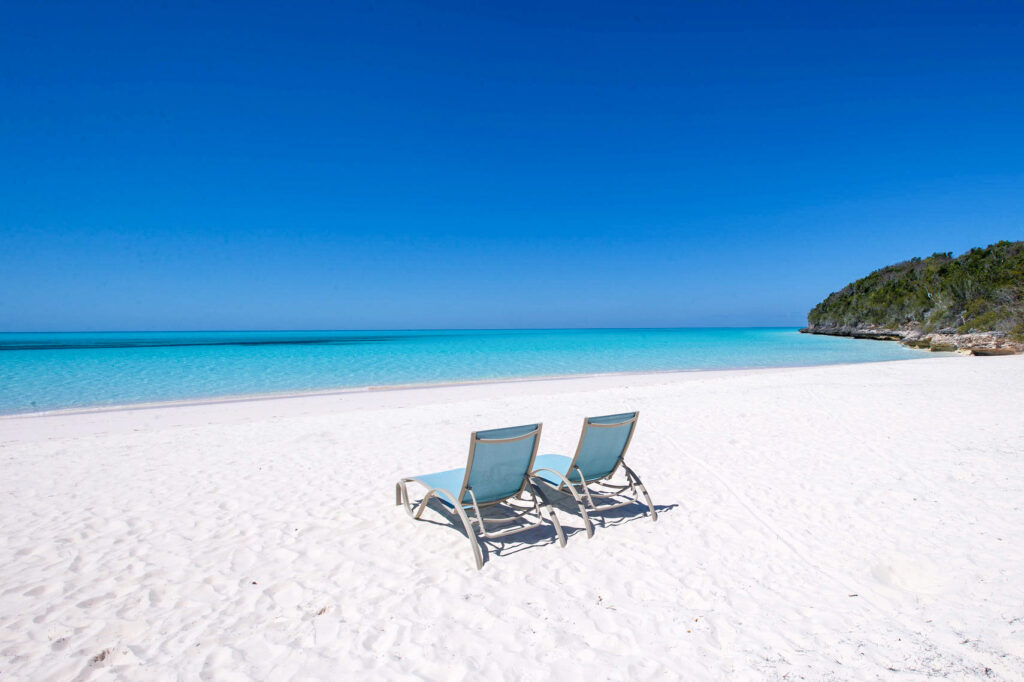 If you’re traveling to the Bahamas hoping to ride a large waterslide and rule the Blackjack table, you should opt for a family-friendly casino hotel in Nassau. However, many of Cat Island’s resorts seem more like bed-and-breakfasts than five-star luxury properties. Shannas Cove Resort is located up a dirt path and only has five freestanding bungalows. If you’re serious about stepping back from the bustle of the modern world, you may be relieved to find that the rooms here have no Wi-Fi. Most guests tend to be couples who want to enjoy the tucked-away beach, free kayaking, and fresh food. Shannas Cove also has one of the best restaurants on the island (try the pineapple and shrimp chicken). 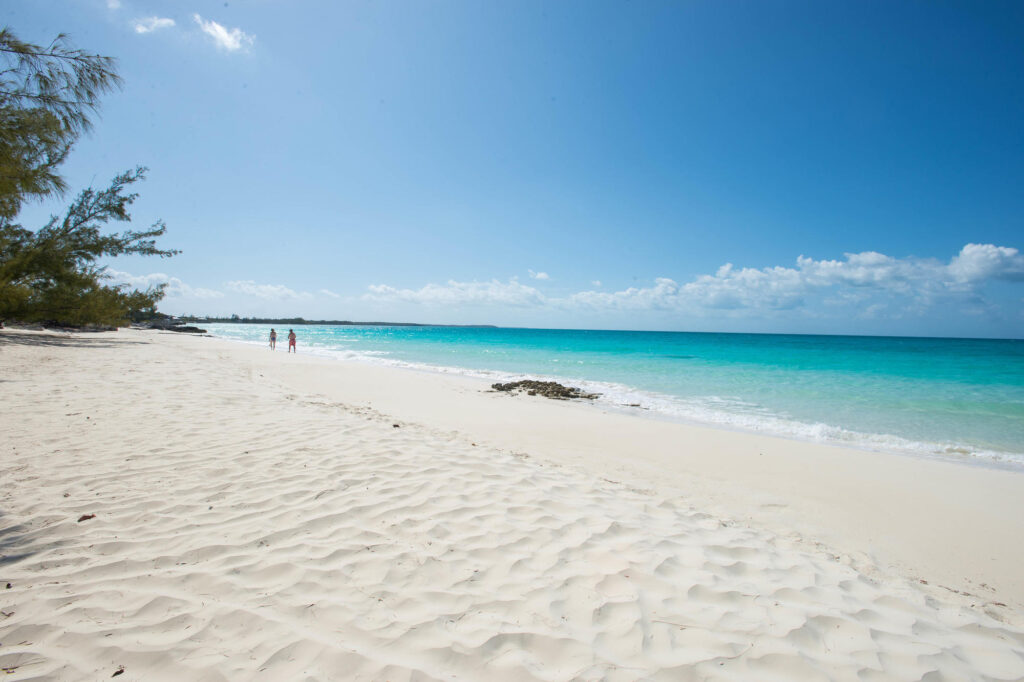 Pigeon Cay Beach Club, a more budget-friendly property, may be a better option for families. Like Shannas Cove, the powdery white sand on the nearby beach doesn’t get a lot of foot traffic. The resort’s seven rustic bungalows have no TV or Internet, but they do have full kitchens. Pigeon Cay also offers free bikes, kayaks, and snorkel gear, if you can successfully convince the kids to unplug and spend their free time appreciating the wonders of nature.

Note: Be mindful that several resorts close for a month in the fall due to the dip in travelers. For some, that decrease may also signal that it’s time to look for a bargain. 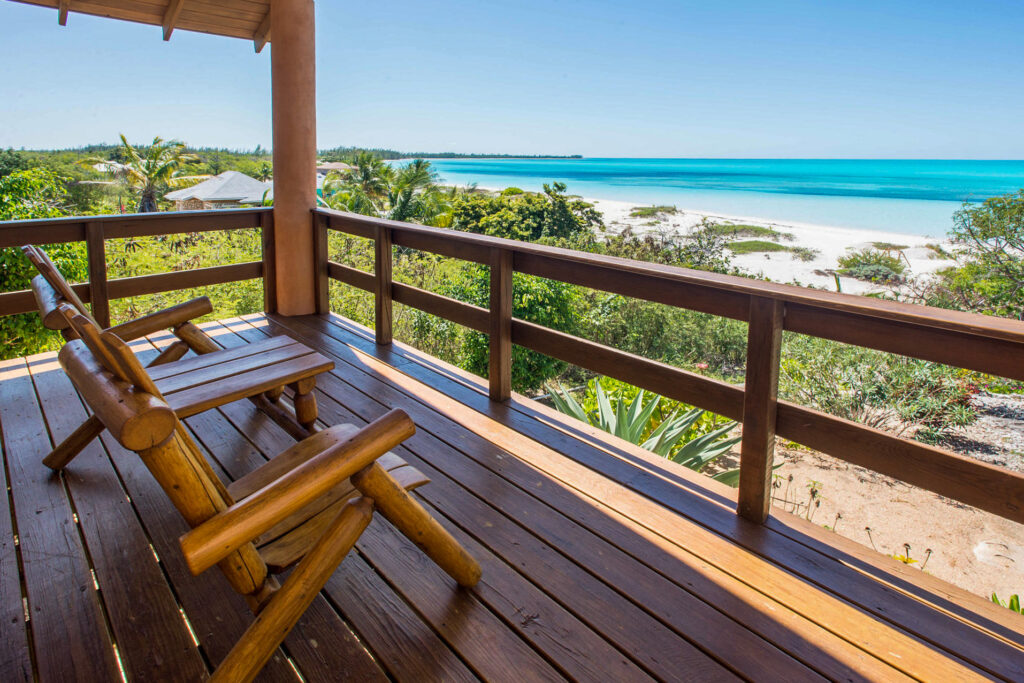 Cat Island’s year-round temperatures range from the 60s in the winter to the low 90s in the summer, so there’s no real bad time to visit. That being said, June to October is the rainy season, with the largest amount of precipitation in October. Humidity also rises during this time of year. Rain tends to come in periodic downpours, so there’s a good chance the entire day won’t be lost. If you decide to visit in June, be sure to check the dates for the annual Rake and Scrape Festival, which celebrates the Bahamas’ indigenous music, traditionally made with washboards and accordions, though the genre has expanded to include other sounds.

High season stretches from mid-December to mid-April, when hotel prices are at their highest. March and April are also when spring breakers make their way to the Bahamas, so don’t expect peace and quiet. Low season, which runs from mid-April to mid-December, is the best time to search for a better rate on hotel rooms. November can be an unexpectedly good time to stop by.

Best Things to Do on Cat Island 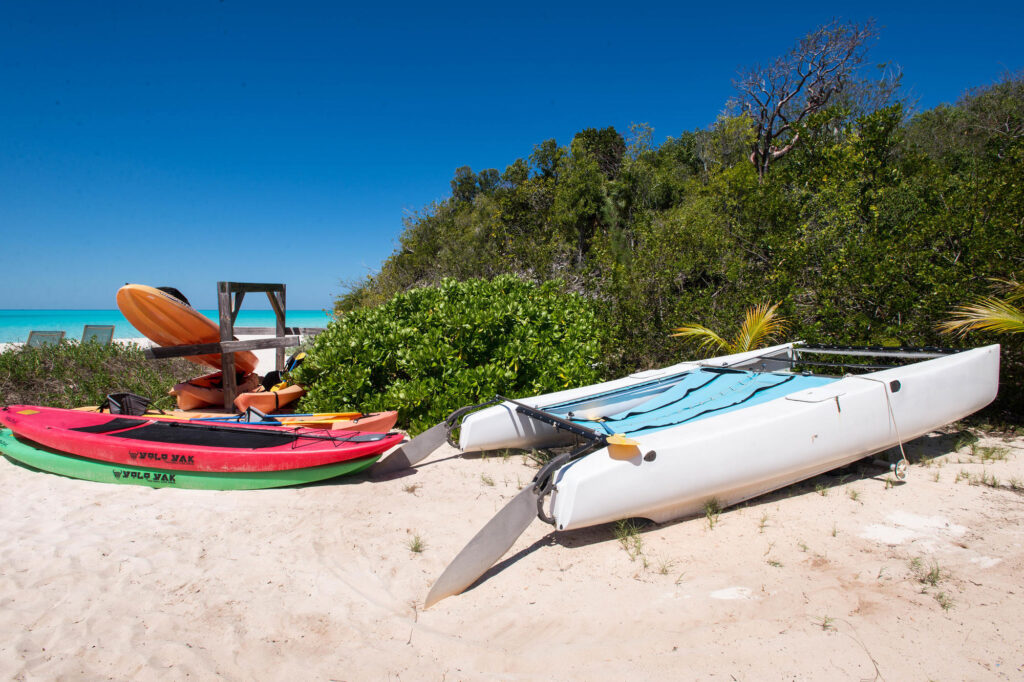 Chances are, you’re visiting Cat Island to decompress, so there’s no need to pack your day with activities. Spend some time coiled in a hammock, staring out into the waves or strolling along the eight miles of pink-sand beach. Visitors who want to get active can fish, swim, hike, and snorkel. Many locals describe Dean’s Blue Hole as the deepest blue hole in the world. The natural saltwater pool extends 663 feet down into the ocean, and also boasts the world’s second-largest underwater chamber. For those who don’t want to trek to the ocean’s depths, there are coral caves and tropical marine creatures to peep along the edge.

Bahamas Catamaran Charters organizes voyages to nearby islands and unspoiled cays for fly-fishing, snorkeling, and swimming. The island also boasts several hiking trails — namely, the walk up Mount Alvernia, the highest point in the Bahamas at 206 feet above sea level. The island’s history dates back a few centuries, and there are a handful of notable structures to investigate. At the top of Mount Alvernia’s Como Hill is the Hermitage, built by Roman Catholic priest Monsignor John Hawes. The stone, medieval-style monastery was created in 1939 as a place to pray and quietly reflect. The Deveaux Plantation Ruins offer up a relic of the island’s past — a time in which antebellum style mansions dotted the hills overseeing large fields of cotton, often worked by slave labor. Today, the building is just the shell of its former self, but still an interesting piece of history. Movie buffs will want to stop just outside Arthur’s Town to see where actor Sidney Poitier grew up. Visiting the area where he spent his formative years, which he once likened to a “garden,” will make his journey to Academy Award winner seem even more impressive.

Restaurants on Cat Island make the most of their location and focus on fresh ingredients. Da Smoke Pot, named after the Bahamian tradition of burning green brush to keep bugs away, is known for its seafood dishes such as conch salad. Sammy T’s serves up conch fritters for lunch and lobster and crab for dinner. Meanwhile, Da Pink Chicken is a colorful shack known for its distinctive drinks and walls, which are filled with signatures, wishes, and graffiti from previous customers. The tagline for this spot is “a good place to do nothin’,” which could also apply to the entire island. Keep in mind that it’s only open from 2 p.m. to 6 p.m., so plan your visit accordingly.

Things to Know Before Traveling to Cat Island 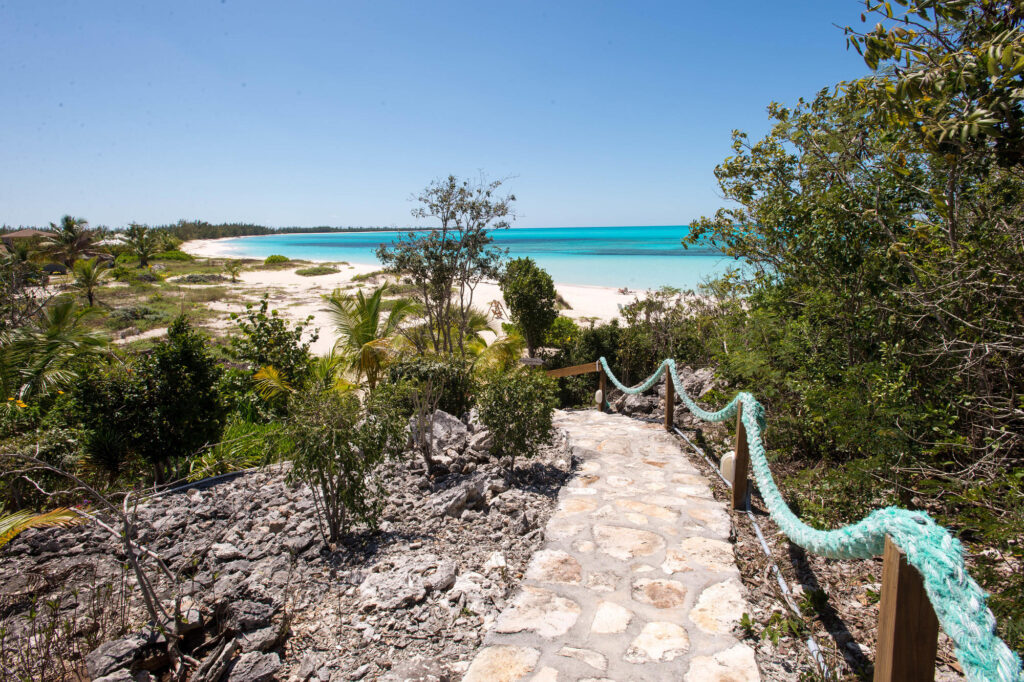 Much of Cat Island remains wonderfully underdeveloped, so if you want to trek its 48-mile expanse, you’ll likely need to hire or rent a car. Taxis are available from the airports. Rates are fixed by law and allow for surcharges if there are more than two customers on the ride. Like much of the United States, tips tend to be 15 percent. Drivers must be 21 or older to rent a vehicle. Also, remember that cars keep to the left hand side of the road.

Visitors need plenty of sunscreen (for obvious reasons) and mosquito repellent, since the rural parts of the island still have plenty of flying creatures.

Locals are known for their warm hospitality, so no need to be suspicious of everyone offering to walk with you to help you find a location. They’re just trying to be nice.

Is Cat Island Safe to Visit? 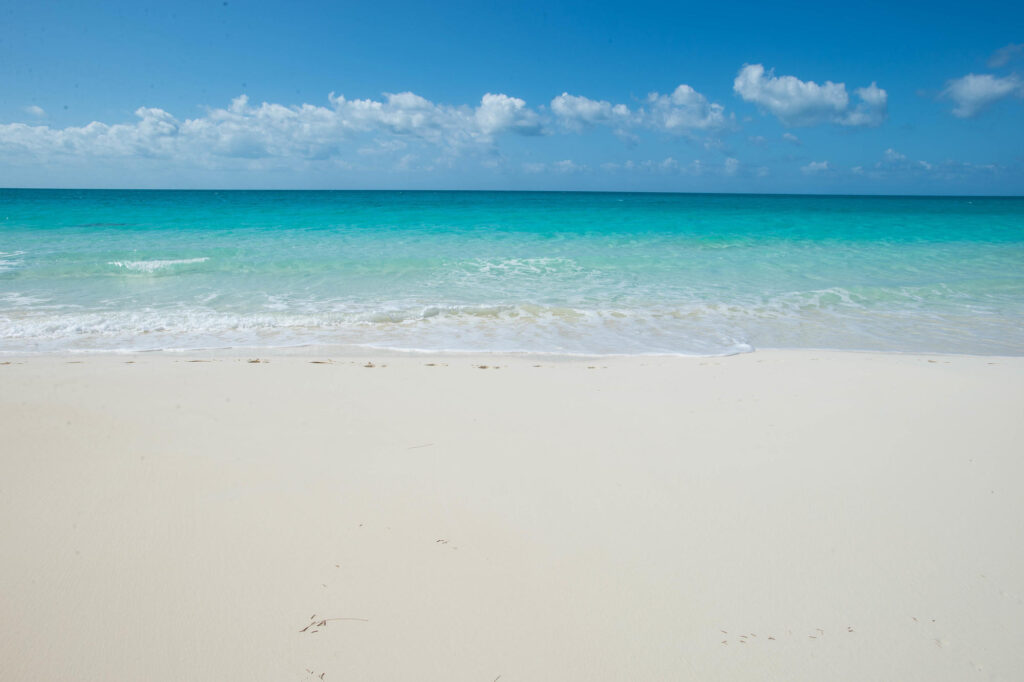 Reports of crime on Cat Island are few and far between, but it occasionally happens. There’s little need to fret about getting scammed, and since the island’s population is so small (about 1,500), it’s fairly easy to find potential suspects.

Hurricanes haven’t historically impacted Cat Island as much as other parts of the Bahamas, but the occasional storm, such as Hurricane Matthew in 2016, has landed. Storms that badly damage Nassau and other important parts of the island chain may also cause problems in Cat Island, since they can be food supply sources as well as important touchpoints for travel.