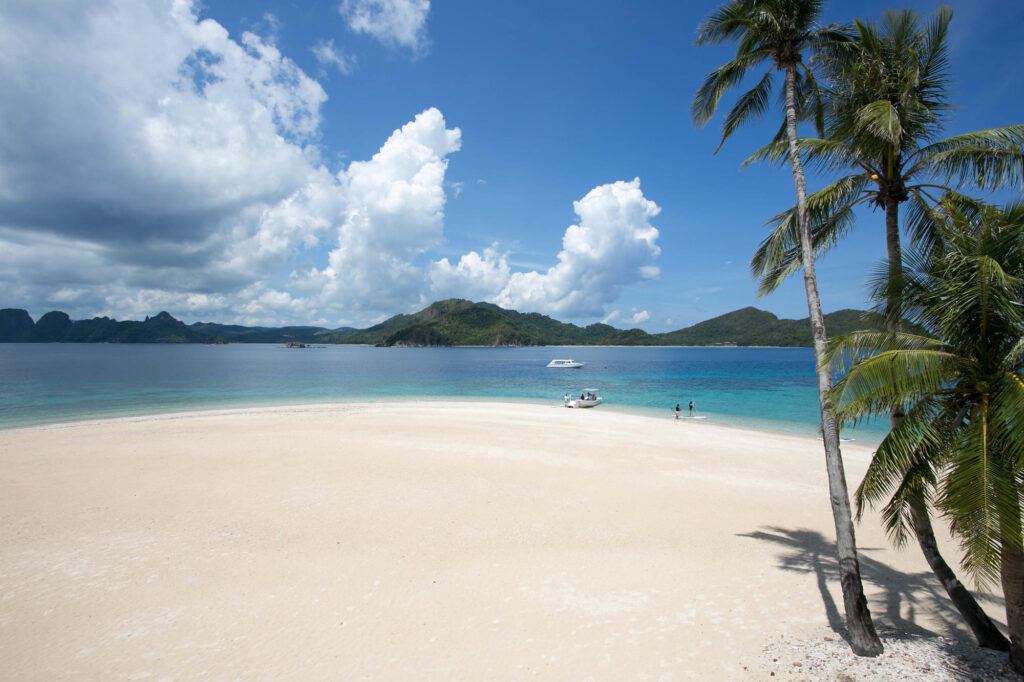 The most westerly province of the Philippines, Palawan is catching the attention of travelers with its incredible beauty and wealth of nature-based adventures. The province includes the main island of Palawan as well as a surrounding archipelago of approximately 1,780 islands and islets. Palawan’s topography is characterized by limestone cliffs and peaks, which are covered in dense jungle and fringed by white-sand beaches. It has evoked comparisons to Vietnam’s Halong Bay and the Thai Islands. While all three of these Southeast Asian destinations have extraordinary landscapes, Palawan certainly has the edge in terms of fewer crowds and under-the-radar appeal. Although tourist arrivals are projected to eclipse Boracay in the coming years, Palawan’s much larger size -- 5,790 square miles to Boracay’s meager four-square-mile land area -- means that plenty of beaches and islands will remain secluded and pristine. Read on to learn more about this Philippines destination, including where to stay, when to visit, and what to do while there.

Dry season in Palawan stretches from November through May. Understandably, this is the most popular time to visit the island, especially during December and January. To avoid the largest crowds, snag some deals on hotels, and still enjoy reliable weather, consider visiting in November or between March and May. If you can only take vacation during the summer, don’t fret. It often only rains for a brief part of the afternoon, giving you ample time to take advantage of the uncrowded beaches. 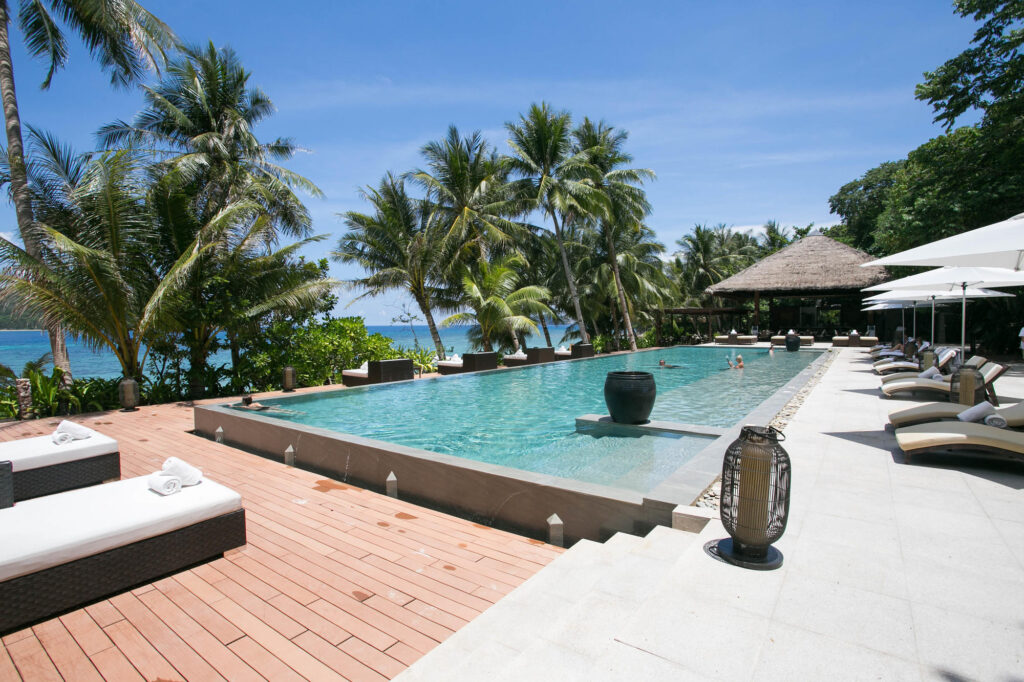 Set on a private island off northwestern Palawan, El Nido Resorts Pangulasian Island delivers luxurious comforts in a pristine natural setting. Guests can choose from a range of villa-style accommodations, including Pool Villas, which are set by the beach with private plunge pools, and stilted Canopy Villas enshrouded in lush jungle. In addition to active pursuits like sailing, snorkeling, and kayaking, the resort’s infinity pool and spa guarantee relaxation. 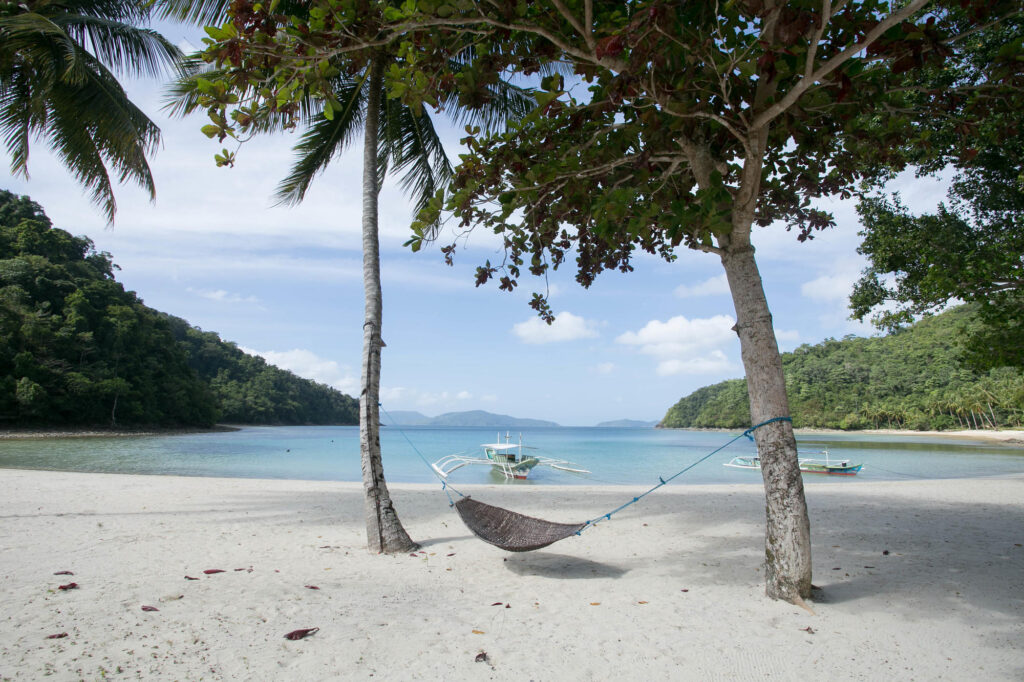 Located on a remote peninsula, Secret Paradise Resort & Turtle Sanctuary is the ultimate getaway for nature lovers. Accommodations come in the form of beachfront cabins with air-conditioning, balconies, and hammocks. Although the 172-acre property is a bit isolated, guests can fill their days with kayaking, snorkeling, and exploring the four private beaches. Reaching the secluded resort requires a one-hour boat ride from Port Barton.

Our Top Pick for a Kid-Friendly Hotel in Palawan: Daluyon Beach and Mountain Resort 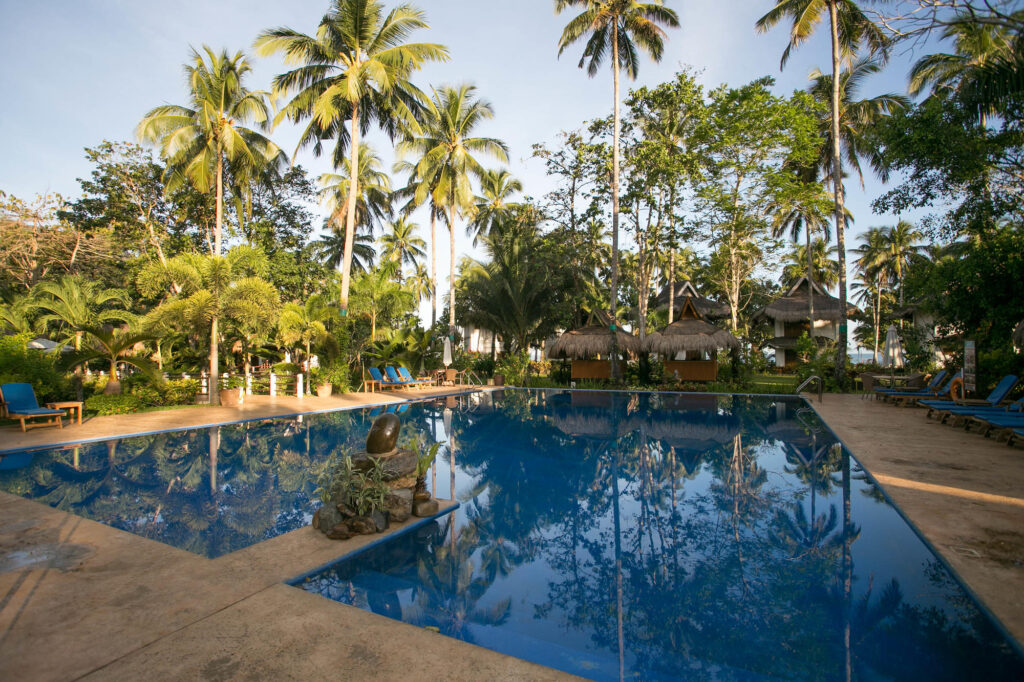 Pool at the Daluyon Beach and Mountain Resort/Oyster

With a beachside location and amenities like a kids’ pool, game room, and volleyball courts, Daluyon Beach and Mountain Resort is a top choice for families traveling with kids. The property is also within walking distance of thrilling activities, including as zip-lining and mangrove forest boat tours. 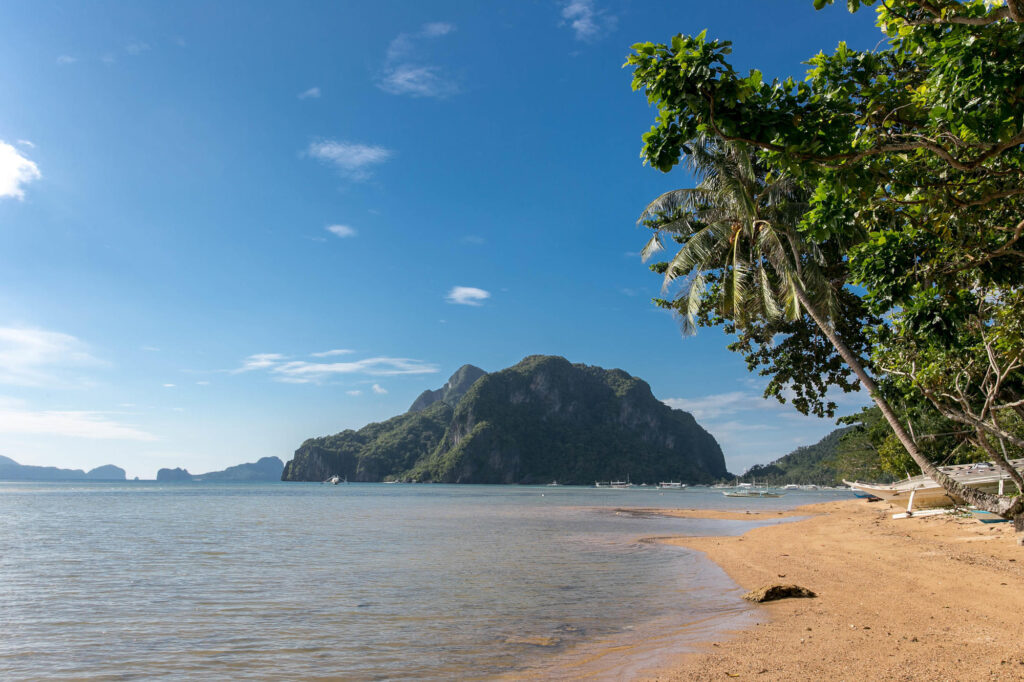 El Nido Four Seasons Resort offers solid amenities — a pool with ocean views, beach access, free breakfast, and sea kayaks — all for a value. While the property enjoys a quiet beachside setting, downtown El Nido is a mere five minutes away by car or tricycle.

Best Things to Do in Palawan 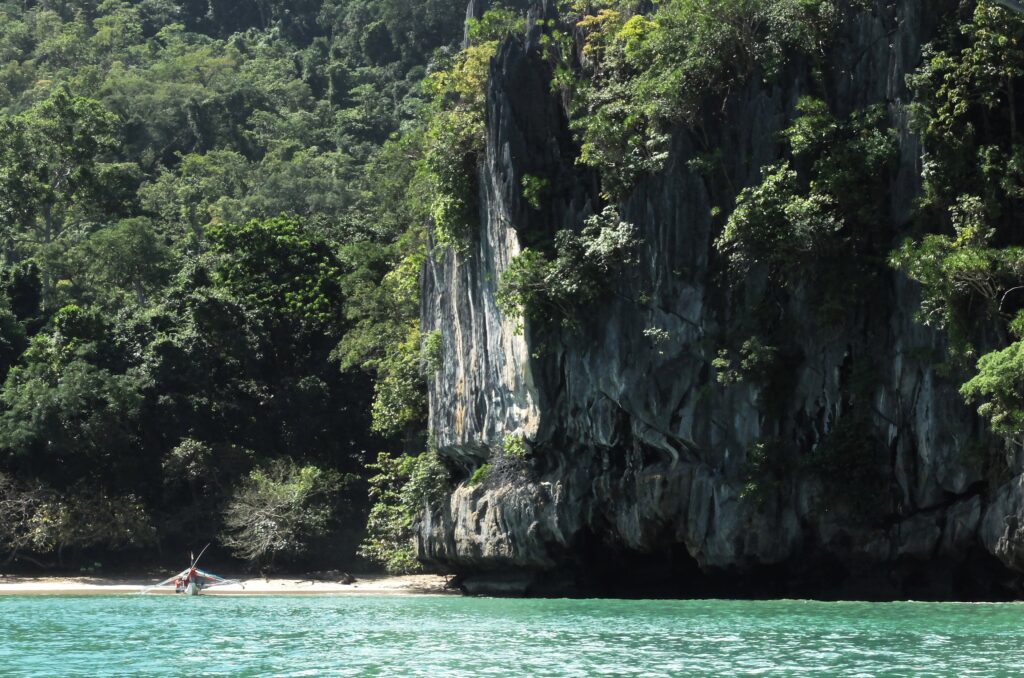 This UNESCO World Heritage site features a five-mile underground river, which meanders through an extensive limestone cave system before emptying out into the turquoise South China Sea. Most tours enter the seaside cavern in small group paddleboats or kayaks to explore the first mile of the river. Venturing farther into the cave is possible with a special permit from the National Park Office in Puerto Princesa. Keep in mind that this permit must be purchased at least two days before your trip. The river’s eroding effect on the limestone cavern has created remarkable formations, while the surrounding topography and forest provides habitat to numerous species, including bats, crabs, and monkeys. To explore the surrounding old-growth forest (and save some pesos on boat fare), opt for the three-mile Jungle Trail from Sabang to the cave entrance, where tour boats await. Otherwise, visitors can hop on a boat from the wharf in Sabang, but be sure to stop by the information office to purchase a permit to enter the caves.

Palawan’s extraordinary natural beauty continues into its underwater depths. The Calamian Islands, located just off Palawan’s northern coast, are home to some of the best and most accessible diving opportunities in the region. Coron Island is surrounded by numerous wreck sites from sunken Japanese ships during World War II. An oil tanker, known as Okikawa Maru, is the largest of the wreck sites. West of El Nido in Bacuit Bay, Miniloc Island boasts vibrant coral reefs and calm conditions, making it a top choice for beginner and intermediate divers. The island’s second UNESCO World Heritage site, Tubbataha Reef National Marine Park, encompasses 97,030 hectares in the Sulu Sea and some of the world’s premier dive sites. Tubbataha’s atolls and deep channel serve as a habitat for hundreds of fish species, sea turtles, whale sharks, dolphins, and whales. However, given that it’s roughly 100 miles from Puerto Princesa, this reef is typically visited as part of a multi-day package with liveaboard accommodations. 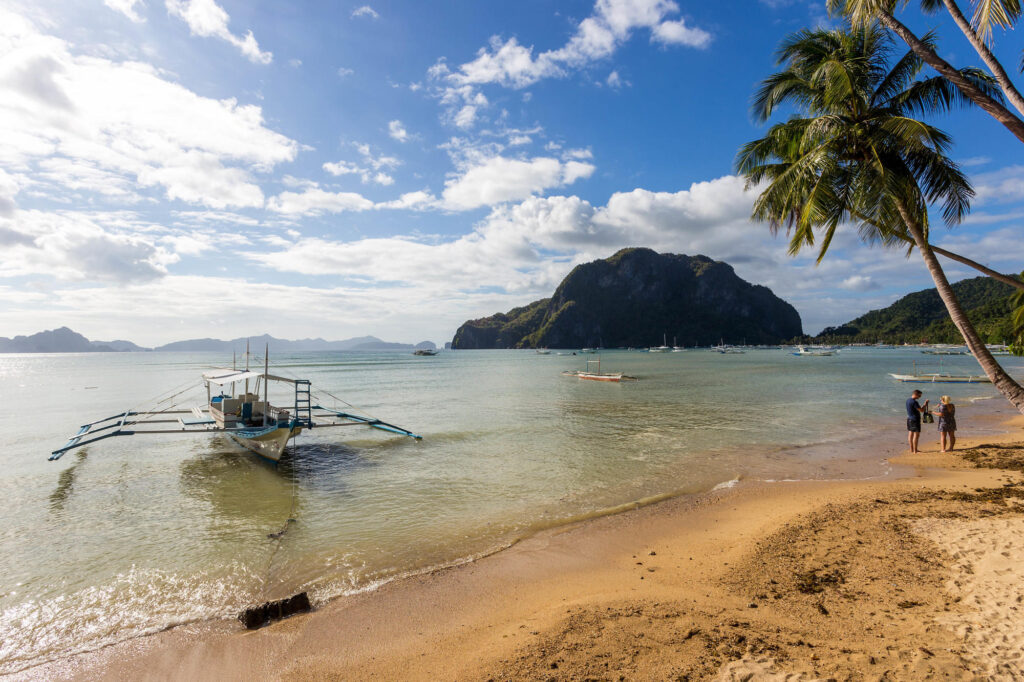 The islands off of northern Palawan are best suited for island hopping. Group and private tours depart daily from El Nido and explore Bacuit Bay, which holds dozens of islands with hidden coves and beaches. Noteworthy stops include the Secret Lagoon on Miniloc Island and the cliff-ringed beach on Shimizu Island. There are plenty of reefs for snorkeling as well. The Cadlao Lagoon’s shallow reefs and Tapiutan Strait’s walls offer some of the best snorkeling in the bay. Matinloc Island, which forms the eastern boundary of the Tapiutan Strait, is also home to Secret Beach — a sliver of sand that can only be reached by swimming through a limestone rock face. Longer excursions to visit Linapacan Island, Busuanga, and the Calamian Islands are also possible from El Nido. Unspoiled beaches and coral reefs abound in these parts, too.

While most visitors are drawn to Palawan for its exquisite beaches, scuba diving, and other water sports, the island’s rugged interior has plenty of trails through dense jungle and up mountain peaks. The refreshing pool below Nagkalit-kalit Waterfall outside El Nido Town can be reached via a short tricycle ride and one-and-a-half-hour round-trip hike. For a more tactical hike, take the El Nido Canopy Walk to the 750-foot summit of Taraw Cliff. The recently opened trail includes a 250-foot suspension bridge and several ladders to traverse the jagged limestone terrain. Efforts are rewarded with stunning views of Bacuit Bay. Multi-day treks can be arranged as well. Palawan’s highest peak, Mount Mantalingajan, rises over 6,800 feet on the island’s southern end. Guided treks to reach the summit usually last four to five days, as it’s necessary to conquer several smaller peaks on the way from the coastal town of Rizal. If you’re up for the challenge, the journey takes in waterfalls, various forest ecosystems, and villages where the indigenous Tau’t Bato live. 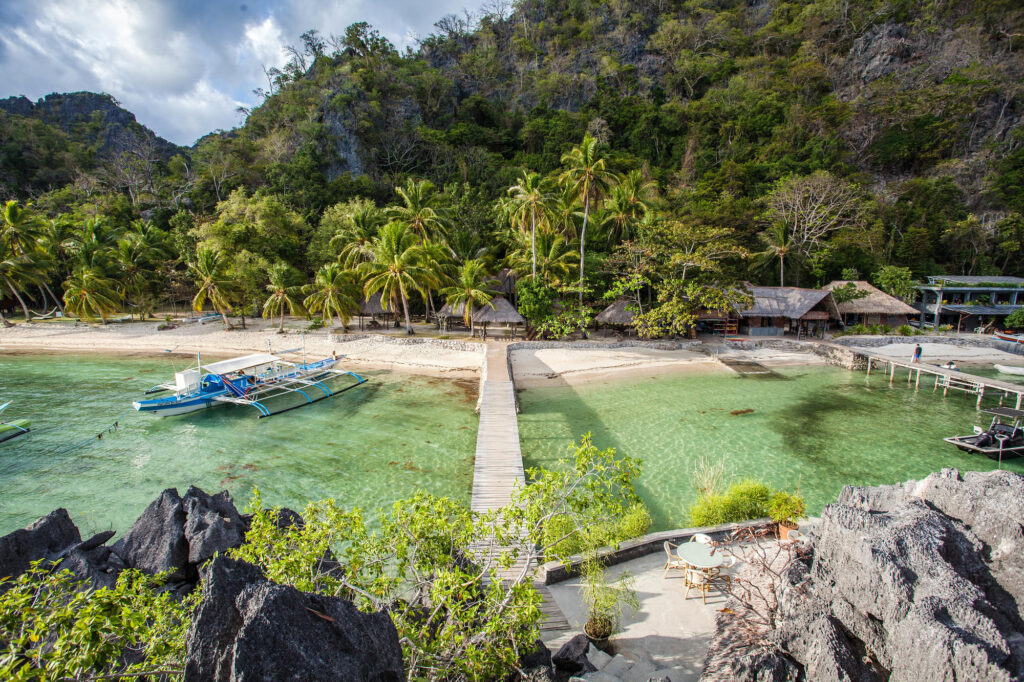 The 2017 opening of new airports in San Vicente and Puerto Princesa has made reaching Palawan much easier. Puerto Princesa can be reached via Philippine Airlines, Cebu Pacific, and AirAsia domestically, while Tigerair Taiwan operates flights from Taipei. Short connecting flights from Manila to San Vicente with SkyJet Airlines allow visitors to forgo the three-hour drive from Puerta Princesa. Additionally, the El Nido Airport in the north can be accessed with charter propeller planes.

Our Favorite Gear for the Philippines