The Italian island of Sardinia is home to beautiful beaches that resemble the stretches in the Caribbean or South Pacific more than its European neighbors. Seemingly countless bays and coves conceal secluded shores, while historic villages and ancient ruins dot the interior. Sardinia’s Mediterranean climate allows for a lengthy beach season, and with 1,150 miles of coastline, there are plenty of alluring options to choose from. Whether your version of fun in the sun includes an umbrella and lounge chair or traversing granite boulders, one (or more) of these Sardinia beaches is right for you. 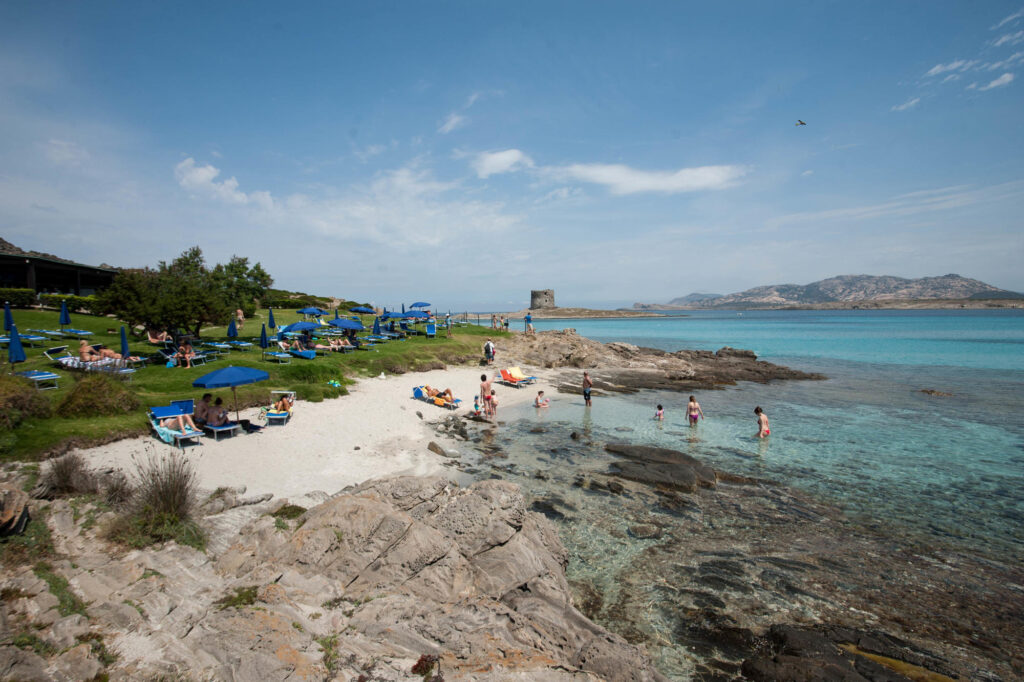 Located just outside the resort town of Stintino, on Sardinia’s remote northwestern tip, Spiaggia della Pelosa offers the whole beach package: powdery white sand, shallow turquoise water, laid-back beach bars, and a wide selection of water sports and excursions. The offshore islands of Isola Piana and Isola della Pelosa provide a scenic backdrop, which includes a craggy coast and the ruins of a Spanish watch tower. These islands also shelter the beach to create excellent swimming conditions and visibility. Windsurfing and kayaking are popular, while diving excursions depart from here to nearby Asinara Island. The beach’s magnificence hasn’t gone unnoticed, however, so expect plenty of company when visiting during July and August. Fortunately, the shoulder months of June and September enjoy comparable weather with significantly less crowds.

Our Pick for a Hotel Near Spiaggia della Pelosa: Residence Hotel La Pelosetta

Situated a mere few hundred feet from Spiaggia della Pelosa, the Residence Hotel La Pelosetta is a budget-friendly option that allows guests to take full advantage of the stunning shoreline.

This extremely picturesque stretch of white sand occupies a calm harbor in Santa Teresa di Gallura on Sardinia’s northernmost tip. The local history and dialect is deeply entwined with the French island of Corsica, which lies less than 20 kilometers to the north. Spiaggia Rena Bianca possesses some of the calmest, shallowest water on Sardinia, making it an ideal destination for families with kids. Hiking trails ascend the rocky terrain at the beach’s eastern and western ends. The eastern trail ambles between granite boulders on its way to a Spanish round tower and observation deck, while the western trail takes in archaeological sites on its way to the weathered rock formations at Capo Testa.

Our Pick for a Hotel Near Spiaggia Rena Bianca: Grand Hotel Corallaro

The Grand Hotel Corallaro grants Mediterranean views from its terraces and sizable on-site pool. Also, the property is ideally set midway between Spiaggia Rena Bianca and the town center. 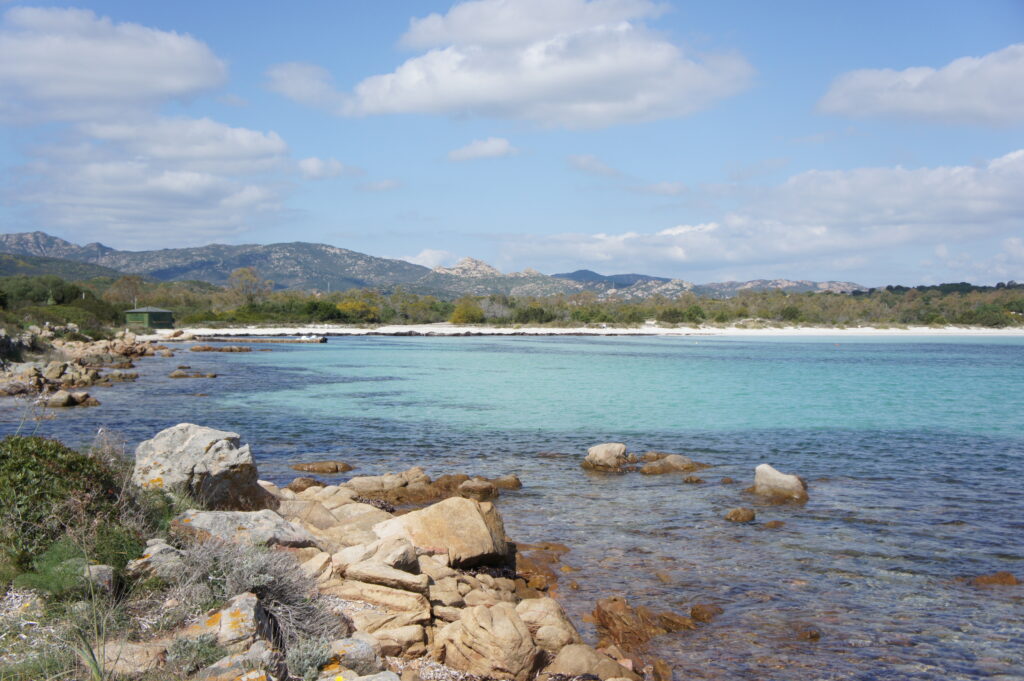 Northeastern Sardinia boasts many swaths of idyllic sand, and Cala Brandinchi is perhaps its most serene. The crescent-shaped beach is encircled by pine forest and sand dunes, while the bay hardly sees a wave disrupt the crystal-clear water. Just offshore, snorkelers can spot schools of fish among underwater rock formations. Farther south, Stagno di San Teodoro provides a marshy habitat for flamingos, egrets, and other bird species. Beyond Cala Brandinchi, the nearby beaches at La Cinta and Lu Impostu merit a visit as well.

Our Pick for a Hotel Near Cala Brandinchi: Residence Baia Salinedda

Residence Baia Salinedda is just a few kilometers from Cala Brandinchi and a five-minute walk from some lesser-known attractive, but still attractive, beaches. Jutting out into the Mediterranean, on Sardinia’s southeastern coast, Punta Molentis shelters this sandy cove from wind and surf for a truly relaxing beach experience. The small peninsula derives its name from the donkeys used to haul granite from the once-active quarry. Today, beachgoers will notice shimmering streaks of pink along the coastline, especially at sunset. For sweeping views, head to the nuraghe — a type of ancient round tower found across Sardinia. Unfortunately, the relatively small beach becomes packed during the summer months, so it’s advisable to get there first thing in the morning to secure a beach chair. Alternatively, plan your trip during the off-season.

Our Pick for a Hotel Near Punta Molentis: Hotel Simius Playa

The Hotel Simius Playa is well-situated for beach-hopping between Punta Molentis and its neighboring coves.

Though technically not on the island of Sardinia, Cala Serena is nestled in a secluded cove on Caprera, a neighboring island in the naturally stunning Arcipelago di La Maddalena. Despite the island’s small size, it has seen some notable history, including Napoleon’s first (and incredibly unsuccessful) military combat and the imprisonment of Mussolini. It also served as the residence of the revolutionary Giuseppe Garibaldi. Today, the entire archipelago and surrounding sea is jointly protected as a national park by Italy and France. Thus, development on Caprera is limited beyond a handful of cafes, museums, and the bridge connecting to Isola Maddalena. Cala Serena is particularly off-the-grid, and can only be reached by boat or on foot from Cala Garibaldi. This arc of white sand, surrounded by rocky cliffs and maquis shrubs, is well worth the added effort.

Our Pick for a Hotel Near Cala Serena: La Vecchia Fonte Hotel

Across the channel on mainland Sardinia, the elegant La Vecchia Fonte Hotel is conveniently positioned in the charming town of Palau near the ferry to Isola Maddalena.

Caprera is gifted with several jaw-dropping beaches. Located on the island’s east coast, Cala Coticcio contends with Cala Serena’s naturally beautiful setting. To get to this isolated cove, you can hike one-and-a-half kilometers from the road or join a boat tour from either Palau or La Maddalena. Shielded by a small peninsula, the turquoise water feels more like a pool than the Mediterranean Sea. There are no facilities here, so pack provisions to allow for a full day of sunbathing, swimming, and soaking in the scenery.

The white-quartz sand of Is Arutas was long sought-after for designing aquariums. Today, however, this arc of sand on Sardinia’s west coast is protected as part of a nature reserve. Visitors may still access the beach and scamper over the craggy rocks on the north side to Punta Su Bardoni, but taking any of the coveted quartz sand is prohibited. Here, the Mediterranean is incredibly inviting for swimmers and snorkelers with clear, turquoise water. Families with kids should be cautious, though, as the seabed gets deep quickly compared to other beaches on this list. Seven kilometers offshore, Isola di Mal di Ventre, which translates to “island of stomach aches,” can be visited by boat for more swimming and snorkeling. Is Arutas is far removed from any major town, but it’s still popular with day-trippers.

Our Pick for a Hotel Near Is Arutas: Is Arenas Resort

The luxurious Is Arenas Resort, which sits to the north of Is Arutas, offers a golf course, lovely pool, relaxing spa, and easy beach access.

Pricing for Is Arenas Resort 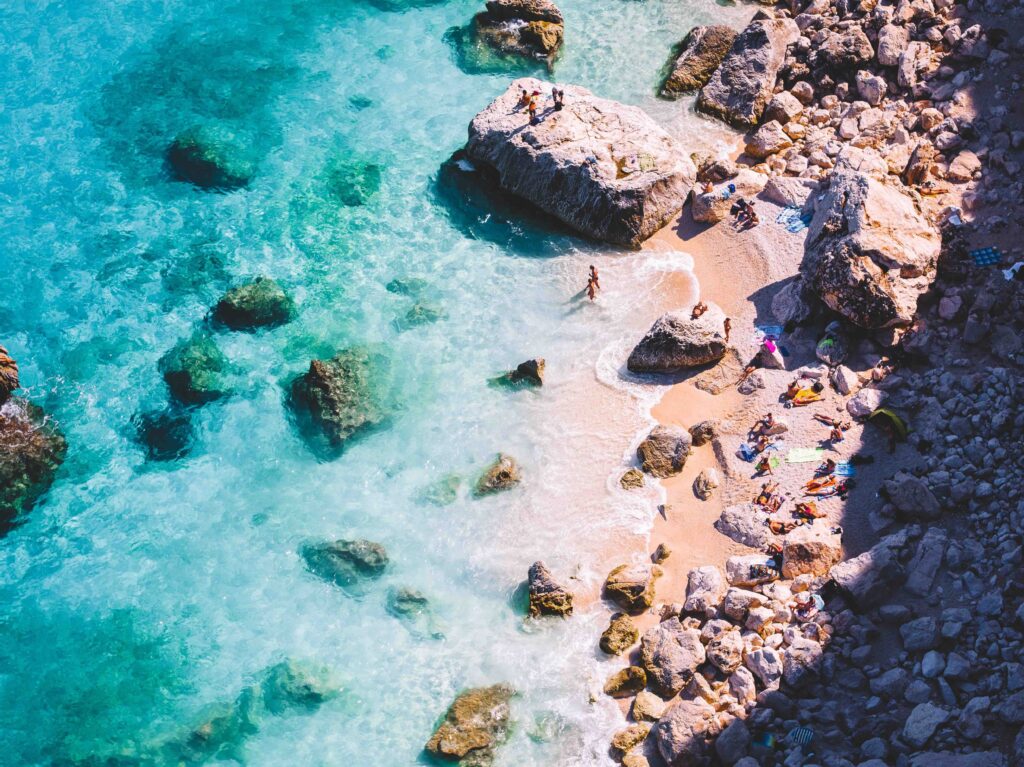 This remarkable white-sand and pebble beach on Sardinia’s eastern coast can only be accessed on foot since boats are prohibited from docking in this protected area. Trekking the three-and-a-half-kilometer path from the village of Altopiano del Golgo offers numerous vantage points of the picturesque bay and surrounding landscape. Be mindful of uneven terrain, as well as friendly goats and donkeys grazing on the path. It’s hard to miss the striking Aguglia rock, which towers over Cala Goloritzé at nearly 500 feet. Unless you’re an experienced rock-climber, it’s best to admire the pinnacle from the comfort of the beach. The beach itself has absolutely no facilities, so visitors should come prepared and remember to carry out their waste.

Spiaggia di Li Cossi more than compensates for its modest size with its unique setting. Gorgeous pink-granite cliffs and the snaking Li Cossi river enclose the 80-meter beach. During the summer months, the river produces just a trickle over the fine sand. The granite extends out into the shimmering sea, creating ideal swimming conditions in the shallow bay, as well as great snorkeling and cliff jumping farther out. The beach faces due west from its point on Sardinia’s norther coast, which also makes it a perfect spot to take in sunset views. The sheltered bay can be reached by a well-maintained coastal trail that connects Spiaggia di Tinnari in the south with the buzzing resort town of Costa Paradiso in the north. The distance to Costa Paradiso is a mere kilometer, with superb coastal scenery along the way.

The Residence Tanca Della Torre is tucked in the quaint seaside village of Isola Rossa. This is an advantageous location to explore the coast, including Spiaggia di Li Cossi. 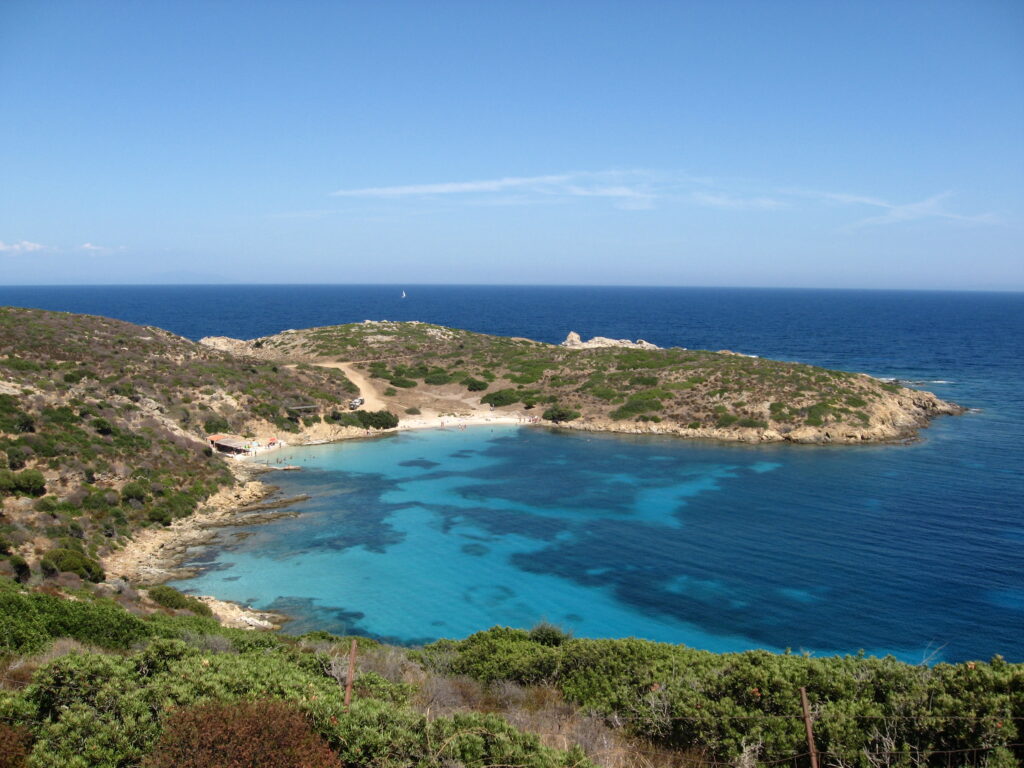 Set on a small cove in Asinara National Park, this white-sand beach is about as remote as it gets in Sardinia. The park, which derives its name from the local herd of albino donkeys, encompasses the entirety of uninhabited Isola dell’Asinara — Sardinia’s second-largest island. Before its designation as a national park, the island housed a prison complex for Italy’s most infamous Mafia criminals. Today, Asinara welcomes visitors wanting to windsurf, snorkel, and explore its deserted beaches. Cala Sabina sits on Asinara’s northeastern shores — a significant distance from any of the marinas. Luckily, a local shuttle drops off visitors at the nearby village of Cala d’Oliva. From there, it’s approximately two kilometers on foot to pristine Cala Sabina. During the summer, Cala Sabina is a welcome oasis from the more crowded beaches on the main island. Asinara is most easily accessed by boat from the ports of Stintino and Porto Torres.