The tiny nation of Denmark often makes headlines as one of the happiest countries on earth. The Danish refer to this blissful state as hygge, which translates to a feeling of coziness, conviviality, and contentment. In addition to its welcoming atmosphere, Denmark is a leading force in modern design, fashion, and cuisine, even among its Scandinavian neighbors. At the same time, the Danes celebrate and seek to preserve their traditional heritage and historical attractions. Overall, Denmark is a world-class destination with something to offer any style of traveler. Read on for our picks of the best places to visit in Denmark, and start your travel planning. 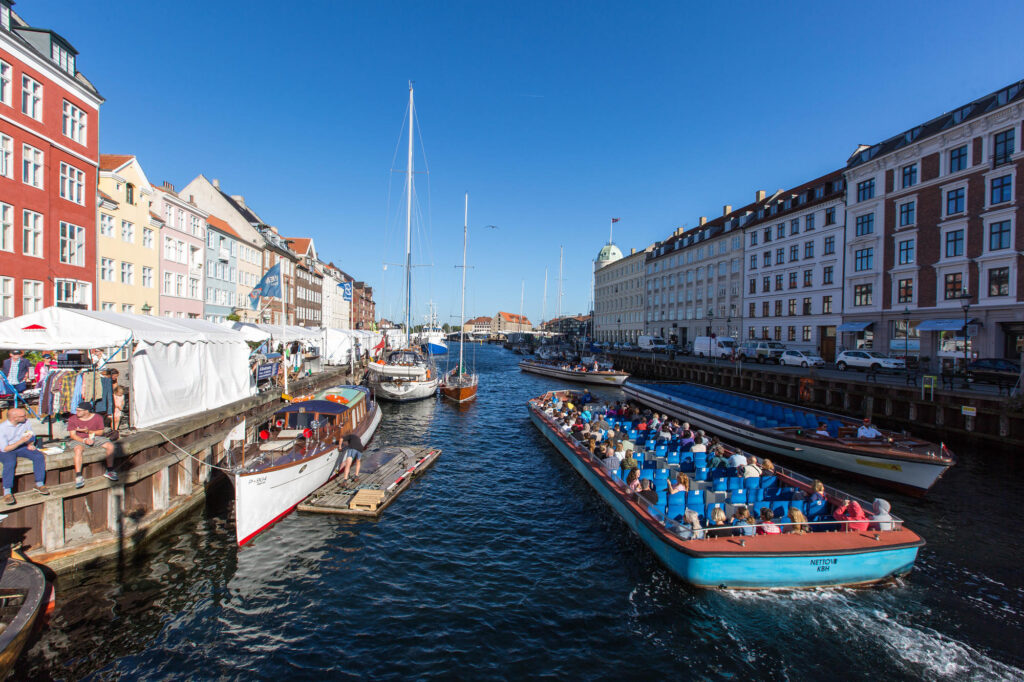 Denmark’s capital, Copenhagen, draws millions of visitors for its mix of old-world charm and understated modern intelligence in a navigable, welcoming urban environment. The city’s popularity has produced some overhyped and crowded attractions, like the Little Mermaid statue and the overpriced cafés along Nyhavn canal. However, the remainder of the city promises a wealth of experiences that can easily fill a weeklong visit. Copenhagen serves as the seat of the Danish Monarchy, with several royal sites open to the public. Visitors can tour the current royal residence at Amalienborg Palace, Rosenborg Castle and its crown jewels collection, as well as the King’s Garden. Just a couple of kilometers away, the self-governing district of Christiania stands in stark contrast to the monarchy’s opulence. Christiania is known for its bohemian cafés, music venues, striking street art, and prevalence of cannabis in a laid-back, yet defiantly alternative, atmosphere. Copenhagen’s art scene is thriving as well, with world-renowned collections at the National Gallery of Denmark and the Louisiana Museum of Modern Art, just outside the city, not to mention various independent galleries around the city. The Danish capital has become a culinary mecca with 17 Michelin-starred restaurants operating in 2019. That being said, more affordable delicacies abound, such as the artisanal offerings at Torvehallerne food market or smørrebrød at any corner café. A trip to Copenhagen wouldn’t be complete without paying a visit to Tivoli Gardens, especially during December when the amusement park transforms into a Christmas wonderland. Though the metro is a handy way to travel to and from the airport, the city itself is best explored by bicycle, as demonstrated by 400 kilometers of separated bike lanes.

Our Pick for a Hotel in Denmark: 71 Nyhavn Hotel

The stylish 71 Nyhavn Hotel enjoys a waterfront location at the quiet end of the Nyhavn canal.  Also, the property is in short walking distance of Copenhagen’s top attractions, such as Amalienborg Palace. 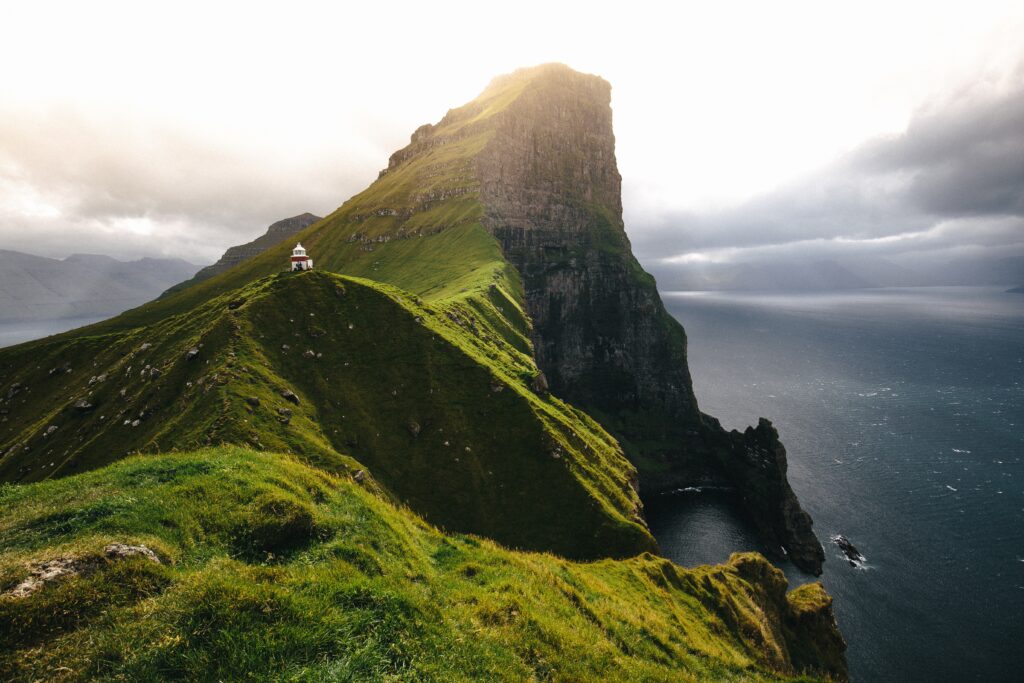 Located roughly halfway between Scotland and Iceland in the North Atlantic, the Faroe Islands cover 18 ruggedly beautiful islands. The archipelago functions as an autonomous country of the Kingdom of Denmark, but maintains its own unique language and culture. Most visitors arrive via Atlantic Airways, which operates daily flights from Copenhagen, as multi-day ferry connections are the only alternative. Upon landing at Vágar Airport, we recommended renting your own car to explore the sparsely populated archipelago and its imposing terrain. Six of the main islands are connected by sea tunnels and bridges, while the rest can be reached by ferry. Although driving the coastal road grants plenty of scenic views, it’s worth venturing out on the extensive hiking trails to access the most dramatic landscapes. Just miles from the airport, a short trail leads to Gásadalur waterfall, which plunges from rock cliffs into the Atlantic. Other scenic treks include the fjord at Saksun, the Kalsoy lighthouse, and the cliffs at Sørvágsvatn. Meanwhile, the westerly island of Mykines hosts a thriving puffin community, while southerly Sandoy boasts black-sand beaches and bucolic fishing villages. The Faroese capital, Tórshavn, merits a stop as well for its traditional grass-roofed homes, innovative restaurant scene, and chic designers like Gudrun & Gudrun. 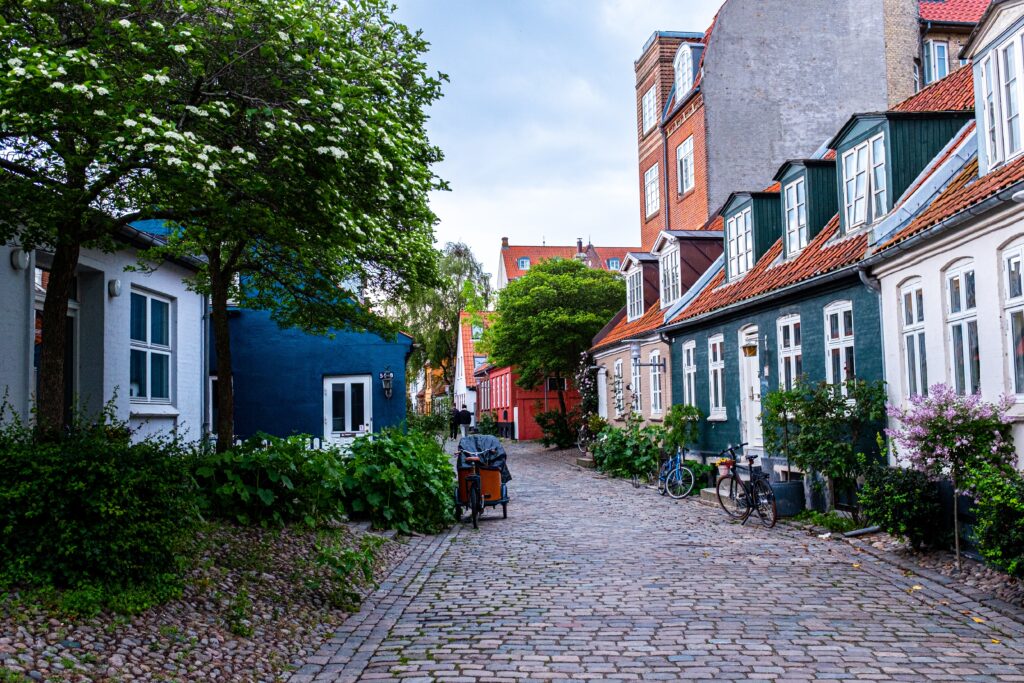 Denmark’s second-largest city is quickly gaining recognition as one of Scandinavia’s hipper locales following its 2017 reign as the European Capital of Culture. Design and architecture buffs have a lengthy itinerary of museums and galleries in store. Housed in a massive nine-story brick structure, the ARos Aarhus Kunstmuseum packs in a multitude of exhibits on Danish modernism and contemporary art. Still, the wraparound rooftop walkway — the Your Rainbow Panorama — steals the show with its series of glass panels featuring all shades of the rainbow. Another architectural gem — Isbjerget — constitutes a residential building resembling an iceberg in the harborside Docklands neighborhood. The steep, slanting structure is not only exceptionally stunning, but prioritizes livability for its residents with plentiful terraces and balconies. Other must-sees include the Dokk1 cultural center and the Moesgaard Museum. The city’s creativity extends to culinary arts as well, especially in the Frederiksbjerg neighborhood. Try Restaurant Hærværk, known for incorporating seasonal ingredients on its unfixed menu, or St. Pauls Apothek, which serves up signature cocktails and new Danish cuisine. Aarhus is rounded out by a wealth of charming, historical attractions, too. The open-air Den Gamle By museum comprises more than 70 timber homes, which were sourced from around Denmark to replicate a market town evocative of a Hans Christian Andersen fairy tale. For the full effect, time your visit with a reenactment performance with traditional costumes. Strolling through Aarhus’s Old Town provides another time warp, especially along the Møllestien’s cobblestone streets.

Located east of mainland Denmark in the Baltic Sea, Bornholm is actually closer to Sweden, Germany, and Poland than it is to the rest of Denmark. Bornholm can be reached via a 35-minute flight from Copenhagen or by traveling to the Swedish city of Ystad by train to catch the one-and-a-half-hour ferry to the island. Despite the distance, the island is popular with Danes for its pristine nature, arts community, and consistently sunny weather — a rarity in Scandinavia. Bornholm’s coast holds expansive white-sand beaches, fishing villages, and the scenically crumbling ruins of Hammershus Castle. The island’s interior is defined by forests, lakes, and round churches. For a more cultured scene, the coastal towns of Svaneke and Rønne are known for their galleries, craft markets, and smokehouses. Bornholm’s Michelin-starred restaurant, Kadeau, is perched on the island’s southern shores and draws foodies for its innovative take on Nordic cuisine and foraged ingredients. Even further east of Bornholm, the tiny island of Christiansø and its stunning 17th-century fortress tempt visitors with its solitude and ruggedly picturesque landscapes. Traveling to Christiansø takes approximately an hour by sailboat from Bornholm.

Located in northern Jutland, Aalborg has emerged from its industrial past as a modern art and cultural hub. This transformation is most apparent at the city’s Limfjord waterfront. Aalborg’s former electric plant was converted into Nordkraft, a dynamic cultural center containing a music venue, theater, cinema, gallery, and other multipurpose spaces. Nearby sits the Utzon Center, renowned for its modern design and architecture exhibits. The sleek, contemporary structure was designed by Aalborg-born architect Jørn Utzon, who is best known for conceiving Sydney’s Opera House. The Musikkens Hus concert hall is another noteworthy spot, where the Aalborg Symphony Orchestra and visiting performers play. The Kunsten Museum of Modern Art furthers Aalborg’s design prowess, encompassing galleries, a sculpture park, and the Aalborg Tower. The city’s history is on full display as well, most notably at the 16th-century Aalborg Castle and Budolfi Cathedral. 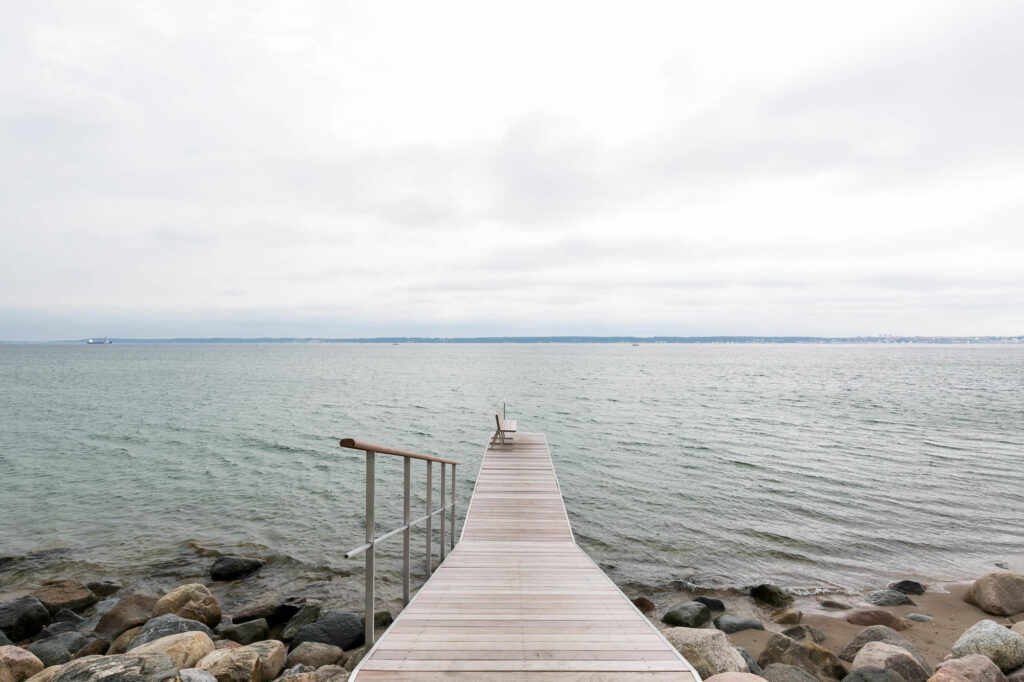 Beach at the Beach Hotel Marienlyst/Oyster

This medieval town rose to prominence in the Middle Ages, due to its strategic location at the narrowest point of the sound between Sweden, known as the Øresund. A short stroll through the town center promises quaint timber homes, cozy cafés, and boutiques along the cobblestone streets. Stengade is the main pedestrian thoroughfare, with numerous narrow alleyways leading to more shops and restaurants. Beyond its pleasant town center, Helsingør is home to the colossal Kronborg Castle, a UNESCO World Heritage site located just across the harbor. The Renaissance-era castle, which once housed the Danish royal family, is best known as the setting of Shakespeare’s “Hamlet.” Kronborg’s ornate interior and pristine gardens are open to visitors year-round, but be sure to check opening hours since they vary by season. Summer is an ideal time to visit, as the gardens are in full bloom and the castle becomes the stage for live performances of “Hamlet.” The audience is encouraged to interact with the play’s protagonists and tour the castle’s chambers during the show, which runs from June through August. Located just 40 minutes from Copenhagen by train, Helsingør is a popular day trip from the Danish capital.

Our Pick for a Hotel in Helsingør: Marienlyst Strandhotel 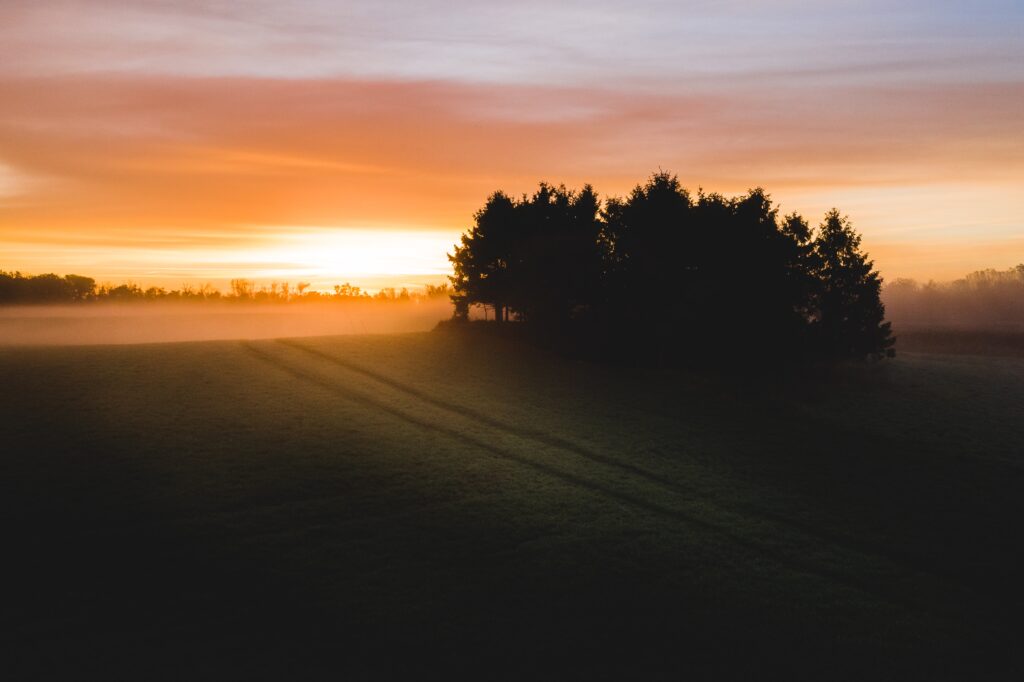 Located just 30 kilometers west of Copenhagen, Roskilde is a dynamic destination for its size. On one hand, the coastal town exudes historic charm and Viking heritage, while on the other, it hosts one of Europe’s largest summer music festival — the Roskilde Festival. The eight-day festival runs from late June to early July and draws visitors in the hundreds of thousands for international acts like Cardi B, Robyn, and Vampire Weekend. If your visit doesn’t coincide with the festival dates, you can still get your music fix at the Ragnarock Museum, where interactive exhibits highlight the evolution of rock and pop music since the 1950s. The town center and its main sites can be easily explored on foot, including the shops along pedestrian-only Skomagergade, Roskilde Cathedral, and the Royal Mansion’s Museum of Contemporary Art. Just north of town, the Viking Ship Museum features an impressive collection of artifacts and exhibits, including five Viking ships that were excavated from the seabed of the Roskilde fjord. Visitors can test their sea legs and board replicas of these five ships in the adjacent harbor. 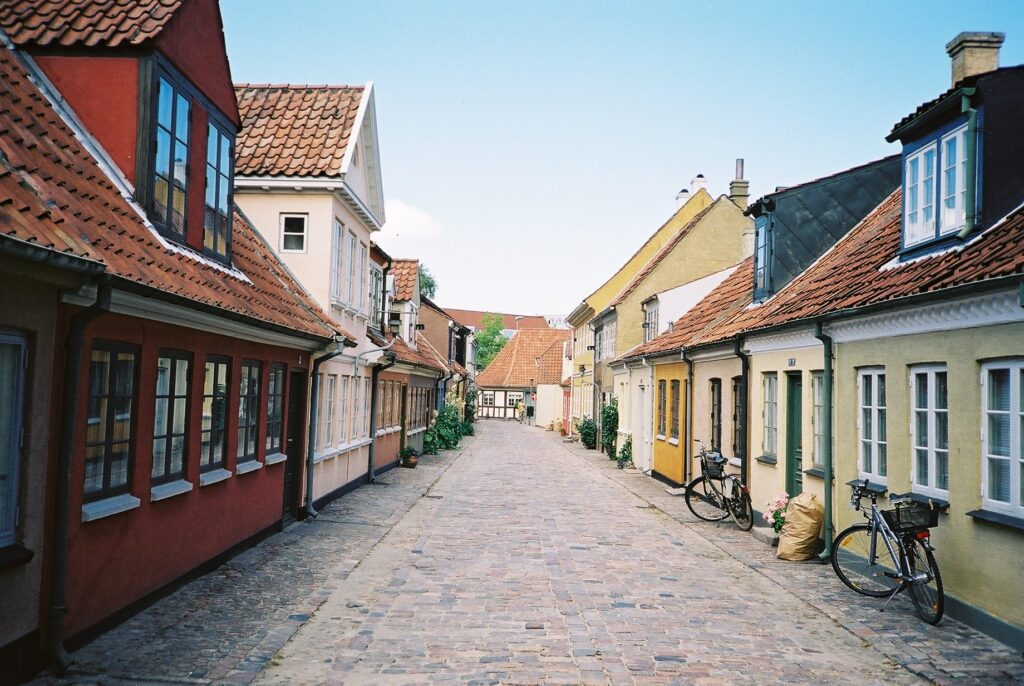 Denmark’s third-biggest city still flies under the radar among international visitors, save for Hans Christian Andersen fans. The famous author grew up in Odense, and as one might suspect, there are a plethora of attractions paying homage to him and his fairy tales. For starters, the H.C. Andersen Museum showcases more than 32,000 items from the writer’s life and work. Further exhibits await at the H.C. Andersens Hus and H.C. Andersens Barndomshjem museums, which occupy the writer’s place of birth and childhood home, respectively. Together, they provide insight into Andersen’s life through audio recordings, murals, manuscripts, and other artifacts. If you’re traveling with kids in tow, be sure to stop by the Tinderbox Cultural Centre for Children, which offers immersive activities into Andersen’s fairy tale world. There’s more to Odense than Andersen’s folklore, though. Check out the exhibits at the Brandts Arts Complex, Odense Cathedral, Denmark’s premier zoo, and a museum highlighting the life of composer Carl Nielsen.