Travelers who have been to Jamaica tend to have two different answers when asked about the best time to visit. One group focuses on October to early December, when the risk of hurricanes decreases and high season and high prices haven’t hit yet. The other group says any time of year is a good time to travel to the Caribbean island nation. After all, the Jamaican coast sees temperatures between 70 and 90 degrees Fahrenheit just about every day. The biggest concern is hurricane season, which stretches from June to November. However, bargain hunters appreciate the low prices during this time period and argue that the potential of a downpour exists all year. In case you’re wondering, October is the wettest month in Jamaica (with over six inches of rain) and March is the driest (with about one inch of rain), but heavy storms can occur at almost any time. Below, we put together a guide to what you can expect in each season in Jamaica. 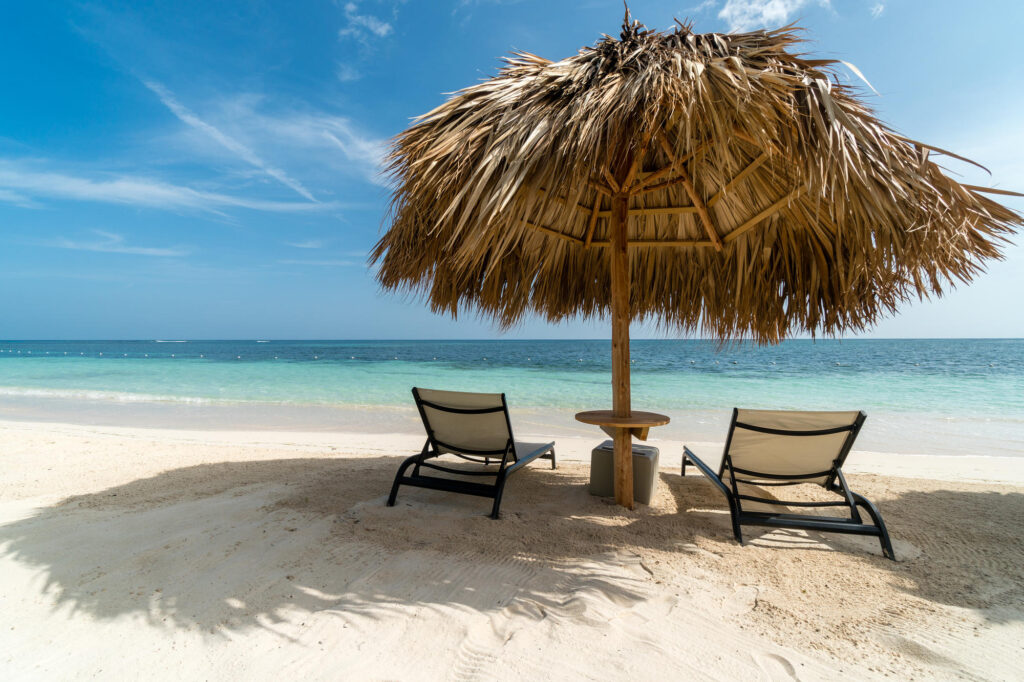 Beach at the Excellence Oyster Bay/Oyster

Most travelers visit Jamaica in the winter (December to March), which closely aligns with the country’s high season. Peak tourist season also means services are running strong, beaches are packed, and prices high. Given the high occupancy rates, you usually need to book two to three months in advance to get a quality resort or hotel.

Even the most populated beaches are still a little more “irie” than those in other parts of the world. Doctor’s Cave in Montego Bay bans radios, footballs, and hawkers, and the changing and showering facilities are clean and well-maintained. Cornwall Beach, which is next to Doctor’s Cave, offers a lot of the same plusses, but is usually less crowded. Negril’s Seven Mile Beach is a little more of a party scene, with glam sunbathers and jerk chicken vendors. Be warned: March is the beginning of spring break season, so expect some more shenanigans than usual.

As for parties, fans of Jamaica’s most famous musicians congregate in Kingston during the first week of February for Bob Marley Week. The events include concerts, lectures, fashion shows, and karaoke contests. The Bob Marley Museum, a simple clapboard house where the musician once lived, is the center of the action. Music lovers can also check out the Bob Marley Birthday Bash concert in Negril.

For Jamaica, high season continues through mid-April. After that, the throngs of people dissipate and the precipitation picks up, from two inches of rainfall in April to four inches in May. The temperatures are still balmy — mostly in the 70s and 80s.

Those interested in a resort getaway may have an easier time finding discount packages during this time. At the top of the stack is the all-inclusive Jamaica Inn in Ocho Rios. Here, all rooms have water views, plus snorkeling, sailing, and spa treatments are included. The Iberostar Rose Hall Suites is a little easier on the wallet and more family-friendly, with a kids’ club, water park, and in-house casino.

While many might not associate Jamaica with world-class links, several construction projects in the last 20 years have built up the island’s golf game. The Tryall Club has been around for several decades and hosted numerous championship players. Cinnamon Hill Golf Course gives players water views on the first nine holes and mountain vistas on the later greens. Plus, the waterfall on the 15th hole made a cameo appearance in one of the steamier scenes from the James Bond flick “Live and Let Die.” In the spring, passionate golfers will have less of a struggle finding a reasonable tee time.

Seasonal events include the St. Elizabeth Horticultural Society Flower Show and the Curry Festival (the latter takes place in Westmoreland and offers numerous interpretations of the signature Caribbean dish, including chocolate curry). The Jamaica International Kite Festival on Easter Monday in St. Ann takes advantage of the winds rising off the bay. 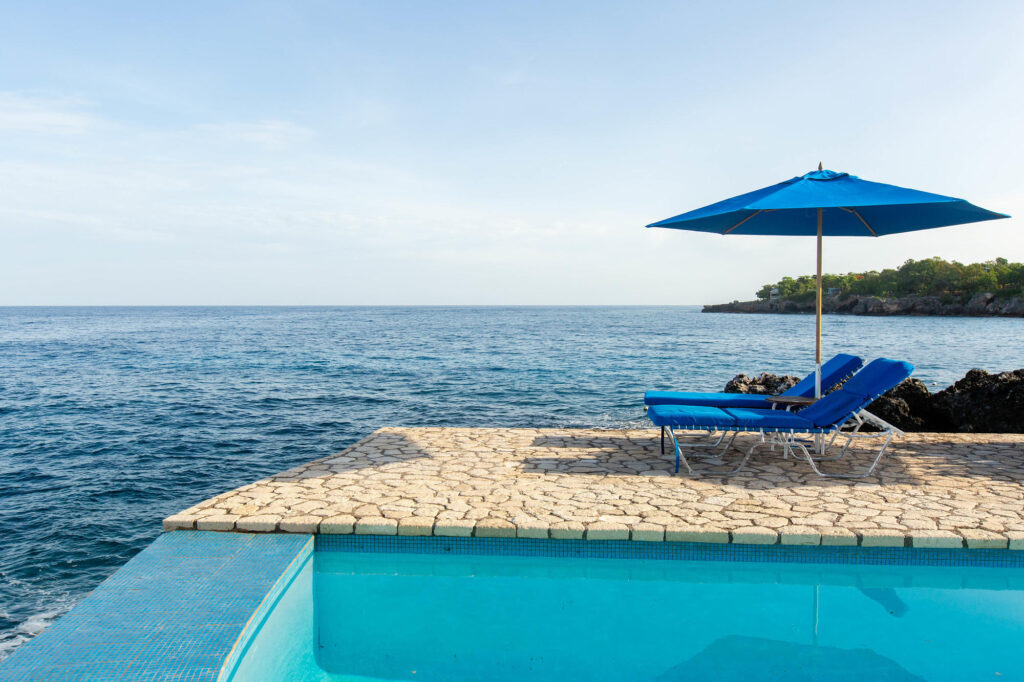 The Pool at the Rockhouse Hotel/Oyster

Many advise staying away from Jamaica during hurricane season. However, others recommend visiting during this time to take advantage of the discounts, which can be as high as 60 percent. Compared with other Caribbean islands, Jamaica was left relatively unscathed by recent hurricanes Irma and Maria. Be sure to check the average monthly rainfall before you book your flight. For example, July brings about two inches, which is as low as April. June and September both see around five inches and August falls somewhere in between. It’s probably best not to write off the entire season, but choose wisely. If you decide summer is the right time for your visit, consider investing in trip insurance.

The argument for visiting Jamaica in the low season is compelling. Beaches are uncrowded, hotel rooms are available and discounted, and the temps range between the low 70s and high 80s. You can walk into top tier restaurants and score a table and reserve tee times at your leisure. That said, keep in mind that without steady crowds, hotels operate on skeleton crews, and many wait until low season to do construction. Some vacationers sit through half-hour rain showers and enjoy long, sunny days, while others spend entire afternoons sitting in their hotel room and staring at torrents of water pelting the sand.

While the Jamaican lifestyle slows down in the summer, the number of festivals increases. In June, Caribbean Fashion Week attracts artists like Ashanti and models like Alicia Burke to Kingston. In July, Jamaica’s largest concert, Reggae Sumfest, comes to Montego Bay. Black River Day is a massive street festival that takes place in late July and celebrates the August 1st Emancipation Day. Later in August, the World Reggae Dance Championship showcases a variety of styles. 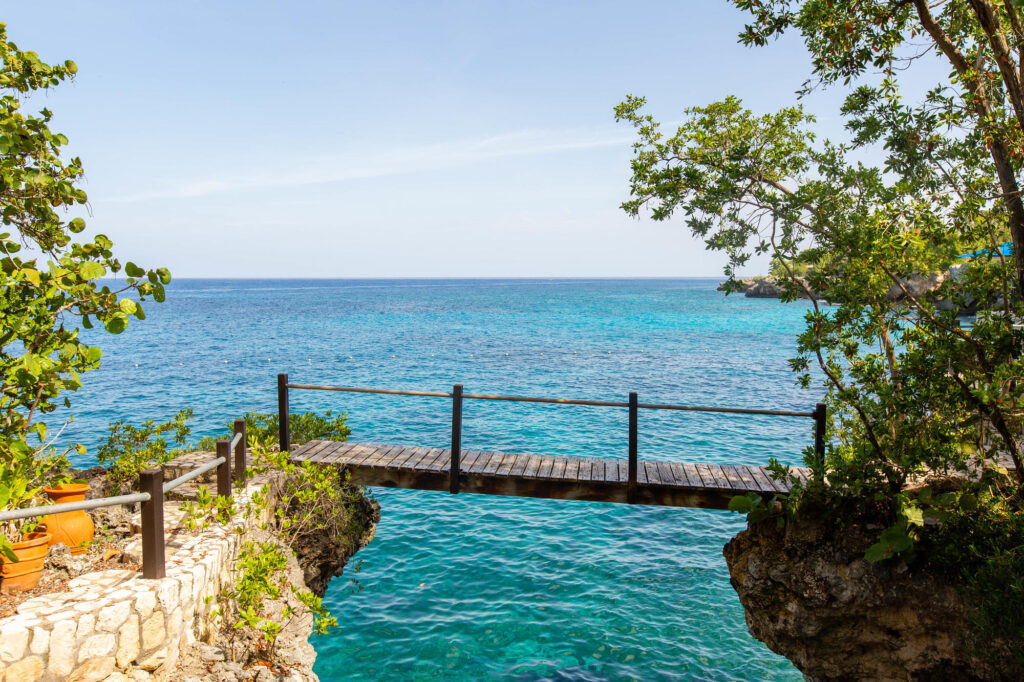 Grounds at the Rockhouse Hotel/Oyster

Autumn is both the best time and the worst time to visit Jamaica. The temperatures still range between the low 70s and mid 80s, but the rain can be at its heaviest. October, in particular, brings over six inches of rainfall, and November and December both see around four inches. Many recommend visiting in late October, November, or early December, when the rain dissipates but the high season crowds haven’t arrived yet.

Like spring, even the good days have a high chance of rain, but the positives outweigh the potential negatives. It’s also a good time of year to enjoy some of Jamaica’s nature beyond the beaches. The Blue Hole in the mountains above Ocho Rios is a popular tourist attraction, and features a waterfall that leads into mountain lagoons for diving and swimming. Dunn’s River Falls, also located near Ocho Rios, is perfect for folks who appreciate a little more splashing whitewater than the calmer Blue Hole.

Nature, adventure, and history fans are all impressed by the Negril Cliffs, where divers leap off rock formations and plunge into the water. Private caves can also be found in the crevices. Many stay in hotels near the drop to soak in panoramic views of the Caribbean Sea.

As for events, there are several marlin tournaments. October also has Heroes’ Day and Restaurant Week (the latter is filled with food specials throughout Kingston and Montego Bay).

Some of Our Favorite Jamaica Hotels

Our Top Pick for a Negril Hotel: The Caves 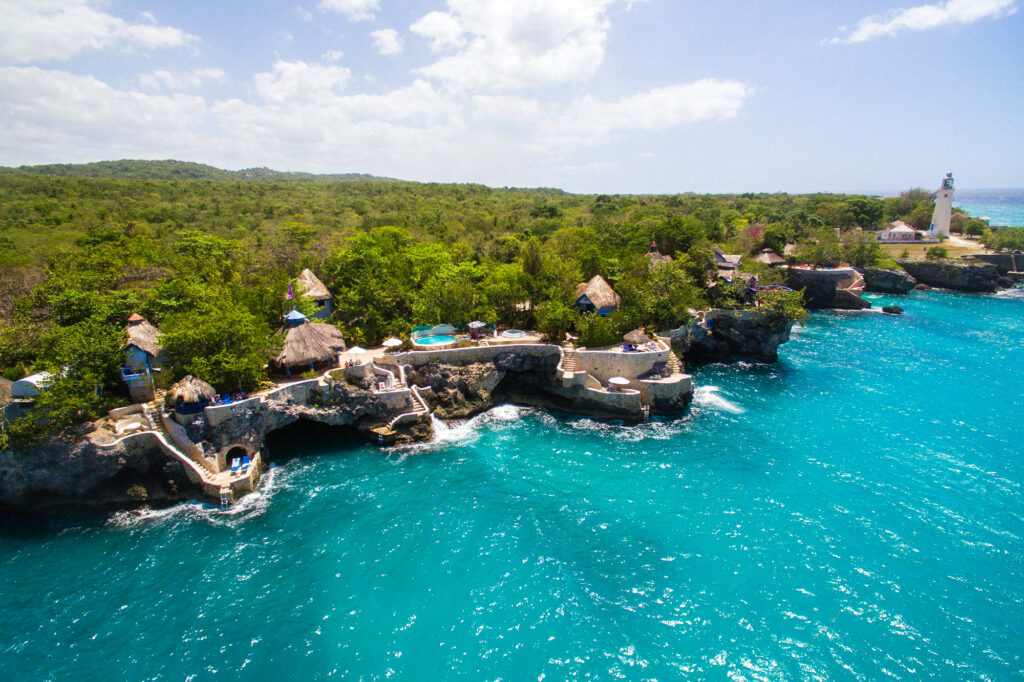 Aerial Photography at The Caves/Oyster

With its upscale boutique vibe, and dramatic cliffside setting, The Caves is considered one of Jamaica’s most romantic escapes. The 12 unique, private cottages and suites at this upscale all-inclusive property unfold along lush garden paths and dramatic seaside cliffs carved with steep stairways down to the water and into incredible grottos. There’s a clifftop bar, a grotto bar, and private candlelit cave dining on offer.

Pricing for The Caves 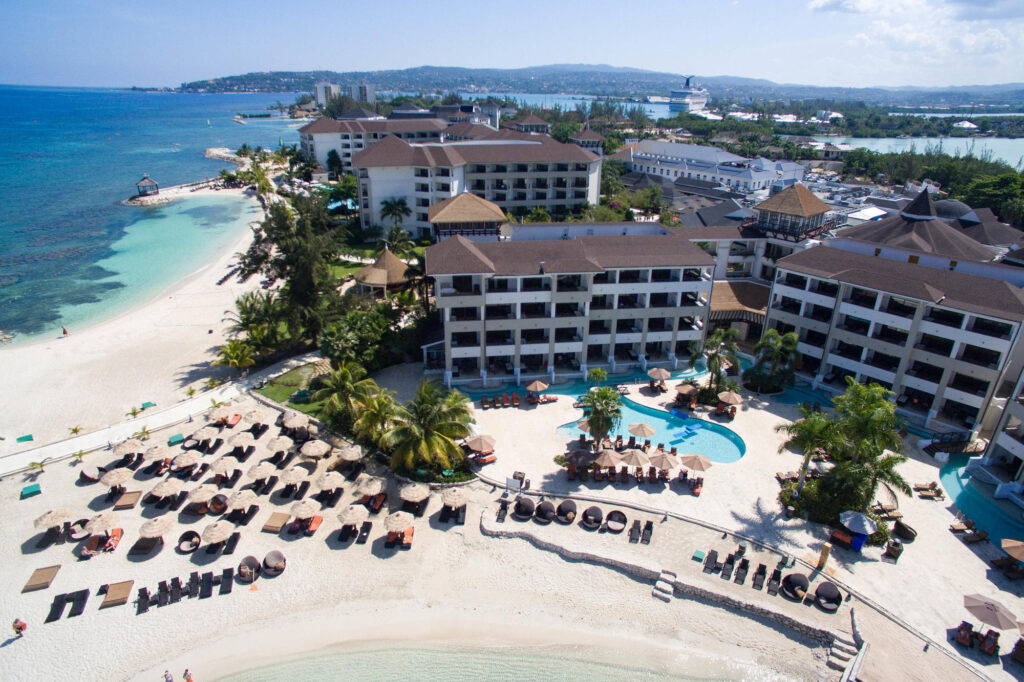 Our Top Pick for a Kingston Hotel: Strawberry Hill 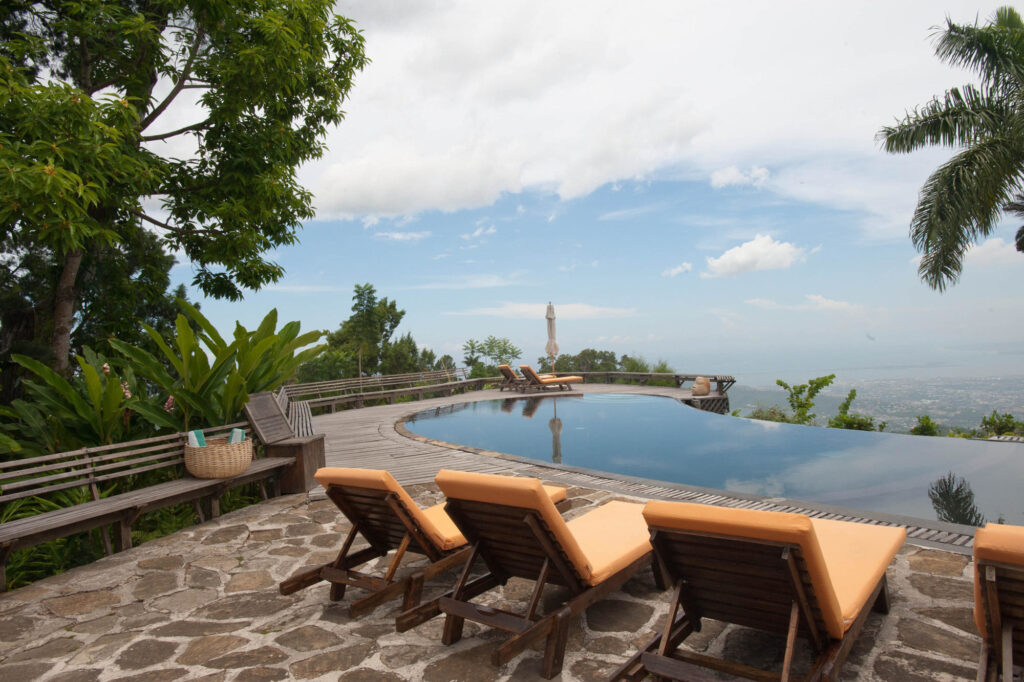 This former coffee plantation nestled among the steep and winding hills of Jamaica’s famous Blue Mountain is a little oasis above the very un-resort-like city of Kingston. The resort offers plenty of intimacy and privacy, with just 12 cottages on more than 26 acres. It also has the features of a larger property: an expansive spa, a breezy restaurant and bar, a hilltop pool with panoramic vistas, lush gardens, and ample relaxation space.

What to Pack on Your Next Trip: Swimwear from Reformation 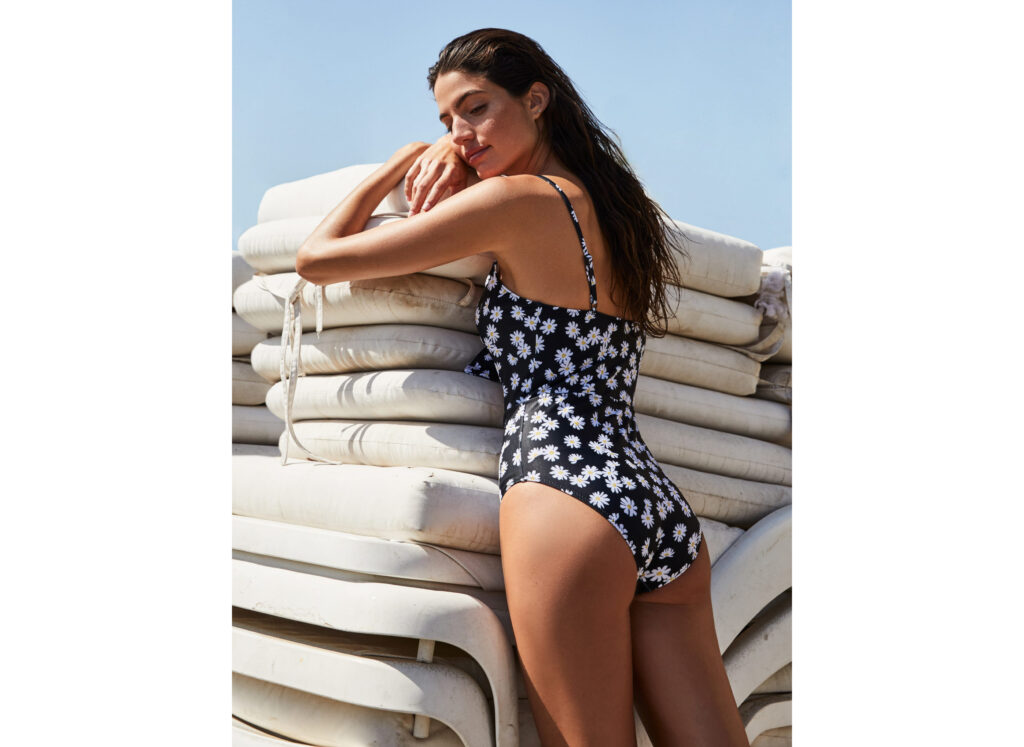 Tropicana One Piece from Reformation

Look and feel great on your next Jamaican getaway with swimwear from the fully sustainable brand Reformation.