Belize and Costa Rica are two of the most popular vacation destinations for Americans who want to travel to Central America -- and understandably so. After all, both countries cater to nature-loving tourists and boast gorgeous beaches, rain forests, boutique hotels, incredible wildlife, water sports, diverse food scenes, stable governments, and pleasant weather. But with all the similarities come some major differences that might make or break your decision on which flight to book. Check out our head-to-head and decide whether Costa Rica or Belize is a better vacation spot for you.

Getting There and Safety

Belize is a small coastal country that shares its borders with Mexico to the north and Guatemala to the west. The coast (Belize is the only Central American country without a Pacific coastline) meets the Caribbean Sea and there are several small uninhabited and populated cays off the shore that are accessible by plane or boat. As far as accessibility, it’s only a two-hour flight from Miami to Belize City. Plus, American, Southwest, Delta, and United all offer direct flights from the United States to Belize City. However, there’s little for tourists to see or do — not to mention, the city is dangerous at night — so most of them immediately get on a boat, in a car, or on a smaller plane and head to Placencia, Caye Caulker, Ambergris Caye, or Cayo District. Tourists can stay in the country for 30 days without a visa, but are required to show proof of departure, such as a plane ticket. There’s a safe and cheap bus system for getting around, but most visitors rely on private shuttle service or rental cars. Belize won its independence from the United Kingdom in the 1980s, and English is the official language. Expect some Spanish and Mayan dialects, especially in the north and in remote villages.

Costa Rica is a bit farther south from the United States. It’s about a three-hour flight from Miami to San Jose, but airfare is likely to be cheaper than what you’ll find for Belize. Major carriers like American, United, and Delta all offer direct flights, and there are major deals to be found on low-cost carriers like Southwest, Spirit, and JetBlue. Sandwiched between the Pacific Ocean and Caribbean Sea, Costa Rica is also the larger than Belize, with Panama to the south and Nicaragua to the north. A visa isn’t required, but a passport and proof of departure are mandatory. San Jose isn’t a desirable city for tourists, and downtown has much higher crime rates than anywhere else in the country. However, there are some nice hotels and many tourists are forced to spend the night there before or after a flight. There’s a substantial and cheap bus system for getting around the country, but it’s slow. Rental cars are available, but insurance is pricey and some coastal and mountain towns require a four-wheel-drive vehicle. Spanish is the official language, though many Ticos (native Costa Ricans) in the tourist industry speak excellent English.

It’s worth nothing that both countries are safe. However, the U.S. State Department has declared Costa Rica as a Level 1 country, the lowest advisory level for safety and security risk. Belize was rated a Level 2, which means travelers should be aware of heightened safety and security risks — likely due to the occasional gang activity in Belize City that doesn’t usually impact tourists. As a reference check, note that the United Kingdom and France are also ranked at Level 2.

To sum it up: Belize is faster to get to and its small size makes traveling around in the country pretty easy, but flights from the U.S. cost more. Costa Rica has longer, cheaper flights, but getting around the larger country takes more time and planning.

As stated above, Belize is just working with the Caribbean Sea. But what the small country lacks in white sand (which you’ll mostly find in Placencia), it makes up for with easy access to several scenic off-shore cays as well as a 190-mile-long section of the 560-mile Mesoamerican Barrier Reef. Belize is one of the safest places to become PADI-certified, and divers congregate from around the world to dive with reef sharks in the Blue Hole, made famous in the ’70s by Jacques Cousteau. Whale sharks can be spotted from March through June. Snorkelers can take day or morning trips to see stingrays, turtles, and schools of tropical fish — then have a barbecue with rum punch on an uninhabited cay. On Caye Caulker, there’s a sandbar called The Split where locals and visitors rent paddleboards, swim in clear water, and sip Panty Rippers at sunset (coconut rum and pineapple juice).

Costa Rica is a world leader on sustainable tourism and prides itself on the care of its memorably beautiful beaches. The strong surf of the Caribbean and Pacific offers some of the best surfing conditions in the Western Hemisphere for beginners and pros. Surfboards are as common as green juices in Nosara, a Tulum-esque beach town on the Nicoya Peninsula. Depending on the time of year and weather, the water can be too rough for swimming. As an alternative, Manuel Antonio offers calmer shores and white-sand beaches that are safe for families. All beaches in Costa Rica are open to the public (though a few are partially private thanks to geography and architecture). You’ll definitely find vendors selling coconuts, T-shirts, and empanadas on the sand but it’s not aggressive, like in Cancun.

To sum it up: If you want to surf or lay on the sand, pick Costa Rica. If you’re all about diving and snorkeling, Belize is your country.

Some experts believe Belize was the heart of ancient Mayan civilization (with up to 400,000 Mayans, compared to today’s Belizean population of about 367,000 people). Today, remnants of the vast empire are easily accessible throughout the country. Ruins and temples of varying degrees of construction are scattered everywhere, from the cays to the border of Guatemala. At 133 feet tall, Xunantunich is accessible by ferry off the Western Highway. Mopan, Kekchi, and Yucatec Mayan descendants still live in traditional villages and speak a local dialect. Belize also has proud Mestizo and Garifuna populations. Formerly known as British Honduras, Belize was granted independence from the British crown in the 1980s and still retains an aura of stiff-upper-lip civility and order.

When the Spanish arrived, there were around 20,000  Bribri, Boruca, and Maleku natives living in the area. Today, Costa Rica’s culture is more impacted by its diverse ecosystems and geography than it is by its peoples. Ticos are often dubbed “the happiest people in the world” and the government does an excellent job at protecting the nation’s natural beauty and animals. Development isn’t allowed on the beach, so you won’t find towering hotels and crowded restaurants on the sand, or even much litter or pollution. It’s also known to be an extremely peaceful nation, and hasn’t had a national army since 1948.

To sum it up: Belize is a small country with many cultural influences and an overall British cadence. Costa Rica offers a peaceful and generally happy population that cares deeply about the environment.

Brace yourself: there aren’t any American chain restaurants in Belize — not even a McDonald’s. A coffee shop with suspiciously familiar green awnings serves Starbucks coffee, but it isn’t a licensed franchise. That said, Belize offers an incredible chance to sample local cuisine. Most tables are set with a bottle of Marie Sharp’s hot sauce (excellent souvenirs that are sold everywhere) and a jar of homemade pickled chilis. These are used to flavor the morning meal of fry jacks, rice, beans, and eggs. Fried corn tortillas with beans and tamales show up for breakfast, lunch, and dinner. Seafood dishes like lobster, conch, and ceviche are popular, especially on the coast. For drinks, local rum is mixed with fruit juice and Belikin is the preferred beer.

Costa Rica has all of the American chain restaurants you might expect, though these are mostly found in San Jose. Hard Rock Cafe, Hooters, McDonald’s, Burger King, and Starbucks are all available. Thanks to expats and the hordes of yogis and surfers who come here regularly, there’s also plenty of healthy fare to be found in Costa Rica, especially near the beaches. Green juice stands, smoothies, vegan options, and fresh fruit are common. Sodas, small restaurants serving Costa Rican food, are the cheapest and most satisfying way to eat local items like empanadas, spiced chicken with rice, fried plantains, and gallo pinto (rice and beans).

To sum it up: Belize doesn’t offer American restaurants, but it does have fresh and interesting Caribbean- and coastal-inspired cuisine. Costa Rica focuses on fresh and healthy fare, and it’s easy to find affordable and flavorful local food.

Just like you won’t find the golden arches in Belize, you won’t find many chain hotels or all-inclusives either. And we think all the locally owned boutique hotels are a good thing, but it does drive prices up. Even budget hotels can be a bit pricey, with some two-pearl properties priced in the high double digits. Pedro’s Hotel is a well-known party hostel with some of the lowest rates and best pizza in San Pedro. Francis Ford Coppola’s famous Turtle Inn is a favorite for honeymooners in Placencia, thanks to its lovely stretch of white sand and authentic Thai spa.

San Jose, Costa Rica, has a plethora of airport and chain hotels, mostly catering to business travelers, locals, and those in transit. But once you get away from the capital city, the country’s hotel stock offers everything from affordable tent cabins at Ylang Ylang Beach Resort to the five-pearl Four Seasons Resort at Peninsula Papagayo with two beaches and an Arnold Palmer-designed golf course. Many hotels on the Caribbean coast cater to groups of yogis and host wellness retreats.

To sum it up: Both countries offer hotel options that range from bare-bones to ultra-chic, but Costa Rica has cheaper rates and more American chains. 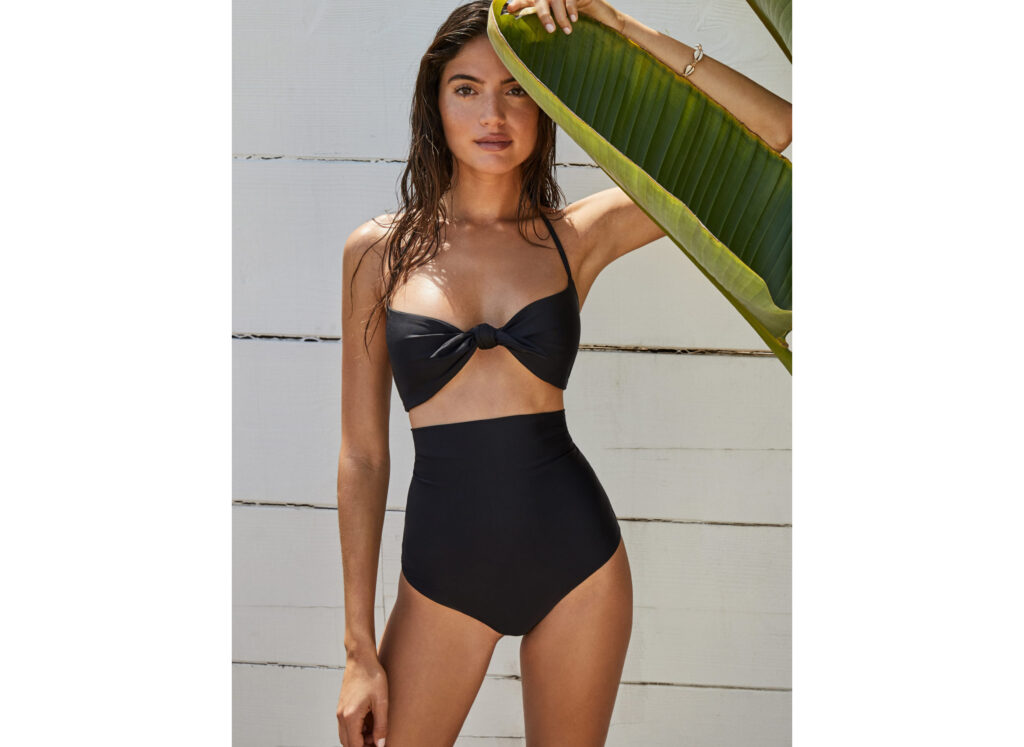 No matter where you head, whether it be Belize or Costa Rica, shop beautifully and sustainably for your next trip with a swimsuit from Reformation.

NOW WATCH: The Most Underrated Places to Travel in 2018